China’s media widely covered what it saw to be Europe’s failings in the battle against Covid-19. Yishu Mao and Jianyin Roachell say this has helped Beijing – and will change relations.

The Covid-19 pandemic has damaged the image of European countries in the eyes of the Chinese public. China’s media coverage of the health crisis in Europe has not been short of examples of failures by European governments to contain the virus, and of stories about European citizens discriminating against people with a Chinese or other Asian backgrounds. Europe from now on will likely encounter a more confident China eager to promote its system at home and abroad – and a Chinese public less eager to visit or study in Europe. 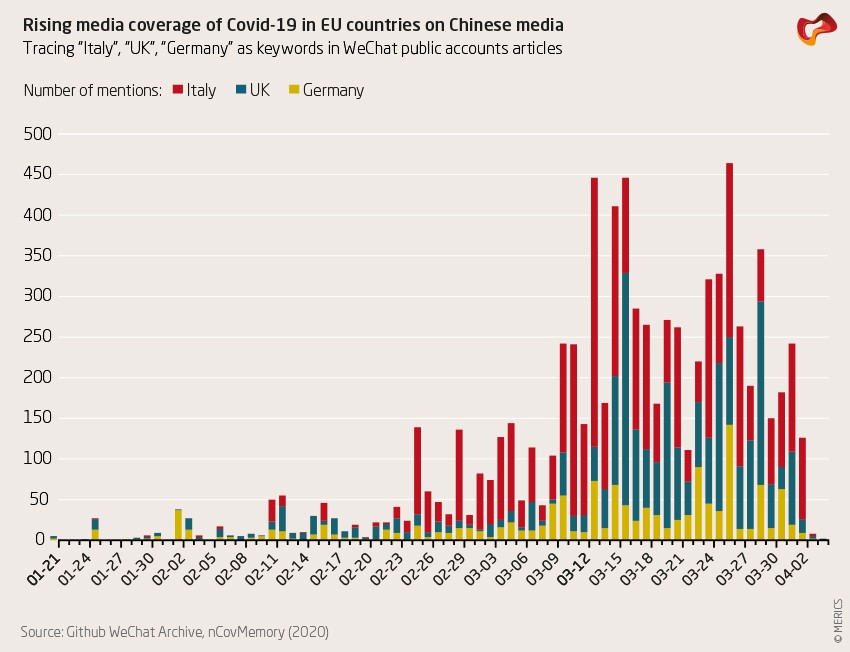 We analyzed a database of about 4000 articles about the pandemic published on WeChat by a group of GitHub users based in China. The volunteer archivists were later placed under arrest and their database removed from the open-source platform. Our research shows that most media, whether party-state, grassroots, or commercial, depicted chaos in Europe in a highly alarmist manner. Words like “severe” (严重) and “urgent” (紧急), for example, were the most prominent adjectives associated with Germany, Italy, Spain and the UK.

Chinese state media used the initially faltering crisis response of some European countries to criticize their political systems. An article in News China (中国新闻周刊), for example, was headlined “Italy led Europe into the darkest moment” and attributed the country’s escalating epidemic to bad coordination in a decentralized state. Italy’s having “not taken unified measures to control the epidemic” was seen as the result of inconsistent decisions in “a national governance system” of “20 districts, 98 provinces and 8099 municipalities” and “a four-level national administrative system of center-region-province-city.”

The “herd immunity” strategy initially floated by the British government stirred as much criticism in China as in other countries. Chinese state media described it as “bloody,” “an idea from a hundred years ago” and “surrender policy.” An article in a commercial paper, “After the failure of the ‘group immunity,’ Westerners have taken new – and this time even crueler – steps!”, claimed: “The answer China found [to the pandemic] is always to prioritize people ’s safety and lives.” It accused European countries and the USA of being slow to lockdown and eager to get back to work because of their “focus on the interests of capital.”

Not only were European governments described as inefficient in managing the health crisis, the EU as a multilateral institution was characterized as divided. For example, the story of German customs authorities blocking the export of a truckload of face masks to Switzerland as a part of the wider ban on exports of protective gear was widely reported. Another article referred to similar measures on the part of the French and Italian governments. The author noted by way of concluding: “These actions caused a lot of anger. At the meeting of health ministers in Brussels on Friday (6th), the tension between the EU countries was obvious.”

It may not be surprising that state media pushed narratives like that, but we found similar ones in some grassroots media. For example, reports that young people in Germany and other European countries were ignoring restrictions and throwing “corona parties” caused a stir on China’s WeChat. “They have enjoyed too much freedom,” one user commented. “This kind of freedom is so selfish and it’s not different from suicide.” The story of a man in Catalonia ignoring restrictions to walk his goat also provoked mockery in China. “People in France should learn from the Chinese,” an article quoted a French doctor as saying, encouraging his countrymen to be as dauntless in lockdown as the Chinese.

In addition to posting and commenting news, Chinese students studying in Europe used WeChat to write about their experiences. A large number from the UK posted pictures of empty supermarket shelves and aired their fears about the UK’s early talk about herd immunity. Many complained they had faced discrimination from Europeans because they were wearing masks or looked Asian. At least initially, the wearing of masks was taken as a symbol of the cultural divide and ultimately ideological divide between China and Europe.

Nonetheless, Chinese media also differentiated between European countries depending on how they performed during the crisis. Germany was widely deemed as having the best crisis management. The news that US President Donald Trump had tried to buy the rights to a possible Covid-19 vaccine from German company Cure Vac was widely reported by grassroots media. This coverage also threw a light on Germany’s advanced research capacity.

The Chinese government faced immense pressure about its handling of the crisis both at home and abroad in the early days of the outbreak. But our research shows how it successfully used China’s news media to turn the focus of public narratives in China to failings elsewhere in the world. By presenting Europe’s failings as Covid-19 spread across the continent, it implicitly presented itself as a capable and responsible actor as a way to convince its domestic audience that Beijing hadn’t done such a bad job after all.