Under China’s party and state leader Xi Jinping a few central organizations have evolved to become the true nerve center of the Chinese Communist Party (CCP). These so-called Central Commissions and Leading Small Groups constitute the political core executive and give the central leadership around “core leader” Xi significant influence over strategic policymaking. By positioning himself and his aides in leadership positions of this core executive, Xi has become the most powerful leader since Mao Zedong. Xi has redirected authority over crucial issues back to the inner circle of the party, and stronger central steering has replaced the more decentralized policymaking approach of his predecessors, Jiang Zemin and Hu Jintao. The stated goal of this more centralized governance is to strengthen Communist Party rule, and to turn the Chinese party-state into a modern, disciplined, and efficient administration. 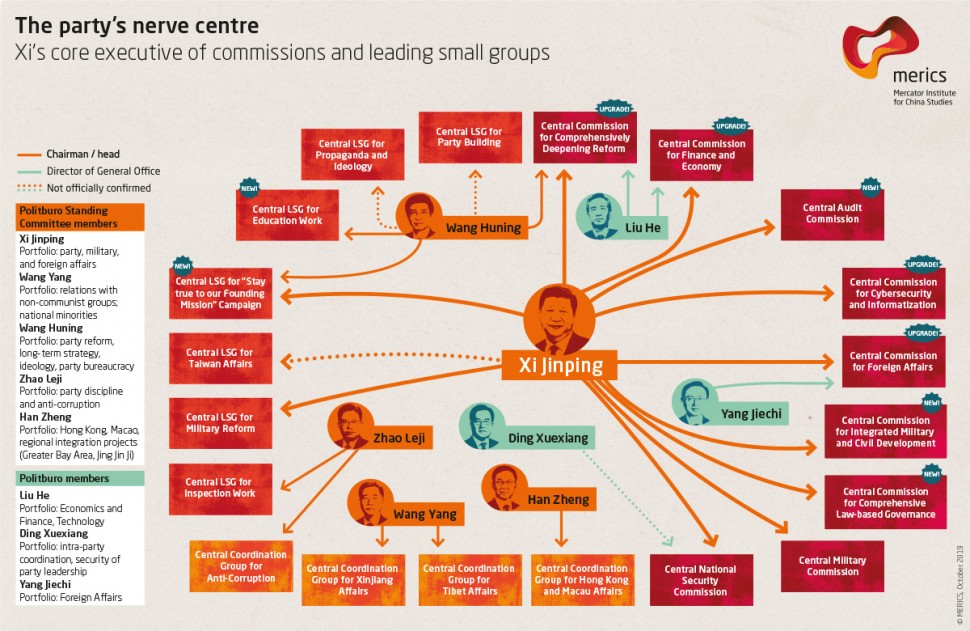 To achieve this goal, Xi has put himself in charge of multiple policy areas – although he is very much aware that he cannot tackle all tasks on his own. For swift and thorough implementation, he relies on a powerful network of entities within the CCP hierarchy, the Central Commissions and Leading Small Groups (LSGs). While Commissions work as decision-making institutions for fixed policy areas, LSGs allow the party to deal with novel and pressing issues in a timely and interdepartmental manner, cutting across otherwise fragmented bureaucracies. Focusing on specific policy areas, each LSG makes sure party decisions within its purview are implemented across the bureaucracy. Lastly, four so-called Coordination Groups are in charge of driving and supporting political work on more specific topics – like anti-corruption and regional matters - that require central-level authorizations.

Xi sees himself on a mission to restore the former glory of the CCP. He believes strong party leadership is the key to overcoming the complex problems and challenges China is facing today. Examples range from restructuring the economy, modernizing the military, improving information and cyber security, and boosting discipline and ideology, to rendering public administration and services more efficient. While actively involved with the reforms of the party and the significant structural reforms that were launched at the Third Plenum of the 18th CCP Central Committee in March 2018, Xi now strongly relies on the support of the strengthened core executive of top-level coordinating bodies he created.

Xi upgraded four LSGs to Central CCP Commissions, signifying the topics they focus on are now fixtures on the political agenda. This and the fact that they are headed by Xi himself institutionalizes their status within the party hierarchy and China’s overall political system, increasing their importance for policymaking. Mirroring his own political priorities, Xi Jinping chairs eleven LSGs and Commissions, more than any leader since Mao. This gives him substantial influence over policymaking about issues covered by them - national security, auditing (financial and administrative compliance), legal reform, development of the defense sector, military reform, information and cyber security, foreign affairs, and ideological control.

Importance of LSGs and Commissions is defined by who leads them

The political clout of an LSG or a Commission depends on the position of the person chairing it. Leaders are appointed by rank and political authority - and in some cases also because of specialized expertise. LSGs and Commissions exist in large numbers and at all levels of the Chinese system, as they often need to overcome decision-making bottlenecks about issues with implications for a number of administrative sectors.

At the level of the central CCP leadership, we identified 20 bodies headed by five of the seven members of the Politburo’s Standing Committee at the time this research was conducted (see graphic above). The two members missing from the graphic, Premier Li Keqiang and National People's Congress Chairman Li Zhanshu, do not chair any central party groups, but are leaders of LSGs and Commissions under the State Council, China’s main administrative authority. Besides the members of the powerful Standing Committee, a further three of the Politburo’s 25 members play important roles as aides to Xi. Depending on their political portfolio and technical expertise, they act as directors general of the general offices of the Leading Small Groups, and are in charge of compiling meeting agendas and proceedings. Xi Jinping has become an extremely powerful leader, but observers of China’s political system need to be aware that they should not focus solely on the figure Xi, but also the network of organizations and aides supporting him as core leader of the CCP.