Challenges and opportunities for German actors

China’s leadership has set an ambitious deadline to become a superpower in science and technology innovation by the 100th birthday of the People’s Republic in 2049. The digitalization of industrial production is central to their ambition. Digital platforms in the manufacturing sector are considered crucial to upgrade industry, improve productivity, optimize resource allocation and increase employment.

Other countries can benefit, especially Germany, with its strong industrial base and rich experience in the realm of “Industrie 4.0”. German companies like Siemens, SAP and Bosch are already engaged in China’s emerging digital industrial platforms economy. However, European actors must brace themselves for challenges. The competition is on: China will be a major contestant in the “battle for industrial data”, as EU Commissioner Thierry Breton recently coined the new phase of digitalization, in which Europe hopes to gain a stronger foothold after being outperformed by US and Chinese tech companies.

"China is investing heavily to become a leader of the Fourth Industrial Revolution. European actors must brace themselves for challenges."

China is investing heavily to become a leader of the Fourth Industrial Revolution; spending on IT technologies reached CNY 2.6 trillion (EUR 337 billion) in 2018, research and advisory firm Gartner has estimated. Software and data center systems accounted for CNY 250 billion (EUR 32 billion) of this. Government policy pressure will see more companies invest in the Internet of Things. Market observers estimate that China will account for one third – 4.1 billion – of global Industrial IoT connections (IIoT) by 2025.

Chinese digital industrial platforms are starting to compete on a global level. One of the most important is INDICS, set up by China Aerospace Science & Industry Corporation Limited (CASIC), a state-owned missile manufacturer under direct central government control. Two other corporate giants have set up increasingly influential platforms: Haier, the appliances and electronics manufacturer, and Alibaba, the internet retail giant.

The scarcity of advanced manufacturing in China is a key reason for the gulf between industrial digitalization and flourishing consumer oriented service platforms such as video-sharing hub TikTok, the e-commerce portal Taobao and Tencent’s WeChat ecosystem: the enterprise-on-cloud rate in China was only 30.8 percent in 2018, compared to 50 percent in the US and 73 percent in Germany, all reported for 2018, according to a Chinese survey. 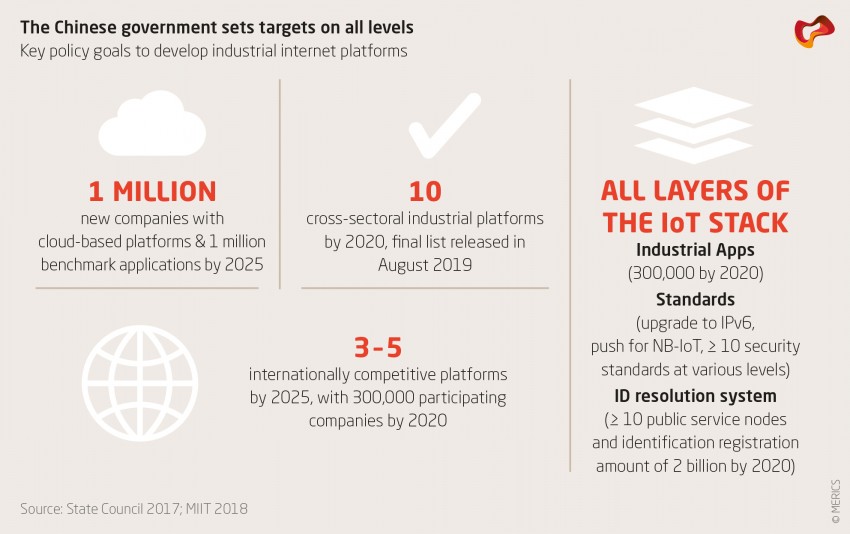 The main player orchestrating digital industrial platform development is the Ministry of Industry and Information Technology (MIIT). In 2018, MIIT published its first ever list of 93 industrial internet projects in a comprehensive effort to build, scale up, regulate and standardize China’s platforms. The Ministry of Finance (MOF) funded the first batch of projects with CNY 4.9 billion (EUR 679 million).

MIIT presides over the Alliance of the Industrial Internet (AII), the major forum for interaction between policy makers and industry. The AII was created in 2016 and has more than 1,300 members. The AII’s few foreign members include SAP, Siemens, Schneider Electric and GE. The body is active in setting technical standards for China’s industrial internet platforms.

State-owned enterprises (SOEs) are tasked with generating sector-specific platforms. For instance, a unit of oil giant Sinopec has set up a platform for the petrochemical industry.

The result: A state-led industrial platform landscape is emerging fast

Three push factors are combining to shape the industrial digital platform landscape: government strategy is driving work by giant SOEs in key sectors; private sector firms have joined in; and ICT giants are venturing into B2B to counteract stagnating user growth in their B2C strongholds.

Among the most successful private sector players, Haier’s COSMOPlat combines 12 industries from textiles to electronics and ceramics and claims to serve 35,000 companies with 320 million end-users. ICT companies like Alibaba, Tencent, Huawei and Baidu seek to leverage data from a massive pool of internet users: using consumer behavior data to optimize industrial design and production is a core feature of Industry 4.0.

Some Chinese ICT players will benefit from their strength in cutting-edge applications. Baidu’s Apollo, the world’s first open-source autonomous vehicle technology platform, has over 130 corporate partners, including major German carmakers.

Nonetheless, China’s own analysts openly debate weaknesses in this mass of activity. Their views are consistent with MERICS own research. China’s structural dependence on key foreign components like industrial software is a fundamental deficiency that provides opportunities for foreign companies.

Obstacles to Chinese companies engaging in the IIoT include the lack of interoperability standards and insufficient rules on data ownership and security. China’s regulators therefore want more robust technical standards and a basic industrial internet standardization system by 2020.

Most of China’s 324 industrial internet standards are still awaiting formulation. The AII has judged platform standardization work in China as “early stage”. Standardization is an area in which foreign actors could and should engage with China. 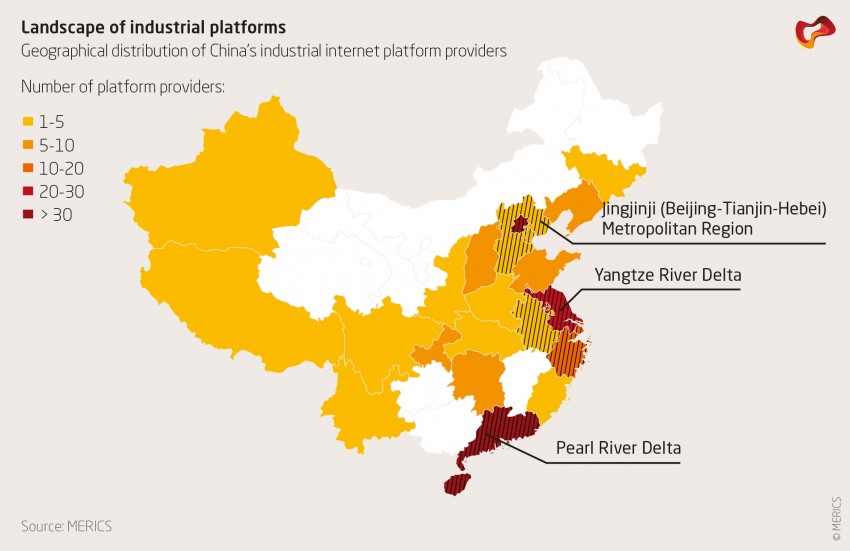 China’s official rhetoric proposes an open digital platform economy that is cross-border and “win-win” in nature. It is not currently pushing for outright self-sufficiency, or a model decoupled from developments in other countries that would result in the exclusion of foreign actors.

Many digital platforms analyzed in our study have benefited from strategic partnerships with foreign companies like Siemens, Bosch, SAP or GE and foreign research. Even so, China’s constant theme is the need for strong domestic capabilities that advantage its firms vis-à-vis foreign competitors.

The implications for Germany: exploring opportunities and mitigating risks

Germany is a key partner for China in developing an Industry 4.0 of its own. German companies and institutions play an important facilitating role in China’s work to create digital industrial platforms, with joint research and development projects the main form of cooperation. E.g.:

Opportunities for German platform providers to offer services to Chinese customers are far more limited. However, they could arise in the areas of use and integration of sensors, device connection and “software as a service” solutions.

This MERICS study is based on a deep search and analysis of primary Chinese language sources with data as of December 2019. We made a systematic analysis of official policy documents since 2015, Chinese experts’ research papers and interviews with and feedback from 25 experts from politics, the corporate sector and research institutions. 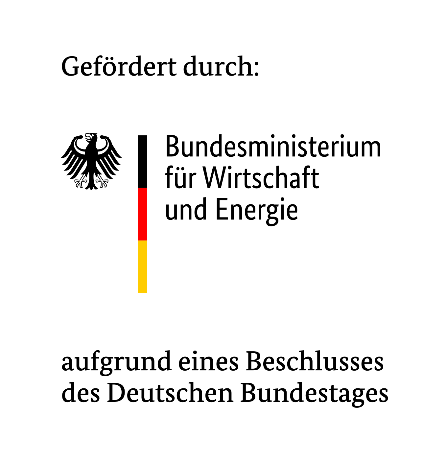