Mapping the Belt and Road initiative: this is where we stand

When China’s party and state leader Xi Jinping first announced his plan for a “Silk Road Economic Belt” and “21st Century Maritime Silk Road” in the fall of 2013, the concept sounded vague and its content was difficult to interpret. While this remains true in many respects, the “Belt and Road Initiative (BRI),” as the overall policy is now called, has since been fleshed out somewhat in two policy documents. In these documents, the Chinese authorities define broad and very ambitious goals: Beijing wants to connect participating countries’ infrastructure, but also encourage them to open their markets to China and facilitate trade, to link their financial markets to China’s, to strengthen societal (“people-to-people”) relations, and even align their overall economic development policies with China’s. Projects on the ground are the best indicator for how Beijing aims to achieve these goals.

Five years since the launch of the project, China has invested more than 70 billion USD into BRI-related infrastructure projects according to the MERICS BRI database. Not included are projects still under construction or in the planning phase, which involve much larger investment volumes. The map below shows railroad, pipeline and port projects. Projects in these areas usually receive the highest media attention, but do not necessarily involve the largest investments. The MERICS BRI tracker, an ongoing series of analyses and mappings, therefore also keeps track of investments into sectors such as power generation and transmission, as well as digital and financial infrastructure, amongst others.

The BRI has a growing security component

It is clear by now that the BRI is about much more than gaining market access and shares, securing trade routes and energy supplies as well as exporting Chinese industrial overcapacities to far-away construction projects. The initiative is a key part of Xi Jinping’s grand foreign policy design to increase China’s influence in its regional neighborhood and beyond.

Over the past year, three themes have emerged that provide the context for Xi’s signature initiative: the BRI is a long-term project, it has a global scope, and it is not limited to economic goals, but also has a growing security component.

First, the BRI is here to stay. Initial doubts about the initiative’s longevity have been dispersed. In the fall of 2017, the BRI was introduced into the Chinese Communist Party (CCP) constitution. The CCP is also ensuring a flow of financing into BRI projects. Even as it introduced capital controls that make it harder for Chinese companies to invest abroad, it still channels funds into specific sectors and regions – and BRI policy goals are a strategic priority. The excessive debt levels of many target countries receiving Chinese loans have, however, sparked concerns about the BRI’s financial sustainability and have made mobilizing private investments and commercial lending a priority for Beijing.

The geographical scope of the BRI is constantly expanding

Second, rather than remaining limited to initial target regions along historic land and maritime routes between China and Europe, the geographical scope of the BRI is constantly expanding. Last year, the “Vision for Maritime Cooperation under the Belt and Road Initiative” introduced a new so-called economic passage through the Arctic to Europe (as marked in the map above). Beijing also signaled its intention to further expand the BRI into Latin America. The increasingly global scope of the BRI underlines that Beijing uses the initiative as a vehicle to frame and market its overall foreign policy. MERICS’ tracking efforts reflect this trend.

Third, BRI is no longer limited to economic goals. The “Vision for Maritime Cooperation” includes a sub-chapter devoted to security issues as one of Beijing’s cooperation priorities. In view of China’s ballooning investments and growing Chinese expat communities in risk-prone countries, Beijing has become convinced that it has to take security concerns along the BRI routes in its own hands. In 2015, China adopted an anti-terrorism law allowing for foreign missions of PLA units, and it opened its first overseas military base in Djibouti, a hub of the Maritime Silk Road. A new industry of Chinese private security companies is rapidly developing, providing protection to BRI projects. Beijing also touts its technological, law enforcement and military capabilities to countries covered by the BRI on security-related issues like satellite navigation, disaster management and combating crime.

The BRI is not without controversy, for economic and political reasons

First, the MERICS BRI database shows an uneven track record as to whether and when projects proceed from the planning and MoU stage. Blanket allegations that China fails to deliver on promised investments have proven to be unfounded. But China found some environments more difficult to operate in than expected, and expectations of fast results were disappointed in many target regions. Many initially enthusiastic governments, such as in Central Eastern Europe, now view the BRI more soberly.

Secondly, the BRI has raised suspicions about China’s global agenda and has provoked increasingly assertive counter-initiatives by other countries. The United States as well as regional powers in Asia and Europe have grown concerned about rising Chinese influence, partly built on Beijing’s propaganda outreach, partly on concrete infrastructure outcomes. Japan presented the “Expanded Partnership for Quality Infrastructure” (2015), and together with India launched the “Asia-Africa Growth Corridor” (2017). Joined by the United States and Australia, these countries now discuss harmonizing their efforts within the so-called “Quad,” initially a security dialogue format. The EU is working on a response strategy, which will likely be presented in October 2018. Lastly, Russia put forward its own “Greater Eurasia” economic integration concept with the aim to include member states of the Commonwealth of Independent States, the Shanghai Cooperation Organization, and potentially ASEAN countries.

Building on a database that already contains more than 1,500 project entries – only projects above a 25 million USD project value threshold are included – MERICS aims to continuously monitor all these developments. In the months and years ahead we will publish a series of analytical pieces highlighting successes, failures and consequences of China’s BRI-related activities. Several thematic and regional maps will illustrate these articles and complement the above-shown BRI map. 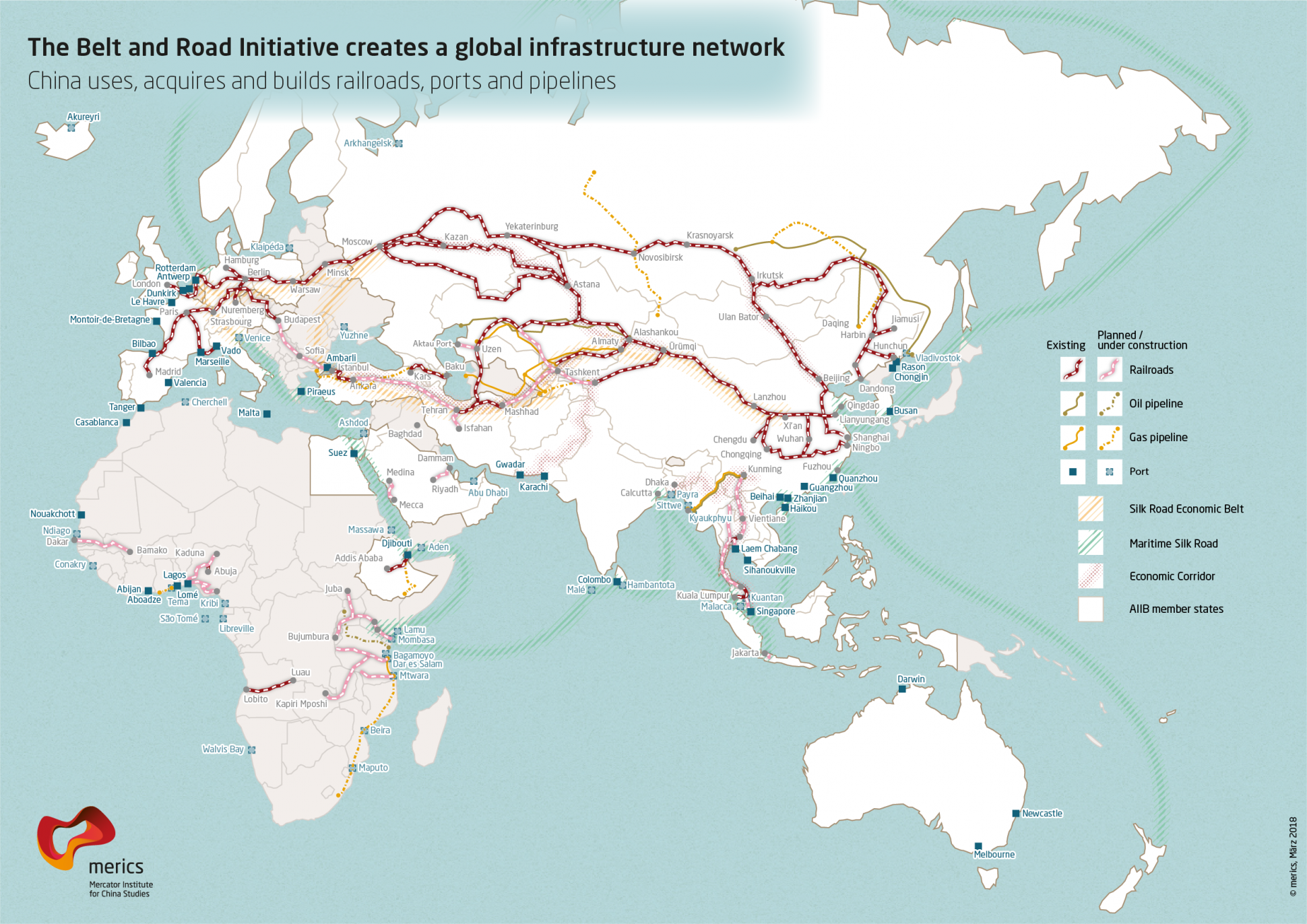 Matt Ferchen: "In many developing countries, China is the only option available"