The first in a series of Courts of the Internet to open across China utilizes Alibaba’s size and experience to pioneer online dispute resolution reform. It not only demonstrates the Chinese internet giant’s growing influence in the regulatory sphere, but more widely shows the increasing symbiosis of big tech and government, says Alice Mingay.

The Hangzhou Court of the Internet was the first of three online court platforms to launch across China in the last two years. For the first time anywhere in the world, every part of a case, from prosecution to decision implementation, can now be completed online. In just two years, the court has heard nearly 20,000 cases and the average time of hearings conducted online up was 28 minutes.

Offering a long overdue upgrade to the industry’s legal infrastructure, this online e-commerce court platform offers vastly more efficient dispute resolution than is available offline. As such, it has been hailed repeatedly in Chinese and Western media as an unprecedented step in extending digital legal reforms.

Alibaba played a crucial role in the design and operation of the court, highlighting the willingness of the government to work with influential private actors to undertake administrative reform. The company is providing identity verification through Alipay, automatically providing online retailer Taobao and its B2C spin-off T-mall transaction records as evidence, data encryption, storage and monitoring through Alibaba Cloud, enforcing judgements across its ecosystem and more.

Simultaneously, as these graphs show, Alibaba is notably also a defendant in over half of the cases tried here. 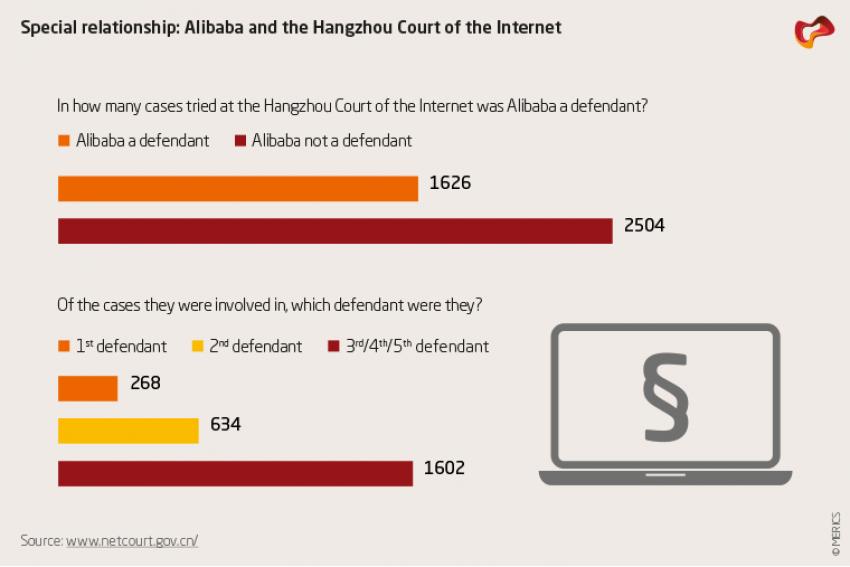 In many cases, it is not in fact Alibaba that is on trial – it is instead frequently listed as 2nd, 3rd, 4th or even 5th defendant because of its contractual relationship with the 1st defendant, largely but not exclusively through Taobao or T-mall. As a company domiciled in Hangzhou, its connection is used to trace the jurisdiction of the dispute to this city, where all cases that fall into the following categories should now be heard at the Court of the Internet:1

Thus, although it is officially only a local court, it is effectively able to operate as a national court and accept cases that have originated all over China. It is not just Alibaba of course – many Chinese e-commerce companies are based in Hangzhou, and this means the court can attract a large base of plaintiffs. However, Alibaba’s reach across the e-commerce industry means that it appears in far more cases than any other company.

As set out in The Trial Procedure for the Hangzhou Court of the Internet Litigation Platform, the court was set up with a clear purpose to utilize internet technology to make the litigation process more convenient for parties. In this regard, it has been a success, handling cases in a fraction of the time of a normal court. The fact that plaintiffs do not have to be physically present at the trial is crucial to this success as this significantly reduces the time and cost necessary to pursue a claim.

As such, whilst the court does not fundamentally redesign the litigation process, it does provide a vehicle for increased efficiency in an otherwise slow and expensive system. Regardless of demand for more fundamental judicial reform, the plaintiffs have not lost anything they didn’t have before – on the contrary, they have gained a channel for formal dispute resolution that simply didn’t exist otherwise, and a comparatively quick and inexpensive one at that.

The PRC is by no means the only government seeking collaboration with private technology companies to digitally reform its legal system. Notably, media conglomerate Thomson Reuters and software developer McGirr are both extensive providers of internet court technologies in Australia, the US and the UK. Nonetheless, Alibaba’s involvement stands out because of its stake in the wider industry under regulation.

Taobao already provides its customers with access to an internal dispute resolution channel through which they can pursue compensation claims against other platform users. This has been widely heralded as a key part of Taobao’s success, as it offered recourse to its users where the legal system was otherwise too expensive and slow.  It now appears that the government is increasingly willing to draw on Alibaba’s experience and expertise in this area, which is allowing the company to assert its commercial influence further as a regulatory authority.

Taken in conjunction with the company’s influential role in the drafting of the PRC E-Commerce Law (2018),2 this court provides further evidence of a palpable shift from Alibaba merely enforcing internal platform rules towards affecting the content and infrastructure of the e-commerce formal legal system.

Whilst human judges remain responsible for deciding case outcomes, a pilot AI assistant judge (试点AI助理法官) was introduced into this court in June of this year to experiment with digitalizing this additional step. For now, this remains a flagship experiment designed to impress commentators, whilst the viability of more widespread implementation remains unclear. Nonetheless, given it is once again Alibaba that has developed this judge, this raises questions, at the very least, as to potential conflicts of interest and algorithmic bias.

For foreign companies operating within the e-commerce sector, this Court of the Internet is important to be aware of as part of the changing industry landscape. Whilst Alibaba’s influence is notable in itself, it is more broadly indicative of an increasing symbiosis between big tech and government in China. Yet the significant efficiency gains are not without their risks: data protection, systematic bias in algorithms and shortcomings in IT are but three of the issues that both parties must continue to address going forward. How this is achieved will be crucial to the success of the overall project.