The G7's B3W initiative will redouble Beijing's resolve to win European firms for BRI projects. But, says Juliana Bouchaud, tensions with the EU suggest its chances of success are modest.

China's Belt and Road Initiative (BRI) is a symbol of its economic and political power, but Beijing is still struggling to convince the world of its worth. The G7's endorsement of the “Build Back Better World” (B3W) partnership as a “democratic alternative” to BRI appears to have stoked China's anxiety. After Italy's foreign minister Luigi di Miao in late June spoke with his Chinese counterpart Wang Yi, Beijing underlined Italy's willingness to promote the BRI and encourage European firms to help build it (through so-called third-party market agreements) – assertions conspicuously absent from the Italian readout of the exchange.

China will increase efforts to engage European firms in the BRI

While Chinese state media portrayed Beijing's version of events as a sign of European pragmatism towards economic cooperation with China (and of the USA's failure to fully unite Europe behind B3W), Italian official sources said the sensitive topic of BRI had been deliberately left off the agenda. Either way, Beijing's wish to address this underused instrument of third-party market agreements is evidence that it remains a priority for China. Faced with the possibility of the US rallying European G7 partners under the banner of the B3W partnership, China will double down on its effort to engage European firms in the BRI.

China presented the concept of third-party market cooperation in 2015 to address criticism of the poor quality of BRI projects and their exclusion of foreign firms. The “triple win” model (三方共赢), as Chinese policymakers call it, is meant to pool the industrial capacity of Chinese enterprises with the technological expertise of companies from developed economies to meet the infrastructure needs of developing nations. Following a Franco-Chinese Joint Statement on Third-Party Market Cooperation in March 2015, 13 other developed countries (half of them from the EU) signed similar agreements (see table).

Touted as a “1+1+1>3” model which would benefit all parties, China in particular stands to gain a lot. Beyond the symbolic value of cooperating with European companies, it would allow Chinese enterprises to gain experience in standards compliance, project management, technology and so on. It would help to address criticism of the BRI's lack of transparency, quality and financial sustainability, and over time fulfil Beijing's more ambitious goals, namely transitioning to more mature markets and promoting Chinese standards. Involving third parties also promises new sources of credit and less risk for Chinese investors.

For European signatories, the MOUs held the promise of selective cooperation – rather than full political endorsement or confrontation – and of their companies engaging with Chinese counterparts on a more level playing field. But the apparent shared enthusiasm for such agreements failed to translate into concrete projects. Despite the creation of cooperation mechanisms and dedicated joint funds (see table), third-party market cooperation projects remain an exception, suggesting that working together proved much harder than hoped.

The Center for Strategic and International Studies' Reconnecting Asia Project said in 2018 that only 3.4 percent of all the BRI projects it tracks across Eurasia involved third-party companies. The European Chamber of Commerce in China in 2020 confirmed this trend, reporting a “profound lack” of participation by European businesses – only 20 of 132 surveyed members had bid on BRI-related projects. Non-EU signatories seem to have had similar experiences – for example, there has been no movement on 50-odd Memoranda of Cooperation signed following the Japan-China Forum on Third Country Business Cooperation in 2018.

Given such lack of success, potential European and Chinese partners would be excused for seeing no further opportunities. After all, the BRI is about much more than infrastructure contracts – it is about Beijing's international self-projection by delivering its vision of global public goods, so the chances of the BRI ever becoming a truly multilateral initiative were always slim. But a number of recent decisions in Beijing suggest that at least China will continue to pursue third-party market agreements – and that the B3W initiative will, if anything, make it more determined to snatch success from the jaws of failure in this field. 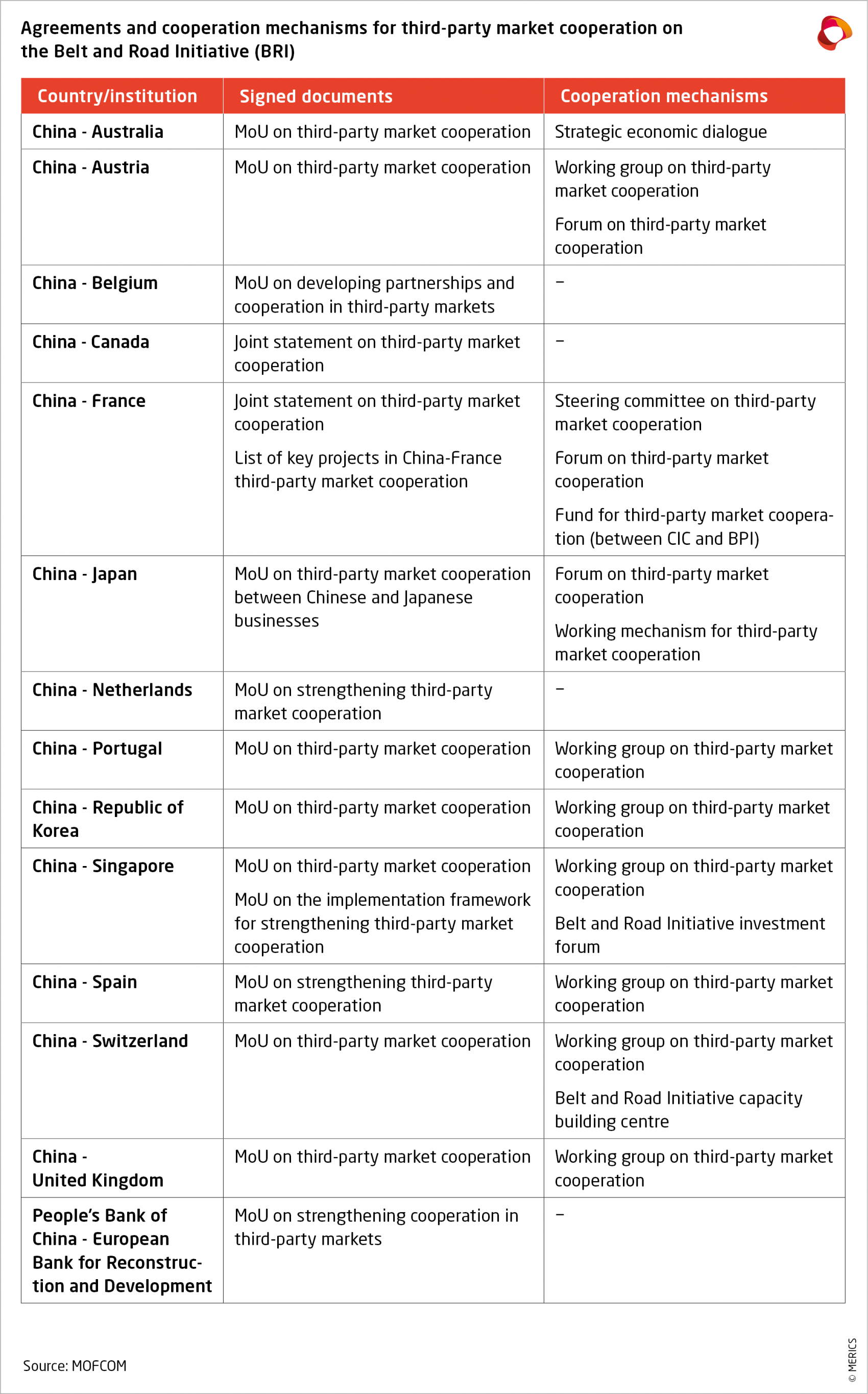 Not only is third-party market cooperation included in the recent 14th Five Year Plan for 2021 to 2025, it was also the main topic of a roundtable discussion at this year's China Development Forum. Third-party market cooperation is flanked by larger rhetoric about the BRI's shift to “high-quality development” (高质量发展) and about the need to engage with Europe to realize China's vision of “genuine multilateralism” (真正的多边主义). The most recent white paper on international development frames the BRI as the core of China's development efforts and as an extension of the UN's Sustainable Development Goals.

Third-party market agreements with European firms would help China achieve its vision of a “high-quality”, clean and green BRI. But tit-for-tat sanctions in March and the shelving of EU-China Comprehensive Agreement on Investment in April has raised tensions between China and the EU and fueled discussions about alternatives to the BRI. While recent documents from the EU like the Indo-Pacific Strategy or the conclusions from the EU-Japan Summit promised to reinvigorate existing connectivity schemes in the region, the Commission is now getting serious about building up the brand of its global infrastructure projects.

However, US and EU talks about infrastructure initiatives – often posited as “BRI alternatives” – go back at least six years and results are thin. B3W has so far produced only a taskforce, leaving the world waiting to see whether developed economies “put money where their mouth is,” as one commentator put it. With a 40 trillion USD global infrastructure gap, it would be extremely useful for Chinese and European firms to work together with host countries to meet development needs – under BRI, B3W or something else. For now at least, Beijing will keep trying to win European companies for the BRI.

Juliana Bouchaud was an intern in the International Relations team at MERICS from April until June 2021. She holds a BA in Chinese Studies from the University of Cambridge and is now pursuing an Msc in Global Governance and Diplomacy at the University of Oxford.