China: The missing presence at COP26

China has great ambitions when it comes to climate action. However, the currently largest source of carbon dioxide emissions is moving at its own pace, say Barbara Pongratz and Nis Grünberg.

China’s President Xi Jinping did not deliver his statement at COP26 in person — he did not even deliver it in a live video speech. In terms of content, his written statement offered little to clarify recently announced national policies, with no elaboration on how China will meet its targets of carbon peaking before 2030 and carbon neutrality by 2060. His statement was unsatisfactory in terms of the level of ambition, potentially blocking the path to achieving the United Nations Framework Convention on Climate Change‘s (UNFCCC) 1.5°C target. It leaves the space for global leadership open for the EU and the US, which have presented somewhat more ambitious targets.

Xi’s written statement covered three points — the need to maintain a multilateral consensus, focus on concrete action and speed up the green transition. On the first point, it seemed somewhat ironic that he pledged to "increase mutual trust” and “step up cooperation" while being one of the few world leaders not to attend the COP in person. Notably, Xi also stressed that countries should do as much as they can, while respecting the priority of development.

Calculations have shown that China needs to peak earlier than 2030 to keep global warming below 1.5°C. At this point, a degree of climate competition might be even more useful than cooperation. The EU needs to overtake China in its commitments and lead by example.

China has great ambitions when it comes to climate action. However, the currently largest source of carbon dioxide emissions is moving at its own pace. Climate policy is now a domestic issue dealt with by the highest leaders, which means that climate protection will accelerate. Yet, it is crucial to understand that social and economic stability are even higher on the priority list. Even the new strategy for peak carbon by 2030, released in late October, announces more forceful actions, like cutting coal power. However, it will only be implemented during the 15th Five-Year Plan covering 2026-2030. This means that emissions from coal will continue to rise for at least three more years.

There are several reasons why Xi did not travel to Europe for the G20 summit and COP26. More broadly, it can be seen as yet another sign of China’s inward turn toward domestic structural issues and events. Xi is preparing for the top-level sixth plenum of the CCP Central Committee on 8 November and for next year’s Communist Party Congress, where he is likely to be enshrined as leader of a “new era” in China’s development. He has also not left China since the beginning of the pandemic — it being of utmost importance for the top leadership to be seen as keeping things in order at home and to be maintaining full control. Xi currently faces challenges as a consequence of the pandemic’s impact and the recent energy crisis.

Indeed, the green transition and smooth domestic development do not always go hand in hand, and when choosing between socio-economic stability and sustainability, Beijing will always pick the former. The energy crunch has made it painfully clear to Beijing and the world that developmental priorities will slow down climate efforts.

Just after the start of COP26, the US released its new long-term climate action plan. A comparison of the US’s new strategy with China and Europe's numerous pledges reveals that all three have stepped up their game. However, as observers have noted, China has not yet reached its national carbon peak, and it is unclear at what level of CO2 emissions it will do so, how long before 2030 it will reach its carbon peak, and how quickly emissions will decline thereafter. Setting those targets will be crucial for global climate action and for achieving the 1.5°C goal defined by the UNFCCC.

An important factor in the success of COP26 will be whether negotiators will find a way to verify and unify the metrics of the signatories to the Paris Agreement. This would be a great success for all sides, as reading different targets does not provide a clear picture of the level of ambition. For example, when considering China’s target of “60-65% CO2 intensity reduction by 2030 from 2005 levels” and the US goal of a “50-52% CO2 reduction by 2030 from 2005 levels” (see table), the units can be misleading. 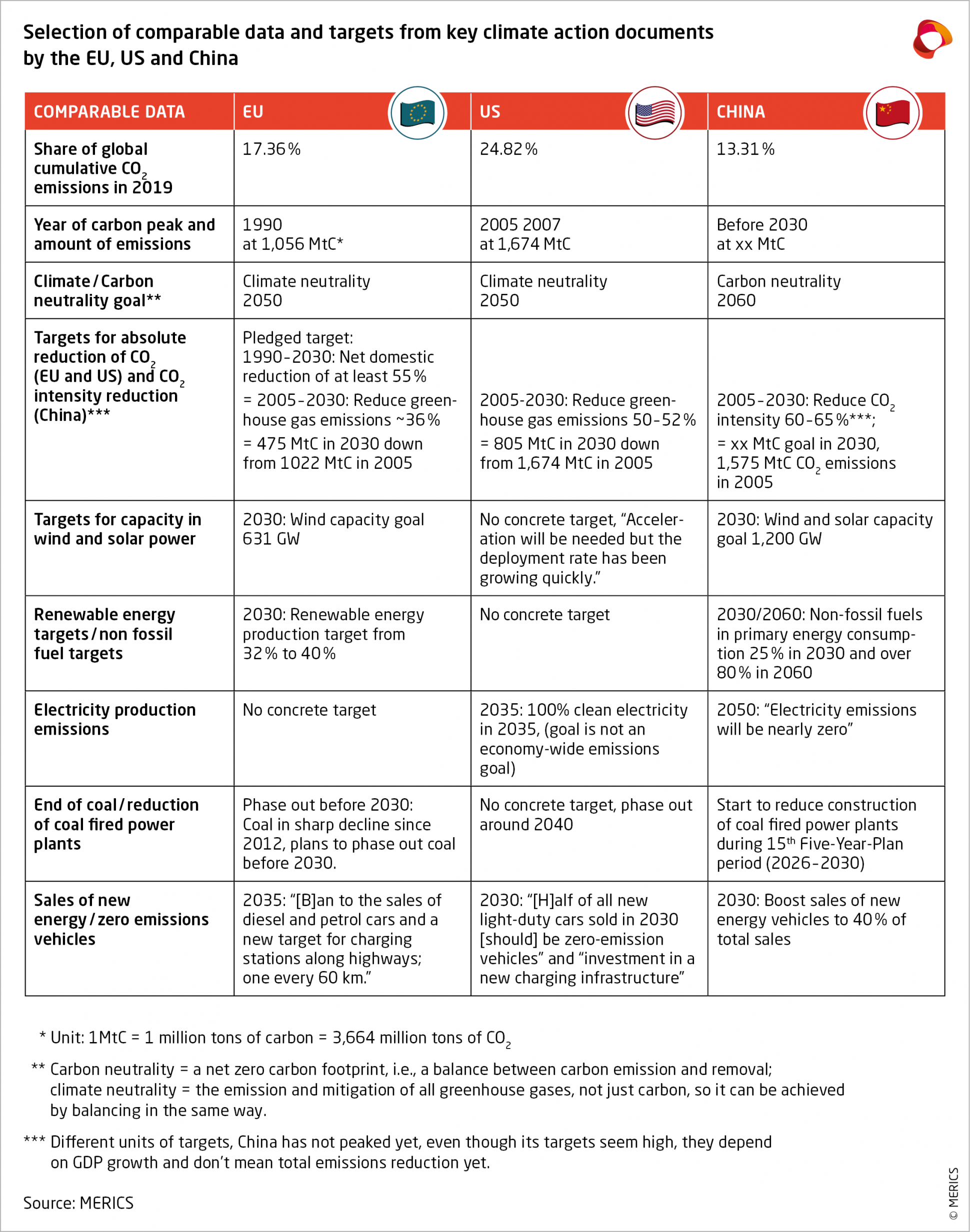 Stimulate a race to the top

Yet China switched from blocking to driving change since the Paris climate negotiations, and the long-term targets are ambitious. The country sees itself as the defender of the interests of lower-income countries. In Xi’s COP26 statement, he called on industrialized countries to “not only do more themselves but also provide support to help developing countries to do better". Further, he called on the EU and the US to make good on their USD 100 billion annual pledge to support less developed countries in mitigating and adapting to climate change, especially the latter. By not showing up, and by failing to provide detailed roadmaps of how to reach long-term targets, China has failed to live up to its promise to become a leader on climate action.

Clearly, if the EU and the US want COP26 to be a success, they must strike the right balance between increasing their own efforts and supporting less developed countries. Calculations have shown that China needs to peak earlier than 2030 to keep global warming below 1.5°C. At this point, a degree of climate competition might be even more useful than cooperation. The EU needs to overtake China in its commitments and lead by example.

This article originally appeared in 9DashLine on November 3, 2021. 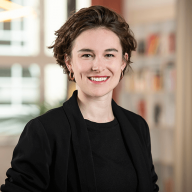