Setting the Agenda and Choosing the Team

At a time when the United States retreats from its global leadership responsibilities and China tries to assert itself as a global leader, changes to the political agenda of China’s governing party and its top leadership are of increasing importance to the rest of the world. When the Chinese Communist Party (CCP) convenes its 19th Party Congress in late October or November this year, the 2,300 delegates will discuss and endorse the Party’s strategic goals for the next five years and elect a new central committee. 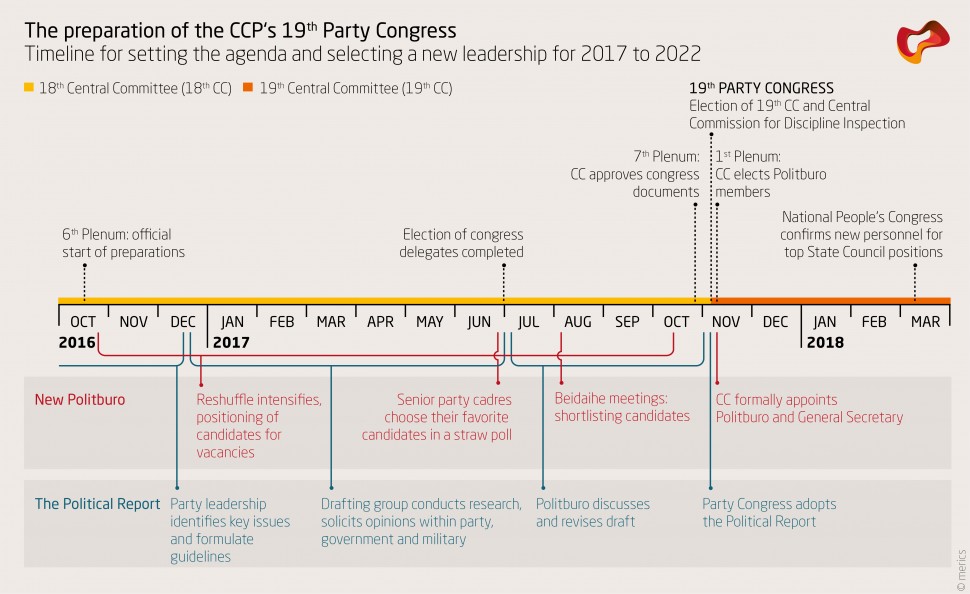 The day after the congress concludes, the newly elected committee will appoint the top leadership team tasked with implementing those goals. The Party Congress will also give the first authoritative indication on future CCP leadership constellations beyond 2022. If the rule-based, institutionalized processes of leadership successions initiated by Deng Xiaoping are upheld, we can expect Xi Jinping’s heir presumptive to be appointed to the Politburo Standing Committee.

The Party Congress is formally the highest decision-making organ of the CCP. Congresses are carefully choreographed affairs intended to rally party members around a political platform drafted under the supervision of the general secretary of the CCP. Simultaneously, the congress provides the stage to present this platform in the best possible way to the national public. Ahead of the congresses, there is little to no official reporting, but after their conclusion, party-state media present the roadmap leading up to the major event in the party's five-year political cycle. Since the preparatory process for this key event has been increasingly institutionalized since the 1990s, we have an indication of the major steps in between and their timing. Based on the assumption that there will be no major deviation from established practice, we present the milestones leading up to the 19th Party Congress in this graphic.

The Political Report – more than a Xi speech

The CCP’s future agenda will be announced in the so-called Political Report. CCP General Secretary Xi Jinping delivers it in form of a long speech brimming with Marxist and Leninist references at the outset of the Party Congress. The Political Report is among the most underrated documents by Western China watchers, even though it defines China’s political course. In 2002, the Political Report delivered by Jiang Zemin hinted at a rhetorical shift in the emphasis of economic policy towards rural areas and less developed regions. This paved the path for the so-called “Harmonious Society” concept and the “New Socialist Countryside” campaign – two defining elements of the Hu Jintao/ Wen Jiabao administration. In 2012, the Political Report read by the outgoing General Secretary Hu Jintao defined the fight against corruption as a “matter of life and death for the Party.” After being confirmed as general secretary, Xi launched an ongoing wide-ranging anti-corruption campaign.

It is fair to expect that the Political Report at the 19th Party Congress presents what the top leadership consider the priorities for the next five years.

Although delivered by Xi, the Political Report is not going to be a Xi speech. Rather, it will reflect the consensus of the Party elite. The drafting of the Political Report is a collective process that stretches out over nearly one year. Thousands of cadres are involved – at the central and provincial level, in party and government organizations, and in civilian and military institutions.

The Political Report is more than a manifesto for the future; it is also an evaluation of the past. It will be the official, authoritative verdict on Xi Jinping’s first term in office. Thus, expect praise to be showered on the anti-corruption campaign, the supply-side structural reforms and the concept of new-type major power relations. Beyond that, we can expect that China’s first “centenary goal” of creating a “moderately well off-society” by 2021 will feature prominently in the report.

Leadership elections – watching out for the successors-in-training

The Party Congress will elect the 19th Central Committee. Since March 2016 there has been an extensive reshuffle on the provincial level and within central government ministries. Party secretaries in one third of China’s provinces have been replaced, and three ministers in key portfolios were newly appointed.

Top positions for the Politburo are decided behind the scenes. In the months leading up to the Party Congress, the CCP Organization Department and the CCP Secretariat under Xi Jinping’s supervision will prepare a list with the top contenders. These contenders must fulfill three requirements: (1) be (alternate) members of the Central Committee; (2) be born after 1950; and (3) have a proven track-record in managing political, economic and social issues. Ideological loyalty and adherence to party discipline are prerequisites for any member of the Central Committee. The list will then be submitted to an enlarged meeting of current and former leaders.

In 2007, Hu Jintao convened such a meeting of 400 current and former top cadres. This meeting will produce a shortlist. At additional meetings of top-level cadres, such as the annual Beidaihe Conference, the number of candidates will be reduced further. The final list will be presented to the newly elected Central Committee. Thus, one could argue that the new Central Committee will ratify a foregone conclusion.

We can fairly expect that Xi Jinping and Li Keqiang will remain in office for another five-year term. Yet, if the age limit still applies and if there is no change to the number of seats in the Politburo and its Standing Committee, five of seven seats on the all-powerful Politburo Standing Committee and 11 of 25 seats in the total Politburo will have to be filled with new members. Should the newly selected members include two cadres born after 1960, they would likely be the successors-in-training for Xi Jinping and Li Keqiang. If this is not the case, it would add to speculations about Xi’s alleged plan to extend his time at the helm of the party beyond 2022.

China in 2021: agenda setting, anniversaries, and potential for conflict