From marriage of convenience to strategic partnership: China-Russia relations and the fight for global influence

Beijing and Moscow have gone to great lengths to publicly reaffirm their strategic partnership. They have done so amid rising geopolitical competition and re-emerging transatlantic cooperation over how to deal with China. However, the Sino-Russian relationship is not a full alliance. Tensions remain, which could eventually undermine the partnership. Meanwhile, however, Sino-Russian cooperation already poses challenges and threats to Europe, NATO and the rules-based international order which deserve immediate attention.

Russia and China have renewed the 20-year-old Sino-Russian Treaty of Good-Neighborliness and Friendly Cooperation. The 2001 treaty’s renewal on June 28, 2021, provided a show of unity a fortnight after the NATO summit declared that China’s “ambitions and assertive behavior presents systemic challenges to the rules-based international order” and to Alliance security. China’s military links with Russia were also singled out.

President Vladimir Putin hailed the treaty as a “fundamental international legal document” that "plays a stabilizing role in global affairs,"  while President Xi Jinping has called it a “vivid example of building a new type of international relations and community with a shared future for mankind.”  Although it falls short of binding China and Russia into an alliance, it does outline their shared concerns over the current global order and sets out a framework to cooperate in reforming it.

In 2001, the agreement was described as "an act of friendship against America," at a time of deteriorating relationships following NATO’s bombing of Yugoslavia and direct hit on China’s embassy in Belgrade. Today, Russia and China are once more feeling the pressure. But what may have started as a marriage of convenience has evolved into something much more solid over the years.

A strategic partnership for the “new era”

In 2019, Beijing and Moscow upgraded the relationship to the highest level of partnership within China’s hierarchy of diplomatic ties - a Comprehensive Strategic Partnership of Coordination for a New Era. The upgrade committed them to cooperate on key international issues, from global governance to defense and security affairs.

Russia and China share broad agreement on their approaches to many big issues, ranging from cyberspace to global governance, human rights and the economy. But topping the list is their shared opposition to the Western-led rules-based international order and belief that the US is their main adversary. 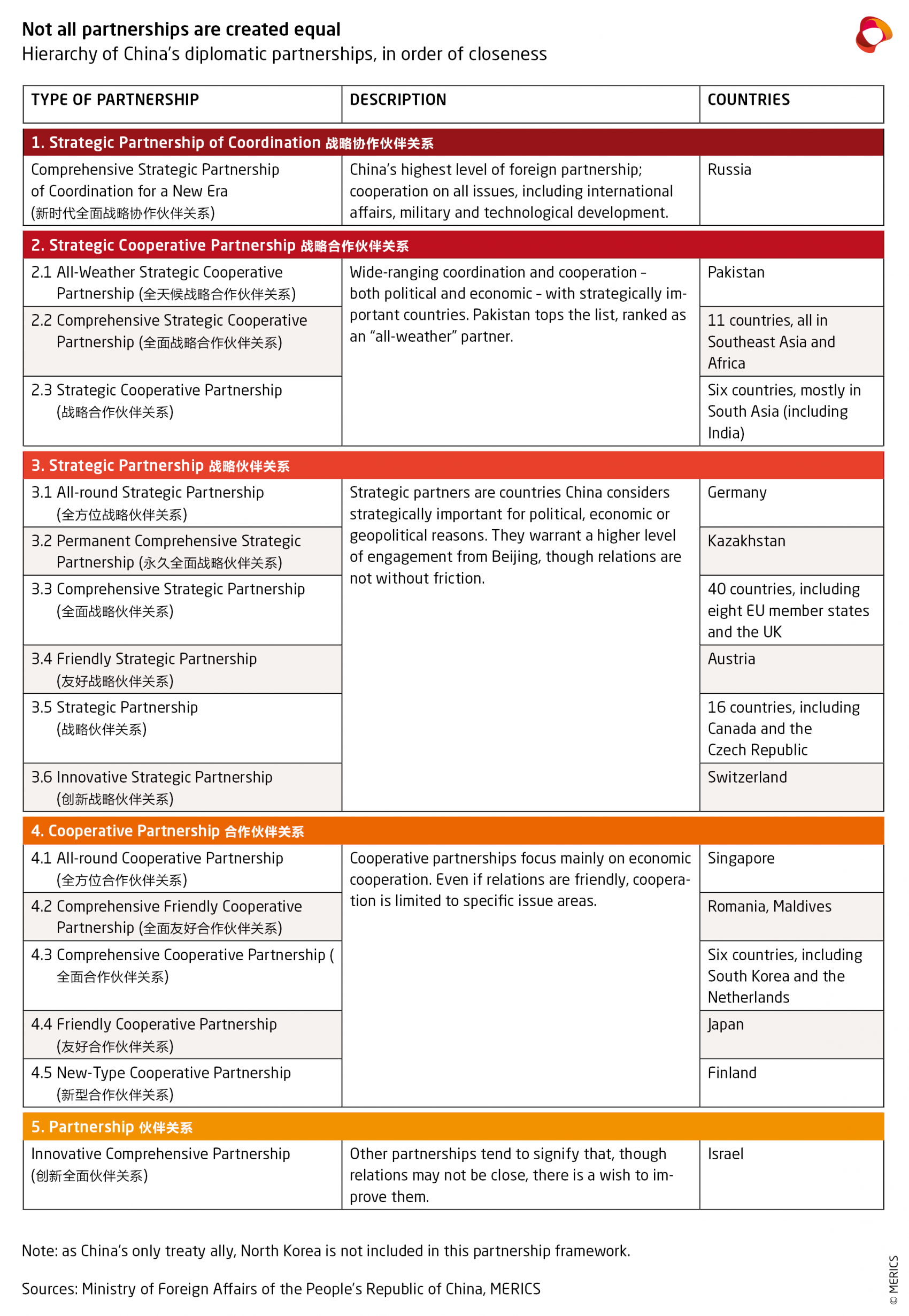 Worsening relations between China and the West have brought these commonalities to the fore. For instance, Russian and Chinese officials have been sanctioned under the EU’s new global human rights sanctions regime, triggering strong responses from both Beijing and Moscow. China’s Foreign Minister Wang Yi and his counterpart Sergei Lavrov have commented that sanctions are drawing them closer together and accused the West of “imposing their own rules on everyone else, [rules] which they believe should underpin the world order.”

China and Russia have increased their cooperation in recent years. They have showcased their close military ties with joint exercises and drills and have teamed up in the United Nations Security Council (UNSC) to block measures that target themselves or their partner countries. Their economic ties also remain strong. Russia is still China’s top arms supplier, as arms-trade restrictions limit Beijing’s access to other markets. Cooperation is also expanding into the science and technology field. In 2021, Beijing and Moscow announced projects to build a joint lunar research station and to cooperate on nuclear energy. China and Russia have also pledged cooperation on data security, and there are concerns that they may increasingly coordinate actions and strategies, and even share intelligence.

Sino-Russian military cooperation and alignment on ideas of global governance, and their growing coordination on other matters of relevance to Europe and NATO - from hybrid warfare and disinformation to arms control issues or their presence in the Arctic - already threaten European interests, security and the rules-based international order.

Competition over spheres of influence may cause friction

However, the Sino-Russian relationship is not a full alliance. There are clear limits to what each party will do for the other. China, for instance, refused to publicly support Russia’s annexation of Crimea, and Moscow has so far decided not to get involved in the South China Sea dispute or in cross-Strait relations.

Beyond the grand statements about friendship and cooperation, the interests of Beijing and Moscow are not fully aligned. Their relationship is marred by a degree of distrust that will only grow as the balance of power between them tilts further in China’s favor. Whereas China’s economy continues to grow and Beijing’s global influence is rising, Russia’s economy is stagnant and plagued by inefficiencies that will gradually diminish Moscow’s global sway.

Friction is most likely to materialize first in third countries where the two sides will vie for influence, as Russia fights to retain its sphere of influence and avoid losing strategic autonomy. Signs of such tensions are already starting to emerge. Many in Moscow are becoming concerned about China’s footprint in the Arctic and Central Asia – regions that belong to Russia’s traditional sphere of influence – and about the risk that Russia will be replaced as the main actor in both regions.

The ability – and willingness – to respect each other’s interests will be a litmus test for the long-term strength and sustainability of the relationship, visible in how they balance competition and cooperation in third countries.

Afghanistan’s turmoil is likely to provide an early example of whether Russian and Chinese geopolitical ambitions will undermine their alliance against the West. Beijing and Moscow share a primary concern towards Afghanistan: they seek to maintain stability and prevent security threats spilling over into their territories. They are also united in their criticism of US intervention in Afghanistan.

However, Russia has long seen itself as a regional hegemon and is wary of any foreign power’s efforts to increase its presence there. Meanwhile, China has expressed a wish to expand its footprint in Afghanistan and bring it into the Belt and Road Initiative (BRI). Cooperation is possible, but there are signs that Russia and China may be pursuing competing agendas: Moscow and Beijing have both rushed to make bilateral overtures to the Taliban, while touting the Shanghai Cooperation Organization of Central Asian nations (of which they are both members) as a possible mediator.

The way forward for Europe and its allies

Confronted by its diminishing influence, Moscow is likely to fight back against the risk of becoming too dependent on China, whether politically or economically. A push back against Beijing may start in regions that are inside Russia’s traditional sphere of influence, including Central and South Asia, the Middle East, or the Balkans and Black Sea region.

While the relationship may unravel by itself over time, Sino-Russian cooperation already poses clear challenges to Europe, and to the West more broadly, that must be tackled sooner rather than later. Increasingly isolated in the international arena, Beijing and Moscow help amplify each other’s messages and push similar concepts of global governance that threaten the rules-based international order. Russia’s sales of advanced weapons and military capabilities to China are helping the People’s Liberation Army (PLA) fill some of its equipment gaps and advance towards its goal of becoming a world-class military that can fight and win wars by 2049. They are likely to coordinate further in strategic domains, such as hybrid warfare or disinformation.

The strategy often championed by French President Emmanuel Macron and, to a lesser extent, German Chancellor Angela Merkel, of re-engaging Russia, partly to peel it away from Beijing is doomed to fail. Moscow simply has more shared values with Beijing than it does with Brussels, especially on approaches to global governance. Economic carrots are unlikely to sway President Putin’s cost-benefit analysis. These attempts at reengagement and conciliation with Moscow will only encourage President Putin to demand more concessions, and to expand cooperation with China.

A different and more nuanced strategy must be found. Europe and its allies should first and foremost focus on individual issues where they can mitigate the challenges the Russia-China relationship poses to European interests and security. These could include their coordination on hybrid warfare and disinformation campaigns, or their joint attempts to take a leading role in reshaping the norms that underpin the rules-based international order. Tackling these issues will require more information gathering and analysis on the extent of Sino-Russia cooperation; better coordination between EU member states and partners; strengthening existing alliances and building new ones. All this is a prerequisite to effectively push back against actions by Beijing and Moscow in international organizations and elsewhere.

In the longer-term, incremental efforts should also be made to limit the depth and breadth of Sino-Russian cooperation by convincing Moscow that its alignment with China may eventually harm its own interests, and that some cooperation with the West may be possible on specific issues, and preferrable to becoming China’s junior partner. Existing frameworks for Europe-Russia cooperation in the trade, energy, counter-terrorism or environmental sectors could be leveraged for this purpose. While this would most likely not drive Russia entirely away from China and into the arms of the West, it could over time change Moscow’s assessment of the merits of leaning exclusively on Beijing as a global partner.

Why China isn’t backing away from alignment with Russia