Screening foreign investment in the EU – the first year

The EU framework for foreign direct investment (FDI) screening became operational a year ago, in October 2020. MERICS analyst Francesca Ghiretti assesses the contribution it has made to screening inbound FDI and to the EU’s debate on economic security.

Throughout its development the EU foreign direct investment (FDI) screening mechanism received much criticism. It still does, both from those who thought it should not exist and from those who thought it was not strong enough. As often happens in Brussels, the tool had to find a balance between the two extremes and work out a way to screen FDI without stepping on the toes of member states.

Assessing its contribution one year on, while it has clearly had a positive impact, this would be given a further boost if there were more capacity in Brussels to map and create incentives for information sharing.

When a member state screens an investment on the basis of its national screening mechanism, it must report that investment to Brussels, where the investment is looked at on the basis of national security and public order. In a second phase, the Commission and other member states can provide their opinions regarding the transaction. Once the state receives the opinion, it is up to it what to do with it – it can choose to ignore it if it wishes.

The notification and opinion sharing system does not apply to member states who do not have their own national mechanism. Currently 18 of the 27 member states possess a form of policy to screen FDI. There is a sort of safety net for those that do not as they still have to file an annual report and provide information on specific FDI transactions if requested to do so by the Commission, and then receive the advice. Member states can also voluntarily ask for the Commission’s and other member states’ opinion.

The screening tools focus on China has faded

Although the mechanism has been used for investments from all over the world, the main reason for its adoption was undoubtedly the challenge posed by Chinese investments. Within the legal text setting up the mechanism, ownership by a foreign state appears as one of the criteria to be considered when assessing an FDI. Notably, the reference is mostly to Chinese state-owned enterprises.

The centrality of China has, however, faded since the mechanism became operational for two main reasons. First, the mechanism targets investments that are potentially a threat to national security and public order independently of their country of origin. Notifications sent to Brussels were not uniquely about Chinese FDI. Secondly, mainly due to the pandemic, the number of Chinese investments in 2021 has been rather low.

The number of EU members adopting screening mechanisms has grown

The screening mechanism has made a number of contributions, from the identification of important sectors for the EU, to setting fundamental standards for national FDI screening mechanism such as transparency and non-discrimination. The focus here, however, is on three aspects: the growing number of member states with a screening mechanism for FDI, the possibility to call on these tools when needed, and the exchange of information.

The second became clear at the beginning of the Covid-19 pandemic, in March 2020, when the Commission drafted guidance for member states on how to use FDI screening tools in a time of vulnerability.

The third aspect followed the activation of the mechanism. Although the mechanism cannot be used to directly block inbound FDI, it contributes to solving another major issue – the lack of information on FDIs in the EU. Thanks to the notification system, the Commission now has a clearer picture of inbound FDI. Clearer, but not complete.

All these contributions make the FDI screening mechanism an important tool for the EU. However, going any further with the assessment of its first year is difficult as the pandemic has slowed down inbound FDI. Nonetheless, even in these exceptional circumstances, the Commission has been busy with evaluating and responding to notifications.

Mapping of FDI in the EU remains a complicated exercise

Another issue regards skeptical countries and countries that do not have a screening mechanism. These countries do not have to notify the Commission of potentially concerning FDI because they do not screen them to begin with. The situation leaves the EU as a single market with an important blind spot that is only partially compensated for by the provisions on annual reporting and proactive requests for information from the Commission. Mapping of FDI remains a complicated exercise and it often slips under the radar in spite of the increased capabilities of the Commission and member states.

Compared to the United States’ and China’s screening mechanisms, the EU’s screening mechanism is more flexible and porous. The EU is not a unified state and therefore cannot apply the mechanism in the same centralized way, rather it is up to member states to decide how to use the tool. However, if more energy were dedicated to this effort and higher costs imposed in cases of lack of compliance, the mechanism could perform better. A dedicated unit with multilingual skills could facilitate the identification of cases that might otherwise slip below the radar and present a risk for the EU. 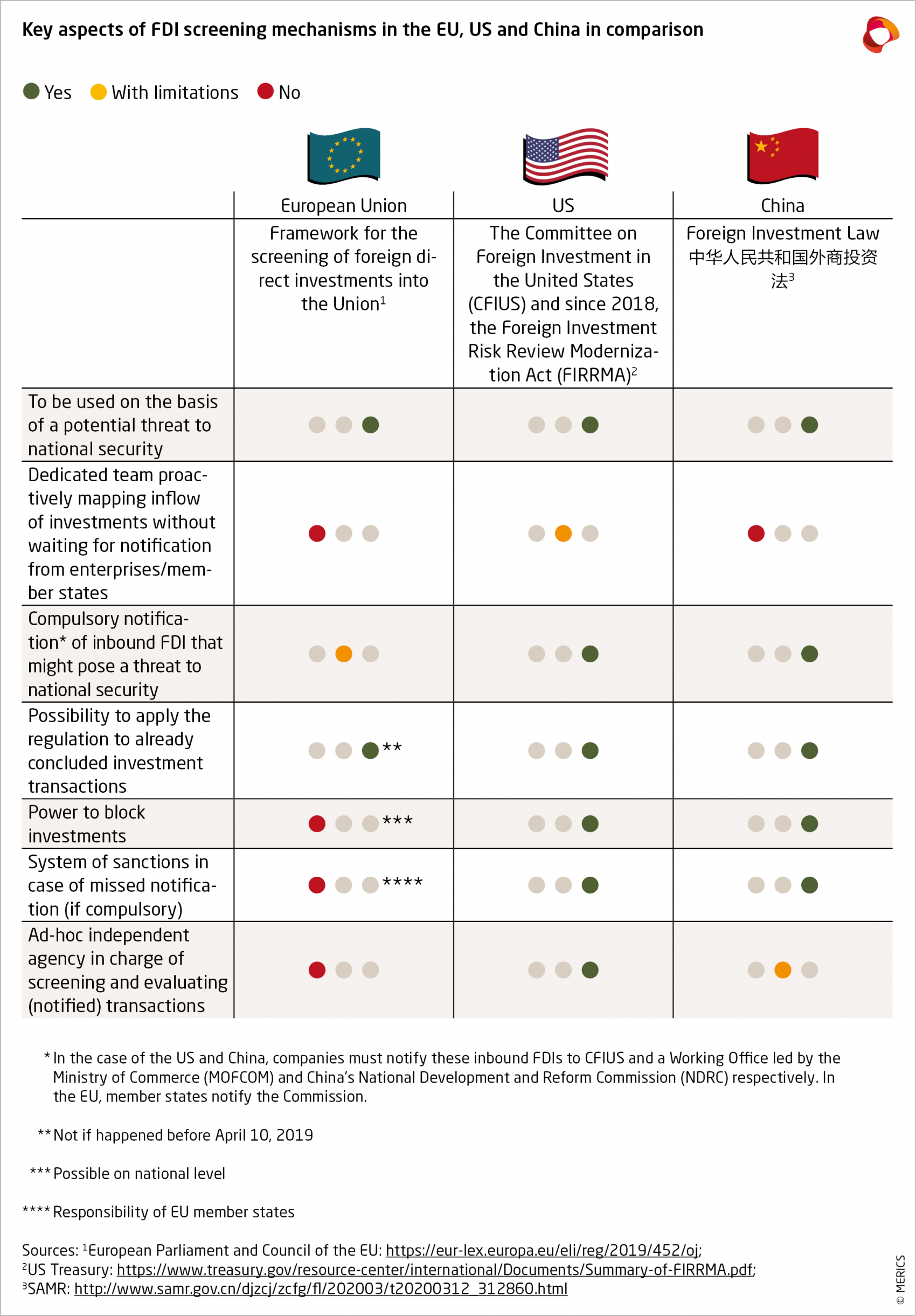 The screening mechanism has energized the debate on economic security

Perhaps the biggest contribution the EU FDI screening mechanism has brought to the EU is to give energy and substance to the debate on economic security. Although other tools have been on the table for longer (the international procurement instrument has been under discussion since 2012), the focus on the risks inbound FDI pose to the EU’s economic security in the short and long term, and the political weight behind it, allowed for the matter to gain importance. It has also encouraged an exchange of opinions that have led to the creation of a European position, which may not always be consistent but has greatly benefitted from the debate.

The EU could do a better job in advancing its own economic security agenda if it had a dedicated department or institute with multilingual staff devoted to screening FDI. But that aside, what this process has shown above all is that once the EU finds political support for an initiative, it can be pushed through the bureaucratic hurdles with impressive speed.