China is determined to become the globally-leading innovation center for Artificial Intelligence (AI). National industrial policies to promote AI are implemented at top speed at local and provincial level. In some cases, the local goals even exceed the national ambitions.

China’s government has identified Artificial Intelligence (AI) as a key technology to push its Made in China 2025 agenda and leapfrog to global technological leadership. When the State Council published its “New Generation of Artificial Intelligence Development Plan” in July 2017, it kickstarted its top-down industrial policy routine which is currently unfolding at full speed. The overarching goals are for China to catch up with advanced countries and create an AI core industry worth 150 billion CNY by 2020, to achieve major technological breakthroughs in AI by 2025, and to become the globally-leading innovation center for AI by 2030. With the overall framework set, China’s industrial AI policy has entered the next crucial phase, trickling down from the national level to individual provinces, municipalities and cities. By mid-April, governments within 18 provinces and municipalities had released AI plans to promote their local AI industries.

In the pursuit to outbid each other, their local targets even exceed ambitious national goals. 11 local governments published targets for their AI core industries for 2020. Accumulated, this would create an AI core industry of almost 400 billion CNY in 2020, exceeding the national target of 150 billion CNY more than twofold. While the unparalleled enthusiasm of local governments will accelerate China’s AI development considerably, it also carries the risk of creating overcapacities.

Frontrunners in the AI race are China’s most advanced economic centers Beijing, Shanghai and Shenzhen. As tech hubs and headquarters of the pioneers of China’s AI drive such as Baidu and Tencent, and of major AI startups including leaders in facial recognition technology SenseTime and Megvii, these cities will harness a massive impetus with powerful state backing.

The municipal government of Shanghai drew up the most ambitious AI plan of all, aiming for an AI core industry size of more than 100 billion CNY by 2020. To achieve this, Shanghai is building AI industry zones in multiple locations across the city. Last December, Shanghai’s Lingang Area Development Administration signed agreements with 15 leading Chinese AI firms, including Baidu Innovation Center, iFlyTek, Horizon Robotics, and Cambricon. Beijing thus sees its position as China’s leading science and technology hub with its stronghold in Zhongguancun seriously challenged. In response to Shanghai’s advances, Beijing’s government announced a 14 billion CNY AI industrial park in Mentougou district in January 2018.

Beyond first tier cities, other localities are also well positioned to compete for dominance in specific AI technologies. In Hefei, for example, the AI-focused industrial base called “China Speech Valley” (中国声谷) is already in full swing, hosting around 200 companies including China’s global champion in speech recognition, iFlyTek. The Anhui provincial government and the municipal government of its capital city Hefei are now joining forces to turn the industrial park into the country’s largest and strongest hub for speech recognition technology products. Together they plan to spend 3.2 billion CNY on R&D and application of intelligent speech and AI technology until 2020.

Provinces that have thus far kept a lower profile now desperately try to jump on the AI bandwagon as well. For example, China’s economically struggling northeastern provinces of Heilongjiang, Liaoning and Jilin all issued their own AI plans at the beginning of this year. According to the ambitions set forth in its plan, Liaoning seeks to transform from a blank spot on the AI map into the biggest AI innovation center in Northeast Asia by 2030. 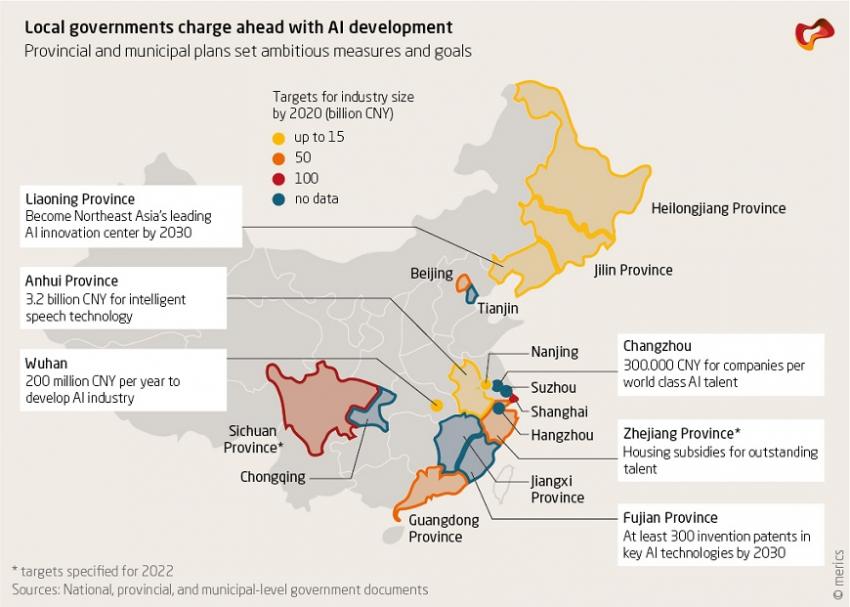 China’s various AI plans feature a common narrative: governments at all levels mobilize a lot of money to attract the cream of the crop of AI companies and talent. Changzhou in Jiangsu province, for example, plans to hand out between 200,000 and 300,000 CNY to companies and research institutions for each world-class or national-level AI talent who settles down in Changzhou Science and Education Town. In another example, Hangzhou tries to lure highly skilled workers with subsidies e.g. for auctions of highly-contested car license plates.

The message is clear: China is aware of its limited pool of AI experts. The run on exceptional AI talent, however, is a global phenomenon. Chinese and US companies try to snatch talent away from each other by establishing AI research centers in proximity to one another in Silicon Valley, Seattle and Shenzhen. As a result, salaries in the field of AI have skyrocketed. By entering an already fierce and pricy battle over such a small talent pool, China’s local governments more than ever risk burning through a lot of cash without yielding the envisioned results.

In its effort to tackle the talent shortage in AI, China’s national government is also looking to attract foreign experts. In the annual work report for the National People’s Congress last month, Premier Li Keqiang pledged to accelerate efforts to surpass the United States in advanced technologies such as AI by wooing overseas talent as one of the state priorities for 2018. A set of initiatives already underway includes express green cards to foreign high-end talent and their families (see also p. 11). Foreigners of Chinese descent as well as Taiwanese have been a special focus of China’s efforts to attract talent to work or set up companies on the mainland.

China is determined to play a leading role in global AI development. The country’s dynamic tech environment benefits from the sheer amount of data generated by its 800 million smartphone users and a legal system that does not provide effective protection of private data. Even though the AI sector is currently dominated by private companies, the national strategic interests in AI business applications and AI usage in defense as well as public security have prepared the ground for more active state involvement. The current top-down approach in China’s AI industry is thus in line with the country’s overall industrial policy, in that it mobilizes massive amounts of capital and labor towards a specific target even at the at the risk of creating inefficiencies and wasting resources.