Foreign policy in China gets top priority. The trips abroad made by President Xi Jinping, who is also General Secretary of the Chinese Communist Party, are a good indicator of the growing importance ascribed to this policy area by China’s leadership. Never have Chinese diplomats been as active on the global diplomatic scene as they have since Xi Jinping took office. 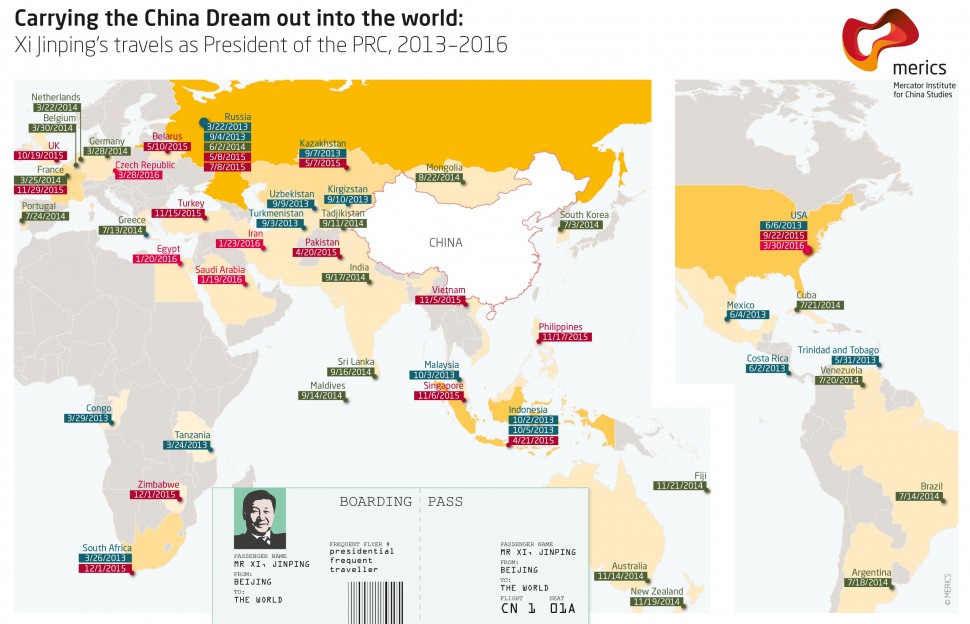 In spite of heavy economic turbulence at home, in spite of far-reaching restructuring of the political apparatus and in spite of the most ambitious military reform programme since the PRC was founded, Xi himself is working the field of foreign policy and giving it highest priority. In fact, he has visited over 40 countries in the last three years – a record that leaves all his predecessors far behind.

There are a number of reasons for Xi taking this new approach. For one thing, China’s foreign-policy ambitions have grown considerably under his leadership. Beijing has embarked on a new course in which moderation is no longer called for. A shift in the core premises of foreign policy has begun.

From the viewpoint of the leadership, China must become far more active in order to achieve its own objectives in this “period of strategic opportunity”. The nation’s presence in the Asia-Pacific region and far beyond is growing rapidly. This is also increasing China’s vulnerability at the same time, however.

New types of relations and some new initiatives

The new kind of superpower relations that the Chinese leadership is striving to achieve is reflected by the number of visits to other countries that Xi has made to date: the President has visited the United States three times and Russia as many as five times so far. Relations between Moscow and Beijing appear to be growing ever stronger despite deep-seated tensions. This attempt at a “fresh start” in terms of rhetoric has been ineffectual in the PRC’s relationship with the United States, however, as the U.S. administration will not accept the idea. The attitude in Washington is that progress in Sino-American relations must be demonstrated in practice and cannot be decreed from above.

What’s more, there is clearly a strong focus on Xi visiting nations along “the new Silk Road”. He has particularly been calling for support for the mega-sized economic initiative in countries in the vicinity of China and has also been trying to build up a “new kind” of international relations with them as well. Visits to countries in Eastern and Central Europe are likewise taking place with the Silk Road initiative first and foremost in mind. In view of acute crises and shifts in the regional power architecture, the Middle East is gaining in strategic importance for China and is set to become the playing field for new diplomatic relations; so far in 2016, Xi has visited the three most important countries in the region: Egypt, Saudi Arabia and Iran.

Gaps in the itinerary

The President of the PRC even took time to visit Fiji (881,000 inhabitants), the Maldives (345,000 inhabitants) and Trinidad and Tobago (1.3 million inhabitants). The gaps in his itinerary stand out all the more when seen against this backdrop: diplomatic tensions with Japan continue on such a large scale that an official visit has been out of the question up to now. Apparently, it has not been possible to squeeze in an hour of flight time to visit North Korea either, which is China’s communist neighbour north-east of it – not even for the 70th Anniversary of the founding of the Workers’ Party of Korea.

Will American and Chinese Societies Support a New Type of Cold War?

Principles of Australian grand strategy for China (The China Story)