The Politburo brings together the key figures of party, state and military

One of the most important outcomes of the 19th Party Congress will be the new lineups in the Politburo (PB) and Politburo Standing Committee (PBSC). Elected by the 19th Central Committee, members of these most powerful decision-making bodies will preside over implementing the Party’s political, economic and social agenda.

In the five years since Xi Jinping became general secretary of the Chinese Communist Party (CCP), China’s political system has experienced profound changes. Nevertheless, it can be expected that most portfolios depicted in this infographic will still be part of the Politburo and its Standing Committee in the 19th Central Committee. 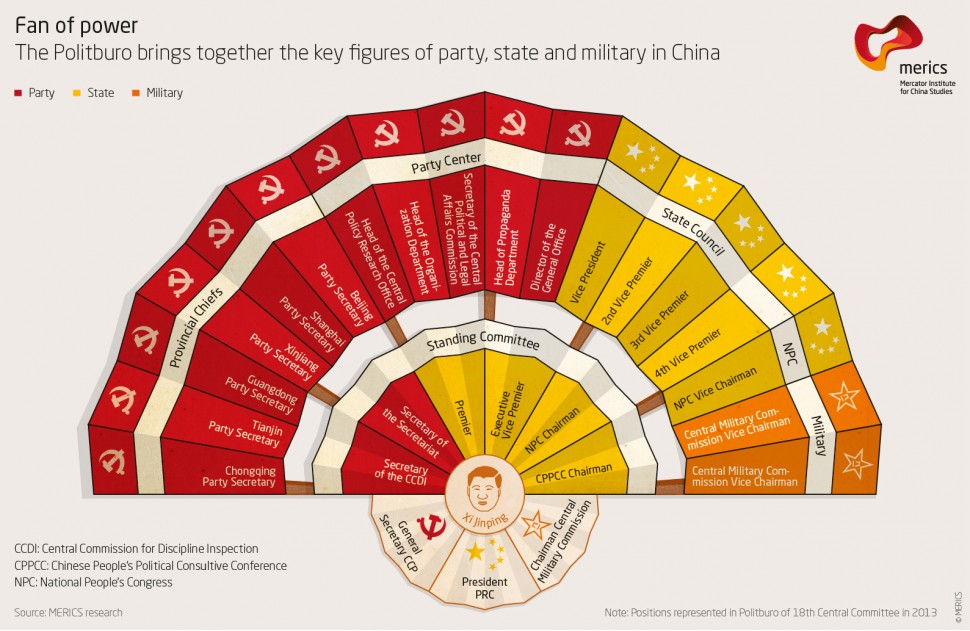 Over the last 25 years, the size of the Politburo has varied only slightly, between 22 members in 1992 and 25 since 2002. During the same period, the Politburo Standing Committee has had either seven or nine members. Looking at the PB and PBSC constellations since 1992, we realize that most portfolios have been consistently represented. For example, the State Council’s vice premiers, the Central Military Commission’s two vice chairmen, the head of the Propaganda Department and Beijing’s party secretary have always had a seat at the decision-making table. Thus, it seems reasonable to assume that those portfolios will also be represented in the 19th Central Committee’s Politburo. Yet the question of who will occupy those portfolios is very difficult to answer—especially this time around.

In the past, China watchers relied, to a certain extent, on unwritten rules and conventions to identify the pool of eligible candidates for PB and PBSC promotions. One unwritten rule pertains to the retirement age: current PB and PSBC members older than 68 would have to retire at the next Party Congress.

If this rule was to be upheld, this would mean that 11 out of the 25 seats in the PB and five out of the seven seats in the PBSC would be up for grabs at this year’s congress. In the past, new members of the Politburo were drawn exclusively from the member pool of the outgoing Central Committee. The same seniority rule applied to the membership of the Politburo Standing Committee: only Politburo members were eligible for a promotion to a post in this powerful body. Further, Politburo members could also be promoted by occupying a more powerful portfolio without moving up into the Standing Committee. For example, then Guangdong party secretary, Zhang Dejiang, was promoted to vice premier shortly after the 17th Party Congress in 2007.

Xi seems determined to change at least some of the rules of the game. The recent appointment of his close associate Cai Qi as Beijing’s party secretary is a case in point. Although Cai is not even an alternate member of the 18th Central Committee, it is now very likely that he will be appointed to the Politburo at the upcoming congress, as Beijing’s party secretary has always been elected to the decision-making body.

In the Xi era, making predictions on who exactly will become member of the Politburo and its Standing Committee is nigh on impossible. China watchers around the globe are debating the political future of Premier Li Keqiang or whether Xi will keep anti-corruption tsar Wang Qishan in place. If Xi is going to select his successor-in-training at the 19th Party Congress also remains an open question. In any case, Xi will try to place as many trusted allies in the influential Politburo positions as possible. If he succeeds or fails will be an important indicator of how tight his grip on power really is in today’s China.