Since April 2017 seven new free-trade zones have been established in China, with the intention of luring trade and foreign investment into long under-developed areas. These new zones are located in the provinces of Liaoning, Shaanxi, Henan, Hubei, Chongqing, and Sichuan.

With the introduction of a negative list in these Pilot Free-Trade Zones (PFTZ)— which include, among others, parts of the cities of Shenyang, Zhengzhou, Chengdu and Wuhan— the Chinese government has created a new instrument for regulating foreign investment. While the authorities want to facilitate foreign investment in some sectors, in particular those requiring foreign partners’ high-tech know-how, other sectors such as media and publishing remain heavily restricted. 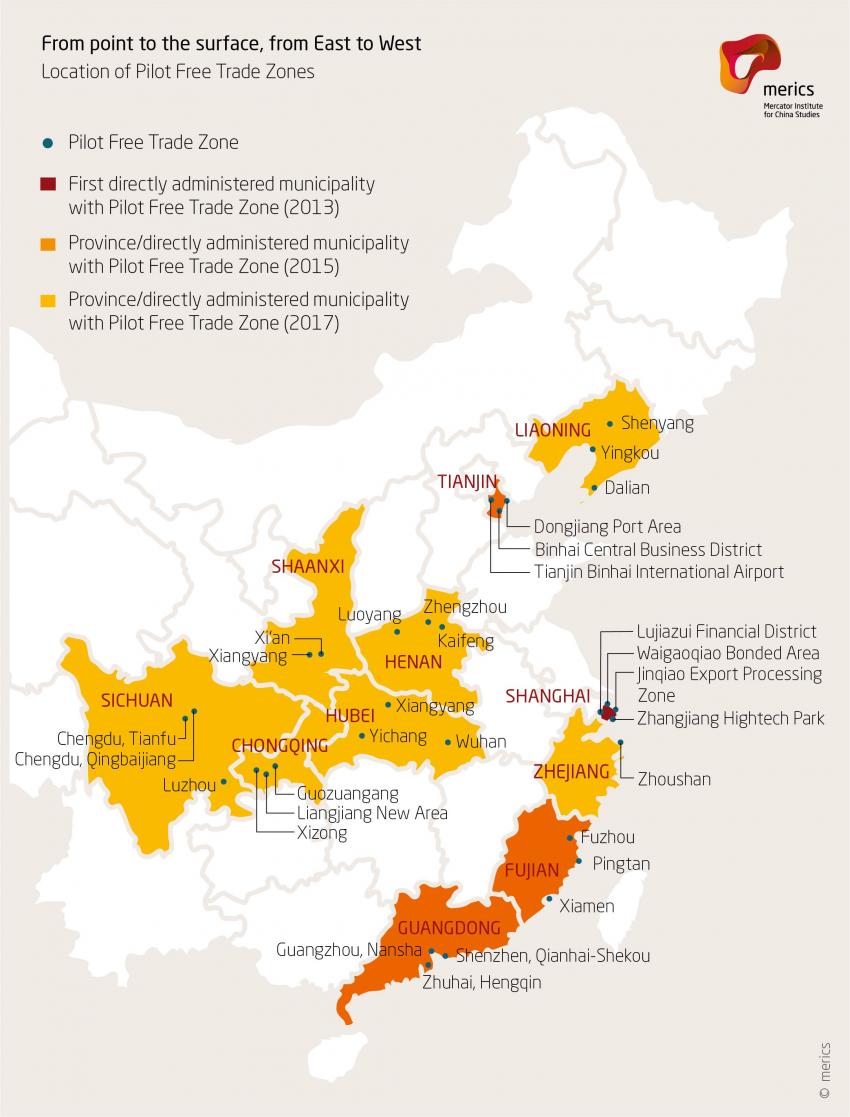 The new Pilot Free-Trade Zones serve primarily as a testing ground for the negative list, which will eventually take effect throughout the country. By China’s own account, this merely furthers the government’s aim of opening more of the country to foreign investment, while clearly demarcating the areas of exception in which tighter regulations will prevail. The question of which particular sectors will in the future feature in the negative list will be a bargaining chip in trade talks, such as those over a planned bilateral trade agreement with the US.

In September 2013, the first Pilot Free-Trade Zone was established in Shanghai, where a negative list ratified by the State Council was debuted. In March 2015, further pilot zones followed in other cities. The negative list delineates the sectors and branches of the economy in which foreign engagement is restricted or else completely forbidden. Although the local government in the given PFTZs bears responsibility for the list’s implementation, the list itself is composed in Beijing by the National Development and Reform Commission (NDRC) and the Ministry of Commerce. The NDRC decides how the conditions for foreign investment in each particular economic sector are structured.

However, the negative list is less clear-cut than it appears. The NDRC, the Ministry of Commerce, and the local government all have wide ranging powers to decide case-by-case about foreign investments. The Foreign Investment Industrial Guidance Catalogue, published by the NDRC, provides the legal basis for this. The catalogue lists the branches of the economy in which foreign investment is “permitted”, “restricted”, or “forbidden”. Republished in 2017, the catalogue’s newest edition reduces the count of restrictions or special guidelines for foreign investment from 93 to 63. Regulations were loosened for the service sector, including areas such as accounting and auditing, transit, and sea freight. In the manufacturing sector, restrictions on investment in the production of goods for railways, in research and development of automatization technology, and in the production of batteries for electric cars have all been lifted. In the future, foreign companies will even be able to count on assistance and support when investing in emerging technologies such as 3D-printing or virtual reality.

The negative list currently being tested in the Pilot Free-Trade Zones is meant to eventually take force throughout the country and will replace the investment guidance catalogue published by the NDRC. However, when and if this will take place remains unclear, as the NDRC would lose an effective instrument for protecting domestic firms from foreign competition. The PFDZs’ negative list is markedly less extensive than the NDRC’s catalogue.

To add to the difficulties faced by foreign firms and investors, there exists beyond the negative list and the catalogue yet another list of investment restrictions that both Chinese and foreign firms must observe. The Pilot Free-Trade-Zones’ experiment has thus not yet proven a success: for foreign companies, the pilot zones do not necessarily offer more freedom than other areas within China. The regulations of the negative list and those of other national regulations sometimes overlap or contradict each other. China has promised improvements in this area.  But for now, getting to the bottom of what is possible and what is not when doing business in China remains an exceedingly difficult proposition.

China is coming back to Europe (in German) (WDR)