A collaborative G20, but tensions with China loom

At last week’s G20 meeting in Rome, the Italian Presidency managed to navigate a complex geopolitical global environment and bring home a global corporate tax, commitments for the delivery of vaccines worldwide and a modest climate pledge. Yet, on the side of the summit, tensions with China kept shaping the conversation.

In a now well-established fashion, Xi Jinping did not attend the summit in person and only delivered his speech via video. The Chinese President seems determined not to leave his country, be it to avoid contamination or to make sure he is physically present supervising what really matters i.e., internal affairs. In his place he sent his Minister of Foreign Affairs, Wang Yi.

Xi’s absence most likely had an impact on how much the summit was able to achieve. Wang’s mandate was limited. Throughout the G20 summit, Chinese delegates had to confer back with Beijing before committing to anything. Intermediaries and distance must have made the negotiations rather cumbersome. Had Xi gone to Rome, the summit would have presented an occasion to shorten those distances. However, he was not the only leader who was physically absent. The Russian President, Japan’s prime minister and the Mexican President also sent delegates to Rome.

The global corporate tax and pledges to reach 40 percent global vaccination rates by 2021 and 70 percent by 2022 are only part of the success story. Before the summit started, members – including China – agreed the Common Framework for Debt Treatments, a common framework for the restructuring of government debt.

China recognizes the value of the G20 as a format – a gathering of global leaders that includes not just Western countries, and one in which China can weigh in on attempts at setting global standards.

China’s growing influence was, however, also the catalyst for another significant achievement that was concluded in Rome. The United States and the EU succeeded in bringing to an end a three-year long dispute with the EU over the production of steel and aluminum. The next step will be the adoption of a “green” deal for the production of these materials in the next two years. The deal has a two-pronged objective: ease tensions between the transatlantic allies and expand joint action to counter China. President Biden did not make it a secret what the main targets of the new deal will be: “dirty” aluminum and steel produced by countries such as China.

The side initiatives fostered by the G20 also include a Statement on Principles for Supply Chain Resilience, which followed a discussion amongst the United States, the EU, Australia, Canada, Democratic Republic of the Congo, Germany, Indonesia, India, Italy, Japan, Mexico, Netherlands, Republic of Korea, Singapore, Spain and the United Kingdom. The main topic? Establishing the pillars required for strengthening the resilience and security of global supply chains, with a view to a dedicated summit planned for 2022.

The Inter-Parliamentary Alliance on China (IPAC), a group of parliamentarians advocating for a stronger response against China’s violations of human rights and threats to democracies, gathered in Rome at the same time. The parliamentarians aimed to remind G20 leaders and the world that China continues to pose a threat to democratic values. Unsurprisingly, the main themes on the IPAC agenda included Hong Kong and the request to lift extradition treaties with China, the violation of human rights in Xinjiang and Taiwan.

Taiwan has recently become a hot topic in the EU, and China knows it. On top of the report on Taiwan released by the European Parliament, and the visit of Joseph Wu to Brussels, a delegation of MEPs is now in Taiwan (more on Taiwan-EU below). A few hours before the summit, Wang made clear how concerned China is about the increasing support for Taiwan. In a warning to countries backing any form of recognition of Taiwan, Wang clarified that there is no acceptable alternative to the One-China policy. Those who support Taiwan in a manner that would endanger the long-standing principle will be met with an intransigent response from Beijing. If there was any doubt about the seriousness of Beijing’s commitment to its word, one should look at the coercive response to Lithuania’s decision to welcome the opening of a Taiwanese representative office.

China Railway considered temporarily halting EU-China rail traffic last week at two of the busiest Chinese border rail crossings in Alashankou and Erenhot. The decision, revoked soon after it was announced, was supposed to help deal with rail congestion created by an increase in traffic together with increased border controls.

Over the course of the first nine months of 2021 the volumes transported between Europe and China via these crossings increased by 36 percent year on year, while Covid-19 cases discovered on the border led to the introduction of time-consuming restrictions. The authorities are looking to increase flow through alternative routes.

Review: No new climate pledges from China at COP26

The COP26 UN climate summit running in Glasgow from October 31 to November 12 brings together world leaders to intensify efforts to tackle the climate crisis.

Quick take: President Xi’s downscaled participation combined with the lack of new pledges and the focus on the responsibility of developed economies show that China is reluctant to take a leadership role on climate in multilateral frameworks. Recent domestic energy shortages that pushed Beijing to increase the output of its coal power plants must also have played a role in the Chinese leadership’s climate ambitions in the buildup to the summit.

We will reevaluate the prospects of an effective EU-China climate cooperation in the next issue of MERICS EU-China Opinion Pool. 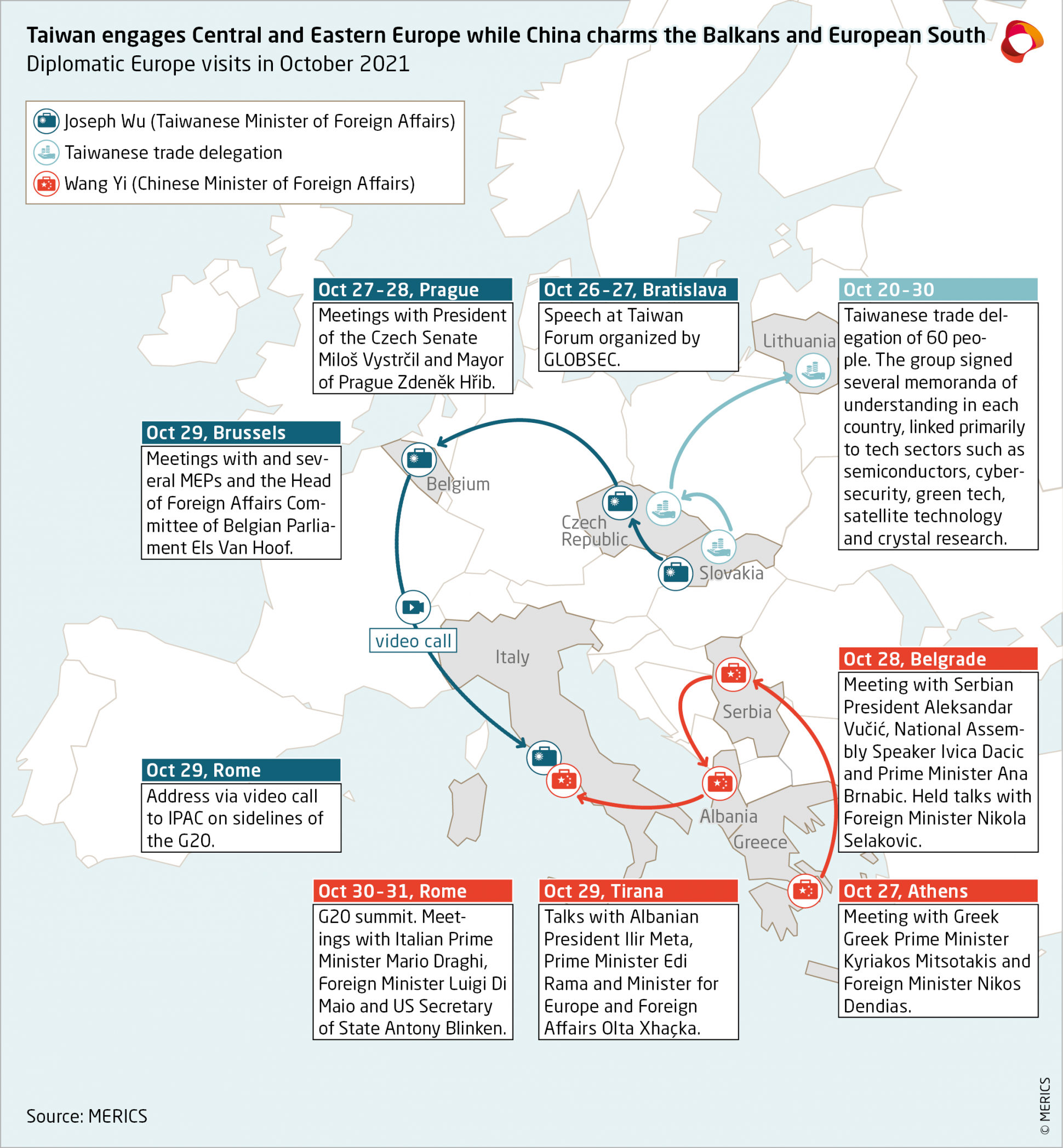 Quick take: Taipei’s charm offensive has been most effective in Central and Eastern Europe. These states are disillusioned with China after it failed to fulfill its economic promises under the now 16+1 framework. At the same time, they are interested in Taiwan’s tech capabilities, share historical parallels with the island and have a security stake in messaging alignment with Washington on China. However, it is mostly lawmakers, rather than governments, that are driving the engagement with Taiwan. To succeed in the longer-term, Taipei will need to show its commitment to the signed memoranda and show that, in contrast to Beijing, it will deliver.

On his way to the G20 summit in Rome, China’s Minister of Foreign Affairs, Wang Yi, stopped off in European countries that are traditionally friendly towards China: Greece, Serbia and Albania.

Quick take: Rather than an attempt to re-engage Europe, Wang’s tour was used to flaunt some of China’s European friends. The countries being targeted were solely ones that are known to be friendly to China. Notably, it did not include any EU member state from the CEE, whose relationship with China has been going through a rough patch. If anything, Wang’s tour demonstrated China’s increasingly selective foreign engagement.

The French President called for greater Chinese commitment on climate and increased trade reciprocity towards the EU. The Chinese leader advocated for the EU to double-down on its strategic autonomy agenda, which is understood as an initiative to limit its reliance on the US.

Chinese investors sold their holdings in Spanish waste-management, food and logistics companies – Urbaser, GM Food, Logicor logistics – constituting major divestments. One of the reasons for these moves is the strengthening of anti-takeover measures, including an obligation for non-EU investors to seek approval for over 10 percent purchases of strategic companies.

The report, released on October 18, highlighted the modest growth of Chinese companies in Europe and their concerns about the increasingly regulated legal landscape.

Minister Anja Karliczek sent her message in a dedicated letter to rectors of German universities. The move follows the Chinese government’s successful interventions to cancel book events focused on President Xi that were to take place at the Universities of Duisburg-Essen and Hanover.