The Lithuania-China fallout over the opening of the Taiwanese Representative Office in Vilnius recently made headlines. But European decision-makers have long been debating on the bloc's potential revision of its Taiwan policy. Already a year ago prominent European policymakers released a piece arguing for “revisiting Europe’s ‘One China Policy’” while the EU organized the first EU-Taiwan investment forum.

Subsequently, tensions between Brussels and Beijing over the human rights sanctions and calls for studies into the origins of Covid-19 sparked discussions on Taiwan-related policies. Politics aside, Taiwan’s significance to the EU became apparent during the pandemic given its dependence on the self-ruled island’s role as a leading exporter of semiconductors which suffered huge delays.

The European Parliament pushes for closer ties to Taiwan

The European Parliament Foreign Affairs Committee voted in favor of the first ever standalone report on EU-Taiwan relations at the beginning of the month. The report provides important indications about the closer – and to a certain extent bolder – direction the relationship should take. Although the document explicitly states the EU’s commitment to the “One China Policy” it also proposes an upgrade of the relationship with Taiwan. Should it materialize, it will not go down well with Beijing.

The report called for a closer partnership in the fields of electric vehicles, smart manufacturing and semiconductor technology, as well as R&D collaborations in the framework of the Horizon Europe program (2021-2027). Perhaps, the two most controversial points within the report are the recommendation for the European Commission to prepare an impact assessment for a Bilateral Investment Agreement (BIA) with Taiwan and the proposal to rename the European Economic and Trade Office in Taiwan to The European Union Office in Taipei. However, it remains to be seen if the Commission will take on any of those two the Parliament’s proposals.

Before the Commission could proceed with plans for the impact assessment and the renaming of the EU office in Taiwan, it must first find significant support from member states. Yet member states reactions to Beijing’s fallout with Vilnius have been relatively low-key as the European capitals continue to exercise caution when discussing forming closer ties with Taiwan.

While European lawmakers –including nine chairs of national Foreign Affairs Committees – supported Lithuania’s position, governments have been less inclined to do so. Several governments and current Slovenian EU Presidency criticized China’s economic coercion towards Lithuania, but steered away from explicitly supporting the Baltic states’ position. This is in line with how European capitals dealt with the backlash from Beijing after Czech Senate President’s Miloš Vystrčil’s visit to Taiwan a year ago. The US government, however, endorsed Lithuania’s stance and is reportedly considering allowing Taiwan to rename its representative office in its capital.

Another diplomatic sign of reluctance to vocally support engagement with Taiwan is the fact that only four Central and Eastern European (CEE) members (Czechia, Lithuania, Poland and Slovakia), decided to send vaccine donations to the island. In response, Taipei plans to send a 65-strong mission to Czechia, Slovakia and Lithuania in October to promote its investments in the CEE region. Poland’s donation amounted to 400,000 doses, making it the third biggest doner to Taiwan after Japan and the US. However, Warsaw clearly reiterated its commitment to the “One China Policy.” Such developments suggest that European governments are not likely to adopt the pro-Taiwan agenda championed by Lithuania at this stage. 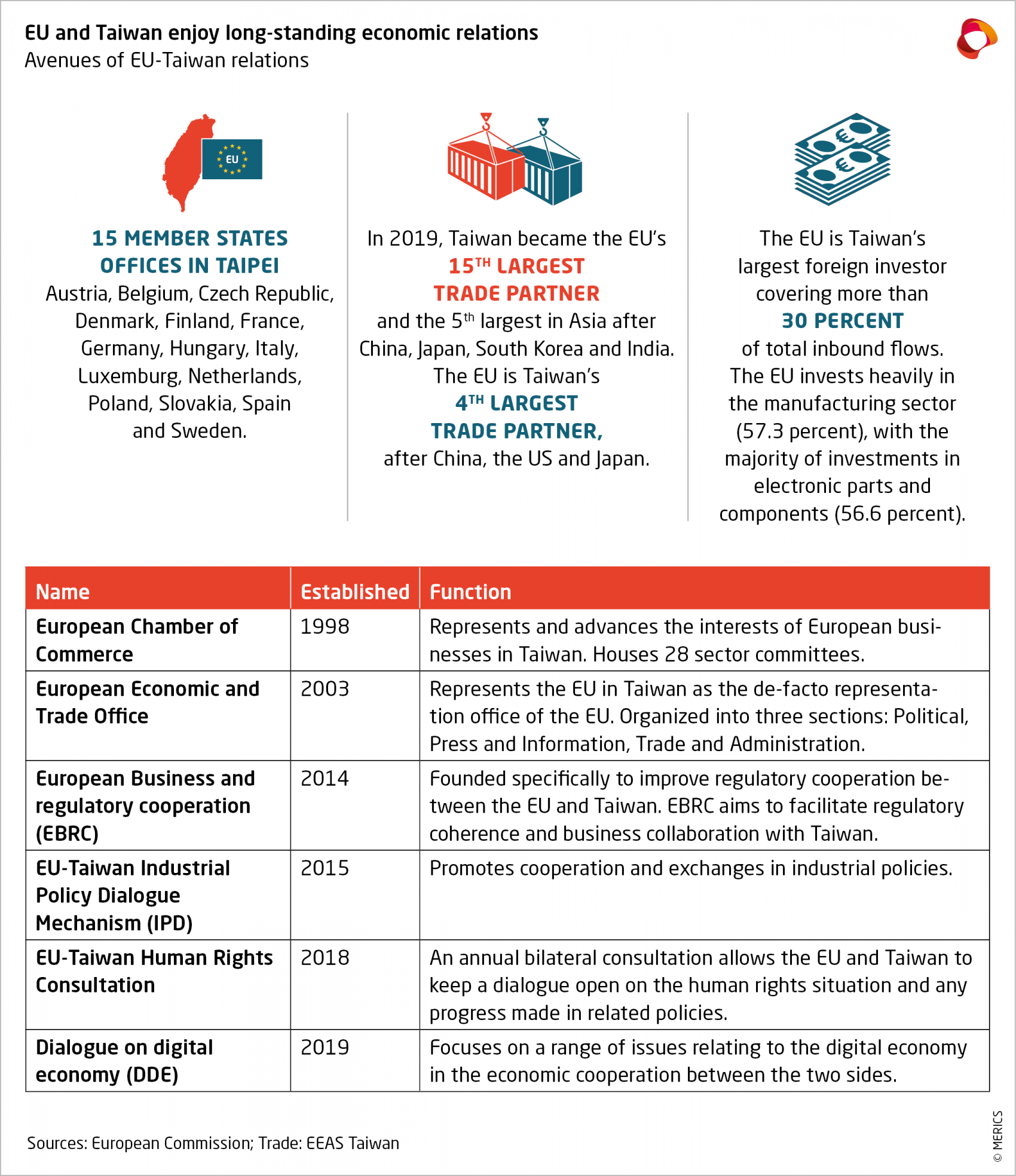 Taiwan supplies the EU with an essential amount of their semiconductors, making it a fundamental trade partner. At a time of chip shortages, Taiwan reaffirmed its commitment to work together with the EU to strengthen the supply of this critical good. There is a rumor circulating about the potential construction of a TSMC plant in Europe. In addition to semiconductors and mainly due to the pandemic, medical supplies have become another important area of collaboration between the EU and Taiwan. This includes medical products such as airway pressure masks, disinfectant and surgical masks.

The importance of this relationship reaches beyond economic ties, attested by the numerous fora in which the two collaborate and share information. Taiwan is an important interlocutor in discussions on democratic resilience and partner in addressing the challenge posed by Beijing in the region and beyond.

The EU and Taiwan may find new opportunities for increased cooperation in the upcoming European initiatives. Under the upcoming New European Chips Act, Taiwan can become a key EU partner to expand its semiconductor production. The pair may, however, have to manage the increased competitive dynamic created by the EU’s initiative. The bloc’s Indo-Pacific strategy also offers a constructive framework for further developing EU-Taiwan economic relations as the European countries seek to diversify their supply chains in the region.

If the latest developments speak of a relationship that means the EU could be growing closer to Taiwan, neither the EU nor Taiwan are interested in pushing Beijing too far. This means that changes in EU-Taiwan relations and new agreements such as the potential BIA are more likely to follow modest, but positive developments.

President Ursula von der Leyen unveiled The EU’s new “Global Gateway” connectivity initiative during her State of the Union address. Von der Leyen explicitly referred to China in the announcement stating that the EU wants to be strategic about its investments to avoid becoming a simple connector between Chinese projects worldwide. The initiative will also follow a values-based approach and promote “links and not dependencies.” The President has not announced specific funding or institutional structure.

The European Commission published the EU’s Indo-Pacific Strategy on September 16. The policy signals the vision for the EU’s role in the region that is vital to both the US and China. 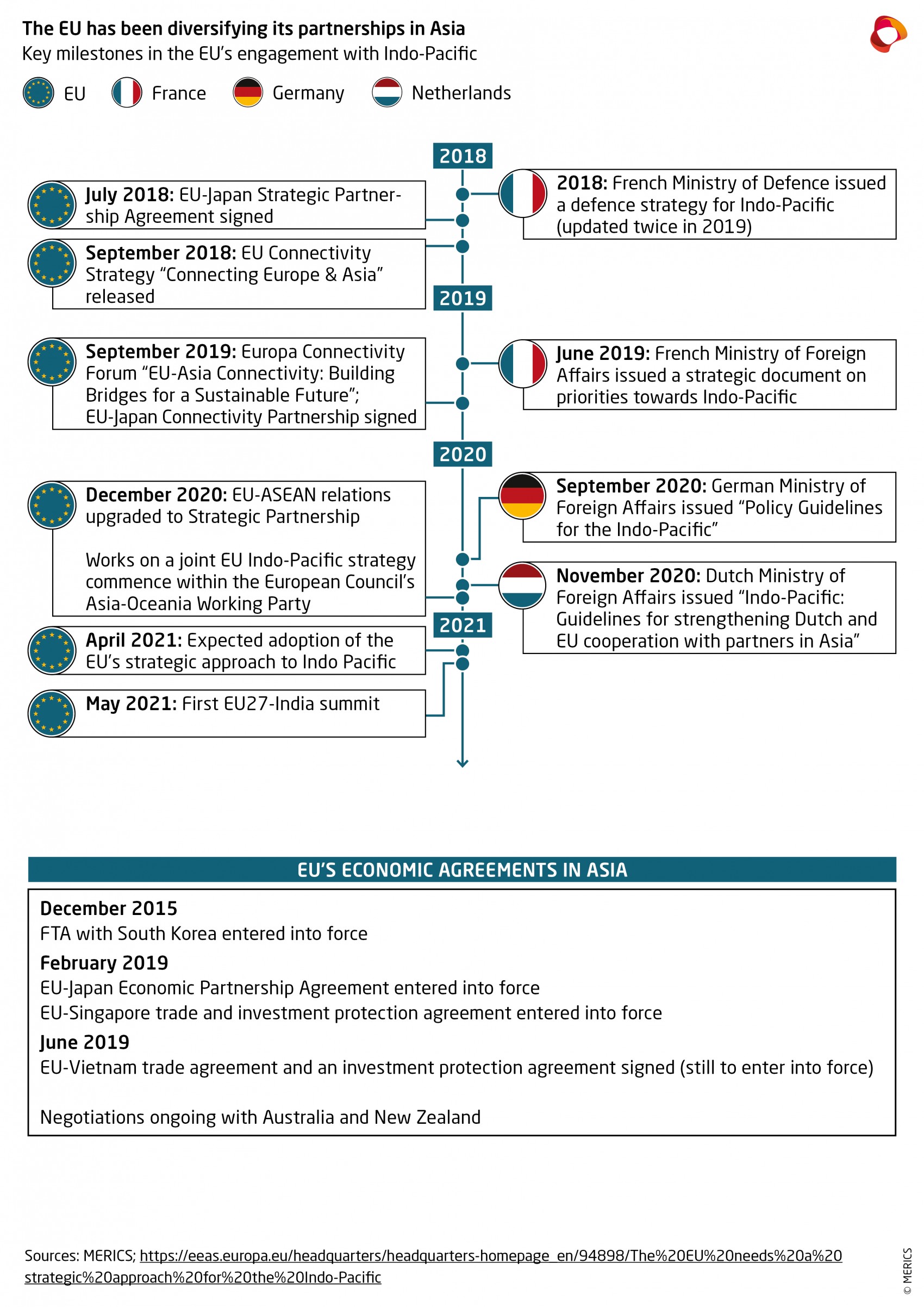 The EU’s Indo-Pacific strategy remains primarily an economic security exercise. The bloc aims to support the region’s stability to maintain resilient supply chains and to challenge China’s growing influence in connectivity and standard setting. However, the EU's position in the region remains constrained by its limited power projection and member states' reluctance to take a clear position on regional tensions. As the security tensions rise, the bloc is likely to face a tough task to increase its influence in the Indo-Pacific.

For more analysis of the strategy subscribe to the next issue of our MERICS China Essentials (subscribe here).

No clear revision of China policy after Council and Parliament discussions

The Council of the European Union and the European Parliament have recently been discussing their positions on the EU’s China policy. The outcomes indicate that the current EU’s attitude towards China remains ambivalent.

As this fall begins, the EU’s calendar is filled with events on its China policy, but it continues to struggle to form a clear and united message on its strategic priorities towards China. During the first half of the year, decision makers have frequently called for increasing assertiveness, imposing sanctions and boosting transatlantic cooperation vis-à-vis China. Now this sentiment seems to be somewhat tempered. The European capitals and Brussels have growing interest in unblocking the channels of communication with Beijing, especially in the aftermath of the Afghanistan withdrawal. While the upcoming China policy reassessments by the Commission and the Council offer a platform for revisions, the EU is likely to remain committed to a multi-faceted approach of balancing between assertiveness and engagement with China.

Potentially, this could become an important but rare instance of retroactive cancelling of an acquisition. Two important takeaways: First, Italy possesses a strong and rather comprehensive screening mechanism for foreign direct investments, the Golden Power. However, generally a weakness of the FDI screening is the notification procedure. If companies, or states in the case of the EU, do not notify the screening body, then risky acquisitions can neither be assessed nor prevented, as in the case of Alpi Aviation. Second, measures of economic security are interlinked, and in this case, an issue regarding export control revealed a probable breach of FDI screening. Thus, to have an efficient approach, the EU should go ahead with the adoption and strengthening of other related tools, such as the foreign subsidies instrument and the international procurement instrument.

The Chinese and German readouts from the phone call on September 10, differed considerably. The Chinese side included the mention of the Comprehensive Agreement on Investment whereas the Germans did not. According to both documents, the German Chancellor pushed for cooperation on the current situation in Afghanistan.

The inaugural meeting of the TTC will take place this year on September 29. The Council, with its 10 working groups, may become the key channel for managing transatlantic cooperation – including on issues pertaining to China.

The Speakers of House of Commons and House of Lords announced the decision ahead of an event on September 15 that Ambassador Zheng Zeguang was to attend. The ban is to remain in place until sanctions targeting MPs are lifted.

EU export rules on dual use goods enter into force

The dual use goods rules, adopted in March earlier this year, impose export restrictions on goods such as drones, surveillance programs or certain chemicals. The EU wants to avoid European tech being used in authoritarian endeavors, including in China.

Hungary signed an agreement with Sinopharm to locally produce vaccine

The government is planning to invest EUR 157 million in infrastructure to produce vaccines and aims to be self-sufficient by the end of next year. Hungary remains the only EU country to roll out the Sinopharm vaccine.