Questions in Europe about returning to business as usual with Beijing

Top Story: Questions in Europe about returning to business as usual with Beijing

A growing consensus among European governments holds that China should take some responsibility for the coronavirus pandemic and that states should take a firmer line. Some governments struggling to battle Covid-19 have been particularly vociferous about the need for a more resolute approach. UK lawmakers from the ruling Conservatives have set up the China Research Group to help shape a tougher policy, while regional politicians from Italy’s far-right Lega, the main force in the regional government of hard-hit Lombardy, are planning to ask Beijing for compensation.

But by no means all European governments are interested in demonstrative rhetoric that is meant for domestic as much as foreign audiences – a play also favored by US President Donald Trump as he pedals an unsubstantiated theory about a laboratory leak. But lawmakers in Germany and Sweden have called on the European Union to investigate the origins of the pandemic, and EU Commission President Ursula von der Leyen said she would welcome China’s co-operation in doing so.

So different parts of Europe could follow different paradigms – but all could have implications for EU-China relations. Naivety has been giving way to a more clear-eyed approach, although Europe will still treat China as a partner for tackling global issues – like vaccine development – and economic cooperation. Despite becoming more clear-eyed about China, the EU still has vulnerabilities, as shown by EU High Representative Josep Borrell, who had to defend the EU’s European External Action Service following allegations it softened a report on disinformation after pressure from Beijing.

Merics analysis: “While the Covid-19 crisis is prompting many in Europe to voice growing skepticism towards the Chinese government, we shouldn’t overlook other important players who continue to promote very positive views about Beijing during this pandemic – a counterweight that needs to be factored in when assessing the impact of the pandemic on Europe-China relations,” says Lucrezia Poggetti. “In Italy and Serbia, for example, ruling Eurosceptic, populist leaders at national level have served their own political agendas by amplifying positive stories about Beijing’s handling of Covid-19 and its generosity – and they have stayed away from criticism and calls for transparency.”

More on the topic: MERICS recently contributed to a study of the European Think-tank Network on China, on Covid-19 and EU-China relations. More here.

That’s the altitude of a camp on Mount Everest in which China Mobile wants to install two 5G base stations to provide mobile coverage up to the summit of the world’s highest mountain. Under a connectivity project together with Huawei, the network operator has already installed 5G base stations at altitudes of 5,300 and 5,800 meters. According to media reports, the cost of installing each unit on Everest amounts to one million Yuan (USD 140,000), almost five times as much as a regular station. (Source: RCWireless)

The facts: Accusations by US President Donald Trump, his officials and Republican legislators that China is culpable for the global pandemic seem driven by the need to deflect public attention from the Trump administration's handling of the crisis. Despite much scientific opinion to the contrary, the Trump administration and its allies have focused on the possibility the virus came from a laboratory in Wuhan.

What to watch: US intelligence agencies have reportedly been pressured to produce evidence of a connection to the Wuhan lab. But the relevance of a leaked intelligence dossier that deals with the “lab leak” theory has been downplayed by officials. Commentary in Chinese state media has exploited the weak evidence coming from Washington and the Trump administration’s clear interest in shifting blame for the epidemic situation inside the US.

MERICS senior analyst John Lee says: “Politicization of this issue will likely continue to increase throughout the US presidential campaign and further inflame relations with China. Other governments could help de-escalation by declining to support campaigns against specific countries and focusing instead on an independent inquiry into the virus’ origins – even if China strongly opposes this at present.”

The facts: Official depictions of young people’s lives sparked a backlash among younger Chinese as the country earlier this week celebrated Youth Day, the official commemoration of the student-led anti-imperialist May Fourth Movement in 1919. Party-state media used the popular video platform Bilibili to publish a clip called “The next wave: A speech by Bilibili for the new generation” featuring the actor He Bing. “I look at you, full of envy (…) You now have the right we used to long for – the right to choose,” the 52-year-old told his viewers and praised their ability to take in “more pluralistic culture, aesthetics and values.” The video went viral and sparked a controversy among China’s young netizens.

What to watch: Articles shared on the social media platform WeChat criticized the clip for glossing over the actual life of young Chinese and for disregarding the pressures they face at work and in big cities, their fears for the future, internet censorship etc. The reactions show the discontent of many young Chinese. But it is unclear whether Beijing takes note of these reactions or is aware of the discrepancy between official expectations – to display national pride, for one – and different aspirations of the younger generation.

The facts: Chinese technology companies are forging closer ties with their European partners in an attempt to prevent future business disruptions caused by the tightening of US export restrictions. Telecom-equipment maker Huawei is reportedly co-designing mobile and automotive-related chips with French-Italian chipmaker STMicroelectronics in a bid to ensure continued access to crucial American chip-design software. This comes as the US Commerce Department is drawing up new export rules that double down on blocking the export of sensitive technologies to military end-users.

What to watch: With more rule changes looming, it is not certain that collaborations with European companies can shield Huawei and its peers from US restrictions. Proposed changes to the Foreign Direct Product Rule could enable the US to prevent even European companies that use American-made chip-design tools or manufacturing equipment from supplying Chinese tech companies.

MERICS analysis: Partnering with European companies for chip design or manufacturing support can only be a short-term solution for Huawei. In the long-term, the company will need to move design and manufacturing capabilities entirely in-house or to domestic partners. This process is already underway: HiSilicon is reported to be shifting production of its chips from world-leading Taiwanese foundry TSMC to China’s best alternative, Semiconductor Manufacturing International Corp (SMIC).

More on the topic: Read Caroline Meinhardt’s blogpost on how Chinese tech companies are turning to European suppliers and collaborative projects to cut their reliance on US suppliers.

GRAPHIC OF THE WEEK 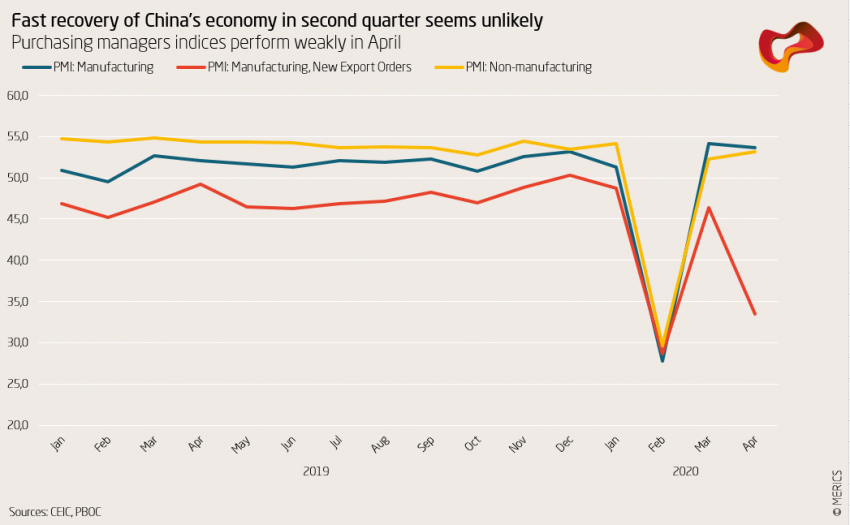 Purchasing managers indices fell again in April, with the sharpest drop coming from the manufacturing sector’s export orders. After recovering in March, the index fell back again to near February levels. The weak PMI numbers make a sharp recovery of economic growth in Q2 very unlikely.

Tens of thousands of members of the Asian diaspora are all too familiar with the story: the difficulties family forebears faced when they first decided to move abroad – cutting ties with what they knew as home, leaving friends and family behind for an uncertain but hopefully brighter future. “Tigertail” doesn’t have the pomp of “Crazy Rich Asians”, nor the emotional ballast of “Farewell”, but it’s an important contribution to the genre of Hollywood blockbuster led by Asian and Asian-American actors.

The movie shows its main character, Pin-Jui (Hong-Chi Lee, later Tzi Ma), in two very different phases of his life – as the young factory worker, aspiring to leave Taiwan for a better life in the US, and as a lonely and bitter retiree, reminiscing about his questionable success. Beautiful depictions of Taiwan in the 1960’s, with music from Yao Su Rong and Otis Redding, go hand in hand with scenes that show the sacrifice and emotional toll that come with migrating from one side of the globe to another.

The release of “Tigertail” on a US streaming platform on April 10 came at a time of US-China tensions and huge coronavirus-induced demand for streaming services. “You add to that this anti-Asian sentiment that’s been going around, and it’s a strange, weird, ironic, perfect storm of circumstances for the movie to sadly be relevant”, says director Alan Yang to explain the movie’s positive reception. “When I tweeted the trailer out [...], the response was overwhelming. It felt like people wanted to see Asian faces. They wanted to see a movie about connecting with others, that dimensionalizes Asian people.”

Huang Runqiu is the Chinese government’s new Minister of Environment and Ecology (MEE) and a symbol of how seriously Beijing now appears to be taking green issues. The 56-year-old geologist is only China's third minister since the late 1970s who is not a member of the Chinese Communist Party, a clear signal Beijing prizes expert knowledge over ideological credentials for this particular post.

Born in Hunan province in 1963, Huang studied and taught at what today is called Chengdu University of Technology, rising to become its vice president and head of a major geo-environmental protection laboratory. In parallel, he followed a political career in the Jiusan Society, popular with intellectuals and one of eight major legally recognized political parties that follow the direction of the Communist Party.

Huang came to Beijing in 2016 as vice minister of Environmental Protection and became vice minister of the new MEE two years later. In this position, he took charge of negotiations about a new global biodiversity treaty that could be finalized this year. Still, not being a CCP member, Huang is outranked in his new job by environmental neophyte Sun Jinlong, the MEE’s new Communist Party Secretary.

Top Story: Questions in Europe about returning to business as usual with Beijing
METRIX
Heated rhetoric in US over China’s responsibility for the coronavirus’ origin
Video on national Youth Day sparks backlash among young Chinese
Chinese tech companies seek European partners after US ban
GRAPHIC OF THE WEEK
REVIEW: Tigertail – a movie by Alan Yang (2020)
PROFILE: Huang Runqiu – geology, not ideology
MERICS China Digest
Print this Article
Share this Article

EU-China Mappings: Interactions between the EU and China on key issues