New MERICS study on Made in China 2025

“Germany is too eager a supporter of China’s industrial strategy”

Four years ago, China launched its ambitious industrial strategy Made in China 2025 and caused considerable irritation around the world. The blueprint for China’s path to becoming an industrial superpower has changed the way foreign companies, business associations, and governments view the country. They increasingly perceive the People’s Republic more as a systemic rival than a partner. Made in China 2025 has recently disappeared from official rhetoric of the Chinese leadership. But Beijing’s aims remain unchanged and its industrial policy is already being implemented. Beijing wants Chinese companies among global leaders in ten core industries by 2025. And it aims to be a global technological superpower by 2049.

The two MERICS authors, Max J. Zenglein and Anna Holzmann, describe Made in China 2025 as an effort by Beijing to optimize its hybrid state-capitalist system. Their study “Evolving Made in China 2025: China‘s industrial policy in the quest for global tech leadership” will be presented in Berlin today. It traces how Beijing has adjusted its industrial policy, reacted to setbacks, set up pilot projects, and invested heavily in research and development in strategically important industries in the recent past. 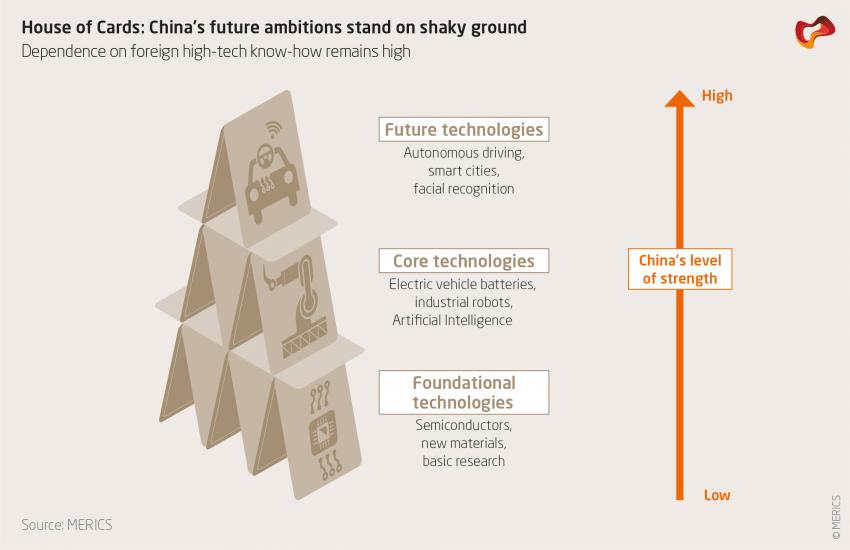 Most importantly, the report describes the Chinese government’s efforts to steer an economic system that aims to strike a balance between the free market and state control, private companies and state-owned enterprises in order to reduce the country’s reliance on foreign partners and foreign expertise in the long term.

Many of China’s recent technological advances – including artificial intelligence, alternative-energy vehicles, facial recognition, big data, digital payments, communications systems – are the result of innovation on the part of private companies. In the context of its industrial strategy, Beijing’s explicit aim is to foster cooperation between private companies and still-dominant state-owned enterprises.

By the end of 2018, the Chinese government had published a total of 445 official documents detailing the implementation of Made in China 2025 strategy. It is unclear how much money it has spent on the strategy. But last year alone, China invested about 300 billion USD in research and development, nearly 2.2 percent of its GDP. About 4,000 pilot projects to introduce new technologies were announced. There are 30 nationwide projects, each designed to spur the development of one specific industry. So called National Demonstration cities and Zones, only opened last year (in Ningbo/Zhejiang for example) already provide a home for a number of promising centers for smart manufacturing.

Chinese companies are aiming for global dominance in strategic industries

In traditional high-tech sectors like aviation, machine tools, and software engineering, Chinese companies face the challenge of catching up with foreign competitors. In sectors like smart manufacturing, digitization, and emerging technologies, however, China aims to leapfrog competitors to secure a globally leading role. In some sectors, Chinese companies are already very successful: In 2017, seven of the world’s top ten electric-vehicle battery companies were Chinese. In telecommunications, companies like Huawei or ZTE were spearheading the roll-out of 5G networks until the trade dispute with the United States erupted. The two companies’ recent trials and tribulations also point to China’s main weakness: its dependence on foreign tech.

Lack of technological expertise is the Achilles’ heel of Chinese ambitions

To reduce its dependency on foreign expertise, the Chinese government wants to convince foreign companies to move the most sophisticated parts of their value chains to China. Companies reluctant to do so may get promises of improved access to the huge market that is China – or they simply get bought by a Chinese competitor. Foreign companies with expertise useful for China’s industrial strategy in particular stand to benefit in the short term. In the long run, Made in China 2025 will erode the competitiveness of other nations in a number of high-tech sectors.

No other country is explicitly named in China’s innovation strategy as often as Germany. Zenglein and Holzmann warn that Germany is too eagerly supporting China’s innovation offensive through economic and research collaborations that could end up damaging the foundations of its economic strength. They assert that China’s most important trade partner in Europe is still acting like the two countries were partners and not competitors, for example ignoring that smart manufacturing is a central component of the Chinese industrial strategy. China still needs extensive cooperation with Germany in the fields of technology, industry and innovation.

Generous offers by the Chinese side have made German technical universities and major research organizations important and willing actors in this cooperation. The risks that come with such ties are not being discussed enough, the authors caution. They advise the development of stricter criteria for technological cooperation, better security measures to prevent the unwanted transfer of technology and expertise, more information exchange between companies, industry associations, and governments, and a common European innovation system. Taiwan and Japan could serve as role models. They have adapted policies in the light of Beijing’s strategy and are now stricter about investment in and research cooperation with China.