Beijing fills gaps left by Brussels in the Western Balkans

Amid scenes of medical equipment arriving from China as the Covid-19 pandemic took hold in 2020, Serbia’s President Aleksander Vucic called European solidarity a “fairytale” and said that the Chinese “were the only ones who can help us.”1

In 2021, Vucic has had further reasons to compare Beijing favorably with the EU. Serbia has led one of Europe’s most successful vaccination campaigns, using a vaccine from Sinopharm, a Chinese state-owned pharmaceutical giant. By contrast, the EU is failing to vaccinate its own people, let alone provide doses to its Balkan neighbors.

The “Western Balkans Six” - Albania, Bosnia & Herzegovina, Kosovo, Montenegro, North Macedonia, and Serbia - are all candidates or potential candidates for EU membership. In her 2020 state of the union address, President von der Leyen reiterated the pledge in the EU’s 2003 Thessaloniki declaration, that “the future of the Balkans is within the European Union,”2 and gave it added emphasis.3 Yet the region remains an outside area within Europe, subject to increasing attention from “external powers,” whose interests may not always align with those of the EU.

EU Commissioner Johannes Hahn sounded the alarm over Chinese investment in the Western Balkans in 2018 when he said it could turn the region’s countries into “trojan horses” that might one day undermine the EU from within.4

Since then, scrutiny of Chinese projects in the Western Balkans has grown; concerns have been voiced that the low standards of BRI projects might negatively impact the local environment, rule of law, financial sustainability, and ultimately the EU-integration prospects of the region.5 EU frustration may also be heightened by the potential for Chinese companies to eat into the market share of European companies.

Serbia hosts the vast majority of Chinese finance in the region; it is the Western Balkan’s largest market and the front runner for EU membership. Chinese companies have made several large greenfield investments in Serbia, largely financed by loans from China’s Export-Import Bank. The loans were issued for infrastructure projects and tied to con-tracts with Chinese state-owned enterprises (SOEs).

Some of these projects are at odds with EU expectations – for example coal fired power plants or corruption-plagued highway projects. Experience has shown that Chinese finance can fuel positive development when projects are well-chosen and implementation is prudent, or it can bring out the worst in corrupt local elites. The availbility of Chinese finance decreases the EU’s leverage to push for regulatory convergence.

At a broader geopolitical level, Beijing provides foreign policy flexibility for regional lead-ers. However, no one in the Western Balkans claims that the offer is more desirable than EU membership and European integration.

Beijing advances in vacuum left by EU’s lack of strategy

Beijing’s newcomer status confers advantages. While European, Russian, and Turkish partnerships carry historical baggage, Beijing arrives with a clean slate, promising interference-free development. In many countries, China serves as a foil to the regional hegemon, a dynamic that is at play between Beijing and Brussels in the Balkans.

China is mainly making use of spaces where the EU has been absent – for instance, building highways that North Macedonia and Montenegro had unsuccessfully sought funding from European partners for. Likewise, anti-Western narratives and frustration with the progress of European integration show China in a more positive light. 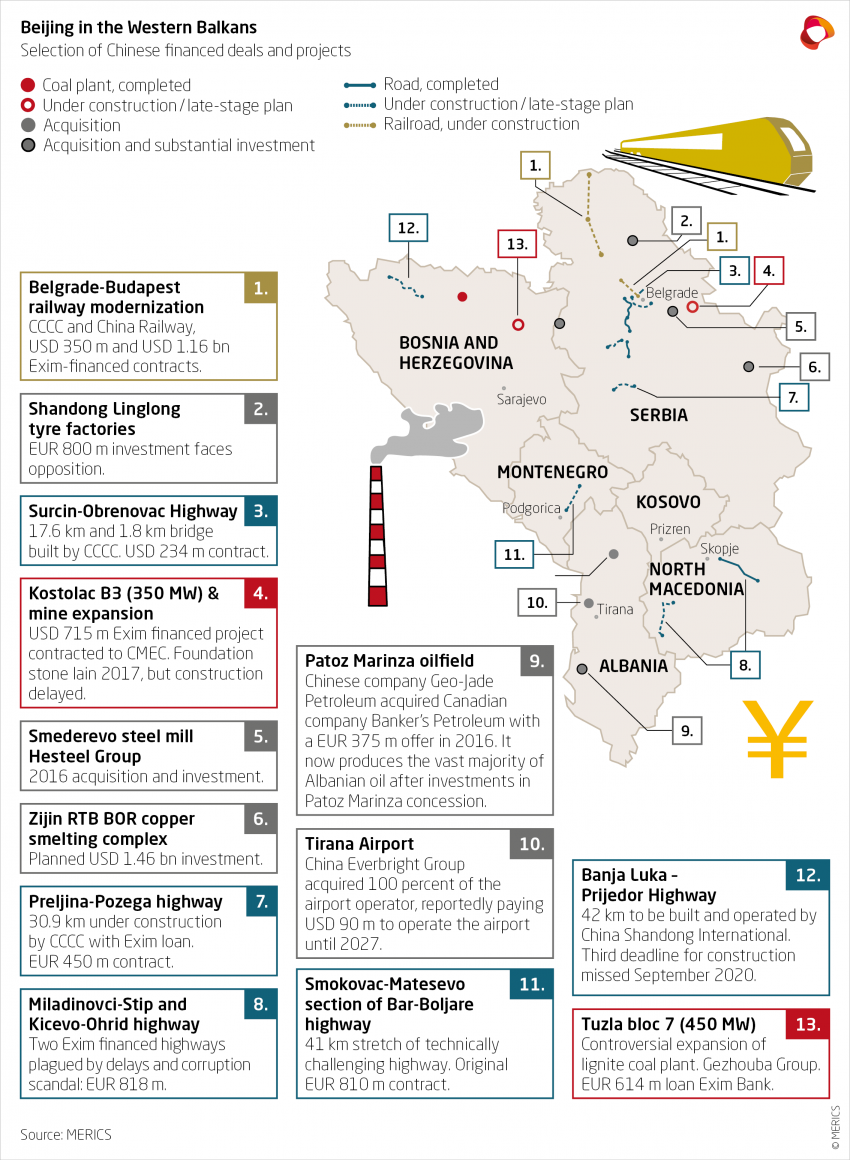 China’s growing influence there is symptomatic of the Western Balkan countries’ troubled relationships with the EU, which have other causes. The best way for Brussels to counter concerns about China’s influence would be to make greater efforts to listen to local needs and provide realistic, attractive alternatives to BRI projects and funds.

One step in the right direction is the EU’s new EUR 9 billion investment plan, which could provide sustainable alternatives to potentially corrosive Chinese capital.6 The Western Balkans is not the EU’s backyard or neighborhood – it is an “inner courtyard,” integral to the future of Europe, and hence an important arena for the work of the EU’s self-described “Geopolitical Commission.”7

You are reading an excerpt of our latest
MERICS Global China Inc. Tracker.

Only MERICS members have privileged access to this product. If you want to learn more about our membership model for institutions and businesses,
please click here.