During the celebrations of the Chinese Communist Party’s (CCP) 100th anniversary on July 1, the central position of Xi Jinping as core leader of the party, and for China, was made abundantly clear. Leading small groups and commissions form the strategic policy-making network around Xi, says Nis Grünberg. They have to be seen as the core of China’s political system.

Centralization of power is widely recognized as one of the most prominent features of Xi Jinping’s rule over China. His status as the Chinese Communist Party’s (CCP) “core leader” places him at the center of policy making. On top of the three titles – CCP General Secretary, Head of State, and Commander in Chief of the People’s Liberation Army (PLA) – that give him this position, he also chairs a dozen or so commissions and “leading small groups” (LSG) that serve as the nerve center of the party’s decision-making system. This MERICS mapping identifies the most important groups and explains their role in the party-state system. 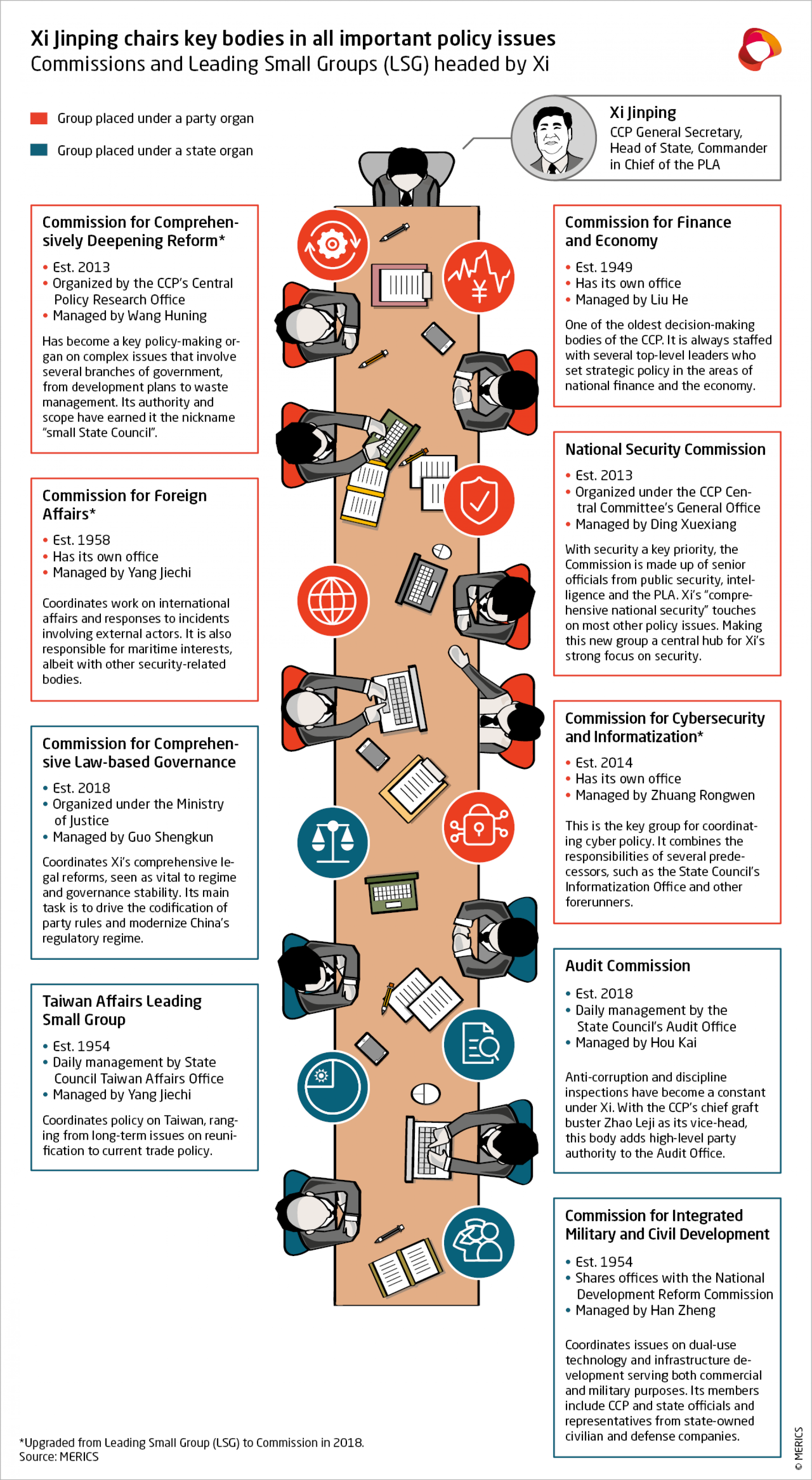 The use of commissions and leading small groups is nothing new in China – indeed some of today’s most important such bodies were established in the early days of the People’s Republic of China. Today, thousands of LSG exist at all levels of the party state. Each group comprises a chairperson, usually the highest-ranking official, and a director, who is in charge of managing the group, and representatives from relevant party and state bodies.

In China’s political system, bureaucratic rank is a crucial factor in decision-making. A chairperson who outranks the members of the group endows the group’s decision with an authoritative mandate that individual members cannot challenge directly. This gives these groups the ability to override any conflicts between the involved administrative units over policy responsibility, implementation or funding.

An LSG is usually established when complex issues or important tasks need to be coordinated across administrative bodies. An example is the recently established LSG to coordinate China’s CO2 reductions (碳达峰碳中和工作领导小组). To achieve carbon peak and neutrality targets by 2035 and 2060, respectively, it is responsible for coordinating ministries, regulators and industrial actors to prevent implementation getting stuck in tough negotiations. Temporary LSG are also often established as “project managers” for specific events or tasks, such as preparing for the 2008 Olympic games or managing large urban infrastructure projects.

Central commissions are usually institutionalized LSGs that have become central to operating the system they helped draw up. They are more formal bureaucratic bodies, operating as political supra-ministries coordinating policies under a common leader, Xi Jinping. Like the LSG, they clearly illustrate how the party state relies on hierarchical power to achieve outcomes and how difficult it remains to work out policy between different ministries or local government branches. This governance through top-down mobilization is effective for the specific tasks at hand, but also endangers more flexible policymaking, by many seen as the key feature behind China’s developmental success.

Central LSGs and commissions give Xi a seat at the table in all major policy areas. He chairs several of these bodies that outrank regular party and state bureaucracies like ministries. Covering everything from security to economy, digitalization to legal reforms, this core executive defines the political priorities under Xi’s watch and serves as his political nerve center.

That makes understanding the role of LSGs and commissions and LSGs so central – they have to be seen as the core of China’s political system. Furthermore, they tell us a great deal about the way the party state operates – preferably in a very hierarchical way as it sees top-down mobilization as the most effective way of dealing with issues of a certain complexity or priority.