In this MERICS Primer, Rebecca Arcesati and Caroline Meinhardt explore how China bets on open-source technologies to boost domestic innovation. For Beijing, open source is an industrial policy tool and important part of its push for technological autonomy. The analysis is accompanied by a slidedeck that provides context for and deeper insights on China’s open-source technology ecosystem.

When Huawei lost its license to use Google’s Android operating system in May 2019, the Chinese technology company doubled down on developing its own operating system: HarmonyOS. In 2021, Huawei plans to switch to this proprietary system for all its smartphones and hopes to turn Harmony into the world’s most advanced operating system for 5G phones and IoT applications. The system is open source, meaning that developers can access, copy, edit and share its source code.

HarmonyOS is just one demonstration of how important open-source technology development is in China, a country often seen as discouraging decentralized forms of innovation. China is bolstering the development of a vibrant open-source ecosystem. Participating in international open-source projects secures Chinese firms and developers access to foreign software and hardware. Chinese companies are also now active contributors to the international open-source community. For the Chinese government, open source is an industrial policy tool that could help reduce reliance on foreign technologies, amid expanding US export controls that are cutting Chinese companies off from American technologies.

What is ‘open source’?

Open source refers to a practice of developing and distributing tech whereby all coding is done publicly and collaboratively, usually in a public repository. The global open-source model is based on radical openness and transparency and was first used to develop software, but it can also be used for hardware development. Since source code is freely shared, modified and distributed, ​open-source tech is a vendor-neutral alternative to proprietary tech​. However, open-source code usually comes with a distribution license that determines how developers can use and distribute code, which may require developers to publish the source code for any software or programs that are based on modified open-source code.

China’s open-source journey began in the early 2000s as a government-led ICT policy story, as Chinese leaders were eager to mitigate reliance on US proprietary software. During the dotcom boom, the Chinese Academy of Sciences launched the government-funded Red Flag Linux project. It aimed to replace Microsoft Windows with the open-source operating system Linux, thereby boosting the development of China’s software industry.

An open-source community gradually emerged in the mid-2000s, with the government initiating several open-source software alliances and companies and developers coming together through communities and associations. China properly embraced Linux after the global financial crisis, when traditional industries had to cut IT costs while joining the government’s informatization push. The 2011 arrival of Android smartphones in China paved the way for the broader adoption of Linux and exposed China’s nascent software industry to open-source code.

China’s open-source movement continued to gain momentum with new technologies and increasing government support. In 2014, for example, the Ministry of Industry and Information Technology (MIIT) declared support for OpenStack, an open-source cloud computing infrastructure, and promoted it among state-owned enterprises.

Nevertheless, it took a while for Chinese companies to become active contributors to open-source software development. Cultural barriers and the closed nature of China’s internet may have played a role. This rapidly changed as tech companies and individual developers fully embraced open-source innovation and the government identified open source as an important part of its push for technological autonomy.

China has become a major consumer of and contributor to open-source technologies. Per a recent survey by the MIIT-affiliated think tank China Academy for Information and Communications Technology, 87.4 percent of Chinese firms use open-source technologies. Chinese users are the second most prolific group on GitHub after the United States, and two out of the top five most followed GitHub accounts are Chinese. 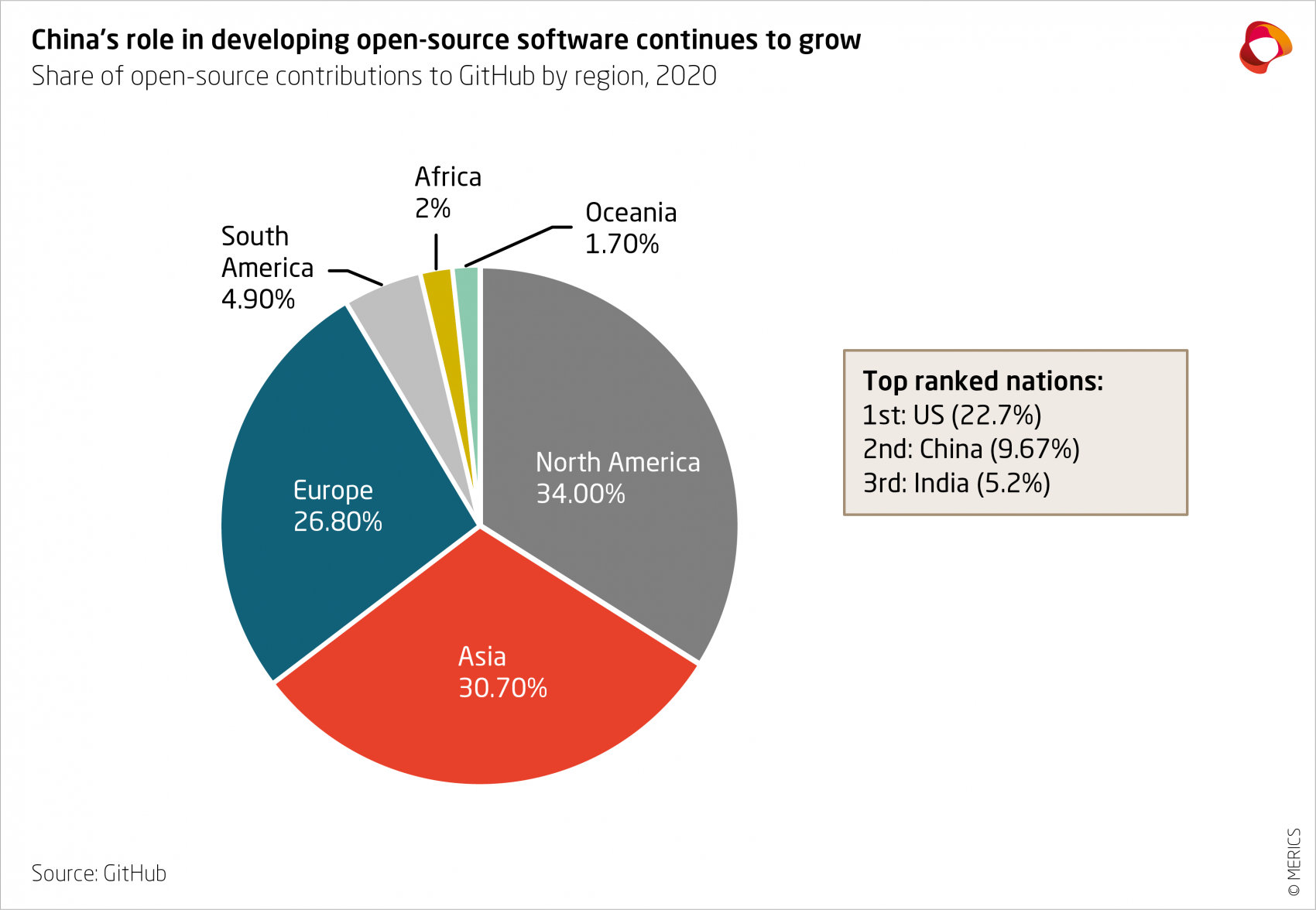 Contributing to the global open-source ecosystem

In recent years, leading Chinese tech companies’ involvement in international open-source communities has grown considerably. From 2012 to 2018, Chinese membership of the Linux Foundation increased by more than 400 percent. Tech giants are moving away from their early days of free riding. Chinese companies now make the third most contributions to the projects hosted by the Cloud Native Computing Foundation, for instance (See Slide 7).

Almost all major tech companies have open-sourced existing technologies or created new projects that they share openly. Companies benefit from open-sourcing their own tech as it raises brand awareness, helps attract and retain talent and incentivizes developers to use their platforms.

In the past two years, Baidu, Alibaba, Tencent and Huawei were among the most active in open-sourcing projects, contributing more than 2,000 projects to GitHub. Major tech companies such as Xiaomi, Bytedance and JD.com have also contributed a multitude of projects to open-source platforms. Chinese contributions to GitHub have gained in popularity – 26 Chinese projects are listed in GitHub's Top 500.

Several tech giants have open-sourced deep-learning frameworks. These are crucial for developing AI applications since they provide developers with the tools to rapidly adopt and implement deep learning at scale. Globally, the most widely used frameworks are Google’s TensorFlow and Facebook’s PyTorch. In a bid to create competitive Chinese alternatives, Baidu in 2016 released China’s first open-source deep-learning platform PaddlePaddle. Several more have since emerged. 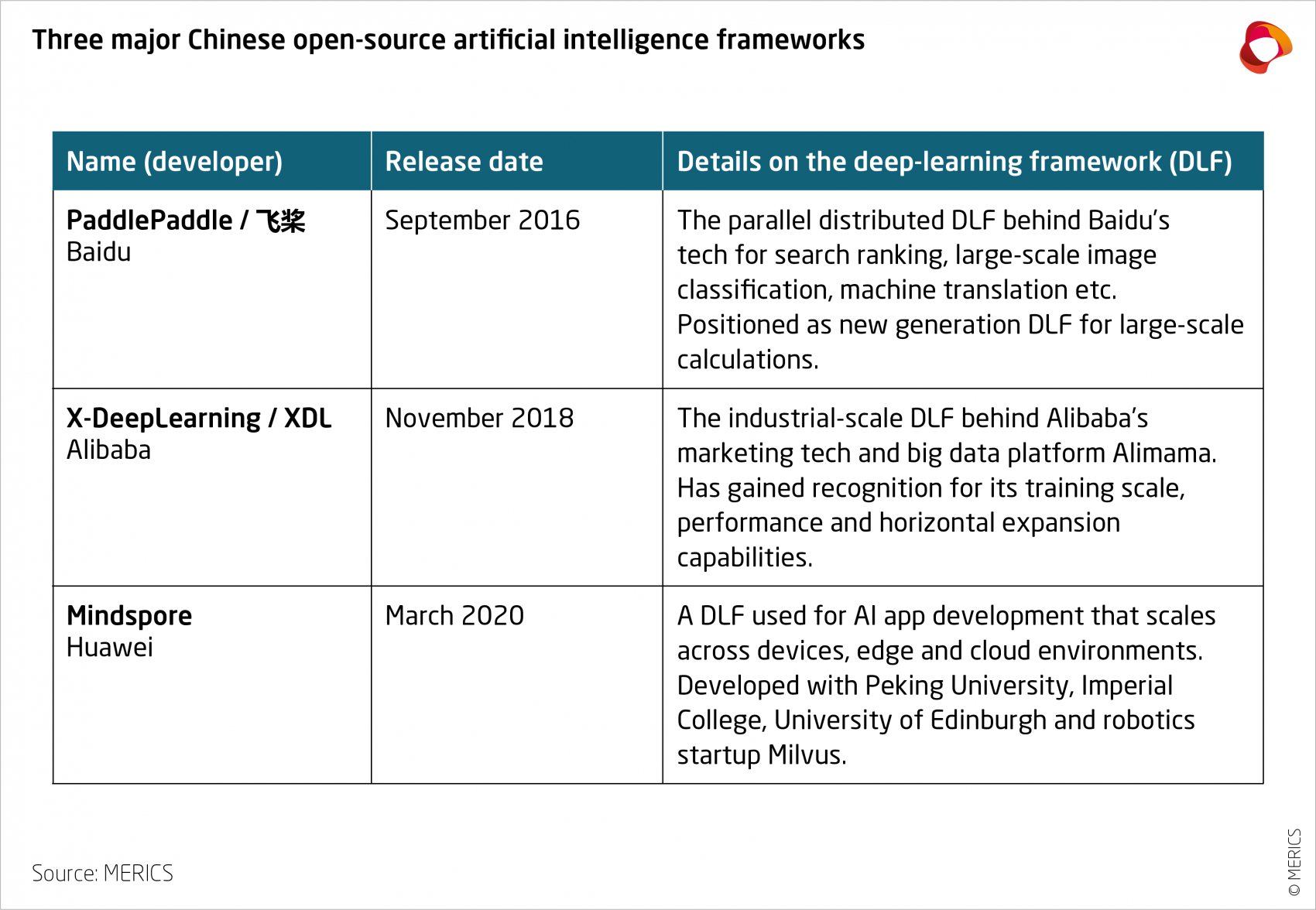 These frameworks have gained popularity in recent years. PaddlePaddle, which is used by more than 1.9 million developers and 84,000 companies around the world, enables the creation of specialized industrial AI applications. XDL has been praised for allowing users to easily extend systems built using other open-source frameworks to large-scale high-dimensional sparse data scenarios.

However, Chinese open-source AI frameworks cannot fully replace US-led ones yet. According to a comparison of GitHub repositories, PaddlePaddle trails TensorFlow by a factor of eight, and its use is declining. To become developers’ top pick at home or abroad, Chinese platforms will have to grow their communities by attracting popular open-source projects and increasing the number of contributors.

In more specialized, nascent areas, Chinese companies have better chances to lead. For example, Baidu has had considerable success with Apollo. Dubbed the “Android of the autonomous driving system,” this open-source platform provides data and code that allows partners to bring to market autonomous driving products. Chinese automotive and tech companies as well as European carmakers like BMW and Volkswagen have joined the platform.

These commercial projects and startups have received investments from Chinese venture capital firms such as Fosun Group, Future Capital and Sequoia China. They are also increasingly gaining the attention of foreign investors. PingCAP secured investments from Bertelsmann Asia Investment Fund and Matrix Partners. Chinese tech giants are also investing in open-source startups. Huawei and Baidu are strategic investors in Gitee, while Tencent has invested in Chinese code-hosting platform Coding.

Open source has moved into the political spotlight amid the US-China tech conflict as China remains heavily reliant on key US software - whether it's proprietary, licensed software such as crucial chip architecture sets by Intel and Google's Android operating system, or open-sourced tools that are freely available such as programming languages like Python and deep-learning frameworks. Open source is crucial to ensuring access to a lot of this foreign software and is therefore receiving government support.

The quest for technological self-reliance

US-China tech decoupling has added urgency to the government’s embrace of open source. Although open-source soft- and hardware, with the exception of encryption and decryption code, appear to be largely spared from US export controls, making open-source communities a bridge between Chinese developers and foreign technologies, future US actions might restrict some of these exchanges. Students at Chinese universities blacklisted for their military ties lost access to MATLAB in June 2020. Beijing is preparing for the worst-case scenario by investing in the domestic open-source ecosystem.

The government is also turning to open-source projects to boost self-sufficiency in hardware, especially semiconductors. Beijing’s support for the open-source chip project RISC-V aims to reduce reliance on expensive – and in the future potentially inaccessible – chip design architecture licensed by companies like Intel. RISC-V design architecture can be used free-of-charge to develop Chinese processors. Though RISC-V International – the nonprofit that freely publishes the documents defining RISC-V – is not subject to export controls, China preemptively established a China RISC-V Industry Consortium to promote domestic adoption of the architecture. The Shanghai government even offers subsidies for companies working with RISC-V.

Moreover, open-source technologies play a role in industrial digitalization, whereby resources are made freely available so that companies can integrate digital technologies, such as cloud and big data, for example through industrial APPs. The government wants to create an “open-source ecosystem for digital transformation,” where companies open their core technologies for use by traditional industries.

Beijing is strategically pushing to create a strong Chinese open-source ecosystem shielded from geopolitical actions. In June 2020, China established its first open-source software foundation, the OpenAtom Foundation. Notably, the foundation was announced after GitHub’s restriction of access for developers based in US-sanctioned Iran raised alarm in China’s tech industry.

Github has shown interest in establishing a subsidiary in China, the company’s second most important market. Yet, while the MIIT has welcomed this, the ministry is simultaneously betting on Gitee by handpicking it to construct an “independent, open-source hosting platform for China.”  Gitee may become a viable alternative if enough Chinese developers are willing to migrate to it.

In addition to supporting Gitee, the government is also backing several open-source alliances and organizations, which bring together government agencies, industry, research institutions, NGOs and individual developers. These alliances aim to perform the functions of dominant US-led communities, such as technical and operational support, governance and project incubation.

Open-source collaboration is especially central to China’s AI development strategy, which emphasizes the development of platforms where resources are openly shared. Achieving breakthroughs in AI open-source development is seen as essential to achieving China’s goal of global dominance in AI. The public-private platform OpenI is just one of the efforts underway and China’s 14th Five-Year Plan explicitly encourages the development of open-source algorithms in the context of AI innovation.

China’s open-source landscape is set for further expansion as the government continues its drive to reduce tech vulnerabilities and companies expand their global reach. But several obstacles stand in the way of Beijing reaching its goal of replacing foreign-owned tech with open-source options. Chinese platforms like Gitee and PaddlePaddle mostly still lag in popularity and operability. Meanwhile, developing alternatives to intricate and highly specialized technical software such as semiconductor design architecture takes considerable time and resources. Experts say it could take many years until RISC-V can truly compete with general purpose chip designs like Intel’s.

European actors must hone their understanding of Chinese advances in open-source development, especially as the EU pursues its own open-source software strategy. Technologies – or rather their underlying source codes – know no borders. This enables valuable exchanges in areas like basic AI research that benefit European innovation.

However, the borderlessness of open-source communities also carries significant challenges. When shared publicly, European developers’ source code can be freely accessed and used by individuals or governments in ways that go against European interests or values. Collaboration on open-source machine learning software, for example, could end up supporting Chinese military or surveillance projects. European decision-makers must be prepared to deal with these risks, while continuing to reap the benefits.