MERICS’ China Forecast 2021 shows that the European Union is under considerable pressure to match its talk about Beijing’s systemic rivalry with action, says Lucrezia Poggetti.

2021 began with new momentum in EU-China relations. Late December’s conclusion in principle of negotiations for a Comprehensive Agreement on Investment (CAI) looks poised to set the tone for many of the discussions ahead on European China policy and China’s approach to the EU. The results of MERICS’ annual forecasting exercise – which gauged the opinions of 170 European China experts and roughly 1,000 members of the wider international public – shed some light on what observers think EU-China relations will look like in 2021.

Internal priorities and a geopolitical landscape marked by continued Sino-American competition will affect Chinese and EU policies. In the year of the Chinese Communist Party’s (CCP) 100th anniversary, respondents say no doubts remain about Xi Jinping’s grip on power. After last year saw an intensified crackdown in Hong Kong and new revelations about re-education camps in Xinjiang, they also worry Taiwan might be the next flashpoint.

Respondents expect China in 2021 to focus mainly on fostering partnerships in Asia and on achieving post-coronavirus economic recovery and technological self-reliance. The country’s goal of scientific and technological self-sufficiency is expected to be at the center of its 14th Five-Year Plan. The Chinese leadership sees this goal as crucial to limiting any shocks to China’s long-term economic progress caused by increasing geopolitical risks, like supply chain disruptions created by the Covid-19 pandemic and strategic competition with the US.

The EU is expected to prioritize economic recovery after Covid-19, sustainability policies under the European Green Deal, and investment in digital transformation. Internationally, Joe Biden becoming US president might prove to be a game changer for Europe. Survey respondents think that 2021 will see a revival of transatlantic relations: 88% of China experts and 81% of the general public see the EU and its member states drawing closer to the US under a Biden administration. And in the second half of the year, all eyes will be on Berlin – Germans in September will elect Angela Merkel’s successor as Chancellor. Depending on the outcome, Germany is expected to continue on the current trajectory or to get tougher on China. Survey respondents in no way expect Berlin to soften its stance towards Beijing. 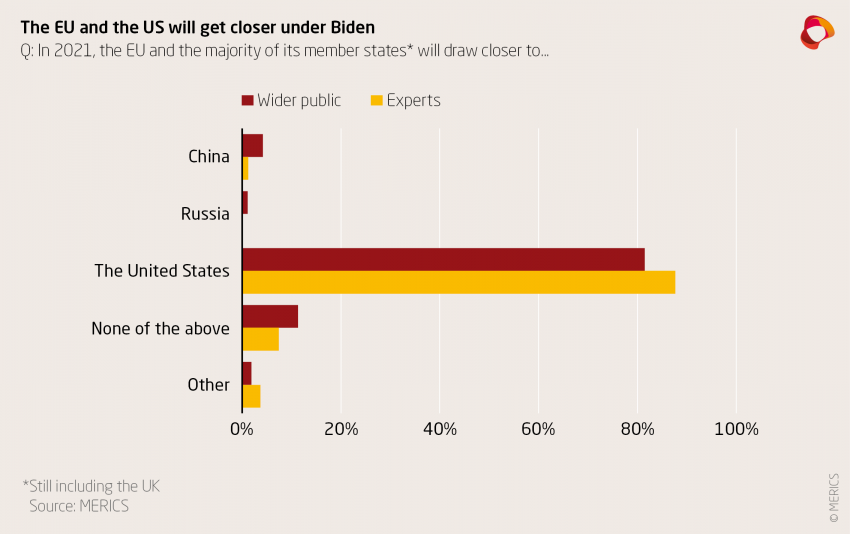 In bilateral relations, Brussels and Beijing are expected to negotiate the long-flagged China-EU 2025 Strategic Agenda for Cooperation. As for European China policy, the EU will review its 2019 strategic outlook to assess progress made and gaps that remain to be filled. Policymakers in Washington and around the world will be watching closely to see how the EU will in future manage to balance economic interests and systemic rivalry with China.

Partnership and rivalry – and still having it both ways

On December 30, the EU agreed in principle to conclude CAI talks with China and on January 6 called for the immediate release of 53 former pro-democracy Hong Kong lawmakers, arrested under the National Security Law. This chain of events suggests the EU in 2021 will try to continue keeping business and politics separate when dealing with Beijing.

Survey respondents certainly think that systemic rivalry and economic partnership will continue to coexist: 66% of the experts surveyed expect political relations to deteriorate (seven percentage points more than last year), but 50% of them also think that economic ties are going to remain stable. Respondents from the general public largely share these views. 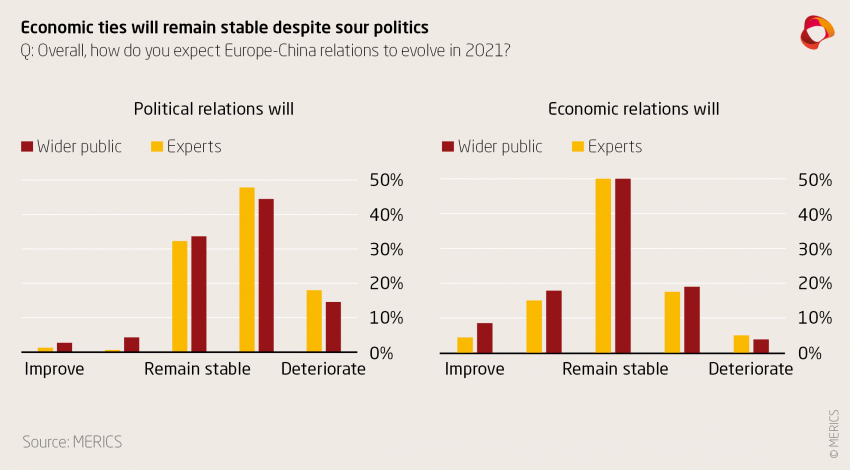 Despite the overall trust in solid business exchanges, the survey results also indicate a lack of clarity about the overall trajectory of EU-China economic relations. Of the experts who do not think economic relations will maintain their current trajectory, roughly half expect business ties to improve and half that they will get worse. As the escalating trade row between China and Australia shows, systemic rivalry can hurt economic cooperation.

Indeed, Beijing’s coercive diplomacy is ranked as the number one issue that might burden EU-China relations in 2021. The Chinese government has already signalled that it does not plan to back away from “wolf warrior”-style diplomacy. In an interview to party-state media on January 2, Chinese Foreign Minister Wang Yi mapped out the country’s diplomatic priorities for the year and warned: “We accord friends with hospitality and partners with cooperation. But we also have to stand our ground when dealing with those who are not so friendly.”

What does this continued partner-rival dualism mean for cooperation? EU and Chinese government officials often cite global challenges – and particularly the Covid-19 pandemic and environmental issues – as fields in which Sino-European collaboration remains possible. These policy areas are key priorities as governments around the world continue to fight the coronavirus pandemic and prepare to meet twice at United Nations conferences in 2021 – first in Kunming and then in Glasgow – to discuss biodiversity and climate change.

Survey respondents are pessimistic about international cooperation in public health. No experts or members of the public surveyed see joint vaccine research and distribution as an area in which the EU and China can achieve a breakthrough. But survey respondents do hold some hope for climate policy, which has surpassed the EU-China investment deal as an area that could bring tangible results. About 30% of expert and general-public respondents think that Brussels and Beijing can work together to move towards the Paris climate goals.

The EU’s new tools – and putting them to use

While the EU is expected to continue treating China simultaneously as a partner and a rival, the bloc’s new tools to deal with Beijing’s multifaceted challenge could make a key difference in 2021. Last year, several European policy proposals at last began to be implemented – the EU investment-screening mechanism, for example, became fully operational in October and the global human rights sanctions regulation was approved by member states in December.

More proposals with implications for EU-China relations are in the pipeline in Brussels. For example, the EU is expected to propose new tools to address market distortions caused by foreign subsidies, an anti-coercion mechanism as a new instrument in its trade arsenal, and levies on CO2-intensive imports into Europe’s single market.

As the EU strives for a more sophisticated approach to China, the key will be to put these tools to use. The CAI gave a boost to the economic partnership between the EU and China. But survey respondents want the EU – which has committed to dealing with China’s systemic rivalry and promote liberal values – to do more than that and become a geopolitical player.

Asked about the importance of specific moves, survey respondents said the EU’s top priorities should be sanctions in response to Beijing’s human rights violations in Hong Kong and Xinjiang and the diversification of supply chains to reduce exposure to China. The EU might consider making sure such steps are taken in parallel to any towards more cooperation. 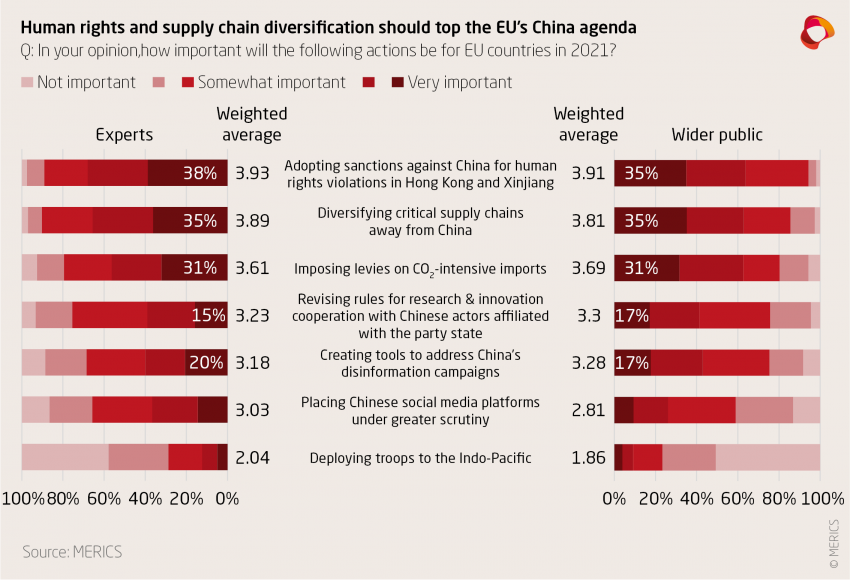