“With a little help from my friends”: China turns to Africa to bolster food security

There are growing calls for Beijing to help tackle the world food crisis, but China has its own food security concerns. It sees a solution in boosting imports from Africa, but this is not without obstacles, say Aya Adachi and Francesca Ghiretti.

Global food prices have spiked. The war in Ukraine, Covid-19-related disruptions, extreme climate events in major food-producing countries, and rising energy and fertilizer prices are among the factors responsible. Export restrictions brought in by top food-producing states including Russia have further exacerbated the situation. Countries in Africa and the Middle East are already facing serious food shortages, and there is no short-term solution in sight.

Thanks to China’s significant reserves and high domestic production levels, the conflict in Ukraine has posed no immediate threat to the country’s food security. China is the holder of the world’s largest grain reserves, thought to contain roughly 69 percent of total global corn reserves, 60 percent of rice, and 51 percent of wheat. It also has a longstanding target of 95 percent self-sufficiency in key grains achieved through a mix of protectionism and stabilizing measures. Beijing therefore seems well placed to intervene to alleviate the crisis, and there are increasing calls for it to do so. 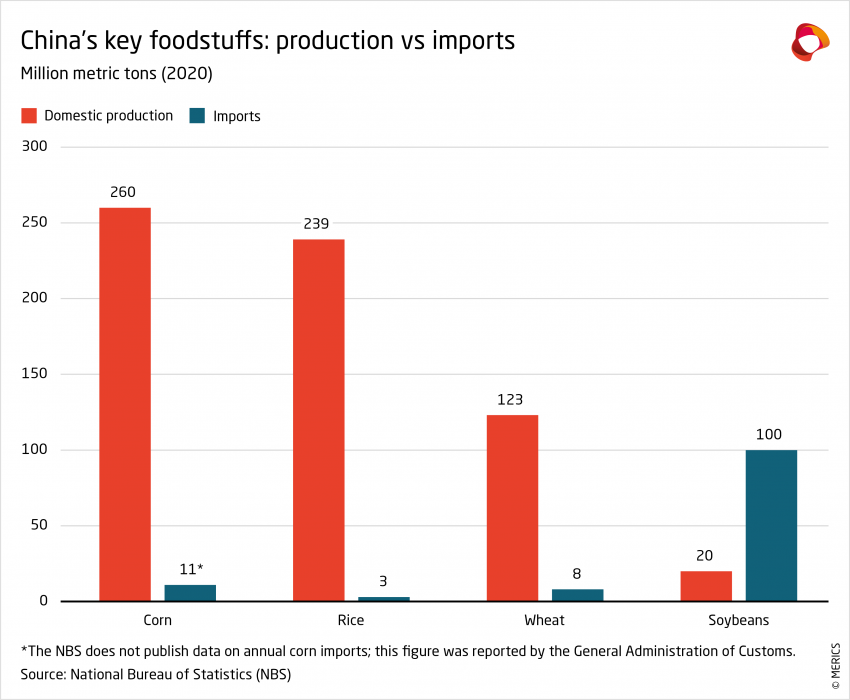 China’s options in the face of a global food crisis

But China will likely be cautious about using its reserves to stabilize world food prices. With the Great Famine of 1959-1961 within living memory, food security remains a sensitive issue in the country. The Chinese Communist Party (CCP) cannot afford a possible public backlash, particularly given the levels of frustration over China’s extensive Covid-19 lockdowns and related issues with food distribution in spite of a food security guarantee.

This is not Beijing’s only option, however. A temporary drop in Chinese agricultural product imports could also help mitigate rising global food prices. China was already implicated in pushing up global prices prior to the Russia-Ukraine war, and if its grain imports maintain the trajectory of the past decade, global commodity prices could rise even further. This could tarnish Beijing’s reputation in developing countries as a generous contributor to South-South cooperation. A low-key import reduction approach would both help avoid exacerbating the situation and sidestep risks to domestic legitimacy but could also have food security implications for China.

A third option to help tackle rising food prices in the developing world would be the expansion of China’s donations to the World Food Programme (WFP) and other food aid schemes. To date, Beijing has only donated USD 3 million to the WFP. It has, however, pledged an additional USD 50 million to the China-FAO South-South Cooperation Trust Fund, along with food-related capacity-building measures under its new Global Development Initiative Framework. While bearing a financial cost, these measures would leave China’s own food security unaffected.

This is not unimportant. In spite of its impressive food reserves, China is facing impending domestic risks to its food security. Soil exhaustion, pollution, and rising problems with fresh water resources mean that China’s total arable land had fallen to 1.28 million square kilometers by the end of 2019, down nearly 6 percent from 2009. Meanwhile, the Chinese Academy of Social Sciences (CASS) has estimated that urbanization and an ageing rural workforce could bring a grain supply gap of about 130 million metric tons by the end of 2025. Against this backdrop, Beijing could well decide to continue expanding imports and reserves in order to guarantee China’s own future food security, even at the expense of global food supplies and prices at a time of crisis.

But not all import schemes are created equal. China is now turning to African countries for help meeting its growing food needs, offering debt alleviation and agricultural investment in return. This arrangement could be of mutual benefit but is not without obstacles.

The African continent’s longstanding struggle with food insecurity, worsened by political instability, the spillover of the pandemic, and the effects of climate change, led to it being particularly badly hit by the current global food crisis. According to the UN, over 20 percent of the African population faced hunger in 2021, while around a quarter of the continent’s population are estimated to be experiencing “severe” food insecurity.

The rise in global inflation driven by the war has also added pressure on African countries’ debt burdens, leading many to explore refinancing or debt restructuring with international lenders – first and foremost China. In response, China has pledged to forgive 23 loans to 17 African countries. A further debt alleviation proposal centers on increasing food imports from Africa to help meet China’s growing food needs. In the past fifteen years, the value of China’s food imports has increased almost tenfold, soaring from USD 21 billion in 2006 to 209 billion in 2021. Imports from Africa have kept track with this trend, with China accounting for 4.7 percent of the continent’s agricultural exports.

However, compared with food imports from sources such as Brazil or the United States, Africa has only been able to claim a small slice of the pie: around 2.7 percent in 2019. The reasons for this are manifold, but if we set aside the obstacles posed by “made in Africa”, the primary hurdles are cumbersome import approval procedures and a reluctance to open up the Chinese market to African products.

At the latest China-Africa summit, China expressed interest in boosting imports from Africa. In 2021, Xi Jinping proposed the creation of China-Africa “green lanes” to speed up the importation of African agricultural products. And it seems China’s regions are leading the effort. Hunan, Zhejiang, and Guangdong, for instance, have passed bills to create an Africa-focused free-trade zone (FTZ), build a railway-sea transport link between Hunan and Guangdong, and develop connections to major African airports and ports.

It is no secret that Africa has the potential to be a fitting partner for a China looking to cover its growing food needs. Increased African exports to China could also lighten the continent’s debt burden, if only minimally, while Chinese agricultural investment could help address one of the root causes of Africa’s longstanding food insecurity. However, it is well known that Chinese investments with “no strings attached” also carry the potential to exacerbate problems such as poor policy making and corruption. China has pledged to improve the quality of its investments abroad. Perhaps the new Global Development Initiative will be a means to do so.

This article is a summary of an input paper prepared for a workshop of the ECFR-MERICS European Caucus on China.