Propaganda beyond the Great Firewall

Although Facebook, Twitter and YouTube are blocked in China, Chinese party-state media have built very active presences on these platforms. Lately, Chinese ambassadors around the world have been opening Twitter accounts to feed their government’s positions into global debates on China. Even though the propaganda may seem crude and inefficient at first sight, its long-term effects should not be underestimated. 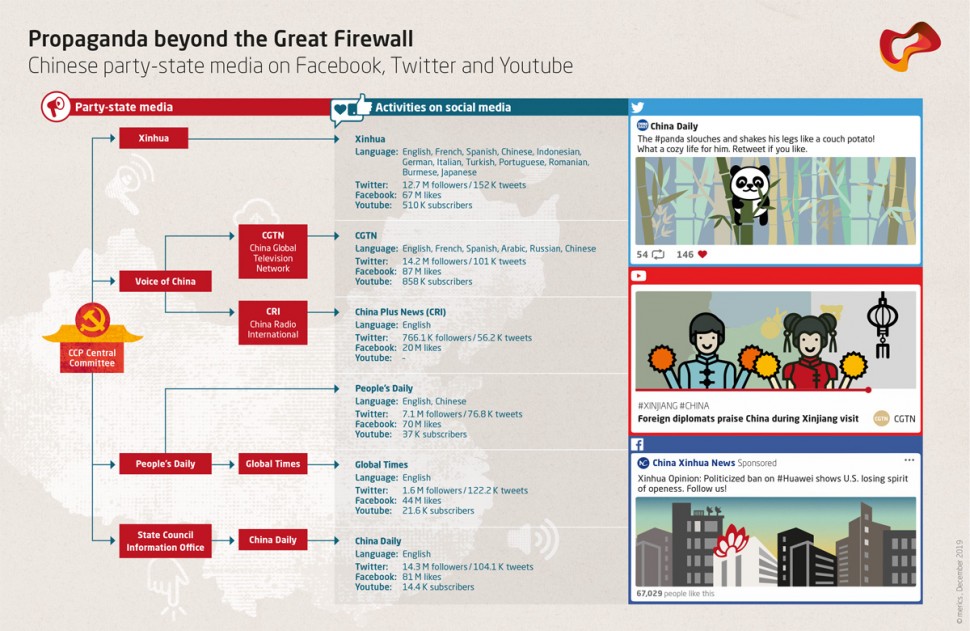 The Chinese ambassadors to the United Kingdom, the United States, Austria and South Africa have all started using their new Twitter accounts this year. It is just the latest manifestation of a long-term project. Chinese party-state media have been actively using Western social media platforms since 2009, the year the Chinese Communist Party (CCP) announced a major investment to boost the global presence of its media. The CCP’s aim was, and remains, to change global debates about China - and any other topic the Party cares about – to bring them closer in line with its own position. Its intention is to gradually change the conversation and increase the Party’s “discourse power” (话语权).

The reach of Chinese party state media on Western social media has expanded significantly since 2009. The first accounts were focused on English and Chinese language content - and these remain the principal languages used today. But since 2015 CCP media have been pursuing a strategy of media localization (媒体本土化), offering content in more languages and targeted at specific countries. Xinhua started a German language Twitter account, @XHdeutsch, as well as its country-specific Romanian and Italian Twitter channels (@XinhuaItalia and @XHRomania) in 2015. In the same year, Xinhua and the China Daily newspaper started using automatic geolocation to redirect the user to a specific language version of their page on Facebook.

Today, all major Chinese media targeted at foreign audiences around the world, as well as at overseas Chinese, have one or multiple presences on Facebook, Twitter, and YouTube. Though people often speak of “state media”, Chinese media are all under the control of the party (see the infographic for affiliations of central media).

The content posted and promoted by party-state media on Western channels varies from fluff to polemical attacks, but most is subtle and aimed at building Chinese media's brands.

Much of the content consists of regular news stories that are similar to those reported by western news outlets, although it differs from these in that there is more “positive news” and “success stories” about China, such as development achievements in minority areas like Tibet and Xinjiang. On Twitter, the #Tibet and #Xinjiang hashtags are filled with images of animals and landscapes by party-state media. Attractive visuals and curious content or human-interest stories are used by most CCP media to draw in users, featuring cuddly pandas, other baby animals, impressive landscapes, and China’s technological achievements.

Mixed into this is content that is overtly political, such as posts promoting the Chinese political system or justifying directly China’s repressive policies in its minority areas. For instance, Chinese party-state media have highlighted supposed praise by foreign diplomats for the CCP’s policies in Xinjiang, where an estimated one million people have been interned in camps and many more are affected by the Party’s repressive policies. Some of the tweets posted by Chinese party-state media have been highly misleading, such as presenting protests in Hong Kong against the government as pro-government protests. In other cases, Xinhua used its Facebook account to dehumanize Hong Kong protesters by depicting them as cockroaches.

Some editors of party-state media are also quite active on platforms such as Twitter, like Hu Xijin, editor-in-chief of the English-language newspaper Global Times, who has over 100,000 followers, and the China Daily’s Europe bureau chief Chen Weihua. They frequently weigh in on hot topics like the Hong Kong protests, Huawei, the West’s supposed lack of freedom of speech, and “Western hypocrisy” towards China.

How successful these are is hard to gauge. The high number of followers suggest (though do not prove) that Chinese party-state media may have artificially inflated their followers and likes: On Facebook, China’s international news channel CGTN has 87 million likes, Xinhua has 67 million, and the People’s Daily has 70 million. By contrast, CNN “only” has 31 million and the BBC has 49 million. On Twitter, the English language version of Xinhua’s principal news account @XHNews has 12 million followers, and the People’s Daily has over 5.5 million.

Up until recently, the Chinese party-state has been able to exploit the asymmetry in the information environment created by China’s internet censorship machine, colloquially known as the Great Firewall. Just a month after it started using social media platforms in the West in 2009, Facebook, Twitter and YouTube were blocked in China. Now, however, there appears to be a pushback. All the major CCP media had been making heavy use of the option to pay for promoted content, but very recently Twitter has stopped accepting paid content from party media as part of tightened rules on political and state-sponsored content. And responding to the larger debate in Western countries about “fake news” and political manipulation, Facebook has introduced an Ad Library to improve transparency around political advertising. This Ad Archive provides basic information on ads that are no longer active, such as how much was paid for the post and who the target audience was. Twitter also has an Ad Transparency platform, but only offers limited information on ads run over the past seven days.

Nevertheless, Chinese paid online commentators seem to have increased their activity on social media: In August, Twitter and Facebook announced that they had taken down accounts that had engaged in disinformation on the protests in Hong Kong. The same day, Twitter also announced that it would no longer allow most state media to promote tweets.

It is not possible to get a complete picture of who the ads were targeted at. Some information is available on Facebook, where ads are still permitted, but is not provided for ads that are still active. From the limited information we have, most of the discontinued ads on Facebook were targeted at the Global South. In these cases, CCP media appeared to be using displays of European support for China and its policies as a legitimizing force. For example, CGTN promoted an article on Angela Merkel stating that she wanted to strengthen multilateralism with China, and an article on an Asia-Europe meeting to promote the message that Europe recognizes China as a reliable partner. However, it is not just the Global South that has been targeted in this way. One ad targeted at the Balkans used the “success story” of Chinese investment in Africa rather than speaking about Chinese investment in the region directly.

While China experts may find much of this propaganda crude, it is clear that these people are not the target audience. As Liz Carter, a former translator at China Digital Times, said recently: "The point is not to convince everyone, but to convince enough people to win a public opinion war and drown out voices of reason. This is an often-overlooked aspect of CCP strategy, because those who know enough to care about it are the least likely to be affected by it, and the most likely to underestimate its harmful impact."

Success of China’s strategy is difficult to assess

Looking at only the official accounts gives limited information on the resources the Chinese party-state can draw on to promote its messages through Western social media. Party-state media’s accounts on Western social media are just one part of the CCP’s attempts to gain more influence over global public opinion, and they are part of a long-term initiative to change how people globally talk about China.

It is difficult to draw conclusions about the success, or otherwise, of these media in influencing public opinion outside China. However, it is clear that they add to the overall asymmetry in the information environment, where Chinese media can spread their messages while western media are cut off from access to Chinese audiences. In order to ensure that this access is not used to systematically spread misleading news, a higher degree of transparency and more systematic investigation into communication patterns of the party-state’s media are required.