Relations between Beijing and China’s tech giants have been complex and in flux for many years. But just recently the government has taken a much clearer approach, introducing a swathe of measures designed to bring these companies in line with its goals and keep them on their toes. MERICS analysts Kai von Carnap and Valarie Tan analyze the latest developments.

When Jack Ma told China’s financial elites on October 24, 2020 that their incompetence had created a severely underdeveloped financial system and insinuated that his fintech may be the cure, his words marked the moment when Beijing shifted its relations to big tech giants from toleration to confrontation.

Ma was perhaps unaware that the same day saw the launch of “Operation Cyber Sword” (网剑行动), a wide-ranging campaign involving 14 ministries and agencies aimed at reigning in China’s tech sector. The regulatory actors were given six tasks: regulating live-commerce platforms, cracking down on unfair competition in online markets, strengthening the supervision of Internet advertising, centralizing control of online sales, and ending illegal animal and plant trade on e-commerce platforms. 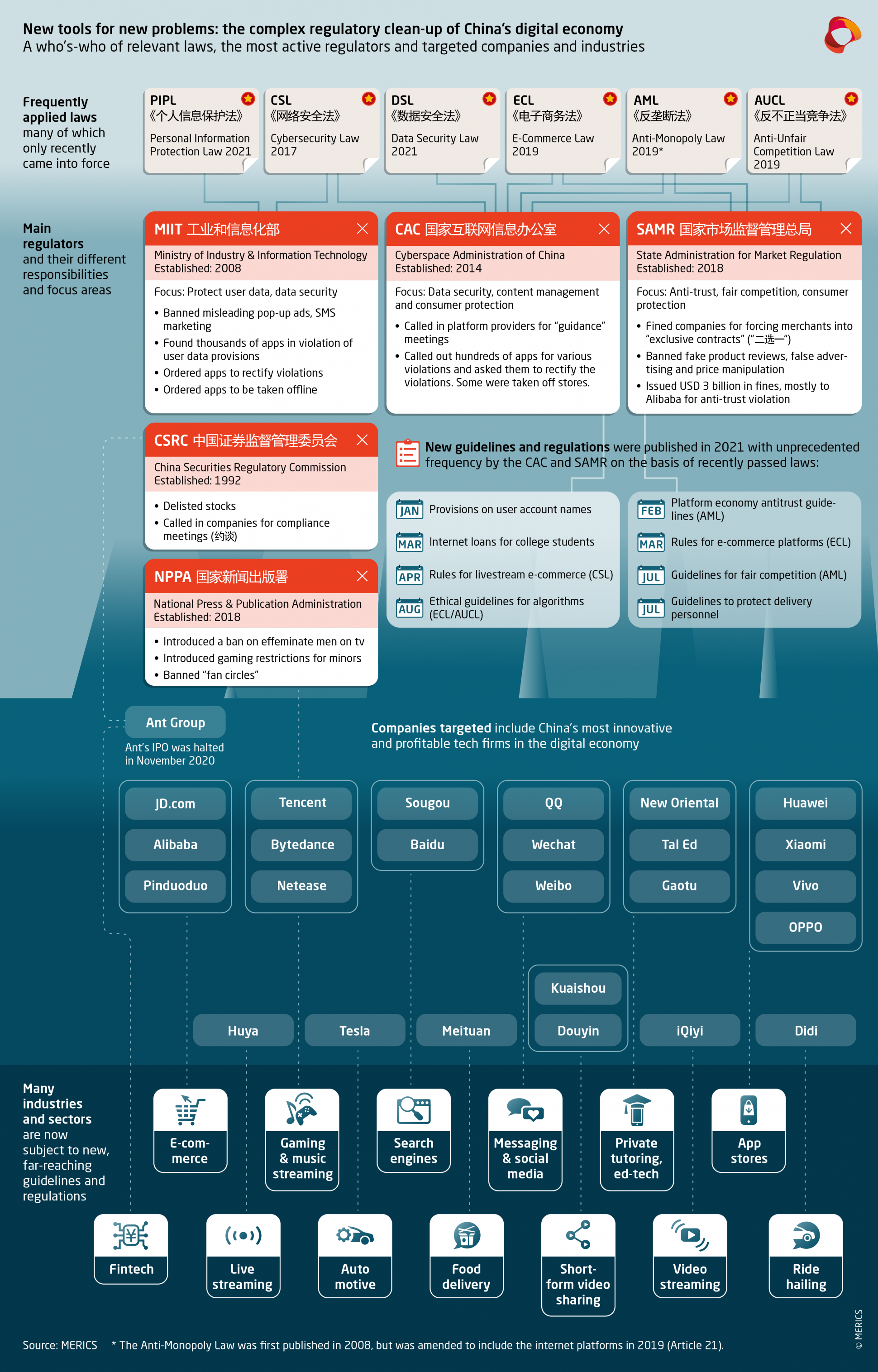 What has followed over the ensuing 12 months is an unprecendented and ongoing regulatory onslaught. Hundreds of companies have been fined north of USD 3 billion, apps have been taken off stores, and Jack Ma – until then China’s richest man – inexplicably went missing for three months.

China’s Cyber Sword is being wielded not just at individual companies or apps but at entire industries and ecosystems. A whole range of antitrust guidelines and rules have been introduced that e-commerce platforms, social media providers and live-streaming services have to abide by.

Enforcers are pushed to use and test the new regulatory power

One of the biggest effects so far has been to create uncertainty. For businesses, especially foreign ones, it is hard to predict where the next regulatory wave will come from as the whole campaign appears to lack a systematic approach. However, the ministries and agencies issuing these regulations, even if they target only tech-adjacent industries such as digital education, are in fact coming together under one flag.

Disentangling the web of regulations reveals a consolidation of institutional power and the progressive implementation of a broad legal framework. The overall shape of the campaign is only slowly becoming clear because the most significant laws just came into effect over the last two years. What is happening now is that the enforcers are being pushed to use and test these new powers.

All this is happening against the backdrop of a digital economy that has celebrated immense growth over the past decade. New business models developed rapidly and labor markets and financial dynamics underwent paradigmic shifts. However, with these changes came a host of “regulatory problems”, which the government is keen to tackle using different new bodies applying a number of new laws.

The State Administration for Market Regulation (SAMR), for example, was only found in 2018 and tackles market regulation. It enforces the Anti-Unfair Competition Law that has been in effect since 2019. The SAMR has succesfully investigated more than 3,000 cases of unfair competition and collected CNY 206 million in fines in the first half of 2021. It has also made use of the new E-Commerce Law, effective since 2019, and the Anti-Monopoly Law. Meanwhile, China’s new cyber watchdog, Cyberspace Administration of China (CAC), has focused on implementing the 2017 Cyber Security Law and the 2021 Data Security Law. It found more than 100 apps in violation of collecting users’ personal information and ordered Didi, China’s biggest ride-hailing app, to be taken offline. 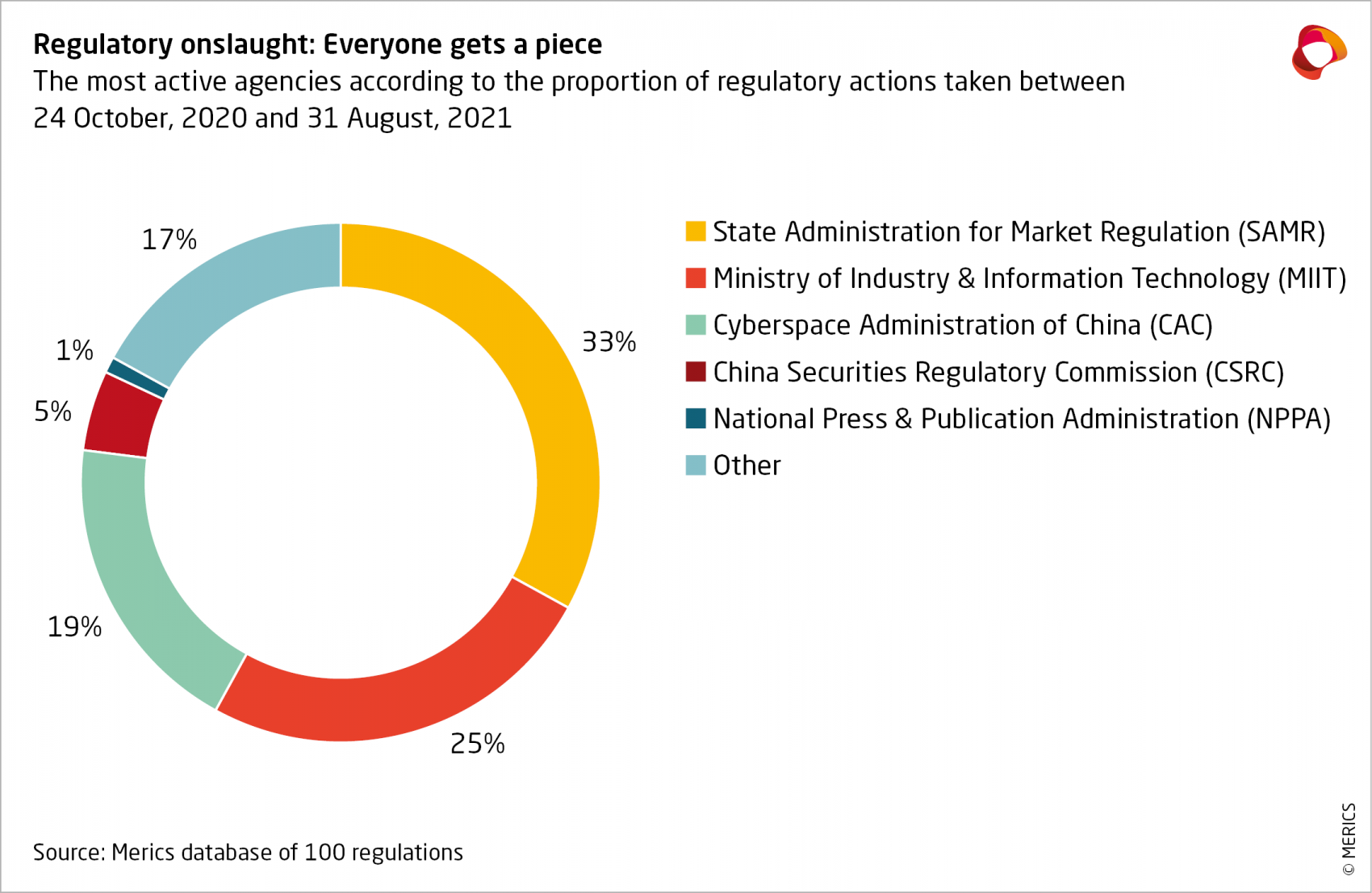 Business bends to government will

First results of this campaign indicate that at least parts of China’s digital economy are fundamentally changing. It is reported that 80 percent of misleading advertisements to third party webpages have been taken down. As a result, apps and websites that depend on this source of revenue are having to reconfigure their business models. Employees in ad sales are being laid off along with those in gaming and private tutoring, the other two sectors hardest hit by the regulations.

Further adjustments lay ahead, not least because of the planned three year clean-up program for algorithms. While the line between private companies, the state and SOEs become increasingly blurred, the new laws and regulations still have to be fully implemented. Laws issued this year, such as the Personal Information Protection Law, have not yet played a big role.

Indeed, these institutional changes are just one part of a grander paradigm shift in China towards technological self-suffiency, a closely steered government economy and China’s ambition to become a technology superpower. Ultimately, the question of how Beijing wants to define the role of its private sector at large in this “new phase” of socialism has still to be answered.