China’s Internet industry is rapidly changing and entrepreneurs adapting to new domestic and global realities. China leads the world in the number of unicorn startups, many of which are in e-commerce and other Internet-based businesses. New e-commerce platforms are emerging alongside established players, such as Pinduoduo, the group buying platform that trails only Alibaba in number of users and has become one of China’s five most valuable Internet companies. Jinri Toutiao, Douyin and TikTok owner Bytedance recently revised its revenue target for 2019 to 120 billion RMB, from an earlier goal set late last year of 100 billion. At the same time, the U.S.-China tech war is putting relations between China and Silicon Valley under strain, while at home economic growth is slowing and venture capital plummeting. Against this backdrop, Rui Ma shared her insights about the fast-changing ecosystem of China’s Internet, the companies to watch and the impact of global tech tensions on business with MERICS experts Kristin Shi-Kupfer and Rebecca Arcesati.

Rui Ma is an angel investor and entrepreneur, as well as a leading expert and commentator on Chinese tech. She co-hosts Techbuzz China, a weekly podcast powered by Pandaily and covering the hottest news in China’s innovation. Rui is a Venture Partner at 10H Capital, Executive Chairman at Rookie Fund, Mentor and Venture Partner at Asia-based AI and Machine Learning accelerator Zeroth.ai, and Co-Founder of the Transformative Technology Academy, a program that supports global transformative technology startup founders. Until 2016, Rui was the Greater China Investment Partner at 500 Startups, a Silicon Valley headquartered hybrid startup accelerator and investment fund, where she found and funded internet entrepreneurs from mainland China, Hong Kong and Taiwan. Previously, she worked in private equity and investment banking in Beijing, Shanghai and Silicon Valley for a decade. Rui was educated at the University of California at Berkeley (B.S. in Electrical Engineering and Computer Science), INSEAD and Tsinghua University (EMBA), and the University of Illinois (M.Ed.).

Listen to a recording of the event in the MERICS experts podcast:

Presenting the latest MERICS Paper on China: The CCP's next century 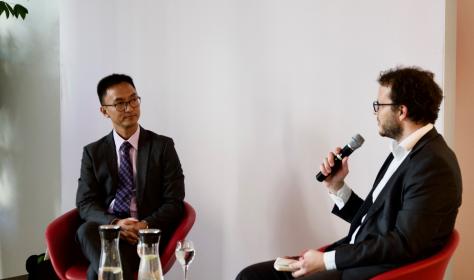 The US-Chinese trade conflict and Asian economies: risk or opportunity?

China’s Social Credit System in 2021: From fragmentation towards integration