The United States and China took steps in the first days of June to extend the legal foundations of what is now an ever more formalized relationship of mutual mistrust. On June 3, US President Joe Biden signed an executive order that bars US investors from putting their money into stocks and bonds of 59 Chinese companies linked to the PRC’s “military-industrial complex” and its surveillance technology sector. The ban, effective on August 2, replaces and strengthens the Trump administration’s measures aimed at preventing US investments from supporting Chinese companies that undermine US security and values.

In addition to targeting a longer list of firms, many of which are subsidiaries of state-owned defense companies, the investment ban identifies the use of surveillance tech for domestic repression and human rights abuses in China as posing a threat to the United States. The E.O. also clarifies that the US Treasury, not the Department of Defense, will drive future designations.

These are only the latest in a long series of trade and investment restrictions targeting Chinese firms and technology as the strategic rivalry between the two countries continues to intensify. The US Senate further passed legislation on Tuesday to provide more than USD 250 billion in support for the US tech industry to counter China’s ascendency in a number of key technology fields. China’s Foreign Ministry said the bill, known as the Innovation and Competition Act, displayed a Cold War mentality.

US blacklists of more Chinese firms come on top of political sanctions imposed on China over its crackdown on human rights and democracy in Xinjiang and Hong Kong. The US, the EU, Britain and Canada sanctioned Chinese officials over Xinjiang abuses in March, to which Beijing responded with broad countersanctions.

In light of these actions, Beijing is expanding its own retaliatory toolkit against sanctions and other acts it regards as discriminatory or otherwise unjustified treatment (see table below).

On June 10, the National People’s Congress Standing Committee enacted China’s first “Anti-Foreign Sanctions Law,” which was first proposed in March. Chinese legal experts say it will finally start levelling the playing field and give Beijing the kind of legal powers that Washington and Brussels already have at their disposal. State-owned media outlet Global Times framed the new law as a response to Washington’s “aggression” in an article about the US competition bill.

MERICS analysis: “Beefing up the legal instruments for countering foreign sanctions and extra-territorial effects of other countries’ jurisdiction is a priority of China’s legislative work this year. China’s regime to impose and counter sanctions is still much less expansive compared to those of the US and the EU. Chinese state media also highlighted the move from administrative decisions to a more formalized framework as a boost for the legitimacy of China’s actions. Companies doing business with China must be prepared to face a growing number of pitfalls there and in the US, as they may be caught in the crossfire between conflicting sanctions regimes and blacklists.” Rebecca Arcesati, Analyst MERICS 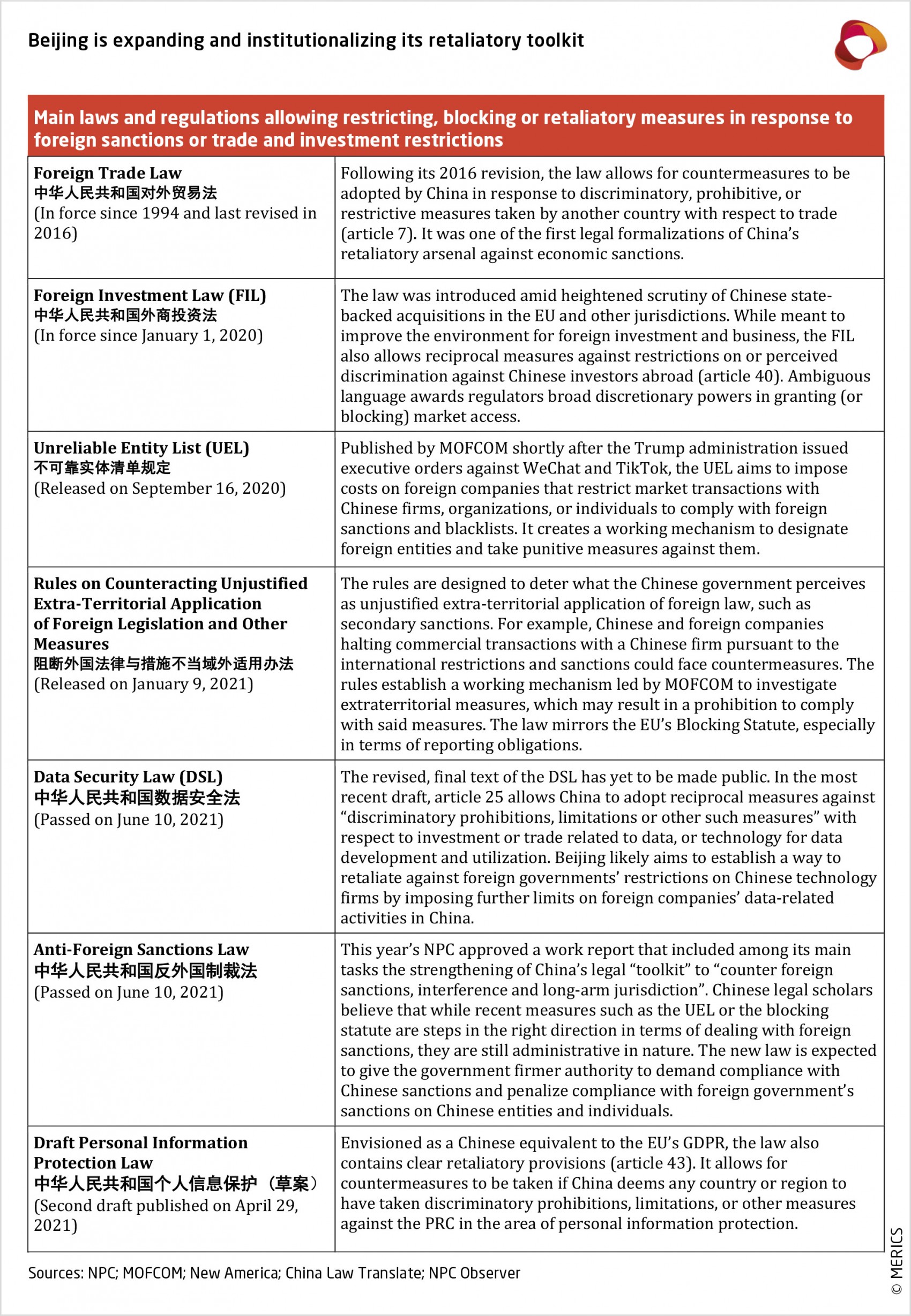