The crisis in the Taiwan Strait: the European front

Pelosi’s visit and the subsequent crisis in the Taiwan Strait has caused a ripple effect that has reached European shores. Milder yet clear warnings from Beijing’s representatives in European capitals ring in the ears of European actors who have been dealing with their own internal battle about what and what not to do about Taiwan.

Europeans were hardly the source of Beijing’s ire in the days that followed Pelosi’s Taipei visit. Yet, the crisis presented an unmissable opportunity to send a clear signal about Beijing’s (changing) red lines regarding engagement with the island.  Messages that have become all the more necessary following France, Germany, Italy and the UK’s decision to sign a G7 statement affirming their “commitment to maintaining peace and stability across the Taiwan Strait”.

The signals from Beijing

Unsurprisingly, the PRC ambassador to France, Lu Shaye, has been among the fiercest and most controversial commenters by publicly claiming in two interviews for French TV that the PRC will “reeducate” the Taiwanese upon “reunification” of the island. The ambassador to the UK, Zheng Zeguang, urged the UK not to follow in the footsteps of the US and condemned their signing of the G7 statement. He rejected “concerns” expressed by London when summoned by Foreign Minister Liz Truss to explain the PRC’s actions in the Strait.

If there were a prize for the best comment, however, it would go to Wang Wenbin, PRC Foreign Minister Spokesperson, who made a meagre attempt to draw parallels between Taiwan and Scotland. Citing the G7 statement itself, the ambassador claimed that London too would not remain “calm, exercise restraint, act with transparency” if Scotland attempted to obtain independence. Well, as many observers pointed out, unless Beijing is ready to permit an independence referendum in Taiwan, the comparison falls flat.

Messages prior to the crisis in the Strait also reinforced the signal that Beijing is becoming much less tolerant when it comes to interactions with Taiwan.

Europe is also feeling the impact of an emerging new status quo. Exchanges at parliamentary level have traditionally carried much of the relationship between European countries and Taiwan. In early July, Wu Hongbo, the special envoy on European affairs, said that any action taken by European lawmakers would be considered as official EU policy by Beijing.

While that may be the case for EU lawmakers, Beijing however is unlikely to impose repercussions on the whole of the EU for actions undertaken by member states. Take the case of Lithuania. Beijing insists Lithuania’s engagement with Taiwan is not a whole of EU affair to mitigate an EU response to China’s economic coercion against the country. More likely, however, is that Beijing will whittle away at the informal ties that EU member states have with Taiwan by making it as uncomfortable as possible for them to strike a balance between formal ties with the PRC and informal ties with Taiwan. For example, following the visit by the Lithuanian Deputy Transport and Communications Minister Agnė Vaiciukevičiūtė to Taiwan, rather than retaliating against the EU bloc, Beijing pinpointed their sanctions at her and chose to suspend engagement with her ministry.

While European G7 countries may have signed an official statement, it is in fact member states from Central and Eastern Europe (CEE) who remain the frontrunners in European bilateral engagement with Taiwan. Lithuania, Czechia and Slovakia have been strengthening their relationship with Taiwan and their parliamentary delegations have the highest number of visits to Taiwan among Europeans, including less high-level visits which are not included in the graphic below. Warnings from Beijing seem to have had little effect, on the contrary, it has reaffirmed their conviction. For example, in December 2021, after China exercised economic coercion against Lithuania, Slovakia and Taiwan inaugurated a Taiwanese-Slovak Commission on Economic Cooperation. At the end of July, both Czechia and France hosted the visit of Taiwan's Legislative Speaker You Si-kun. The Lithuanian government still plans to open a trade representative office in Taiwan in September. And Lithuania’s Foreign Minister may be planning a visit to Taipei later this year. 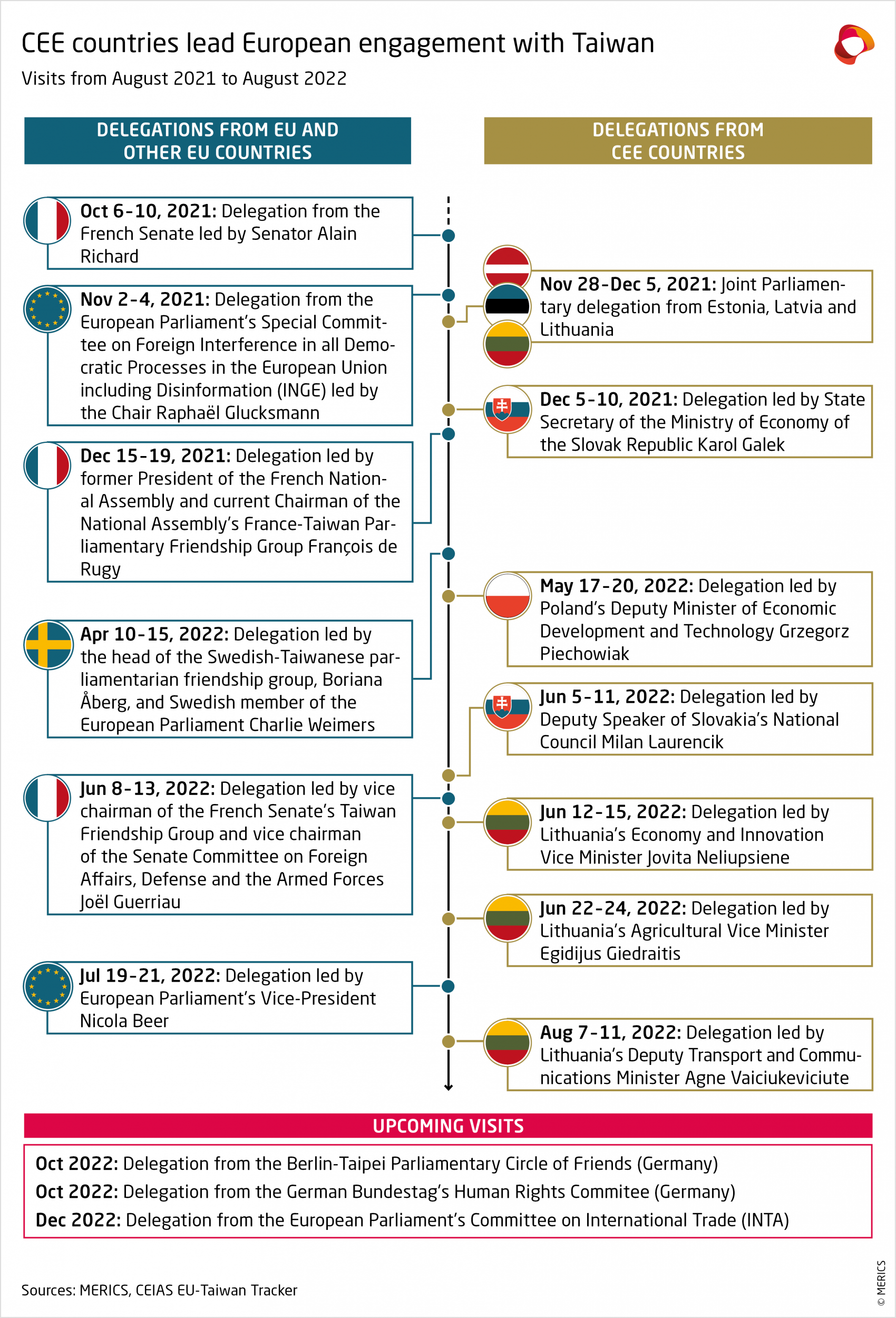 France too has been displaying high levels of commitment. As the established Indo-Pacific power in the EU, France sees events in the area as a matter of national security. For example, in a bold statement, the French Navy Chief of Staff, Admiral Pierre Vandier, argued: “Against the Chinese navy, we will win if we fight together, in a coalition”. The Admiral’s statement is in line with France’s actions; last week it sent seven warplanes in the area for joint exercises with Australia, Singapore and Indonesia.

The crisis has brought out a resoluteness from some unlikely suspects. A delegation from the European Parliament’s (EP) Committee for International Trade (INTA) still has a Taiwan visit scheduled for December.

But even more interesting are the visits by a delegation from the German parliament’s human rights committee slated for the end of October, and a delegation of MPs from the Berlin-Taipei Parliamentary Circle of Friends at the beginning of October. Whether Beijing will sanction Germany for the visits by the parliamentary delegations will reveal if China is ready to harm relations with an important economic partner over Taiwan. Germany’s renewed resoluteness does not seem to stop there, as it strengthens it commitment in the Indo-Pacific by sending 13 military aircrafts to Australia to join 16 other nations in a biennial exercise.

Whereas other member states have been less active with regard to Taiwan. The more Beijing limits the space to maneuver for engaging with Taiwan, the more it pushes Europeans to adopt a clearer position. However, fragmentation does not exist only among member states but also among institutions, where the pragmatic and cautious European Commission may try to dissuade future parliamentary delegations from visiting Taiwan for fear of destabilizing the new status quo Beijing is shaping. In that regard, the endeavors of the INTA visit could be an insightful case study and we will be keeping a close eye on any signals coming out of the Commission.

The past few months have seen a series of attempts by Beijing to stabilize the relationship with the EU. However, the signaling exercised by Beijing has been low cost and low risk, and it has stayed clear of the real issues that prevent substantive stabilization that would allow for further collaboration between the EU and China. In an article for EU Observer, MERICS Analyst Grzegorz Stec writes about how the EU should advance targeted cooperation while remaining cautious of perceiving Beijing’s recent attempts for more than what they actually are: “a politically motivated request for temporary stabilization”.

It’s Baltic out there! On August 11, the diplomatic temperature dropped when Latvia and Estonia joined their neighbor Lithuania in giving Beijing's club the cold shoulder — a format created to engage with Central and Eastern European (CEE) countries. The framework born as 16+1 had a brief expansionary moment when Greece joined in 2019, the enthusiasm probably spurred Xi Jinping’s statement at the February 2021 China-CEE summit that “17 plus 1 could make more than 18”.

However, one month later, the new 17+1 dynamic quickly changed when Lithuania decided to give China the cold shoulder, reducing the membership back to 16+1. Now, a little more than a year later, the count is further down to 14+1 and since it’s snowballing, others may follow suit. For the moment, there has been no official response from Beijing, but unsurprisingly the Global Times has blamed a large part of the decision on US pressure. The article also highlights how Estonia and Latvia’s decision will not impact the format but only result in leaving themselves out in the cold, as the US and the EU offer little insulation.

Zelensky wants to talk to Xi: Ukraine’s President said that he is looking for ‘direct talks’ with Xi Jinping to “use its outsize political and economic influence over Russia to bring the fighting to a stop”. Zelensky’s words bring the debate over China’s role as mediator back to the fore. In the first weeks of the conflict, China itself seemed reluctant to take on the role, and the situation is unlikely to have changed since. Furthermore, China is hardly equidistant from the parties involved, yet returning the spotlight onto China’s position in all of this retains pressure on them to not actively support Russia’s war.

Italian news agency ANSA ends cooperation with Xinhua: The decision was not followed by any big announcement, but it was long overdue. The agreement included the dubious practice of re-publishing Xinhua’s articles in Italian verbatim. Although the most controversial, the ANSA-Xinhua collaboration is hardly the only collaboration between European and Chinese media outlets.

Lithuanian and Taiwanese company want to collaborate on EV manufacturing: The Lithuanian company UAB Vėjo projektai and Taiwan’s TAV have signed a memorandum of understanding for manufacturing electric vehicles. The signing comes as a tangible outcome of a visit that triggered the sanctioning of Agnė Vaiciukevičiūtė, Lithuania’s Deputy Minister of Transport and Communications by Beijing. But Lithuania is not new to Beijing’s sanctions and so far, they have not prevented the country from strengthening its relationship with Taiwan.

China announces investment in Hungarian battery plant: China's Contemporary Amperex Technology Co Limited (CATL) wants to invest the impressive amount of EUR 7.34 billion to build a 100 GWh battery plant in Hungary. It will be located in the industrial hub of Debrecen, near the automotive plants of BMW, Volkswagen, Stellantis, and Mercedez-Benz — who has already jumped on board, ensuring to be the first to receive the cells produced in the new plant.