EU-China calendar: What to keep an eye on for the remainder of 2022?

Several key events may signal adjustments in the trajectory of EU-China relations. Since the beginning of the year, relations have continued to decline. China-Lithuania tensions spilled over to the EU level prompting Brussels to launch a case against China at the WTO. Beijing’s sustained tacit support for Moscow since Russia’s invasion of Ukraine has further strained relations. The strained EU-China summit and characterization of China as a security challenge in NATO’s strategic concept exemplifies the situation. The crisis in the Taiwan strait over the summer ushered an additional dimension to the tensions.

You are reading a free excerpt from the September 02, 2022 issue of our MERICS Europe China 360° Brief. Become a subscriber to get access to all contents. Find out more about our subscription packages here.

Ahead of the 20th National Congress of the Chinese Communist Party (CCP) in October, Beijing is attempting to stabilize relations with the EU or at least avoid major fallouts. China’s government officials reached out to European counterparts at July's G20 foreign ministers meeting in Bali and reportedly invited selected European leaders to visit Beijing this fall. Then, Chinese state airlines moved to purchase almost 300 Airbus jets. In addition, Beijing agreed conducting in the EU-China High-level Economic and Trade Dialogue, despite initial unwillingness to set its date. However, these signals were primarily diplomatic and low-cost.

So, what events remain in 2022 that are significant for how EU-China relations evolve? 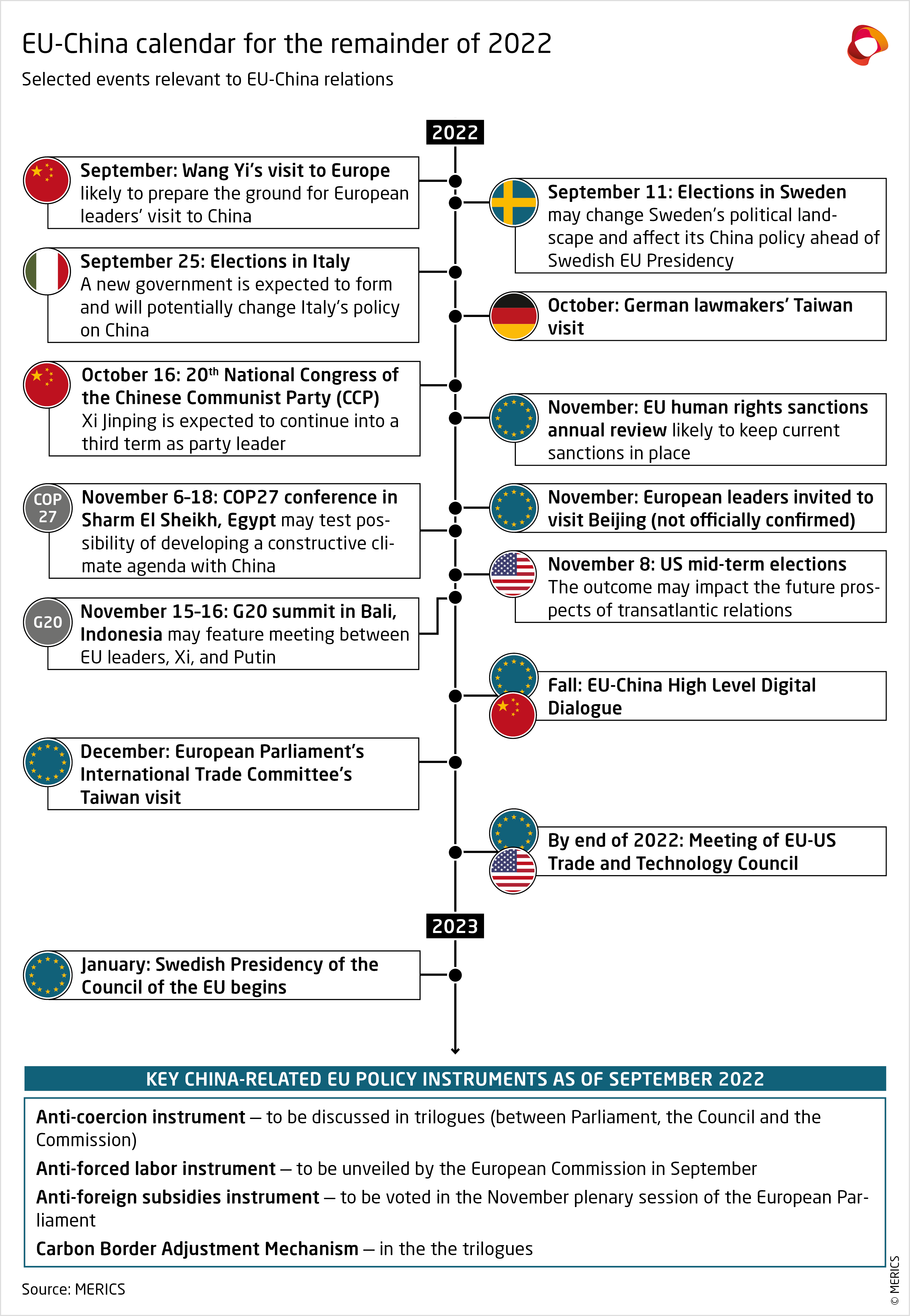 The CCP’s upcoming party congress, China’s most important political event that occurs once every five years, will set the tone for Xi Jinping’s anticipated third term as party and state leader. Xi’s speech will signal the broad vision for the party while the new Politburo Standing Committee could signal where potential change lies. That includes foreign policy, with the party’s top diplomat Yang Jiechi set to retire.

Following the Congress, Beijing may also announce the new Chinese Ambassador to the EU, as per suggestions of China’s Ministry of Foreign Affairs (MFA). The position has been left vacant since Zhang Ming left in December 2021. The choice of the new Ambassador will signal whether Beijing wants to command a more confrontational or conciliatory voice in Brussels.

It is also in the context of the party congress that China extended an unofficial invitation to the leaders of France, Germany, Spain and Italy to visit Beijing, the first time since the pandemic began. The member states’ decision on how to navigate such a selective, likely a G20-membership-based invitation and what message to convey should the visit materialize, will be indicative of the level of European unity on China.

The G20 summit in Bali will perhaps bring Xi Jinping and Vladimir Putin face-to-face with the leaders of EU member states. Tensions between the EU and China over different outlooks on Russia’s invasion of Ukraine will likely be on display — with both sides’ actions being indicative of how much of a roadblock it remains for their relations. The summit will also be significant in terms of political communication regarding the positioning of multiple developing countries amid tensions between G7 and Sino-Russian attitudes.

German lawmakers and the European Parliament’s International Trade committee are planning to visit Taiwan in October and December respectively, with similar visits possible by other European lawmakers. Following the heightened tensions stemming from Beijing’s reaction to Nancy Pelosi’s visit to Taiwan, the EU can expect pushback from such visits, as already exemplified by the sanctioning of the Lithuanian Deputy Transport and Communications Minister over her visit to Taipei.

Francesca Ghiretti
Analyst
Print this Article
Share this Article
EU-China calendar: What to keep an eye on for the remainder of 2022
China sells LNG to Europe
Short Takes