Over three months after Russia attacked Ukraine and amid rising US-China tensions in the Indo-Pacific, Beijing’s tone regarding Taiwan has become even more aggressive. Chinese Defense Minister Wei Fenghe used the Shangri-La Dialogue on Asia-Pacific security, held in Singapore from June 10-12, to deliver a combative address about geopolitical dynamics in the Indo-Pacific. He reserved his harshest words for Taiwan and for the United States’ “power politics”.  Just days after US President Joe Biden said that the US would respond militarily if China attacked Taiwan, Wei proclaimed that China “will not hesitate to fight” if anyone dared to help Taiwan “secede” from China.

The following day, China’s Foreign Ministry took up the issue of Taiwan again during its regular press conference. Spokesperson Wang Wenbin claimed that the Taiwan Strait cannot be designated international waters, as China has “sovereignty and jurisdiction over the Taiwan Strait". These claims have apparently been repeated by Chinese officials in meetings with US counterparts, according to media reports. This harsh rhetoric and military pressure on Taiwan – which may extend to China attempting to block foreign military vessels from entering the Taiwan Strait – are signs Beijing is preparing for the eventuality of taking the island by force, should it decide red lines have been crossed.

While China has gone to great lengths to deny any connections between its steps regarding Taiwan and Russia’s attempt to seize its southwesterly neighbor, Beijing will have been watching Moscow’s invasion of Ukraine closely for any lessons it may distill for its own plans for Taiwan. The war in Eastern Europe will have underscored the key importance of preventing other powers from getting involved, either by achieving a fast victory or by blockading Taiwan to prevent the arrival of Western supplies or reinforcements. China’s claims regarding the legal status of the Taiwan Strait seem like an attempt to draw a new red line and create facts on the ground to this effect.

MERICS analysis: “Wei’s comments are not a sign that an invasion of Taiwan is imminent, as this is still an outcome that the Chinese leadership would ideally like to avoid,” said Helena Legarda, Lead Analyst at MERICS: “It is likely that the People’s Liberation Army (PLA) will want to revise its war scenarios for Taiwan based on lessons from the war in Ukraine. This will take time. But current trends suggest that Beijing is increasingly likely to resort to military means in the mid-term, given the failure of repeated attempts to convince Taiwan’s successive governments and population to ‘reunify’ with China. It does appear to be laying the ground for such an attack.”

Up to 60 million online followers of Chinese influencer Li Jiaqi inadvertently caught a glimpse of one of the most censored issues on China’s internet – the Tian’anmen Square crackdown of 1989. As human rights advocates around the world commemorated the tank-led crushing of the protests on June 3-4, 1989, Chinese censors were busy keeping China’s internet clean of any unwelcome references to the events. On June 3, one of their targets was Li, whose livestream was abruptly cut off when he appeared to show a tank-shaped cake on screen. Although the film clip was apparently not meant as a protest, Li’s whereabouts remain unknown. Under the pressure of constant censorship, memory of Tian’anmen is gradually fading in China. But according to reports, at least a part of his young viewers used virtual private networks to research the crackdown. (Source: Reuters)

The facts: A violent assault on three women dining at a restaurant in Tangshan, Hebei province, was caught in graphic detail by surveillance cameras and caused outrage among millions across China. The brutal attack unleashed longstanding sentiments about gender inequality, misogyny and violence against women in China. Online, citizens questioned why China’s advanced surveillance system failed to respond to the incident, why so many passers-by appeared to ignore it and why official media outlets slipped into victim-blaming.

What to watch: Proposed revisions to the Women’s Rights and Interests Law are set for a third and final review by lawmakers in the second half of the year. If passed, acts such as verbal expressions with sexual connotations will be outlawed and employers will be obliged to adopt policies to address sexual harassment in the workplace. However, the changes do not go far enough to address critical shortcomings in legal enforcement. Under the proposed revisions, companies can be fined or have their licenses suspended for failure to report kidnappings or the abuse of women. But the police response in sexual harassment cases will still be limited to “giving criticism and education or issuing a written warning”.

MERICS analysis: “The incident in Tangshan shines a stark light on the precarious status of women in Chinese society,” says MERICS Analyst Valarie Tan. “Their lack of protections and of legal recourse stems from deeply entrenched patriarchal attitudes and a party-state regime which regards women as subjects of the state who are expected to serve the national interest. Feminists and advocates of women’s rights have been labelled as “radical”, “Westernized” and socially de-stabilizing forces. Despite reforms, women are regularly subjected to abuse, harassment, and gender-based discrimination.

The facts: A notable uptick in foreign capital entering China’s financial markets helped to turn what had been capital outflows in previous months to a small net inflow of USD 2.5 billion in May. In previous months, foreign investors had sold Chinese assets as they worried about China getting caught up in sanctions against Russia and the economic effects of Beijing’s renewed Covid-19 lockdowns. But last month foreign investors were buying again. They were apparently spurred by the rising value of key indicators like the blue-chip China Securities Index (CSI), expectations of implicit guarantees after strong pro-growth signals from Beijing, signs that China will avoid getting sanctioned for supporting Russia and the ending of the Shanghai lockdown (at time of writing).

What to watch: With the US Federal Reserve cranking up interest rates to combat high inflation in the US, capital accounts globally are experiencing considerable volatility, with US and European markets looking bearish. Signs of an economic downturn may be driving professional investors in the US and EU to turn to China again. They appear to be hoping that Beijing can tamp down the Omicron variant of the SARS-CoV-2 virus, allowing China to reclaim the “any safe port in a storm” position it had throughout large parts of the pandemic years 2020 and 2021.

MERICS analysis: “From a purely statistical perspective, it seems sensible for foreign investors to be returning to China’s capital accounts,” said Jacob Gunter, MERICS Senior Analyst. “But one does have to wonder how many on Wall Street looked into Premier Li Keqiang’s late May call with officials across the country, which clearly and desperately aimed to keep the economy from falling into complete disarray amidst the ongoing Omicron outbreaks and lockdowns.”

China has another go at establishing an authoritarian internet architecture

The facts: China used the International Telecommunications Union (ITU) conference, Rwanda June 6-16, to push Huawei’s new IPv6+ as an extension of the pending IPv6 standard, which is meant to replace the IPv4 communications protocol to identify and locate computers on networks and route traffic across the internet. The move is part of a rebranding of NewIP, a protocol Huawei unsuccessfully proposed to ITU’s Telecommunications Standardization Advisory Group in 2019. The company wants to replace IPv4 and existing so-called IP-based routing with a system that would enable authorities to dictate traffic flow.

What to watch: Decisions about internet communications protocols are made by two bodies – the Internet Engineering Task Force (IETF), led by private entities, and the government-dominated ITU. With the IETF long unwilling to take up Huawei’s NewIP proposals, China is pushing for the ITU to make more decisions and is using its meetings to get developing countries on its side. Following a backlash against NewIP, Beijing is keen to rebrand IPv6+ as a purely technical change – although it would enable censorship and network segmentation, allowing every country to create and control its part of the internet.

IPv6 is needed because the world is running out of IPv4 addresses. When IPv4 addresses were distributed, the developing world did not receive its fair share. It needs IPv6 to develop internet usage as more devices come with internet connectivity. If Huawei ends up helping developing countries to roll out IPv6, the company could make using its IPv6+ add-on a pre-requisite. As a result, China’s IPv6+ could become the de-facto standard for much of the developing world.

MERICS analysis: “China has learned from the backlash it faced when trying to introduce NewIP,” says Antonia Hmaidi, MERICS analyst. “As a result, it is trying to push IPv6+ on the sly, making it seem like it is a purely technical protocol. In reality, IPv6+ would bring a centralization and segmentation of the internet.”

Among the contenders for a Politburo seat at this fall’s Chinese Communist Party (CCP) Congress, Ma Xingrui brings an unusually broad set of experience. The 62-year-old Heilongjiang native being promoted to Party Secretary of Xinjiang Uyghur Autonomous Region in December 2021, a politically sensitive post, showed Xi Jinping’s trust in him. As his predecessor Chen Quanguo is now also likely to vacate his Politburo seat on account of age, Ma looks set join the CCP’s second-most important decision-making body.

Despite the elevation, Ma could well keep his other job in Xinjiang. This could be intended to signal a shift from Chen’s hardline “counter-terrorism” rhetoric to a new focus on economic development – at least when it comes to official statements.

Ma holds a PhD in mechanics and brings a rare versatility to the job: administrative experience after serving as Governor in Guangdong (2016-21) and business savviness after managing state-owned aerospace enterprises. He is considered part of the “aerospace-clique” (航天系) of officials with experience in space and defense, areas crucial for China’s industrial strategy and national security.

Ma proved himself by helping to develop strategic technologies with dual use applications. A high priority for Xi, this helped Ma rise through the ranks without ever directly working for the CCP’s General Secretary. Having served as Vice-Minister of Industry and Information Technology and as Director of China’s National Space Administration (in which time China saw through its first lunar-surface exploration mission), Ma has a highly diverse profile that includes experience in corporate, technical-administrative and political leadership posts. Add loyalty to Xi and relative youth to that mix – and out comes a strong candidate for even higher office in the future. 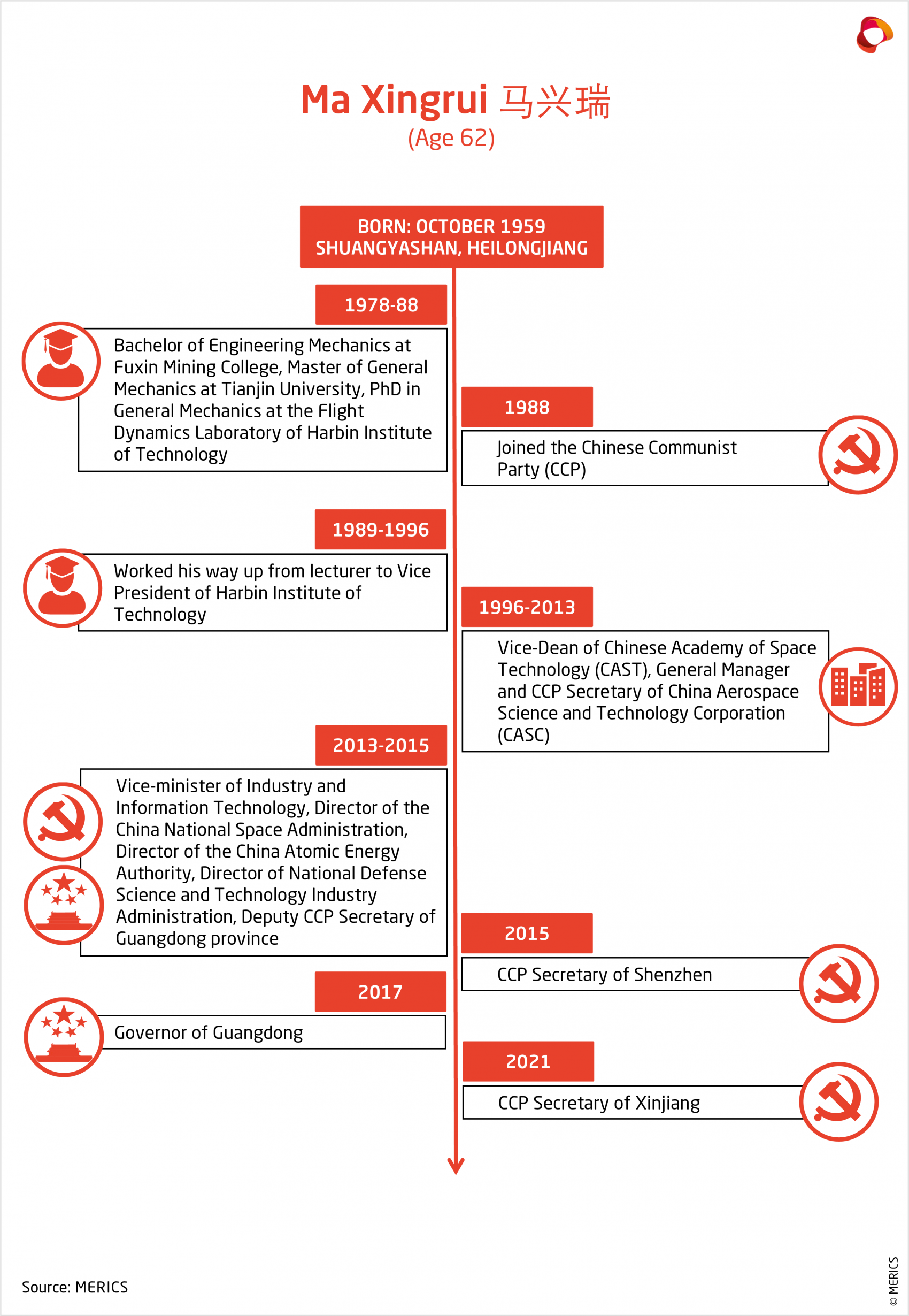 Chinese President Xi Jinping and Russian President Vladimir Putin talked by phone on June 15. Bloomberg reported that Beijing and Moscow gave different accounts of the call in an attempt to manage perceptions of their relations. (22/06/16)

China’s Ministry of Ecology and Environment and 16 other state agencies released a strategy for making China a “climate-resilient society” by 2035. The strategy puts an emphasis on climate-change monitoring, early warning and risk management. (22/06/15)

According to the Hong Kong newspaper South China Morning Post, Hong Kong textbooks from now on will teach students that the city was never a British colony. The new books will reportedly also adopt Beijing’s narrative that the 2019 protest movement was driven by “external forces”. (22/06/15)

China’s financial regulators are close to issuing a license that would clear the path for a revival of Ant Financial’s initial public offering. The fintech giant’s derailed IPO two years ago marked the beginning of a regulatory crackdown on China’s tech sector. (22/06/09)

Washington and Brussels want to cooperate on funding secure digital infrastructure in developing countries. According to an EU official quoted by the WSJ, the US and EU want to provide alternatives to Chinese technology that might come with data-security risks. (22/06/15)