Is the EU’s faith in China as Ukraine-Russia mediator misplaced?

By Francesca Ghiretti and Grzegorz Stec

The EU has been calling on China to exercise its influence on Russia to stop the war and to respect the territorial sovereignty of Ukraine. Beijing remains one of the few countries that can reach out to Moscow and, as such, the EU is right to ask it to use its open channel of communication to convince Putin to at least stop the killing of civilians. Until recently, the EU had not gone as far as calling for China to mediate a peace agreement. But following an interview with the EU’s foreign policy chief Josep Borrell with the Spanish newspaper El Mundo on March 6, it is now openly signaling support for this idea.

Since then, calls from member states for China to be a mediator in the conflict have become louder. In Italy, the discussion has been dominated by voices who express great hope that China could act as mediator and successfully carry out the task. In other member states the public debate has been more focused on the immediate conflict itself, although the possibility of Beijing mediating has been viewed with greater skepticism, as is the case in Poland.

Is it wishful thinking to expect Beijing to mediate? Probably, for two main reasons. China is far from convinced that it should take on this role and, even if it were to, the parameters of the mediation may not be to Ukrainians’ liking. But let’s take one issue at a time.

China is openly hesitant about taking up the role of mediator. President Xi Jinping and Foreign Minister Wang Yi have expressed support for a peaceful, negotiated resolution to the war. But Beijing does not want to be the sole mediator. Instead, it says it would only mediate as part of an international effort and only as a last resort as it would prefer the Europeans and Russia to solve the crisis amongst themselves, purposefully excluding the United States.

The chances of Beijing taking on the role of sole mediator are therefore slim. China views the Ukrainian “crisis” as a European affair and one that it does not wish to become entangled in. An international effort would allow Beijing to avoid any potential risk to be discredited and stay out of a possible European war if attempts to mediate were to fail. Given the already visible consequences on the global economy of the war, it is no wonder that an economic stability-focused China, too, wants a swift solution.

But what if conditions change or Beijing changes its mind and decides to take on a mediator role? Beijing has made very explicit the strength of its relationship with Russia and expressed understanding for Russia’s security concerns. But most importantly, it has also made clear its condemnation of NATO, which it sees as a vehicle for the United States’ influence in Europe. China has gone as far as to say that NATO is to blame for Russia’s actions. Given this, it is hard to imagine that China, as a mediator, would not attempt to weaken NATO and aim for a new security agreement more favorable to Russia and, indirectly, to itself.

Thus, China’s potential mediation attempt would not be very considerate of the desired outcome of Europeans. Regardless of whether Europeans would be comfortable with a peace proposal brokered by China, the fact is that Ukrainians are unlikely to accept the result of China’s mediation. At the very least China would propose a solution very similar to that which Russia has already proposed, including assurance from the West of a buffer zone, meaning Ukraine would be prevented from joining NATO or the EU. This may sound reasonable to some in Europe, but what matters is whether this will sound reasonable to Ukrainians.

All things considered, China is right to push for international mediation, but aside from a few individuals and Israel, there seems to be little appetite from any international stakeholder to take on this role. 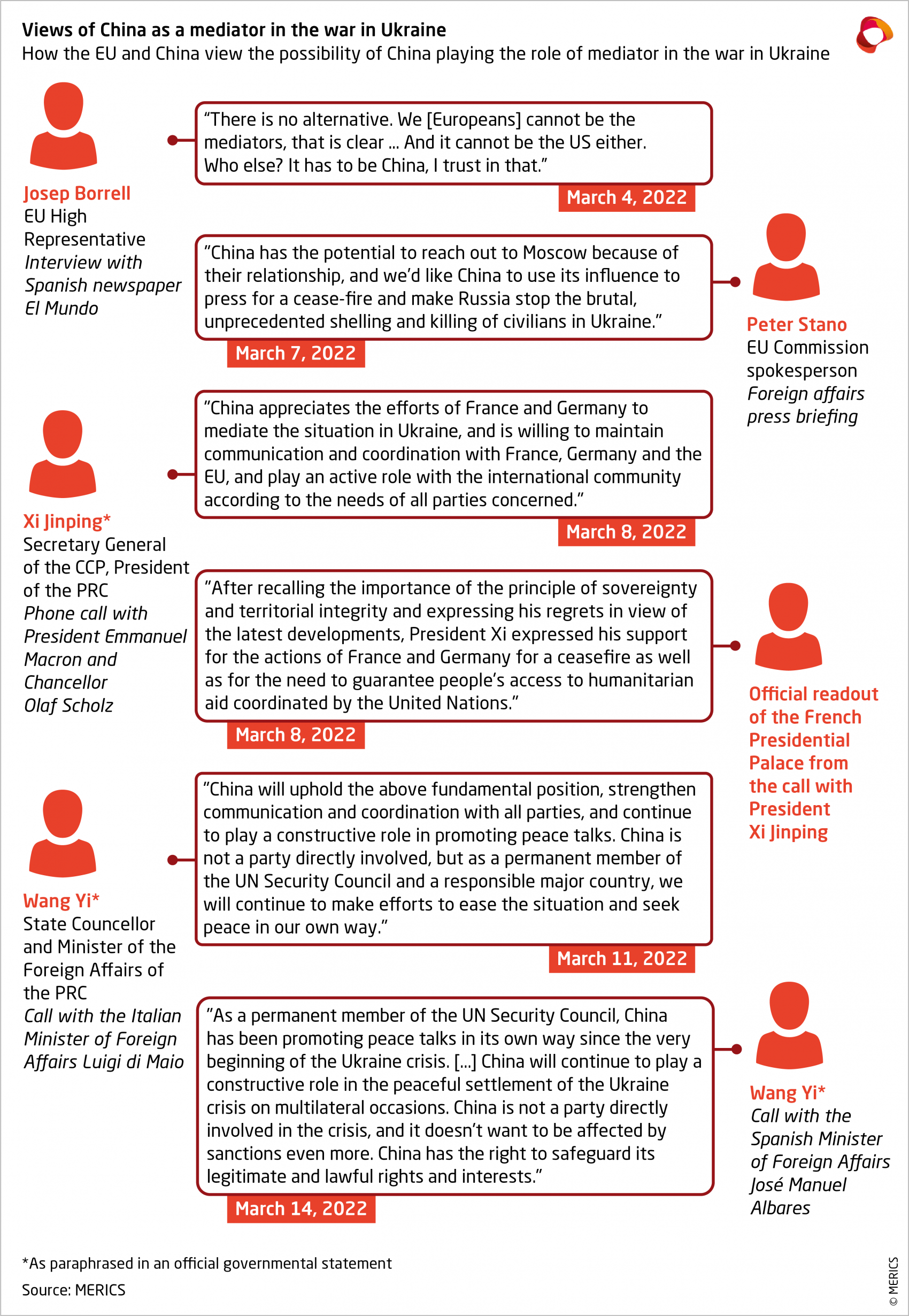 While the debate on the EU’s anti-coercion instrument (ACI) continues in the background, the Commission has already begun testing out the instrument in Lithuania. Since the beginning of the discussions, there has been significant opposition to the idea of a relief mechanism for businesses affected by economic coercion. The reason for this worry is that such a mechanism could create incentives for risk-taking behaviors. Nevertheless, in Vilnius, European Commissioner for Internal Market, Thierry Breton, promised that the EU will propose assistance measures to Lithuanian businesses hit by China’s economic coercion. In his references to the EU’s single market solidarity, Breton reveals his expectation that the support mechanism will be included in the final ACI regulation. But others in Brussels may not share his view.

US and China talk Ukraine in Rome

Whether the Rome meeting has had any impact on China’s stance on the Russian invasion remains unclear. It is highly unlikely that Beijing’s overall political support for Moscow will change. Beijing will likely continue to support Russian interests, even if it avoids explicitly endorsing Russia’s actions.

Military or economic support is, however, another matter. Beijing is likely to calculate the gains and losses of extending practical support. That is why clearly communicating,  ideally in direct diplomatic exchanges, the costs of extending such support can play a role in Beijing’s calculus and actions —  regardless of whether the message comes from the United States or the EU. Such communication should complement the ongoing discussions about Beijing’s potential constructive involvement.

The light at the end of the tunnel for the EU’s International Procurement Instrument?

The International Procurement Instrument (IPI) has been in the EU’s pipelines since 2012. Ten years later, it may finally be approved.

The approval of the IPI would be an important achievement for the EU. There was momentum before January 2022, but much of the credit goes to the French Presidency, who were determined to see this happen before the French national elections.The IPI is a prime example of a new way for the EU to approach the issue of the lack of reciprocity. Instead of just trying to get the counterpart to be more open to European enterprises or adopting a regulatory system similar to that of the EU, Brussels has set in motion changes to its own regulatory system to match the restrictions of others. The benefit of this approach is two-fold. It provides the EU with better protection against unfair practices while not giving up on obtaining greater access in third markets.

The European External Action Service’s EUvsDisinfo initiative released its first ever tweet and article in Chinese. It describes seven pro-Kremlin disinformation myths related to the Russian invasion of Ukraine.

On March 14, Spanish Foreign Minister Jose Manuel Albares exchanged a phone call with his counterpart, Wang Yi, to discuss China’s potential constructive involvement in finding a solution to the war in Ukraine.

The European Parliament adopted the report of the Special Committee on Foreign Interference (INGE). It highlights the need for the EU to improve its democratic resilience and monitor the disinformation activity of external actors, including China. MEPs also called on Belgian authorities to step up their actions against domestic espionage, including from China.

The EU-China rail trade may explore the usage of the southern routes, including passing through the Caspian Sea, due to the disruption caused by the Russian invasion of Ukraine.

Grzegorz Stec
Analyst (Brussels office)
Download (pdf - 1.22 MB)
Print this Article
Share this Article
Is the EU’s faith in China as Ukraine-Russia mediator misplaced?
Buzzword of the week: ACI
US and China talk Ukraine in Rome
The light at the end of the tunnel for the EU’s International Procurement Instrument?
Short takes