EU leaders gathered in Slovenia on Wednesday for the first EU-Western Balkans summit held in person since 2018. The EU has started paying close attention to the influence of Beijing in the Western Balkans. Brussels is concerned that the rollout of China’s Belt and Road Initiative in the region might negatively affect EU integration by impacting necessary progress on environment standards, corruption and financial stability. European leaders share the sense that the EU may be losing geopolitical ground to China.

China featured large in an informal dinner held on the eve of the summit to “discuss the EU’s role in the world.” In his conclusions following the meeting, EU President Charles Michel stated that the EU must pursue its own interests on the global stage “in particular vis-à-vis China.”

The perception that the EU is losing out in the Western Balkans was reinforced by the leader of the largest country in the region, Serbian President Aleksander Vucic. Speaking during the height of the pandemic in Europe as medical equipment arrived from China, Vucic declared European solidarity a “fairytale” and claimed that only the Chinese could help. Of course, Vucic’s words are partly political theatre – he is adept at flaunting ties with China in order to leverage concessions from the EU. In October last year, Vucic asked the EU to fund a railway line linking Belgrade to the Southern city of Nis, adding that he would turn to China if Brussels declined the grant. As of April this year, Brussels committed to provide at least EUR 600 million for the project.

Anxiety about China’s growing influence in the Western Balkans is implicit in parts of the summit declaration. For instance, the passage on “disinformation” from “third-state actors” mirrors an EU External Action Service report on Russian and Chinese propaganda in the region around Covid-19 vaccines.

The declaration’s third paragraph opens with a statement that the EU is “by far the region’s closest partner, main investor and principal donor, and continues to insist that “the unprecedented scale and range of this support must be fully recognized and conveyed” by Western Balkan countries in public communications. The EU, however, has noticed that while it provides much more assistance than China to the region, Vucic is more public in his gratitude towards Beijing; it’s the Chinese, not the EU flag that Vucic has been filmed kissing.

The EU has deepened its financial commitment to the region, including on the hard infrastructure that China is famous for funding. EU leaders at the summit were keen to emphasize the EUR 30 billion investment plan outlined last October, which includes EUR 9 billion of grants over a seven-year period.

As the EU recognizes, however, China is not popular because it provides more money. In Serbia, for example, China is popular partly because it suits the domestic and international political maneuvering of Vucic and partly because anti-Western narratives and dissatisfaction with the European integration process provide fertile ground for pro-Chinese sentiment.

In the summit declaration EU leaders stressed their “commitment to the enlargement process.” This is a step beyond the usual formulation of “support for the European perspective of the Western Balkans,” but there was no adoption of Slovenia’s recommendation to set a date for accession.

The EU’s new financial commitments are significant, but as Brussels recognizes – it has always contributed more than China in reality. In failing to set a date for accession, the EU has missed an opportunity to challenge Beijing’s appeal by tackling Western Balkans dissatisfaction with the integration process.

Merkel’s popularity in China is high. On Wednesday, Xi Jinping even awarded her the honorary title of "old friend" of the Chinese people. She is often described as a “pragmatic” leader who has prioritized cooperation with Beijing and led her country to become Europe’s strongest economy. "She will be missed and remembered,” concluded one recent article by Guancha Syndicate. With her sixteen-year spell as chancellor now ending, analysts in China are predicting what may lie ahead. Regardless of which parties form the new coalition government, most Chinese experts anticipate growing tensions with Berlin, in the short term at least. In the face of such adversity, they recommend patience and restraint. 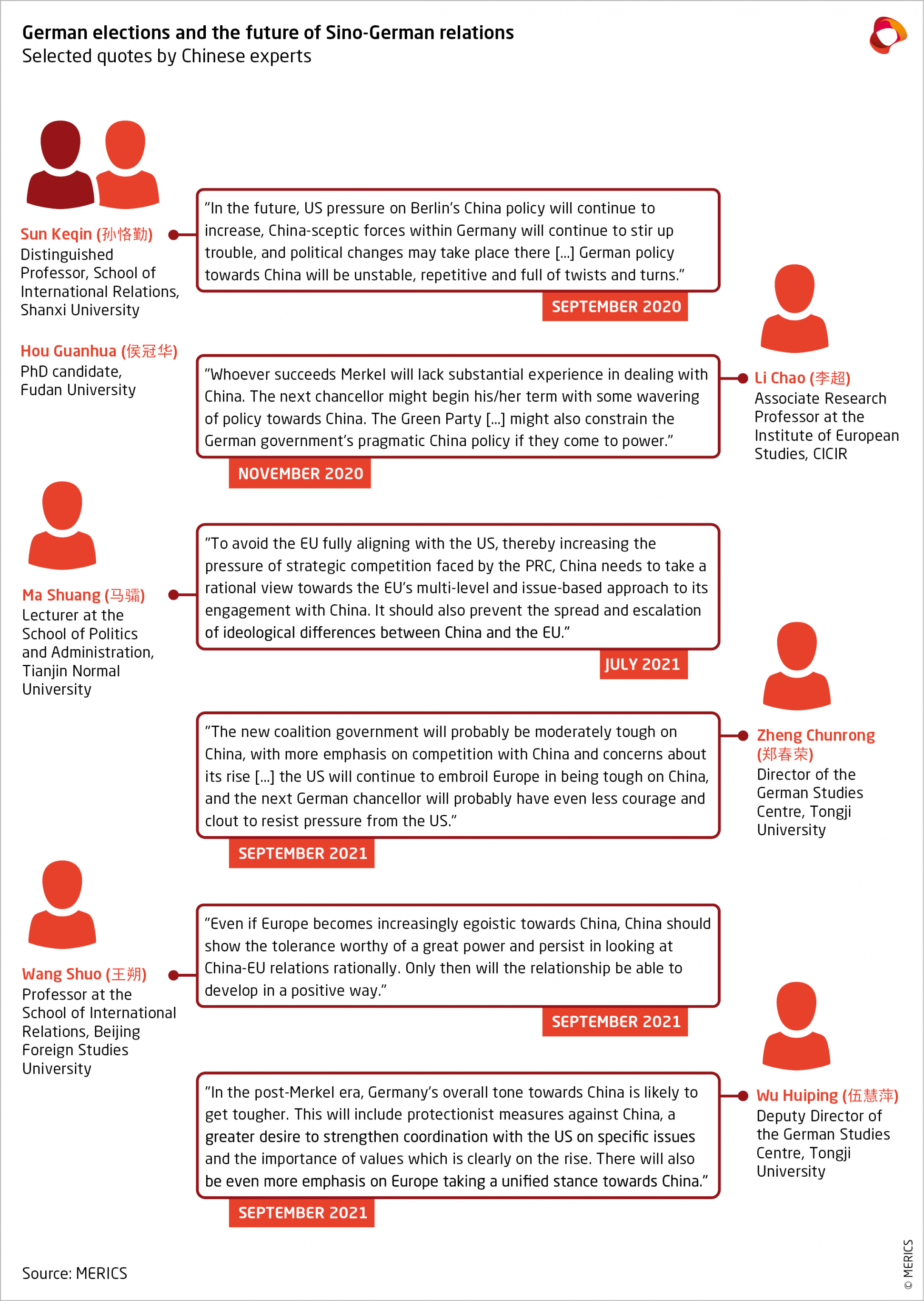 Beijing wants a strong and stable Germany and has been worrying about the state of German politics for some time. As Li Chao, an academic at the influential China Institutes of Contemporary International Relations (CICIR), remarked last year, Germany has been experiencing “severe domestic political fragmentation” in recent years which has weakened “the big parties.” Most analysts view both the CDU/CSU alliance and the SPD as more or less in line with Merkel’s “pragmatic” approach to Sino-German relations. The key variable for them has always been the extent to which “the smaller parties” would influence the next German government. They will be the real troublemakers, they believe.

Another worry for China is the power vacuum left by Merkel’s imminent departure. Chinese experts see both the CDU and the SPD as being undermined by intra-party conflicts. “The two [current] SPD leaders are more left-leaning, while Scholz is more to the right […] internal contradictions will gradually emerge,” writes Zheng Chunrong, Director of the German Studies Centre at Tongji University. He and others worry that Scholz or Laschet might not have enough Merkel-like authority to keep differing coalition voices in line with future government policies. Therefore, they expect a certain amount of volatility in Berlin’s initial signaling to Beijing.

Beijing should counteract the US’s influence on Berlin

The power shift might also mean more scope for the United States to influence Germany’s China policy, some say. Although most Chinese analysts regard Germany as Washington’s closest ally in post-Brexit EU, opinions vary on just how much sway Washington still has over Berlin. As usual, there are those who lay most of the blame on the US for Germany’s so-called “anti-China” moves, while others highlight the deepening distrust in transatlantic relations and the EU’s emphasis on strategic autonomy. Nevertheless, Chinese experts’ view is that Beijing should expect greater policy coordination and “common language” between Germany and the United States when it comes to China.

Despite such uncertainties, most analysts in China express confidence in the mid-to-long-term prospects for Sino-German relations. Some insist on the so-called traditional aspects of German politics characterized by consensus building at home and a low profile abroad. They point to Germany’s dependence on the Chinese market and its need for economic growth. Beijing should explore new ways of deepening its trade and investment ties with Berlin and Brussels, they suggest. Other areas of cooperation such as the environment, global health or the strengthening of multilateral institutions are often cited as further vectors of trust-building.

Overall, the main message from China seems to be that Germany, and by extension the EU, are too important right now for Beijing to alienate. China should therefore find ways of preventing the Franco-German tandem in particular from moving closer to the US. Beijing should fight back when its core interests are at stake, but otherwise act with restraint and equanimity when it can. Whether President Xi will follow such advice, is of course another matter.

According to a survey conducted by Good Judgement Inc in cooperation with MERICS, earlier this year a majority of forecasters believed that the CAI would still go through after January 2022, whereas now, the favorable answer is a hard “no.” After the European Parliament symbolically decided to freeze the ratification process in May, it became evident that CAI was de-facto dead. At least until China lifts the sanctions imposed last Spring against European actors. But even then, any political will to ratify the agreement may still be lacking. 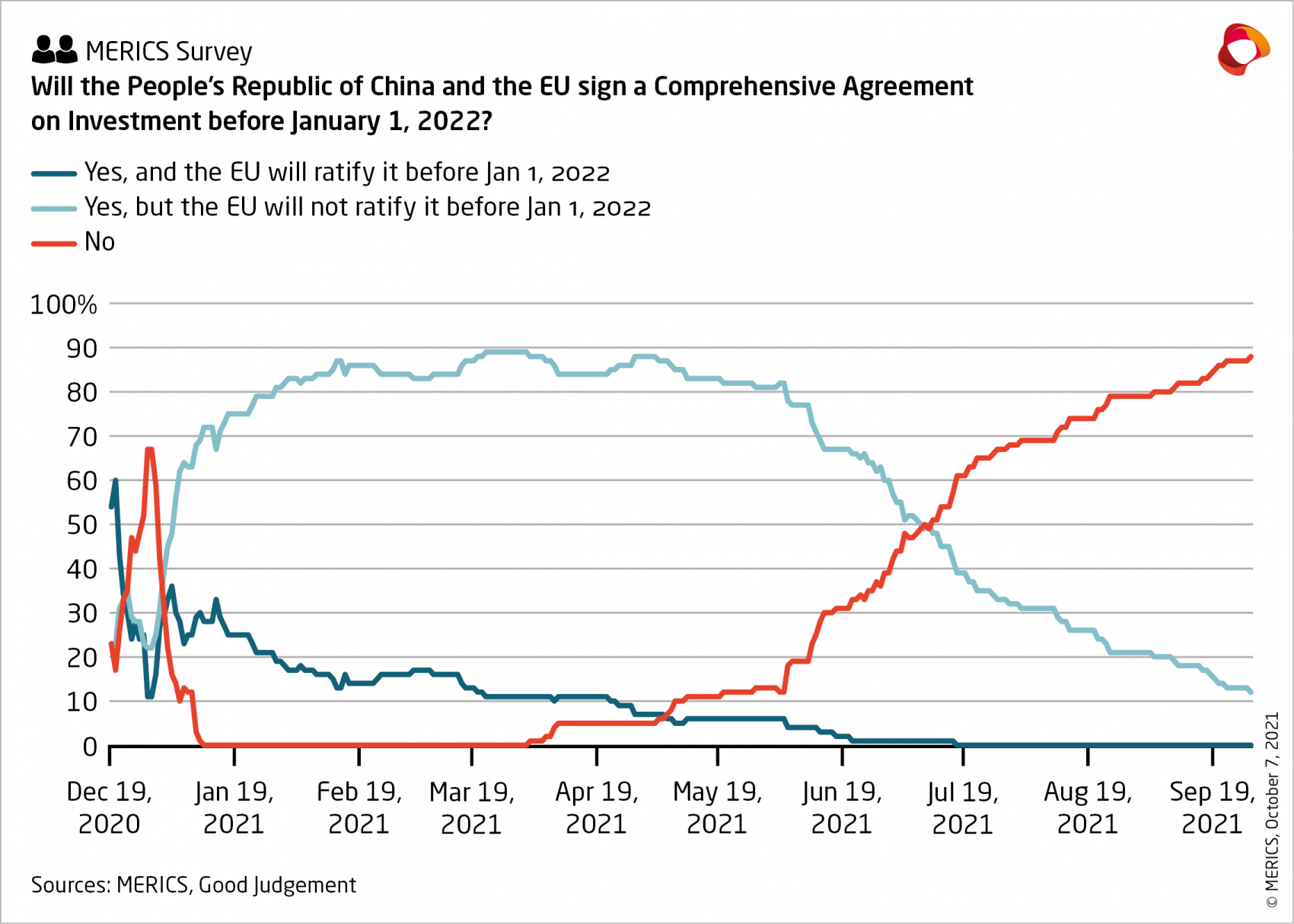 A marginal role for China at the European leaders’ dinner

Quick take: It comes as no surprise that the European leaders amended the agenda to address more pressing issues. Nonetheless, leaders missed an occasion to foster momentum for a more concrete, and hopefully, operational, China policy. After the informal summit, High Representative Josep Borrell stressed how important it is for the EU to be proactive and not simply react to events. In the meantime, policymakers are waiting to see where the “Strategic Compass” will point to. As things stand, however, without any serious strategizing from Brussels, pressing events are likely to continue hijacking the European agenda.

Czechs voted in dramatic elections last week that will likely result in a change of government with Prime Minister Andrej Babiš losing his office. Depending on who forms the new government, the country’s position on China may be set to change.

Quick take: The shift in Czech politics comes ahead of the country’s EU presidency scheduled for the second half of 2022. The Czech Presidency could become a counterbalance to the French agenda of strategic autonomy, depending on how sympathetic the new Czech government will be towards the US - including on China. Still, Prague may continue to send sympathetic gestures to Beijing through President Zeman, who is set to remain in power until 2023 provided his health allows.

The call may be an attempt to stabilize the EU-China relations and an opportunity to display unity, as Michel will present a position agreed by EU27 in Slovenia.

The statement, released on October 10 comes two weeks after the dialogue took place and provides a general outline of prospective EU-China climate cooperation.

Sweden’s administrative court upheld a ban on Huawei’s 5G equipment in June. Now, the Huawei appeal could have further implications for other member states.

Widely used across Europe, Hikvision’s equipment has caused controversy over its data practices and their involvement in the detention of Uighurs in Xinjiang. The company released an update to fix the vulnerability.

One justification for anti-dumping duties is the fact that SOEs have party members in their management or on the board of directors, which could have implications for other EU-China trade disputes.

Over the course of the past weeks, the EU’s agenda was filled with Indo-Pacific related developments ranging from the successful release of the EU’s Indo-Pacific strategy to shock linked to the cancellation of the French military sale to Australia and the announcement of the AUKUS alliance.

In this episode, we talk with Mr. Gunnar Wiegand, the Managing Director for Asia and the Pacific at the European External Action Service, an institute at the forefront of the EU’s engagement with the Indo-Pacific region and China.

The conversation touches on a range of strategic issues related to the EU’s ambitions and capabilities in the region, EU-China relations in the Indo-Pacific, EU-Taiwan ties and transatlantic cooperation.