Back in December, Chinese State Councilor and Foreign Minister Wang Yi promised an audience of policymakers in Brussels that Europe would be high on Beijing’s diplomatic agenda for 2020. The conclusion of a Comprehensive Agreement on Investment (CAI) with the EU – under negotiation since 2014 – by the end of this year was its top economic priority.

China’s diplomatic offensive in Europe over the past two weeks – a counter-response to recent visits by White House officials – has confirmed Beijing’s unprecedented attention for the region. Now all eyes are on a video conference scheduled for September 14 between Chinese President Xi Jinping, EU leaders Charles Michel and Ursula von der Leyen, and German Chancellor Angela Merkel, as holder of the rotating presidency of the Council of the EU.

Minister Wang and Chinese Communist Party’s top diplomat and Politburo member Yang Jiechi have just completed a tour of seven European countries, which they hoped would set the stage for next week’s meeting. The reception they received, however, was rougher than expected. Wang’s calls to uphold multilateralism and focus on CAI were met with criticism of Beijing’s human rights violations in Xinjiang and its imposition of a National Security Law (NSL) in Hong Kong. A further bone of contention was the Hong Kong Legislative Council elections, which were originally scheduled for September 6 but have been postponed to next year. Hong Kong police forcefully dispersed protests on Sunday, arresting some 300 people. A video of an officer tackling down a 12-year-old girl went viral.

In Berlin, German foreign minister Heiko Maas got straight to the point and called for China to withdraw the NSL. He also asked for a UN observer mission to Xinjiang. If that was not enough, the German government chose the day of Wang’s visit to Germany to release its Indo-Pacific strategy, formally adopting a concept that was seen until recently as too confrontational towards Beijing.

While Yang’s trip to Greece and Spain was lower key, he also did not hear the exclusively positive words that Chinese officials have been accustomed to in their visits to Europe. In Spain’s official readout of the meeting with Yang there was no failure to mention 5G networks security or Beijing’s behavior in Hong Kong and the South China Sea.

What to watch: Wang and Yang may be feeling bruised by their reception in Europe, but European governments still remain open to cooperation with Beijing both economically and on the Covid-19 pandemic. The trip has made clear, however, that they expect China to deliver concrete results and will not just accept the usual promises of economic opening. Xi Jinping has emphasized the driving role of Chinese SOEs in China’s post-pandemic economic recovery – adding to already-existing obstacles that make the conclusion of a CAI by year end unlikely.

MERICS analysis: “Now the ball is in China’s court. If Beijing wants to avoid alienating Europe any further and prevent the creation of a Transatlantic front on China – the prospects of which would be more likely in the event that Joe Biden wins the US Presidential elections in November – at next Monday’s meeting Xi needs to be ready to walk the talk on investment negotiations,” says MERICS analyst Lucrezia Poggetti. 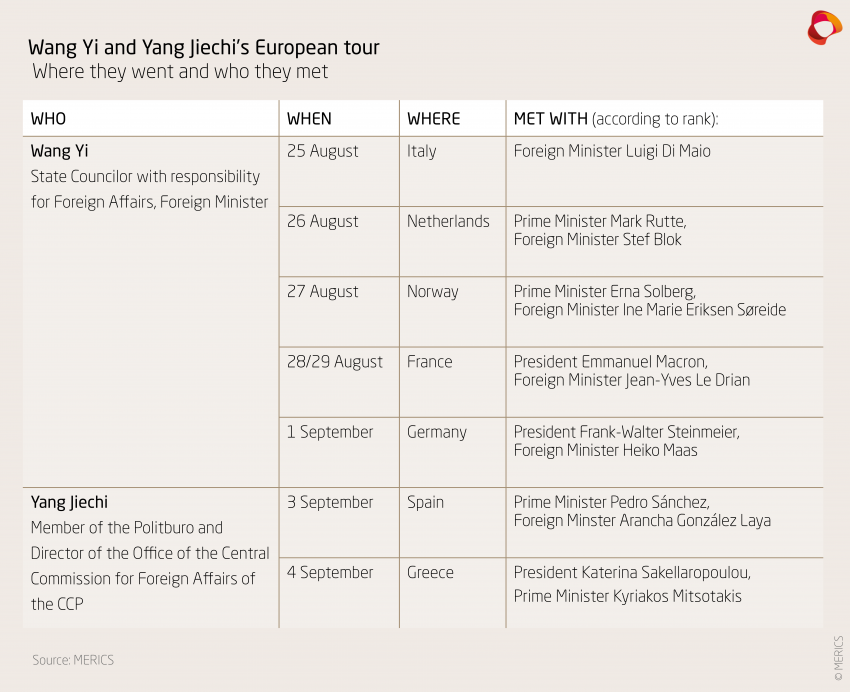 Overseas demand helps China’s economic recovery – but can it last?

The facts: China’s economic recovery is being driven by strong overseas demand. According to the latest release of trade data, China is running a trade surplus of 58.9 billion USD. More than half of that surplus is with the United States – in spite of all the talk of “decoupling”. Indeed, at 34.2 billion USD China’s trade surplus with the United States is currently its second largest in history.

While exports are strong, retail sales have not yet recovered. Overall, so far this year China’s recovery has been sluggish with no month recording positive growth. Data released on September 7 show exports rose in August by 9.5 percent (down by 2.3 percent on the year to date), while imports fell 2.1 percent (down 5.2 percent on the year to date). Official reserves increased by 9 billion to 3,307 billion USD.

MERICS analysis: To avoid any economic fallout from the pandemic at home, Beijing is maintaining high production levels. With dampened domestic demand, that means any surplus is shipped abroad. Meanwhile, China’s imports of US goods have fallen. At this rate, it does not look likely that China can meet the demands in the phase one trade deal with the United States, under which it agreed to increase purchases of American products and services by at least 200 billion USD over the next two years.

What to watch: Poor import and retail performance indicate that internal demand is still weak in China. With Beijing using investment and exports to ensure employment increases, the rest of the world will have to absorb China’s surplus. However, this may not be tenable for long as demand is not strong elsewhere and other governments may be tempted to help their domestic industries instead, through trade action to support employment.

Protests against increased Sinicization of school lessons in Inner Mongolia

The facts: Thousands of school children and parents in cities in the northern Chinese autonomous region of Inner Mongolia are protesting against a change to school textbooks that took effect on September 1. As in the autonomous regions of Tibet and Xinjiang, first graders in primary and middle schools will no longer be taught subjects like history, politics and “ethics and the rule by law” from textbooks written in Mongolian, but in Chinese. Following demonstrations and school boycotts in several cities and districts, the police have arrested at least 23 people. Party and administrative authorities have dismissed several Mongolian officials and civil servants who refused to end the children’s school boycott and have initiated disciplinary proceedings against them. The Chinese government has justified the step as a gradual expansion of bilingual schooling to give ethnic minorities more opportunities as well as "improving the recognition of the Chinese nation", as the Global Times put it.

What to watch: The Chinese government is intent on pushing through its strategy of forced assimilation of all ethnic minorities – if necessary, with even more violence. Just as in Tibet and Xinjiang, Beijing is likely to deploy further surveillance measures and repression to break any resistance.

MERICS analysis: “This seemingly minor change in the curriculum is a central plank of Beijing's policy of imposing a Communist-defined Chinese identity on all sections of the population,” says MERICS expert Kristin Shi-Kupfer. “Furthermore, Inner Mongolia, like Tibet and Xinjiang, has an important geopolitical significance as a border region and as a source of raw materials.”

Reinhard Bütikofer: "We are learning to avoid being enchanted by ‘win-win’ rhetoric.”

MERICS China Briefing spoke with Reinhard Bütikofer, member of the European Parliament, member of the Greens/European Free Alliance Parliamentary Group, chairman of the Delegation for Relations with the People's Republic of China (D-CN), member of the Committee on Foreign Affairs (AFET).