Building on a long-standing collaboration between Rhodium Group and MERICS, this report summarizes China's investment footprint on the EU-27 and the UK in 2021, analyzing the shifting patterns in China's FDI, as well as policy developments in Europe and China.

Chinese global investment was an exception to this trend and stalled in 2021. According to official Chinese statistics, China’s outbound non-financial investment increased by 3 percent only in 2021 to USD 114 billion (EUR 96 billion). China’s global outbound M&A activity slipped to a 14-year low in 2021, with completed mergers and acquisitions totaling just EUR 25 billion, down 9 percent from 2020 and 45 percent from 2019.

That China’s global outward foreign direct investment (OFDI) did not recover was due to several factors: China’s overseas investment activity had been declining since 2016, due to domestic constraints on outbound capital flows and tightening scrutiny of Chinese investments abroad.

The lack of a recovery is also likely linked to China’s adherence to a zero-Covid strategy, which hindered cross-border travel and thus deal-making activities. What’s more, sharp competition for global assets in a booming M&A context likely put Chinese buyers at a disadvantage due to their limited international experience and emerging regulatory concerns. 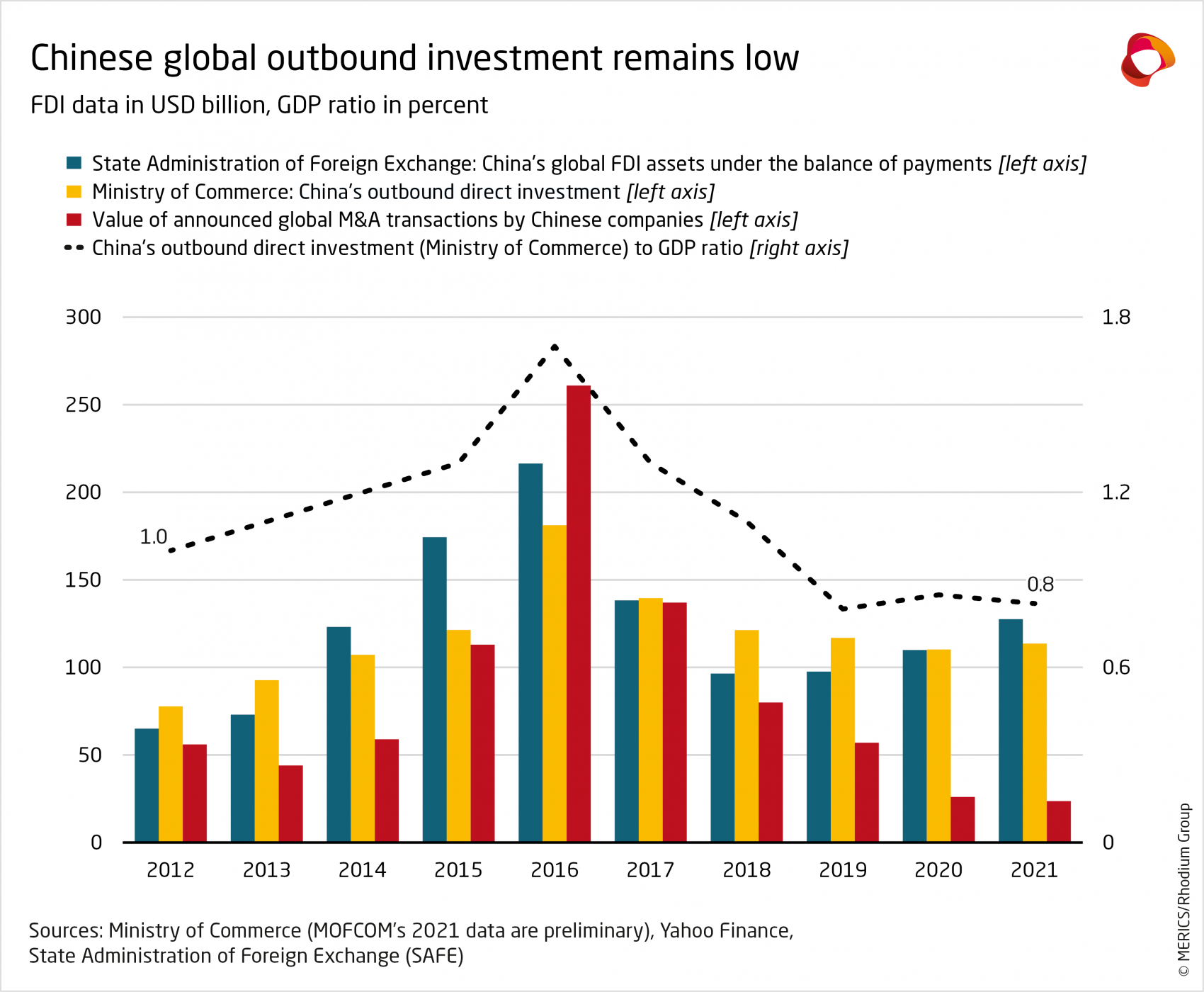 2.1 Chinese FDI in Europe remained at an 8-year low despite rebound

While China’s global outbound investment did not recover in 2021, Chinese FDI in Europe rebounded, increasing 33 percent from a Covid-induced low point of EUR 7.9 billion in 2020 to EUR 10.6 billion in 2021 (see exhibit 2). The rebound occurred despite continued outbound capital controls in China, pandemic-related travel restrictions, and a now fully operational EU FDI screening regime. However, Chinese investment in Europe remains at very low levels compared to the 2016 high of EUR 47 billion.

Much of the 2021 increase was related to one very large transaction: The Hong Kong-based private equity firm Hillhouse Capital purchased Philips’ home appliances unit. This EUR 3.7 billion acquisition accounted for roughly one third of total Chinese investment in Europe and was the sixth largest ever recorded Chinese investment in Europe. Single large deals like this in an environment of overall low investment volume make it difficult to identify clear, long-lasting trends.

Several other large acquisitions were announced in 2021 but did not go ahead. Gopher Investments shelved a multi-billion EUR bid for the British gambling software developer Playtech (although they still plan to acquire Playtech’s financial trading division in 2022). Tencent saw its planned acquisition of British video game developer Sumo Group stall due to investment screening in the United States (the transaction will go ahead in 2022).

While Chinese M&A grew by 26 percent, accounting for 69 percent of the total (EUR 7.3 billion), it remained below pre-pandemic levels. Greenfield investment was the real surprise, reaching a record high of EUR 3.3 billion (We discuss this development in chapter 3.1).

Investment in Northern Europe remained stable at EUR 1.2 billion, on the back of strong Chinese investment in Finland (at EUR 891 million). The biggest deal in the region was Shenzhen Mindray’s purchase of Hytest Invest OY, a Finnish medical device maker, for EUR 560 million. Albeit at a low level, Chinese investment in Ireland (EUR 238 million) reached its second highest value ever, primarily due to ByteDance’s (Tiktok) ongoing investments in a local data center.

Solidifying a four-year trend, private companies continued to dominate Chinese investment in Europe in 2021. At EUR 9.3 billion, their investments accounted for 88 percent of the total, compared to an already high 83 percent share in 2020. Investments by state-owned companies decreased by 10 percent in volume, from EUR 1.4 billion in 2020 to EUR 1.3 billion in 2021. Their 12 percent share of total investment was the lowest since 2001.

State-owned enterprises remained focused on acquisitions. Their biggest deals were concentrated on energy and infrastructure sectors in Southern Europe. In Spain, the power company China Three Gorges purchased renewable energy assets for over EUR 500 million (and already announced plans to purchase a Spanish wind park portfolio for EUR 305 million in 2022).

In Greece, shipping conglomerate COSCO acquired additional shares in the port of Piraeus for EUR 128 million, bringing its ownership up to 67 percent overall. That acquisition came as part of an agreement that required COSCO to also invest EUR 294 million as greenfield investment to upgrade the port’s terminals. Even though COSCO has only invested about a third of that sum to date, the acquisition was allowed to go ahead. 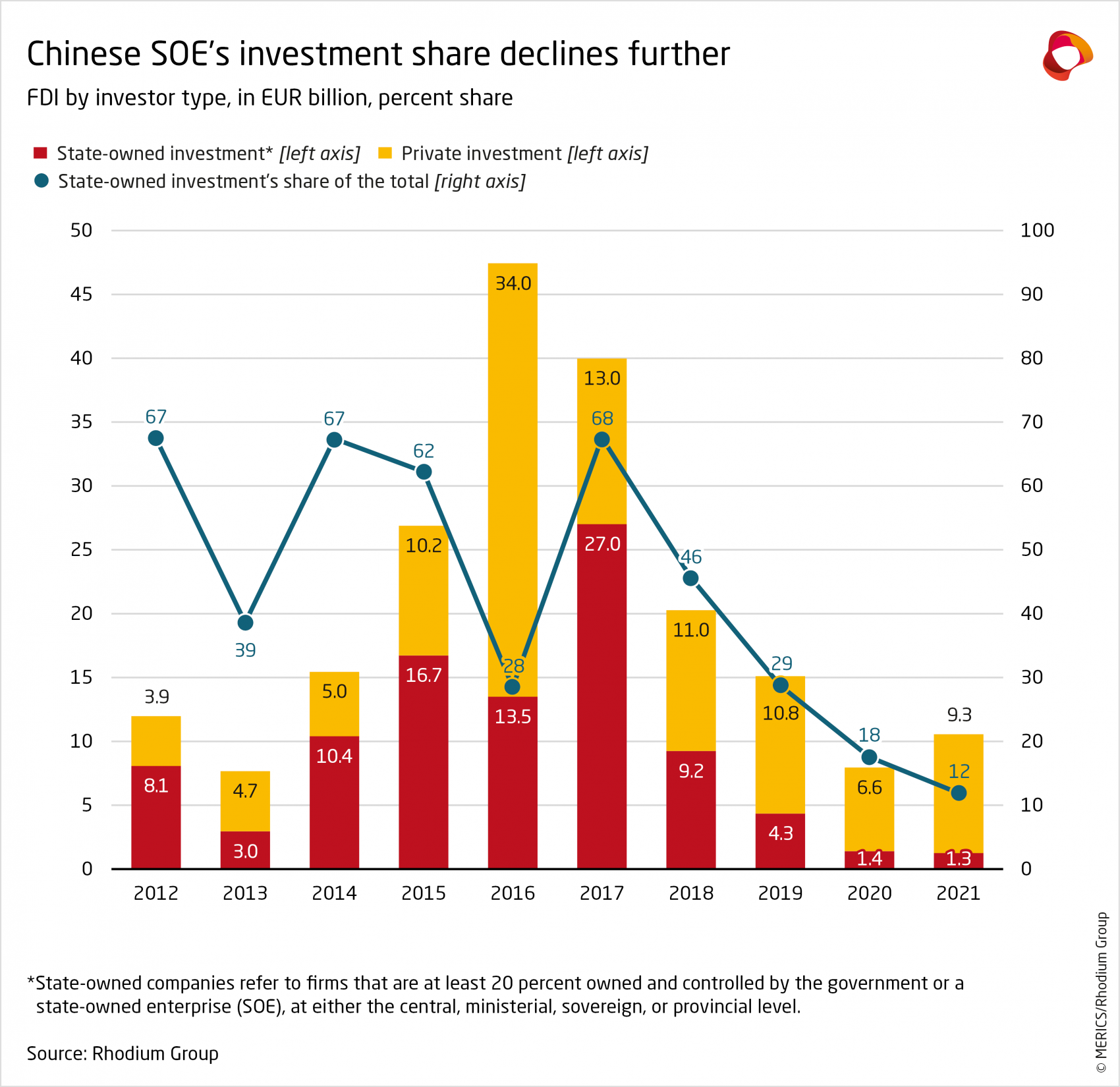 2.4 Bulk of investment concentrated on consumer goods and automotive

In terms of sectors, the Hillhouse Capital deal pushed consumer products and services (EUR 3.8 billion) to the top, with 36 percent of the total. Automotive (EUR 2.4 billion) came in second, accounting for 23 percent of all Chinese investments.

While Automotive has long been a key sector for Chinese investment in Europe, this year was different in two ways: most of that investment took the form of greenfield projects, instead of acquisitions as in previous years; and most of that investment went to support the new energy vehicle industry, via battery factories (instead of investments in traditional internal combustion engine technologies). The trend could continue next year. According to news reports, CATL is scouting locations for a second European battery plant, worth EUR 2 billion, in Poland. CATL’s first one in Germany is to commence production in 2022.

Chinese companies also displayed strong interest in health, pharmaceutical and biotech, with EUR 961 million in investment in 2021, and ICT, with EUR 941 million. The two sectors accounted for 9 and 8 percent of total investment respectively. Major deals included Shenzhen Mindray’s acquisition of medical device maker Hytest Invest for EUR 560 million as well as Huawei’s and ByteDance’s continued investment in greenfield projects in Ireland and the UK.

3.1 Greenfield becomes a major form of Chinese investment in Europe

This increase was driven by a handful of large deals in automotive and ICT: SVOLT Energy’s and CATL’s EV battery plants in Germany, Envision AESC’s EV battery plants in France and the UK, ByteDance’s data center in Ireland and Huawei’s optoelectronics R&D center in the UK. As such, it does not yet constitute a solid, multi-year trend across many players or sectors. Yet, with now over a third of China’s FDI to Europe going to greenfield projects, China’s footprint in Europe is now looking quite different from the past.

This shift towards greenfield investment is likely shaped by several factors:

The rise in Chinese greenfield investment in Europe is a reflection of global trends. China’s global footprint has shifted more towards greenfield projects over the past couple of years.

In short, Chinese firms are now investing heavily in global production sites, compared to their historical focus on asset and company acquisitions.

2021 also saw pronounced growth in Chinese venture capital investment in Europe, in line with Europe’s total VC investment growth, which increased by 120 percent to just over EUR 100 billion. Levels of Chinese VC investment more than doubled in 2021, to EUR 1.2 billion. These remain way below levels of China’s VC investment in the United States, which stood at EUR 2.9 billion in 2021, but marked a sharp uptick.

These investments were strongly concentrated on a handful of countries. Half went to Germany (EUR 597 million), followed by the UK (EUR 230 million) and then Sweden (EUR 121 million).

The rise in China’s VC investment in Europe might finally be explained by comparatively low levels of scrutiny around VC flows in Europe (compared to M&A and greenfield FDI). In contrast to large acquisitions, small VC deals might fly under the radar due to the speed of deal making, level of technological complexity, and often limited shareholding taken (below 10 percent).

The United States started screening certain VC investments in 2018 and, in 2020, India restricted incoming Chinese investment, including venture capital. The EU’s investment screening regulation allows member states to screen below the 10 percent threshold, but many member states still need to implement such guidance into their own mechanism and screening practices. 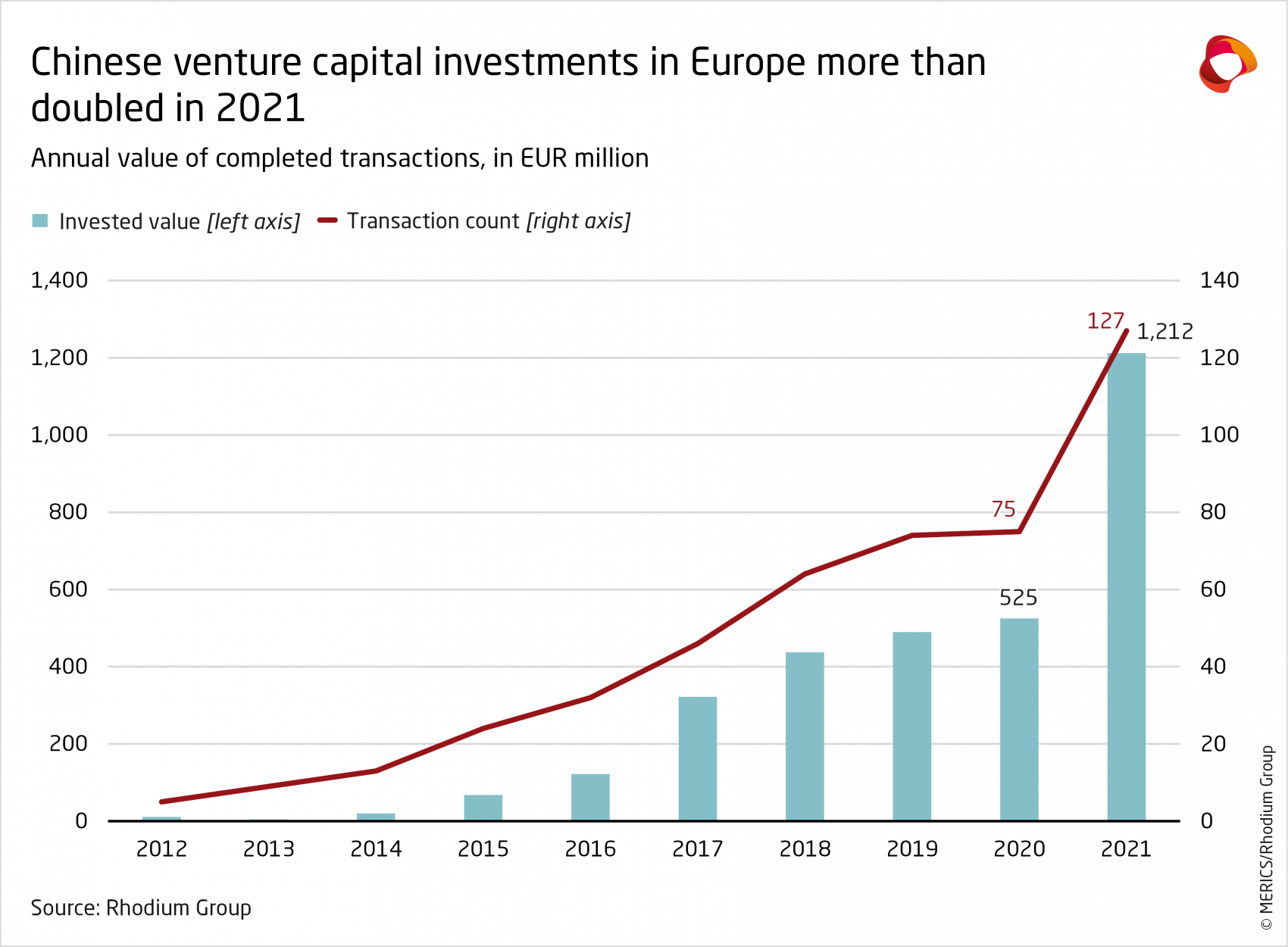 From October 2020 to June 2021, as part of their duties under the new EU FDI regulation, 11 member states notified 265 transactions as potentially problematic to the EU, of which eight percent concerned investors ultimately from China.

Most publicly known cases of reviewed Chinese investments focused on critical infrastructure and strategic dual-use technologies (see exhibit 9). Several screenings involved acquisitions of semiconductors producers, an area in which China wants to become independent from foreign suppliers. Italy blocked two acquisitions in the sector. At the time of writing, the acquisition of Elmos Semiconductors production lines by SAI MicroElectronics in Germany and the takeover of Newport Wafer Fab by Chinese-owned Nexperia in the UK were still under review.

Among highly publicized cases in 2021 was the review by the Italian government of the 2018 takeover of Italian drone maker Alpi Aviation. The case is a good illustration of the importance, yet also the limitations, of investment screening mechanisms. Alpi Aviation was acquired, through several intermediaries, by a consortium made up of CRRC and an investment group controlled by the Wuxi city government. At the time of the transactions, the buyers failed to notify the Italian authorities despite legal requirements to do so.

The case came under public scrutiny in September 2021, amidst news that the government was probing the deal over an alleged breach of the rules on sales of military materials. The sensitive nature of the transaction highlights the usefulness of screening mechanisms to avoid dual-use knowledge being transferred across borders. However, screening mechanisms might not always be effective in catching smaller deals like the Alpi one, which can end up escaping regulatory scrutiny.

4. Outlook: Era of massive Chinese investment seems over for now

In 2022, we expect China’s FDI flows into the EU to remain at the current low levels. Existing constraints on Chinese outbound investments remain in place, and new ones have emerged. This does not preclude the possibility of another investment uptick in 2022: current low investment volumes make it difficult to identify clear trends, and any single large deal could translate into sizeable changes in China’s investment level or structure (by country, sector, ownership or type). The era of massive Chinese investment in Europe seems over for now.

The most important factors that will shape Chinese investment flows to Europe in 2022 are: 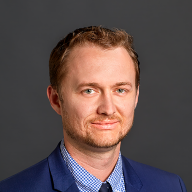