The latest leaders’ meeting and trajectory of the past summits shows that EU-China relations are diverging, says Grzegorz Stec. As the old ways of engagement are outdated, Brussels needs to rethink whether the model of its relationship with Beijing is sustainable.

EU-China summits used to be the format in which the two sides set their cooperation agenda and tried to jointly address differences. But now they are increasingly becoming a platform for stating opposing positions and, at best, practicing damage control and maintaining some dialogue. As China becomes more assertive and authoritarian and the EU more geopolitically forthright and willing to use its policy tools, the two sides are less likely to make concessions to one another and these meetings are ever less likely to produce major agreement.

The EU-China summit on April 1, 2022 was exceptional given the geopolitical stakes amid the Russian invasion of Ukraine, but its outcome was an expression of this larger trend. There was no shortage of unflattering descriptions about the virtual meeting’s tone and result. EU leaders referred to it as a “war-time summit” and “not business as usual” and EU High Representative Josep Borrell described it as a “dialogue of the deaf”, with the EU and China being unable to have a constructive discussion either on Ukraine or bilateral tensions. Both sides failed to agree on a joint statement.

But at least the EU and China agreed to keep talking. The two sides pledged to restart their bilateral dialogue on human rights and prepared the ground for a series of upcoming high-level dialogues, formats which bring together European Commissioners with Chinese Ministers or other relevant counterparts to discuss topical issues.

Still, the EU used the summit to draw lines in the sand on Russia’s war and key bilateral issues.

EU leaders issued an only thinly veiled warning that any practical support for Moscow would lead to significant economic costs for China. They pointed to the volume of EU-China trade (around six times that of trade between China and Russia) and the importance of the EU as a technology supplier to China (implying that Beijing should not take access to the European market for granted).

The goal is to change Beijing’s strategic calculus regarding its support for Moscow, especially in light of the economic pressure in China amid the covid19-related disruptions and the desire for stability in the runup to the 20th National Congress of the CCP this fall. However, the EU’s unity and resolve about pursuing this course remains to be tested. EU member states agreeing on potential measures to target Beijing would be a politically more challenging feat than in the case of Russia.

Chinese leaders seemed little impressed and were not interested in any substantial discussion about Russia’s invasion of Ukraine. The Chinese readout of President Xi Jinping’s points were released just 15 minutes into his hour-long meeting with EU leaders. China reiterated the talking points from previous exchanges with European and American leaders and would not commit to any new actions.

A day after the summit, Beijing said it did not see itself as a “related party on the crisis in Ukraine” and would maintain “normal trade with any other country.” But there are some indications that it might still be dissuaded from expanding its support for Moscow and interfering with the sanctions. Chinese state-owned oil refineries were recently reported to be reluctant to agree new Russian oil contracts, despite considerable discounts being offered by the vendors.

Overshadowed by geopolitical developments, the summit also saw no meaningful discussion of long-standing obstacles to the relationship – China’s economic coercion of Lithuania, which disrupts the functioning of the bloc’s single market, the mutual EU-China sanctions of March 2021, European concerns over human and labor rights in Xinjiang and other regions, and the issue of market access for EU companies in China.

Nevertheless, the EU said it remained open to cooperating with Beijing on global health issues – including the export of mRNA vaccines to China – and on climate affairs. While not necessarily subscribing to the Chinese depiction of EU-China relations as a force to “offset uncertainties in the international landscape,” the EU sees the need to leave room for practical measures to contain excessive global economic spillovers of the war in Ukraine, including on food and energy security.

The summit’s limited practical outcomes and political tensions are symbolic of the gradual decline of EU-China relations and increasingly challenging EU-China summits in recent years. For both sides, the exchanges have become both more important and more challenging. The summits remain an important format for direct communication between leaders. But they are increasingly also becoming a platform for stating positions and delineating differences, rather than a forum in which to engage in constructive dialogue, resolve differences and define joint initiatives. 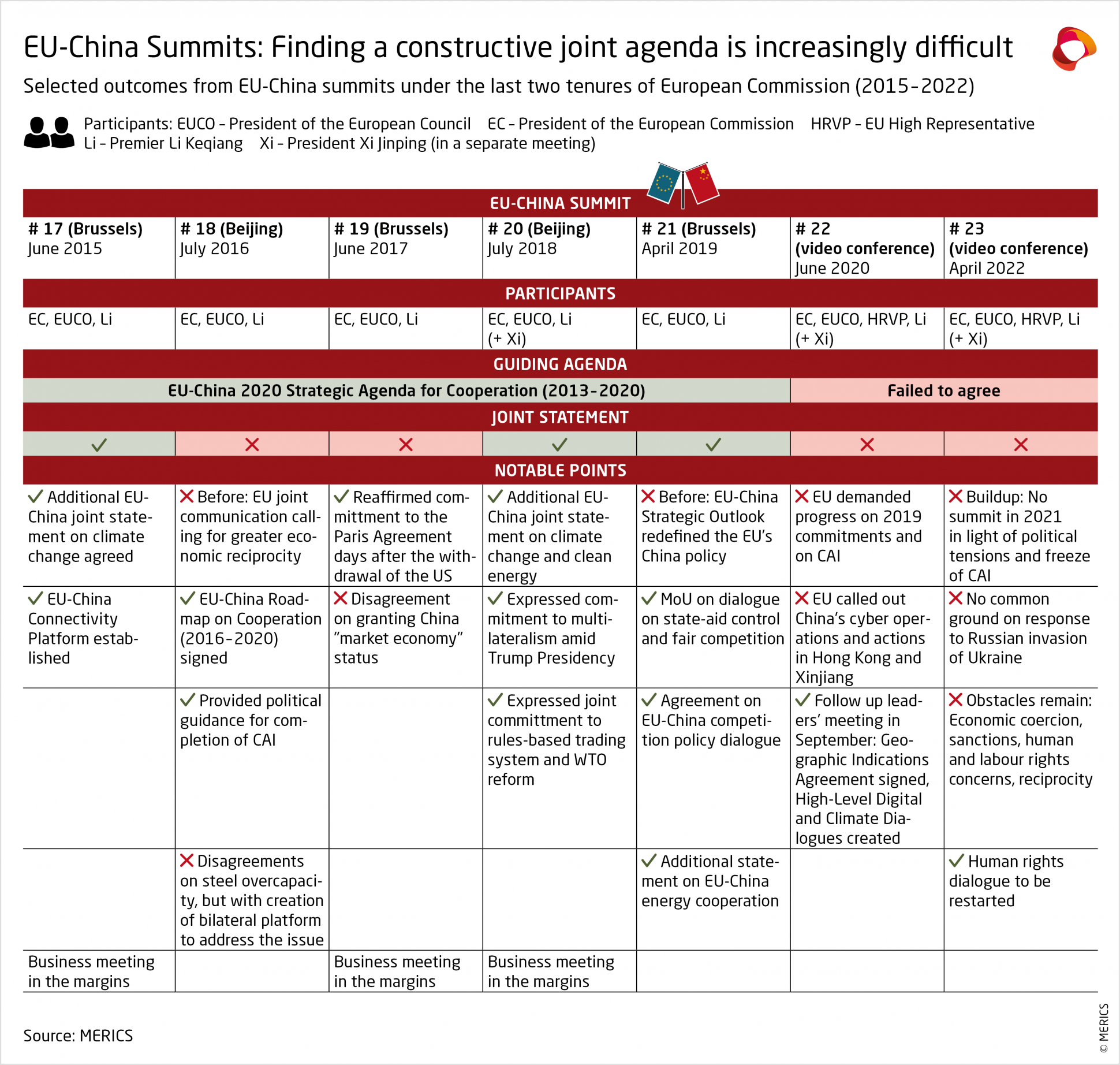 At least both sides take each other seriously enough to invest in fairly regular dialogue of the most senior leadership, including President Xi Jinping. But both the EU and China are finding it increasingly hard or simply unacceptable to compartmentalize issues vital to each of them in order to agree joint summit statements. In 2016 and 2017, there were no joint statements in light of disagreements about steel-production overcapacity and whether China should be granted market-economy status. In 2020 and 2022, a lack of progress on previously agreed points, bilateral sanctions, China’s actions in Hong Kong and Xinjiang, its economic coercion of Lithuania and Beijing’s position on Russia’s war in Ukraine showed up deeply rooted tensions linked to systemic rivalry.

EU-China relations as they stand are beset by a lack of a joint vision to develop a constructive agenda. After the timeframe of the EU-China 2020 Strategic Agenda for Cooperation finished, the two sides failed to agree on the Agenda 2025 framework as a follow-up. Talks were initially delayed by CAI negotiations and later got derailed by the exchange of sanctions in April 2021, which limited exchanges between Brussels and Beijing, a situation further exacerbated by Covid19-induced limitations to direct communication.

Beijing seems stuck in its old ways of managing its relationship with the EU. It has not developed a response to the changing dynamics of EU-China relations and Brussels’ quest to become a more geopolitical player – aside from selective rhetorical endorsement of efforts that fit Beijing’s objectives. Beijing keeps betting that the allure of the Chinese market and the need for joint action on climate change will keep the relationship steady. Eight years ago, Xi proposed China and Europe “foster a China-EU partnership for peace, growth, reform and civilization,” China’s recent summit readout stated, before adding “China’s vision remains unchanged.”

European perceptions of China, on the other hand, have shifted recently. The EU is now stressing economic competition and systemic rivalry with Beijing, while concentrating on defensive policy measures that could mitigate the growing list of concerns the EU has vis-à-vis China.

Looking at the summits of the past few years, the trend becomes clear. EU-China relations are diverging. The tensions are growing, while the ideas to find solutions are scarce, and political will to do it is declining.

The path ahead: the EU needs to reassess its China goals

The “war-time summit” has put geopolitical and security issues squarely on the EU-China agenda. Beijing’s narrative on the EU-China relationship was always that the China and the EU had “no fundamental conflict of interest – referring to an absence of problems related to security or strategic contest. But this is changing as Beijing supports Russia’s demands for a restructuring of Europe’s security architecture and the EU develops relations in the Indo-Pacific – notably also in security and defense domains, as outlined by its recent Strategic Compass and the Indo-Pacific Strategy.

There is still room for cooperation, the EU and China are on course for confrontation, but not locked on this path. Stabilizing the relationship would, however, require returning to discussions about a more realistic agenda for dialogue to create a sense of constructive direction in the EU-China relations. In the current geopolitical situation, with key bilateral obstacles unresolved and political will and strategic trust lacking, such stabilization will be truly hard to achieve.

But the EU would need to assess what kind of stabilization it wants and why. The EU should consider revisiting its 2019 EU-China Strategic Outlook. Not with the goal of revising its multifaceted framework, but to define concrete goals for its relation with Beijing and assign them clear priority. That would help to chart the course ahead for one side, at least.

Recent summit outcomes indicate the need for the EU to ask itself a weighty question – if the current model of EU-China relations is not sustainable, what kind of a realistically achievable model can we strive for?