Focus Topic: The PLA’s Covid-19 diplomacy, a peek behind the mask

Much has been written about China’s “mask diplomacy” during the Covid-19 pandemic. As the epicenter of the pandemic shifted from China to the rest of the world, China’s government sent planeloads of masks and medical supplies to hard-hit countries around the world. Beijing’s “mask diplomacy” sought to bolster China’s image as a responsible global power and was widely perceived as part of Beijing’s attempt to control the narrative around the pandemic and distract from its initial cover-up. But while all the attention focused on the Chinese government’s actions, the People’s Liberation Army (PLA) was carrying out its own, much quieter version of mask diplomacy.

According to MERICS data, in the three months between March 13 and June 19, the PLA sent military planes full of medical material to 46 countries. The material, which mostly consisted of masks and personal protective equipment (PPE), was invariably donated to the recipient countries’ armed forces or defense ministries. The PLA also set up video conferences with foreign militaries to share its experiences of fighting the Covid-19 outbreak and strengthen military-to-military relations.

At first glance, the Chinese government’s mask diplomacy campaign and the PLA’s look remarkably similar. However, a number of differences suggest there were different goals and strategies at play.

The PLA’s approach was more strategic

First, they targeted different groups of countries. Government “mask diplomacy” targeted many developed countries such as Japan, Germany, Italy or Spain, as did China’s private sector’s sales and donations. The PLA’s outreach, on the other hand, was directed towards developing countries in Asia, the Middle East and Africa, as well as some in Eastern Europe and Latin America. The majority of these are strategically important for China’s – and the PLA’s – global ambitions. The list includes a large number of countries along the Belt and Road Initiative – President Xi Jinping’s signature foreign policy project –, together with states whose governments are sympathetic to Beijing, or may be persuaded to become so. The second group is particularly important for China’s leadership when it comes to sensitive votes in multilateral forums or international organizations, such as the European Union or the United Nations.

A second difference was the level of publicity the two campaigns received. Publicity was the hallmark of the Chinese government’s mask diplomacy in Europe and elsewhere; it was strongly promoted in the media and Chinese officials took to social media channels like Twitter to trumpet the aid deliveries. They used the donations to promote China as a model for handling the epidemic, in a bid to project soft power and shape the narrative. They portrayed China as a country that had successfully controlled its own outbreak and was behaving as a responsible power by helping other nations. Meanwhile, the PLA’s efforts were much quieter. Announcements were often limited to short pieces, largely devoid of detail, in the armed forces’ newspaper – the PLA Daily – and so have gone largely unnoticed.

These differences in approach suggest a different goal behind the Chinese military’s mask diplomacy campaign. Beijing’s donations were meant to change the Covid-19 narrative by garnering positive international media attention and praise for China’s handling of the coronavirus outbreak, thus bolstering Beijing’s self-styled image as a responsible global power, whereas the PLA’s diplomatic efforts seem more tightly focused and strategic.

The aim was to use medical donations as defense diplomacy tools

Although the quantity of PLA-donated masks or PPE was rarely stated, we can see from the instances when quantities were published that this was clearly not a numbers game. The number of face masks delivered to various European countries through government-to-government donations was in the hundreds of thousands, or even the millions. The PLA’s donations seem to have been much smaller. In one of the only cases for which numbers were published, the PLA’s donation to Zimbabwe’s military consisted of only 62,000 masks and 19,000 pieces of PPE.

The PLA’s donations seem to have been mostly symbolic. The aim was not to solve shortages of medical material in hard-hit countries, but rather to use donations as defense diplomacy tools. Given the lack of publicity surrounding these efforts, it also seems clear that the goal was not to restore or improve China’s image with the general public and civil society in recipient countries. Instead, it was about generating goodwill and securing buy-in among political elites and, especially, their armed forces. The military are powerful political actors in many of the states that received PLA donations.

By providing much-needed donations of medical material to foreign militaries, Beijing hopes to strengthen military-to-military ties and to portray itself as an essential and reliable partner in times of crisis, unlike the United States or Europe. While government-to-government Covid-19 aid presented China as a benevolent superpower, the PLA’s donations were aimed at building relationships with defense elites able to support China’s hoped-for global expansion.

This effort has particularly important implications in Southeast Asia, given China’s more aggressive behavior in the Asia-Pacific region in recent months. The PLA has been accused of taking advantage of other countries’ distraction with Covid-19 to engage in increasingly provocative behavior that has included regular military maneuvers and flyovers around Taiwan, and deployments in the disputed areas of the East and South China Seas. The Chinese military has been busy pursuing Beijing’s geopolitical goals while other countries’ armed forces announced they would halt their activities in order to focus on fighting the pandemic.

China’s stated ambition is to become a global power with a strong military that can fight and win wars by 2049. Against the background of worsening relations with the US, Beijing has clearly decided to invest in defense diplomacy, and the Covid-19 pandemic has provided China’s military with a perfect opportunity. The PLA’s donations are likely to have gone down much better in recipient countries than the government’s mask diplomacy which was often accompanied by moralizing undertones. Although small, the donations will have set the stage for closer ties with Beijing. 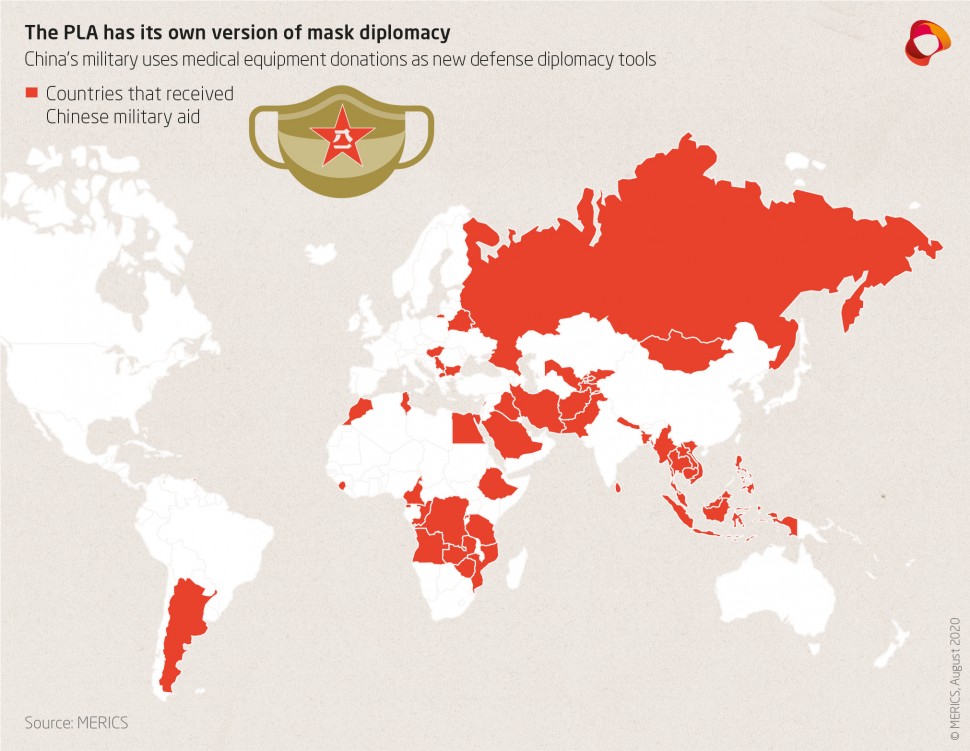 Military Operations Other Than War

Influence in the UN