As expected, the Chinese leadership has used this year’s National People’s Congress to present itself as self-confident and assertive in face of difficult conditions internationally. To achieve the target of “qualitative growth” and independent technological innovation, China is investing massively in research and development in the coming years. An annual increase of seven percent is planned, as Premier Li Keqiang announced in the government’s work report.

Delegates at the People's Congress also agreed to increase military spending by 6.8 percent. The issue of security remains at the forefront for China's government – not least because of the ongoing tensions with the United States. State and party leader Xi Jinping described the country’s security situation as “unstable and uncertain” at a meeting with senior army representatives. The entire army should cooperate in building up its capabilities and combat readiness, he said.

As expected, the National People’s Congress did not set a clear growth target, but it did name “more than six percent” as the goal. More is now known about the 14th Five-Year Plan. In terms of climate, China showed itself less “green” than observers had hoped. For example, the decision-makers did not set emission limits or name stricter measures to increase the energy efficiency of the economy. If China is to achieve the declared goal of CO2 neutrality by 2060, much bigger concrete steps will be needed. The fact that energy security has been given higher priority will also be an obstacle to a rapid energy transition. 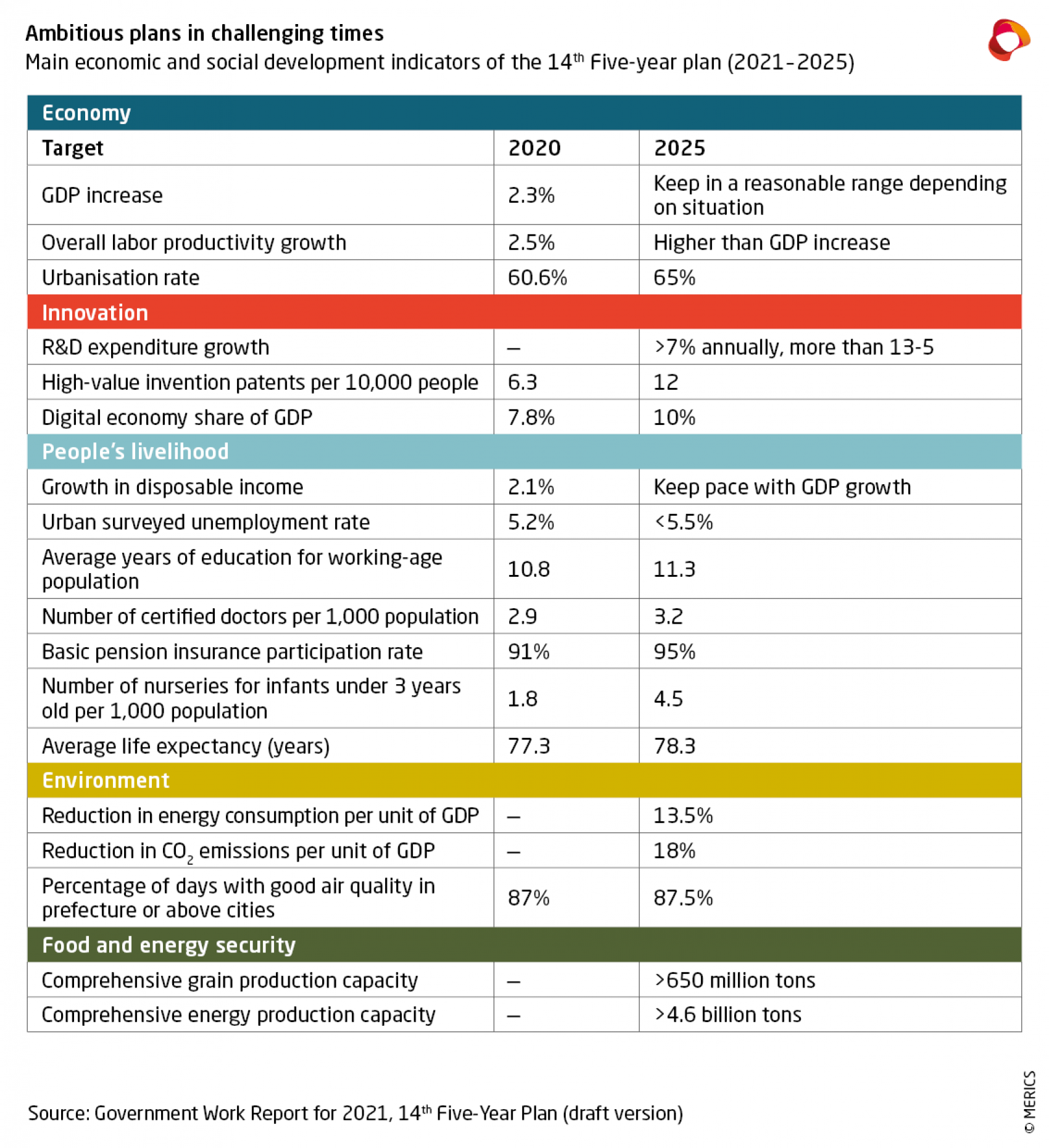 In its inward orientation, the Five-Year Plan reflects the fact that China's leadership is very much aware of the major challenges. Even after the officially successful end of the campaign to reduce poverty, rising inequality remains an urgent problem. Beijing faces the huge task of stabilizing the social security system and supporting rural regions.

With the new Five-Year Plan, China intends to redirect investment to smaller cities and rural areas  to narrow the gap between wealthy and poor regions and to make poverty reduction sustainable. In view of the intense discussions within China on food security, modernizing agriculture is also an urgent task.

To support the domestic base, China's leadership faces a difficult balancing act – on the one hand, converting industry from quantitative to high-quality production, on the other hand, ensuring basic needs are met in poorer regions. The investment needed is likely to be difficult, even for a country like China with its high foreign exchange reserves.

After the successful fight against the Covid-19 pandemic, Beijing is formulating a worrying approach to dealing with “contradictions” in society in its Five-Year Plan. Further investment in the security apparatus is just as much a part of this as the merging of security agencies and public bodies, the expansion of digital surveillance, and political campaigns to mobilize the masses. In difficult domestic and foreign policy times, control remains the order of the day for Xi's leadership.

China’s main targets for 2021 in numbers: