Russia’s war on Ukraine is a headache for China

Few experts in China believed that Russia would launch a full-scale invasion of Ukraine. Washington’s recent warnings were largely dismissed as anti-Russian propaganda. So, when Russia did launch its all-out attack, Chinese experts were at least as stunned as many Europeans. However, unlike in the West, widespread condemnation did not follow. While Beijing’s censorship apparatus certainly played a part in this, reactions in China have been more divided than in the West. Broadly speaking, there are the apologists – pro-Russian, anti-American and more prone to warmongering – and the moderates – more critical of the Russian regime and more averse to violence. Both camps, however, generally agree that the West is at least partly to blame for the outbreak of the war, and both do not question (at least not publicly) the importance of preserving strong Sino-Russian ties. 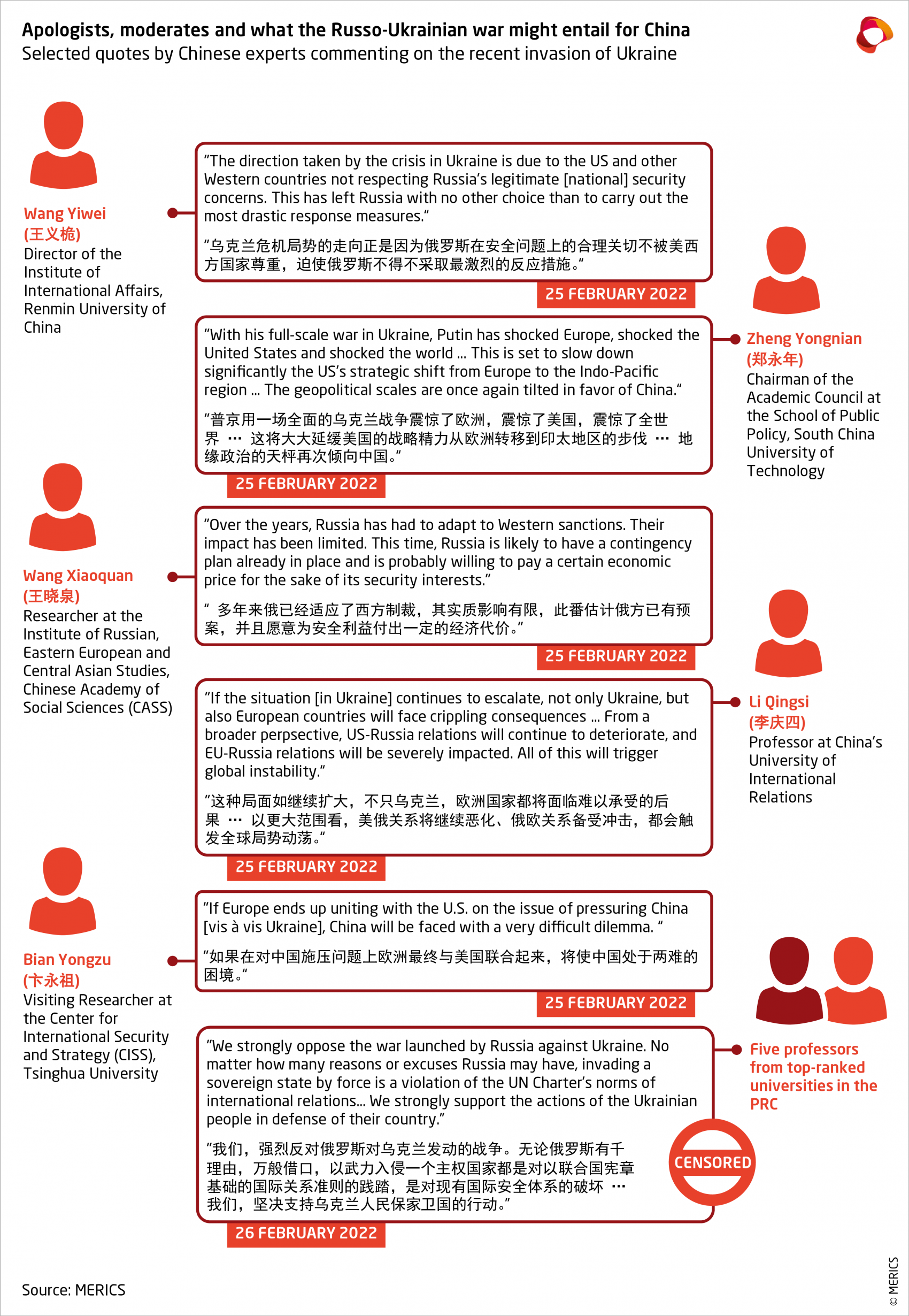 Chinese apologists and moderates have long criticized NATO and the European Union for their perceived aggressive eastward expansion. This, they argue, has been carried out without sufficient regard for Moscow’s national security interests and was bound to result in conflict. Both sides express some sympathy towards Russia’s grievances. Like China, Russia has seen its geopolitical space gradually constrained (地缘政治空间的挤压) by the West. It, too, has had to suffer criticism and lecturing by the western world. Russian resentment should have been better addressed, they say.

The apologists and the moderates

But apologists go a step further. They argue that Russia had no choice but to take up arms. Commenting on Putin’s decision to invade Ukraine, Shen Yi, a professor at Fudan University, writes that Russia had been cornered and had no alternative other than to fight back (必须绝地反击). Such views are common in China and are not just the product of Beijing’s propaganda machine. More bellicose tendencies are also discernible among some apologists and lay commentators who have called on Beijing to learn from the Russo-Ukrainian conflict. They want China to use similar tactics to settle its disputes over Taiwan and the South China Sea.

On the opposite side of the spectrum are those who have denounced Putin’s recent moves and expressed their support for the Ukrainian people. But such overt comments are tracked by China’s censors and thus remain rare. More common are the occasional jabs at, and palpable irritation with, Moscow’s tendency towards “adventurism”, “strongman politics” and “zero-sum thinking”. Russia is “reluctant to accept the reality that its international status is declining”, write Han Lu and Liu Feitao from the China Institute of International Studies (CIIS).

Moscow is evidently an awkward partner for Beijing and many moderates worry about the impact the relationship will have on China’s international reputation. Even some apologists believe that Russia’s invasion of Ukraine was a strategic mistake. So far, however, no one in China has dared call on their government to distance itself from Moscow. Many, like Cao Wei, a professor at China’s University of International Relations, are aware that “the foundations of this seemingly good relationship may not be as strong as they first appear.” Beijing is now taking extra care not to damage them. After all, as Zhang Hong, a researcher at the Chinese Academy of Social Sciences (CASS), writes, “You can change friends, not neighbours. China and Russia as neighbouring countries have to get along”.

According to many of these analysts, Russia remains the only “pole” in China’s ideal multipolar world that can both act as a counterbalance to the US and side with Beijing when required. Other potential “poles” such as India or Japan have already shifted too far westwards, they say. Still, the Chinese remain hopeful that the EU's pursuit of strategic autonomy could help curb the influence of the US and become a "breakthrough point for China's diplomacy" (中国外交的突破点). So, as one professor from Nanjing University recently remarked, the Russo-Ukrainian war has created a new conundrum for Beijing — how to preserve its ties with Moscow without damaging its relations with the EU. The longer and deadlier the war in Ukraine becomes, the more of a headache this will be for Beijing.

That’s the rough value of seven infrastructure projects that France and China agreed to jointly pursue under a new third-party market cooperation. The first intergovernmental mechanism of this kind established by China, the initiative was discussed by Presidents Emmanuel Macron and Xi Jinping during a call on February 16. The details remain unclear, but China’s National Development and Reform Commission stated the projects would be located in Africa, Southeast Asia, and Central and Eastern Europe – and include infrastructure and green investments.

The amount seems modest when compared to EU plans to invest EUR 300 billion in the Global Gateway initiative. With the EU promoting its initiative at EU-African Union Summit and EU-Indo-Pacific Forum, the timing of France’s bilateral move seems unfortunate. But the EU should not exclude developmental cooperation with China if its standards are respected.

EU27 foreign ministers and 30 of their counterparts from the Indo-Pacific region gathered for the EU-Indo-Pacific Forum in Paris on February 22. While relations with China were not officially on the agenda, the forum’s outcome suggests EU-China tensions in the region could rise further.

Quick take: The EU’s expanding engagement with Indo-Pacific partners on transparent connectivity and human-centric digital policies is not in China’s interest. But the EU’s ambition to expand defense cooperation with Indo-Pacific partners is likely to have stirred the most attention in Beijing. French and German maritime operations in the region have already caused diplomatic tensions with Beijing – and now they may become more frequent. While the EU is geographically distant and its ability to project hard power in the Indo-Pacific still limited, Beijing will surely be more mindful of the bloc’s defense partnerships after its historic decision to provide lethal military equipment in support of Ukraine.

Quick take: China appears through the report as central to the EU’s thinking about economic security. The “weaponization” of strategic dependencies by Beijing, demonstrated on an unprecedented scale towards Lithuania over the past months, has anything but strengthened a trend already clear in the 2021 report. The long list of proactive actions taken by the EU and member states since last year demonstrates a change of paradigm on both dependency and industrial policy. And the events in Ukraine are only likely to accelerate it. China, the actor likely the most affected by those industrial ambitions, has yet to provide an official stance towards the EU’s efforts. Being subject of an increasing number of the EU trade defense sanctions, it seems the Sino-European trade relations are set for another bumpy year.

The EU-China summit is still expected to take place on April 1. The two sides are expected to discuss sanctions exchanged by both sides and Russia’s invasion of Ukraine.

EU High Representative Josep Borrell and Chinese Minister of Foreign Affairs Wang Yi talked by phone on February 25. The European side highlighted that Borrell had called on Beijing to influence Moscow amid its invasion of Ukraine, while the Chinese side said Wang addressed the ongoing China-Lithuania spat.

Russia will not be able to substitute its gas exports to the EU market with an increase of exports to China in the short term. The EU currently receives 83 percent of Gazprom’s gas exports, writes Alicia Garcia-Herrero.

Chinese financial institutions appear to be abiding by the sanctions against Russia. Several state-controlled banks are reportedly limiting the financing of purchases of Russian raw materials.

Chinese electric-vehicles industry supplier Baolong is set to build a EUR 14.1 million plant in Hungary with the financial participation of the Hungarian government.

Why China isn’t backing away from alignment with Russia

Battered in Russia, companies need to be more transparent about risks in China