How China views the EU amid the Russia-Ukraine war: Contradictions of transatlantic relations and strategic autonomy

Since the beginning of Russia’s invasion of Ukraine, Chinese experts on European affairs have been debating its impact on the EU and what that means for EU-China relations.

As the invasion enters its sixth month, the Chinese expert community seems to be developing a consensus that the war exacerbates the underlying contradiction between the EU’s strategic autonomy ambitions and transatlantic relations with implications for China. 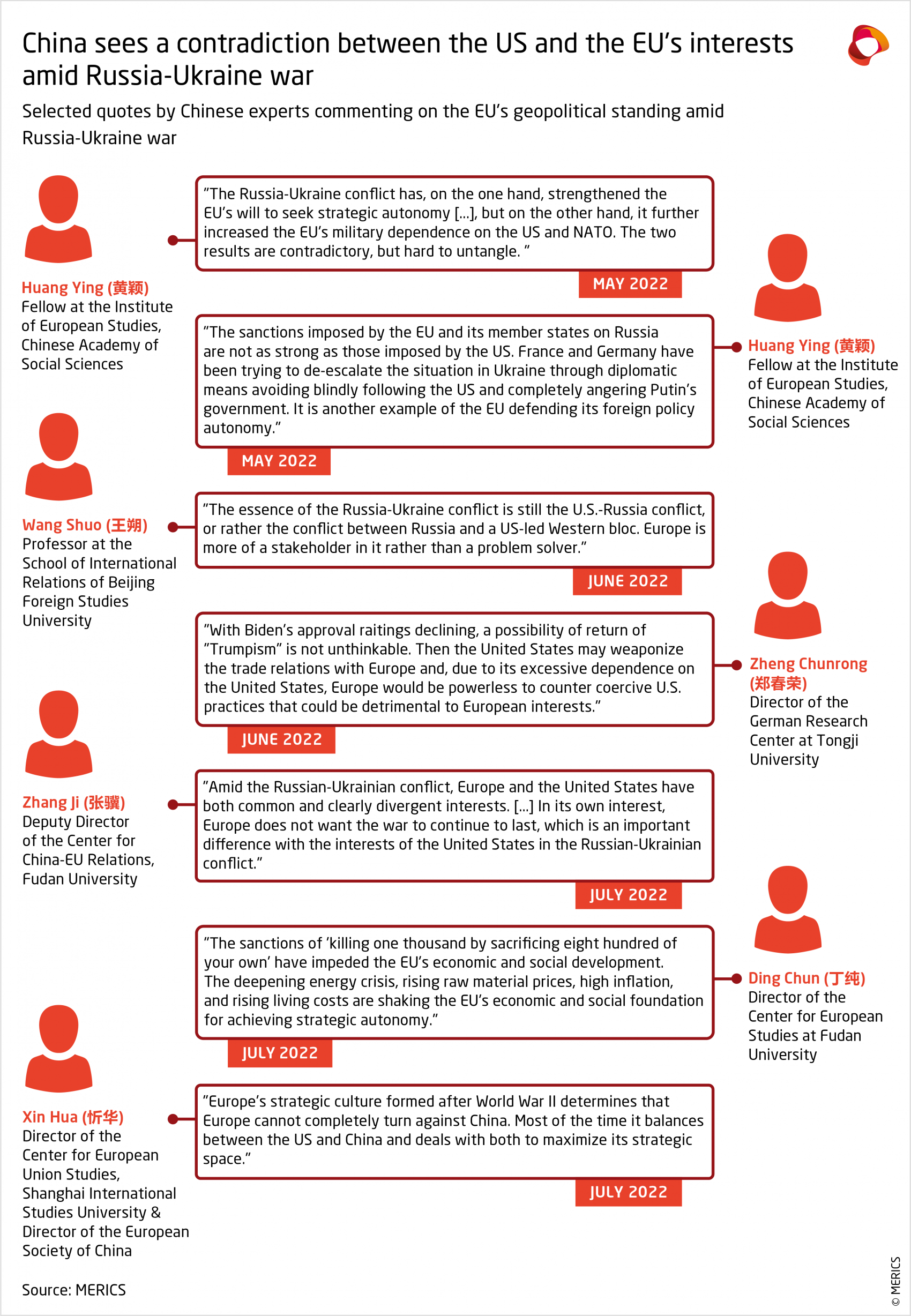 Strategic autonomy: Contradiction of power and will

China’s interest in the concept of strategic autonomy is not new. Beijing has repeatedly expressed support for it or rather, as we discussed back in April 2021, for a “correct understanding of strategic autonomy.” It would mean the EU escaping the “state of total dependence on the United States” (对美国的全面依赖状态) and pursuing a “third way” (第三条道路) amid US-China tensions without challenging China’s interests.

Now, most of the Chinese researchers point to the fallout from the invasion as having a contradictory impact on the EU’s approach to strategic autonomy (see Quote 1).

On the one hand, they argue, the fallout from the conflict exposed the EU’s weakness and its dependence on the United States in multiple regards. These include military dependence on NATO or political dependence with suggestions that Washington pushed the EU to ramp up its sanctions on Russia. For instance, Huang Ying of the Chinese Academy of Social Sciences invokes — primarily French and German — efforts to mediate with Russia as an example of the preferred approach (see Quote 2). This assessment ties to the wider narrative that the war is supposedly a conflict between the US-controlled West and Russia, prompted by NATO’s expansion (see Quote 3).

On the other hand, the Chinese experts believe that the exposure of these dependencies intensifies the EU’s desire to develop its strategic autonomy and mobilize the bloc to act.  Still, they generally remain skeptical about the prospects of an EU that can achieve strategic autonomy. For instance, three prominent experts describe “four curses” (四重魔咒) that impede the EU’s potential to achieve strategic autonomy: limited ideological clarity about strategic autonomy’s objective; decreasing economic and limited security capabilities; reliance on the United States; and internal divisions.

The EU’s global standing and its relationship with China as a rising power, the logic follows, is to stem from how the bloc approaches the contradiction between its dependence on the US and its will to develop its own capabilities.

That is where the impact of the war on transatlantic relations fits into the picture. The Chinese analysts note the recent tightening of transatlantic ties but are skeptical about the level of alignment of interest between the US and EU regarding the war in Ukraine (see Quote 4). The US is supposedly determined to prolong combat given limited costs and considerable geopolitical opportunity of rallying anti-Russia and anti-China coalitions as well as benefits from arms sales. Whereas the core European interest is described as seeing an end to the conflict as soon as possible given its devastating effect on energy supplies and prices, and their resulting knock-on economic and social impact.

Some go so far as to suggest that the EU is walking into a trap of its own making, pushed forward by the US. The argument being that, undermined by the economic impact of the conflict, the EU will struggle to develop its strategic capabilities and therefore become locked in a state of US-dependency (see Quote 5). All the while, the next US presidential elections may result in a return of Trumpism that would further hinder the EU’s capacity to increase its autonomy (see Quote 6). The implicit expectation is that this would make the EU more of a balancing power as opposed to a committed member of US-led, China-skeptic coalitions (see Quote 7).

While acknowledging the turbulences in the EU-China relations, Chinese experts point to the continued bilateral exchanges as an example of strategic autonomy at work. Despite the tense nature of the latest EU-China summit it is also invoked as such an example by some. The impact of China’s stance on Russia’s invasion upon EU-China relations remains largely ignored.

Furthermore, when talking about the EU and its strategic autonomy, the Chinese experts still predominantly reference positions of Germany and France (with understandable interest in President Macron), far more so than that of Brussels at large or specific EU institutions.

Takeaways for the EU

Extrapolating from the position of the experts in China, the EU should be aware of three points:

The EUR 300 billion connectivity initiative launched by the European Commission promises to consolidate itself now that, according to the German business daily Handelsblatt, the project is getting a high-profile supervisory board. The board will be composed by the Foreign Ministers of the member states and “relevant commissioners”, and it will be led by the President of the Commission. The fact that Ursula von der Leyen herself will lead the effort gives the initiative a whole new level of importance. However, enthusiasm may be premature, as too much remains unclear to assess what this step will mean for the future of Global Gateway, and for the EU’s ability to compete in third countries.

Nicolas Chapuis will conclude his tenure as EU ambassador to China at the end of August and hand over the reins to Jorge Toledo Albiñana, who will take up the post starting from September. Chapuis, a veteran French diplomat and accomplished Sinologist and Chinese poetry translator, led the EU delegation in China since September 2018. Contrary to his successor, Chapuis has a lifetime’s worth of experience in working on and in China; he first visited China in 1979 before moving to Beijing for his first official diplomatic posting as a Press Attaché the following year; a first of many postings to China.

Chapuis’ time as an EU Ambassador (2018-2022) in Beijing was marked by growing contradictions in EU-China relations and attempts to bridge the expanding divide. Despite increasing tensions embodied by recognition of China as a systemic rival and economic competitor under the 2019 EU-China Strategic Outlook, the EU delegation worked to facilitate constructive engagement in the EU-China Comprehensive Agreement on Investment (CAI) negotiations, climate dialogue and Geographical Indications Agreement.

However, the space for diplomacy has been shrinking. In April 2020, the Ambassador was pressured by the Chinese MFA to remove allusions of China being the origin of COVID-19 from a China Daily op-ed prepared by the EU27 Ambassadors for the 45th anniversary of EU-China relations. Chapuis’ unilateral decision to agree to the request secured the op-ed’s release but drew criticism from the European side.

The zero-COVID policy, rise of wolf-warrior diplomacy, detention of an EU delegation employee by Chinese authorities, China-Lithuania debacle and Beijing’s tacit support for Moscow further complicated the work of EU diplomats. Amid worsening ties, several times Chapuis called on Beijing to cherish “Deng Xiaoping’s legacy” or remarked that Beijing’s constructive engagement on Russia would “go a long way to build trust”, but such messages have at times been rebuked by Chinese officials.

In his farewell remarks on July 8, Ambassador Chapuis alluded exactly to the contradictions that underpin the EU-China relations by saying: “The potential of our relations has never been so large, but the momentum of our cooperation has shrunk.” This remains visible, for instance, in China becoming the EU’s lead trade partner in goods while CAI negotiations have collapsed.  The EU's ambassador to China may be changing, but the challenges and contradictions remain unsolved. 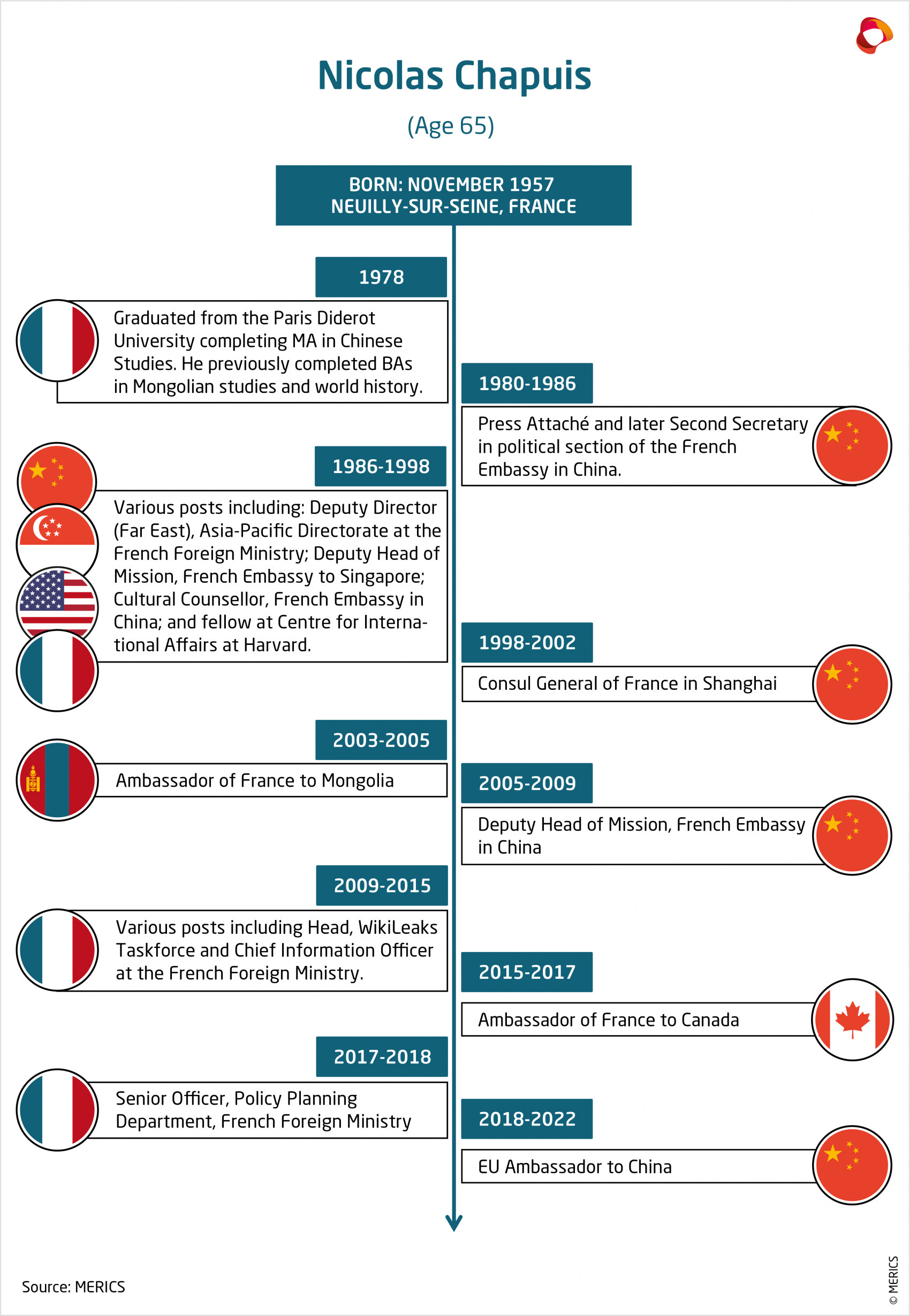 On Wednesday August 3, the speaker of the US House of Representatives, Nancy Pelosi, visited Taipei, where she met with Taiwan President Tsai Ing-wen. The visit took place despite Beijing’s threats of retaliation that materialized in the form of, military exercises, and a fresh new set of sanctions against Taiwan.  In the meantime, on the other side of the world, the Chinese Permanent Representation to the EU did not remain quiet but echoed Beijing’s concerns and threats to make sure Europeans heard them loud and clear and are aware of the dire consequences should they decide to make official visits to Taiwan in the future. In response the EU joined the other G7 members in criticizing China’s “threatening actions” while affirming commitment to status quo in the Taiwan Strait.

On July 29, Poland’s President, Andrzej Duda, held a phone call with Xi Jinping. The main topic of the conversion was the Russian invasion of Ukraine and Poland-related security concerns. Xi apparently expressed China’s readiness to collaborate to bring the conflict to a peaceful end. The friendly and cooperative tone should not surprise as China has been trying to re-engage CEE countries, especially Poland. However, a friendly phone call without follow-up actions does not fix the problems between the two.

China State Construction Engineering Corporation (CSCEC) will build an EUR 335 million motorway in Bosnia and Herzegovina. The motorway will be 33 kilometers long in ethnically Serbian majority region of Republika Srpska, and it will connect to a second 37-kilometer section, which will connect it with Serbia. The ambitious completion date for both sections is 2030. Both projects will be part of the east–west corridor that aims to connect the local capital of Republika Srpska, Banja Luka, to the Serbian capital of Belgrade, a good friend of China.

Despite the debate over the necessity to decrease dependency on China, in April, Airbus signed a framework agreement to establish the Airbus China Research Center in China and now the construction of the Airbus Lifecycle Services Center has started in Chengdu. The center will be used for storage, maintenance, upgrades, conversions, dismantling and recycling services for aircrafts.

There may be a limit to neutrality, even for Switzerland. The head of the Swiss agency in charge of implementing sanctions anticipates that Switzerland will adopt the same measure the EU will, if China invades Taiwan. Although it is not a commitment to adopt punitive measures in line with the EU, it remains a significant statement from Swiss authorities.

For the first time, China has been collaborating with other creditors – including France – to restructure the debt of Zambia, a BRI member. Previous instances had seen China alone in its debt restructuring of other BRI countries. The Zambian case is one to keep an eye on, as   it may be the first in a series of cases where the world’s largest lender, China, needs to collaborate with other countries to deal with the growing number of countries that cannot repay its loans.