As the EU gets back to work after the summer break, its looking like China will be high on the agenda this fall. The turbulent first half of 2021 set the scene, with the exchanging of sanctions, the freezing of the Comprehensive Agreement on Investment (CAI) and the intensifying of transatlantic ties. Further developments this fall will indicate the direction the EU may take on China over the course of the next year. 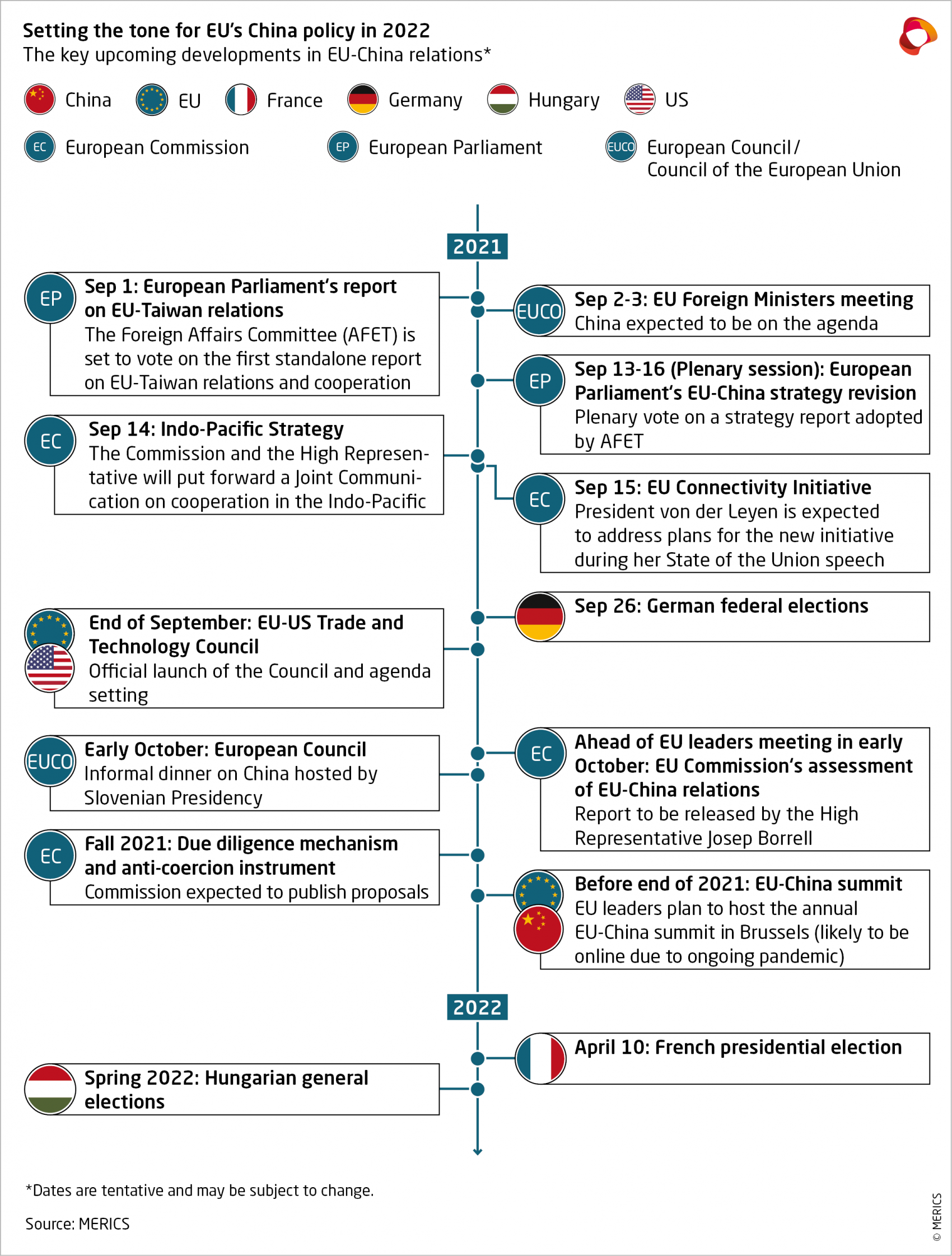 Brussels to reevaluate and gear up its China policy

EU High Representative Josep Borrell is conducting a reassessment of the EU’s China policy. His evaluation, expected to be unveiled by early October, will be similar to the one conducted in April in which the Commission found no grounds for the 2019 EU-China Strategic Outlook strategy to be updated. The assessment will likely propose changes to the EU’s China policy this time round. The inclusion of the term “systemic rivalry” is going to be an important indicator of the Commission’s resolve in the face of Beijing’s demands. Reportedly, Chinese diplomats are pushing the Commission to drop the use of term in this evaluation.

Another indication of the Commission’s direction will be the strength of legal measures included in the new due diligence mechanism and anti-coercion instrument proposals of which are set to be unveiled this fall. The two legal tools may impact the operations of European businesses in China and the EU’s way of addressing China’s economic coercion activities.

The European Parliament will hold a plenary vote on its recommendations for a new China strategy. The MEPs are expected to support a multifaceted approach to China, but also argue for a more assertive stance by calling for mandating European efforts to track Chinese disinformation and endorsing the development of a Bilateral Investment Treaty with Taiwan. The question remains here whether the Commission’s and Parliament’s assessments will increasingly converge on China or whether divergences exemplified in their differing stance on CAI will persist.

Later this year, Angela Merkel, whose position frequently impacted the EU’s China policy, will be replaced by a new chancellor. In turn, this means that the European Council will be restructured. CDU/CSU and the SPD’s leaderships do not appear to be more assertive towards China than any of their predecessors. Should the Greens, however, join the coalition, that is likely to change.

Any signs of a chance in the dynamics will come to light at the earliest at the EU’s Foreign Ministers meeting in later September and the EU leaders meeting in early October. Come Spring next year, it’s Hungary and France’s turn to elect new governments. An unlikely departure of the authoritarian government of Viktor Orbán would result in a shift of Hungarian-China policy and leave Beijing without its closest ally among European leaders. Whereas Macron has been Merkel’s partner in leading the EU’s China policy. A power shift at the Elysée could endanger the strength of the Franco-German entente.

The Council could have a stronger basis for a more cohesive European China policy should Macron retain the presidency in France, the CDU/CSU or SPD lead a coalition government in Germany and Draghi remain as the Italian Prime Minister.

The EU is looking to strengthen its position in Asia beyond China. The Commission’s release of a proposal for the EU Indo-Pacific strategy uncovers some of the details of a flexible and soft-power driven strategy. While the overall narrative aims at including China, mention of Freedom of Navigation Exercises and collaboration with “like-minded” countries reveal the strategy’s actual direction. Similarly, Von der Leyen’s State of the Union address is likely to contain clues about the EU’s commitments in the region, especially in reference to the EU’s new connectivity initiative. By developing these new strategies and initiatives, the EU will give more substance to the concept of strategic autonomy.

This fall will also bring the launch of the EU-US Trade and Technology Council, which may be the key to transatlantic cooperation. The initial meetings could form the technocratic means for transatlantic coordination on issues pertaining to China and translate the positive EU-US momentum of the first half of the year into concrete policies.

Any current momentum may be affected by the EU’s reevaluation following the US withdrawal from Afghanistan. Subsequent unsuccessful attempts by leaders to shift the American stance on the pace of withdrawal also showed the limitations of Europe’s influence. Consequently, throughout the fall European leaders may be eager to double down on the strategic autonomy agenda and become more clear-eyed about cooperation with the US, including the EU’s readiness to distance itself from China.

The agenda of the next months will reveal how committed the EU is to strategic autonomy and how will it seek to practically shape relations with Beijing and Washington. The realization coming from the EU's limited influence in the situation in Afghanistan was a hard pill to swallow. After this setback in transatlantic rapprochement, support is growing within the EU for greater autonomous capacity. Over the coming year, the bloc will likely seek better ways to protect its interests in both relations with Washington and Beijing. At the same time, it will keep developing transatlantic coordination and keep the channels of communication with China open.

If you are a MERICS member, you can access the full publication here.
Author(s)