China’s battery industry is powering up for global competition

Until recently, Tesla’s and Panasonic’s joint gigafactory in Nevada was the global benchmark for producers of lithium-ion batteries – the most common type of battery for electric vehicles (EVs). The US plant is currently capable of producing 20 gigawatt-hours (GWh) per year. In June, Tesla announced to further increase its production by setting-up a combined automobile-and-battery factory in Shanghai.

Chinese producers are rapidly catching up. China’s leading battery producers, Contemporary Amperex Technology (CATL) and Build Your Dreams (BYD), are planning to compete with their own gigafactories. If China’s expansion plans materialize, its battery manufacturing capacity would be more than triple than that of the rest of the world. 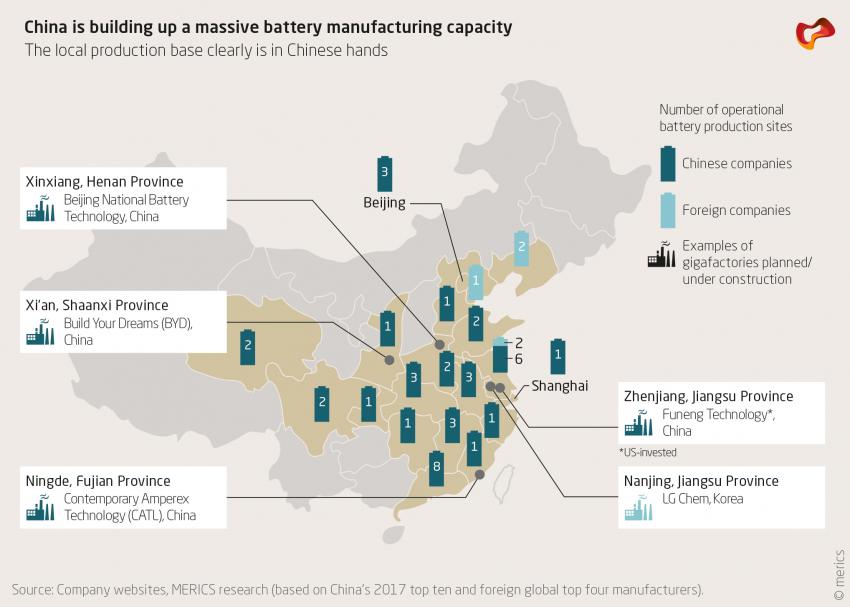 The development of the battery market is closely linked to the booming EV industry. Global sales reached a peak last year and are expected to further increase in the next decade. The race is on: for car makers to secure preferential supply with batteries, and for battery manufacturers to assume global leadership. With the aid of state support, Chinese companies have made a head start. 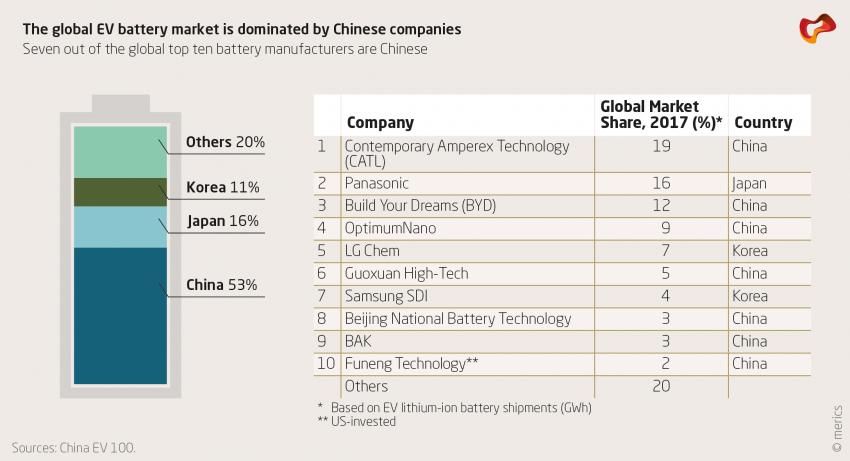 Given the market size, a strong foothold in the Chinese battery industry translates into a front-row position in the global field. State intervention, however, has also benefitted Chinese manufacturers. The market is increasingly concentrated in the hands of a few Chinese companies. By June, the combined market share of the two EV battery behemoths CATL and BYD reached 64 percent – a considerable portion, given that China’s top ten battery manufacturers together hold a domestic market share of about 87 percent.

Last year, only six out of 98 battery (component) companies operating in China were foreign. One of the main reasons for this is China’s certification scheme. Since 2015, the Ministry of Industry and Information Technology has cleared 57 general EV battery manufacturers for business in China. They are virtually all Chinese. Many foreign companies were reportedly denied inclusion in the official list of certified battery producers on dubious grounds, suggesting that foreign companies had to adhere to different standards..

Despite this, foreign battery producers have started to break into the Chinese market– often in form of joint ventures – ownership restrictions were abolished last year. Yet, industry regulations and governmental support have long shielded the domestic industry from foreign competition.

In 2016, for example, Beijing issued draft regulations that did not explicitly discriminate against foreign companies. But the regulations nevertheless created a competitive advantage for Chinese producers. The regulations call for the construction of annual output capacity of eight Gigawatt hours (GWh) for lithium-ion battery manufacturers active in China. At first, only CATL and BYD could meet this criterion. Demand for their products was further artificially boosted, since EV subsidies would only be granted for cars using batteries from companies that met the stipulated requirements.

Changes in the regulatory scheme also drained demand for batteries from LG Chem. The Korean company was put in a predicament that allegedly led to the sale of the company’s Nanjing battery plant – including the rights to use its manufacturing technology – to Chinese auto manufacturer Geely in April last year. LG Chem, however, has already announced plans to establish a new factory in Nanjing.

Allegations of preferential treatment are substantiated by the state-set goals for China’s battery industry. Already back in 2012, the Chinese government stated that two to three leading battery companies with a capacity of ten Gigawatt hours should be brought about by 2020. These ambitions were revised upward to 40 GWh for “leading companies of international competitiveness” in the EV battery industry action plan released last year. These ambitions tie in neatly with the Made in China 2025 industrial policy, which seeks to boost domestic capabilities at the expense of foreign actors and lists EVs as a core industry. The strategy also regards batteries as a key domain for accelerated development. A minimum of 18 EV battery-related smart manufacturing pilot projects were set up since the release of the policy three years ago. Unsurprisingly, they are almost exclusively carried out by Chinese companies.

To cement their supremacy, Chinese battery manufacturers also count on fellow Chinese companies’ support. Last year, for instance, CATL formed two joint ventures with automobile company SAIC Motor. It also entertains strategic relations with other firms such as Dongfeng Motor. The Optimum Nano Innovation Alliance represents another type of initiative that ties together key domestic (read “Chinese”) players across the value chain of EV battery production. Acquisitions of foreign companies and inbound transfer of technology to build up a strong Chinese industry have become relatively scarce. The recent business activities of China’s top five battery manufacturers conform to an expansionist strategy of self-confident actors that started out to conquer the world battery markets.

The case of China’s battery industry shows how government supported demand for EVs and protectionist policies led to a thriving domestic market that has produced national, and increasingly global champions. It serves as a model case of China’s state-led approach to emerging industries that puts free market economies to the test. CATL’s plan to open its first battery plant overseas in Germany in 2022 is a case in point. This time, a Chinese company will be introducing key technology to Europe, and not the other way around. More and more Chinese battery manufacturers are set to follow suit with their own plans to venture into Europe.

The article is part of the latest issue of the MERICS Economic Indicators, a project monitoring China's economic development.