China’s key opinion leaders on the trade conflict with the US: influence and censorship

Who are China’s key opinion leaders on social media? What are their views on the trade war with the US, and how much influence do they have on government policy? Analysis of their early discussion offers insights into Beijing’s approach to the trade war.

Ahead of the vital meeting of Chinese President Xi Jinping and US President Donald Trump at the G20 summit on June 28-29, China has stepped up media censorship and blocked a significant number of financial analyst blogs across social media platforms. This nervousness shows that public opinion is a force that the party-state cannot ignore entirely and has to negotiate with when it comes to forming foreign and economic policy. With tensions rising in the talks with Washington, Beijing is deeply cautious of domestic sentiment.

In this blog post, we look at the early discussions on social media of a number of key opinion leaders (KOLs) who have large influence on the public opinion in China and, therefore, on Beijing’s approach to the dispute with the US.

Since the trade talks between the US and China broke down in early May, the two sides have had no contact. The conflict appeared to be at risk of escalating into a cold war when the US put Huawei and then Chinese supercomputer manufacture Sugon and its affiliates on its “entity list.” If this escalation continues, it will not only put more pressure on the world economy, but also risk creating a “global technological slump”. Whether Xi and Trump can get the negotiations back on a more constructive path depends fundamentally on how China interprets the US’s motivation.

Debate has been silenced since September

Online discussions about the trade war are currently being heavily censored. However, March to September 2018 was a relatively relaxed space in which discussion of this topic was tolerated, perhaps for the government to test the public sentiment and gather opinions. The discussion has been silenced since September, when China released its first position paper on the issue and entered negotiations with the US. Looking at the discussion from this earlier period helps to understand China’s perspective on the conflict.

Unfortunately, the outlook does not look bright, according to the views expressed in 104 articles written by five of the most influential voices on the most popular Chinese social media platform, WeChat (see Box for details).  Four of these can be considered independent KOLs. The fifth is a public account affiliated with the People’s Daily, which is used as the benchmark here for the perspectives and opinions communicated by the government during this period.

Figure 1 shows how many arguments about the cause for the trade conflict fall into different categories. It reveals that since the early days of the trade conflict with the US, these KOLs see the major cause as political in nature. They believed that the US and China have entered “the Thucydides Trap,” when a rising power threatens to displace the current superpower. The US wants to remain the one superpower in the world and therefore the trade dispute is only used as an excuse to contain China’s rise, they argue.  In an article from March 2018 published on Wuxiaobo Channel, guest commenter Guo Shiying, a financial analyst, succinctly argued: “Trade war is not just a trade war. China-US competition has entered deep water… 2018 should be the year marking the beginning of Sino-US conflict, which is likely to escalate. The uncertainties in the economic and trade relations and even regional security will be increasingly presented.” 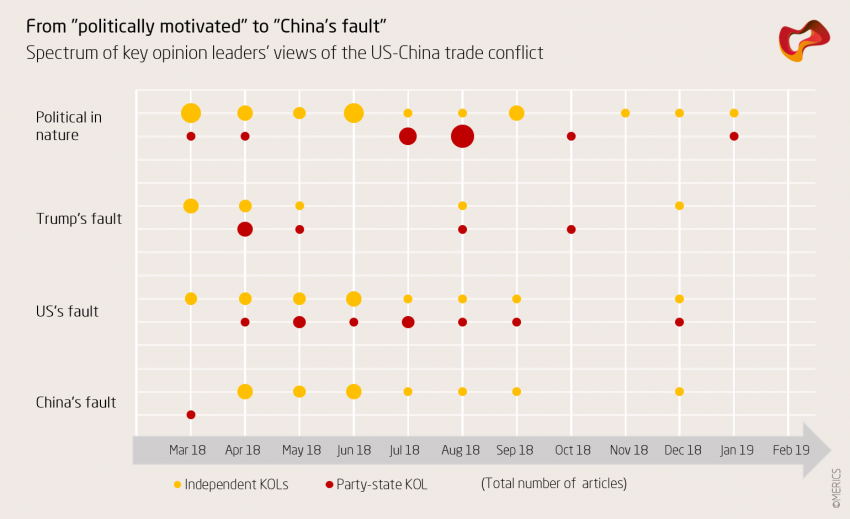 Figure 2 reveals that an overwhelming majority of the KOLs prepared the Chinese public from the onset of the friction for the dispute to be protracted. There was only one mention by independent KOLs in June, and twice by part-state affiliated KOLS in August and November, of the possibility that it could be resolved.

“Not only a trade war, but a comprehensive strength contest”

The idea that the conflict could escalate to other realms was also widely envisioned. Ren Zeping, the chief economist of Evergrande group, wrote in July 2018: “What is presented to us is not only the trade war, but also the comprehensive strength contest in the fields of economy, politics, culture, science and technology, cyber, and ideology…In the history of the rise of emerging powers in the past few hundred years, the current trade wars, economic wars, resource wars, and financial wars are inevitable and must be faced." 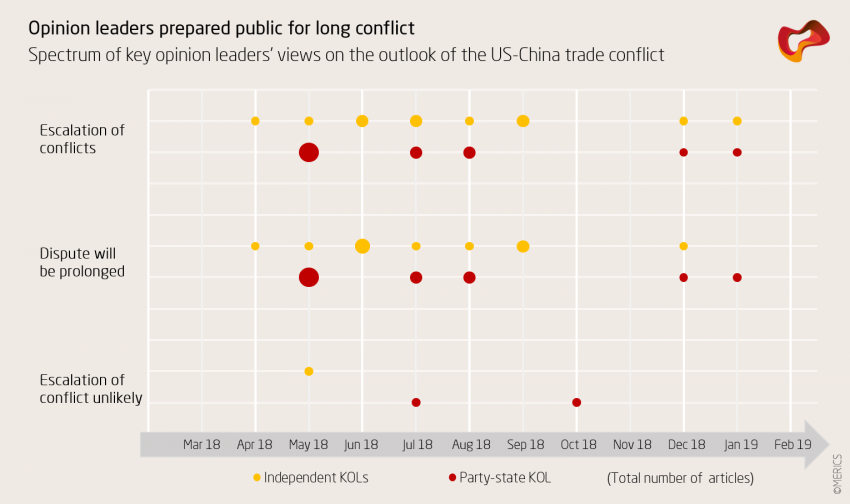 Further escalation is likely if mistrust is not dispelled

Since discussion from both independent and party-state affiliated KOLs are examined here, their views offer a glimpse of Beijing’s thinking when entering negotiation with Washington. China has been deeply suspicious of the US since the early days of the bilateral conflict. Recent moves by the US to put a limit on the export of technologies to China will only confirm this suspicion. China has since made clear that it is considering using rare earth and currency to fight back. Further escalation is very likely if they do not dispel the mistrust in each other at the upcoming G20 meeting.

Xiakedao (侠客岛): 1.3 million subscribers. Managed by a group of young journalists from the People’s Daily, this public account has published a large number of articles by scholars on the topic of trade. Although it is a party-state affiliated media channel, when compared to commentaries on the official media’s traditional outlets, the articles have more substantiated arguments and vocal policy recommendations.

Wuxiaobo Channel (吴晓波频道): With more than 2 million subscribers at its highest point and valued at 2 billion yuan in a financing round in 2017. In April 2019 this number was disputed and is currently being investigated by Chinese regulators. Wu Xiaobo is a former business journalist at Xinhua and a writer of many published books. He often invites scholars and industry experts to comment on financial topics.

Ning Nanshan (宁南山): 1.3 million subscribers. A self-claimed “middle-class worker in Shenzhen”, his personal details remain unknown to the public. The topics he covers include current affairs in the high-tech industry and economy. Well-known for the abundant data provided in his articles to back-up his arguments, his public account is currently blocked.

Zeping Macro (泽平宏观): 0.8 million subscribers. A public account managed by 任泽平, the chief economist of Evergrande group, China's second-largest property developer by sales. He is the former deputy director of the State Council’s Macro Department of the Development Research Center.