The plans for an economic corridor between Pakistan and China preceded China’s Belt and Road Initiative. The project was first announced in the summer of 2013, when then-prime minister Nawaz Sharif met Chinese prime minister Li Keqiang in Beijing. The focus was on connecting China with the Chinese-invested Pakistani port of Gwadar through highway, rail and pipeline infrastructure. Project plans had a five-year horizon for implementation, and the sums involved – ranging between ten and twenty billion USD – were moderate compared to China’s current ambitions in Pakistan. 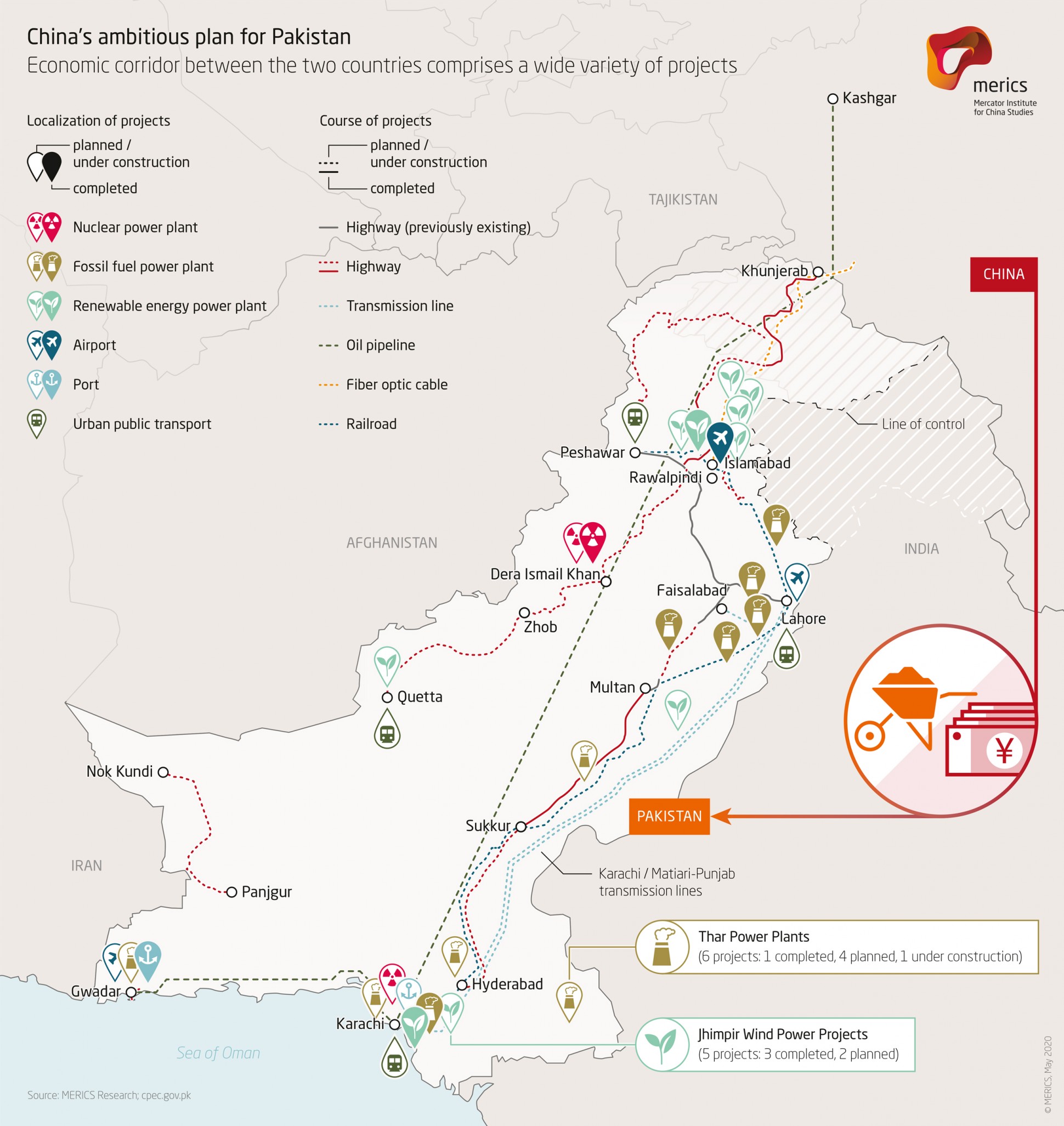 These activities were later reframed as part of the so-called “China-Pakistan Economic Corridor” (CPEC), which was only officially launched in April 2015 while China’s president Xi Jinping visited Pakistan. Emphasis shifted towards power generation in Pakistan, and estimated costs ballooned to 46 billion USD. The two governments then drew up a “Long Term Plan,” starting in 2017 and drastically expanding the projected timeline for implementation up to 2030. Projected costs moved up to 62 billion USD, and Pakistani officials have since mentioned even higher numbers.

CPEC projects (as listed on this Pakistan government website) constitute the bulk of BRI-related activities in Pakistan, and its stated goals align with those in China’s main BRI policy documents. CPEC, however, does not cover all joint Sino-Pakistani infrastructure efforts that can be seen as furthering BRI goals. CPEC projects, moreover, do not always involve China directly. In line with the methodology behind the MERICS Belt and Road Tracker, we have chosen to include non-CPEC projects when they fall within the range of BRI goals.

Grand geo-strategic designs should not be overstated

Through CPEC, Islamabad seeks to leverage Chinese capital, production capacity, and know-how in order to upgrade Pakistan’s infrastructure and build a “mechanism for sustainable economic growth.” In return, Beijing gains a connection to the Arabian sea, providing a contingency trade route to the risk-prone Malacca Strait in Southeast Asia. However, as with the wider BRI, there are multiple drivers, and the importance of grand geo-strategic designs should not be overstated.

Chinese wisdom holds that state-driven investment in infrastructure creates economic growth, social stability, and an improved security environment. As a counterweight to India in South Asia and a potential training ground for Uyghur militants from Xinjiang, the stability of its “all-weather” ally is a major concern for Beijing, and so CPEC was deemed a necessary strategic commitment.

"The stability of its “all-weather” ally is a major concern for Beijing, CPEC was deemed a necessary strategic commitment."

Creating trade routes and demand in Pakistan also furthers the stability-minded development of China’s own Western interior. On the ground, Chinese companies are driven forward by overcapacity at home. They are also lured by easy finance and a closed bidding process in Pakistan. While Pakistan has scrambled to address energy shortages by adding coal capacity, Chinese companies are facing dwindling demand for the same technology at home.

At times, the commercial logic of CPEC appears at odds with the overarching goal of bringing prosperity to Pakistan. Chinese companies have often obtained long-term contractual rights to operate road and energy infrastructure and to collect electricity or toll fees at guaranteed high prices. These high prices threaten to put Pakistan at a disadvantage compared to regional competitors like Bangladesh.

Although the idea of a transport corridor has been the focus of international attention, power generation makes up the bulk of already completed CPEC projects. The MERICS database marks 25.5 billion USD worth of projects as completed, 75 percent of that figure being for energy projects. This includes solar, hydro, and wind powered generation, but fossil-fuel fired capacity constitutes roughly 60 percent of the added megawattage if we exclude nuclear.

Even five years in, it is difficult to fairly measure the success of an initiative as unique and ambitious as CPEC. 32 so-called “early harvest” projects have been completed as of 2020, but many projects have come in delayed and overbudget. It would be difficult to claim that CPEC has achieved the long-term plan’s 2020 goal of having “basically addressed” the “major bottlenecks to Pakistan’s economic and social development.”

"CPEC was and is an attractive gamble, but the clock is ticking."

As with other initiatives along the BRI, Beijing struggles with local politics and bureaucracy. Even when Gwadar was facing power outages, the provincial government of Balochistan took more than three years to approve construction on the Gwadar power project. Pakistan faced another balance of payments crisis in 2018. The following year, Prime Minister Imran Khan was forced to ask the International Monetary Fund (IMF) for a six billion USD bailout. Pakistan’s economic troubles predate and run deeper than CPEC, but CPEC is an ambitious gamble that heightens risks and is a contributing factor to Pakistan’s economic distress. Faced with onerous capacity payments amid a likely recession, Khan has recently called upon China to soften the terms of its power agreements.

CPEC was and is an attractive gamble, but the clock is ticking, and CPEC now only has ten years to achieve its stated goal of transforming Pakistan into a prosperous regional trade hub. Credit lines for CPEC are justified by reference to future growth and revenue. With coronavirus-induced recession looming, it requires increasing optimism to imagine CPEC’s plans for transforming insurgency plagued Balochistan into a hotspot for coastal tourism.