Policy changes have made the Chinese truck sector attractive to foreign manufacturers after decades as a protected backwater. As Beijing has shifted its focus from increasing gross domestic product at all cost, it has taken interest in the truck sector as crucial to its plans for high-quality economic expansion. This has made the industry more political – but will also raise demand for high-quality trucks, long made by EU, US and East Asian players. A new race is on between foreign and domestic truck makers to secure market share in China. 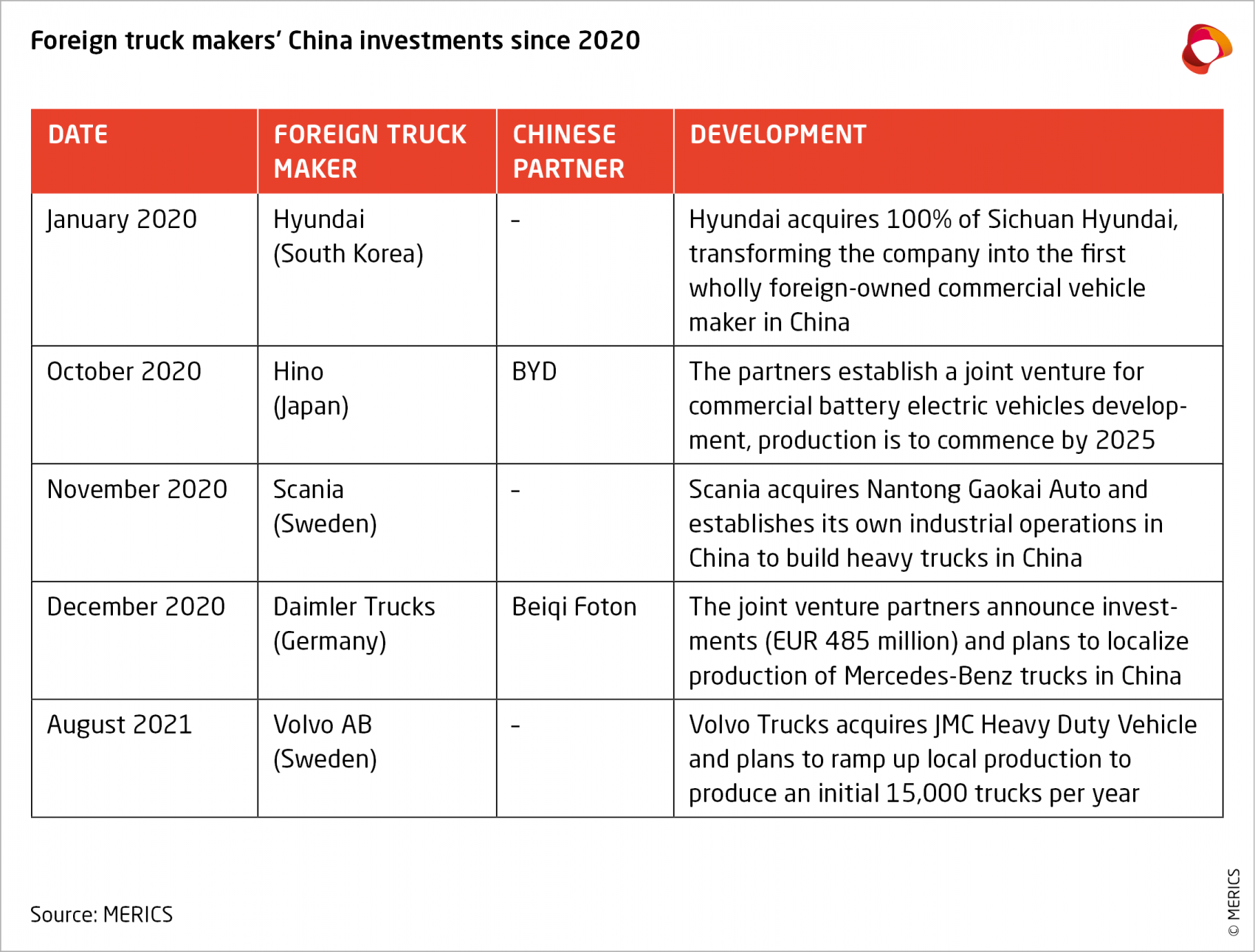 China in 2020 removed its caps on foreign ownership in the commercial-vehicle sector and European and East Asian manufacturers like Daimler and Hyundai jumped at the opportunity. The heavy-duty truck (HDT) sector is dominated by state-owned enterprises (SOEs) like FAW Jiefang and SAIC, and plagued by overcapacity and low prices, regulatory neglect and problems with joint-venture terms. But these companies took the view that the market is simply too big to ignore – that economic rewards outweigh political risks. 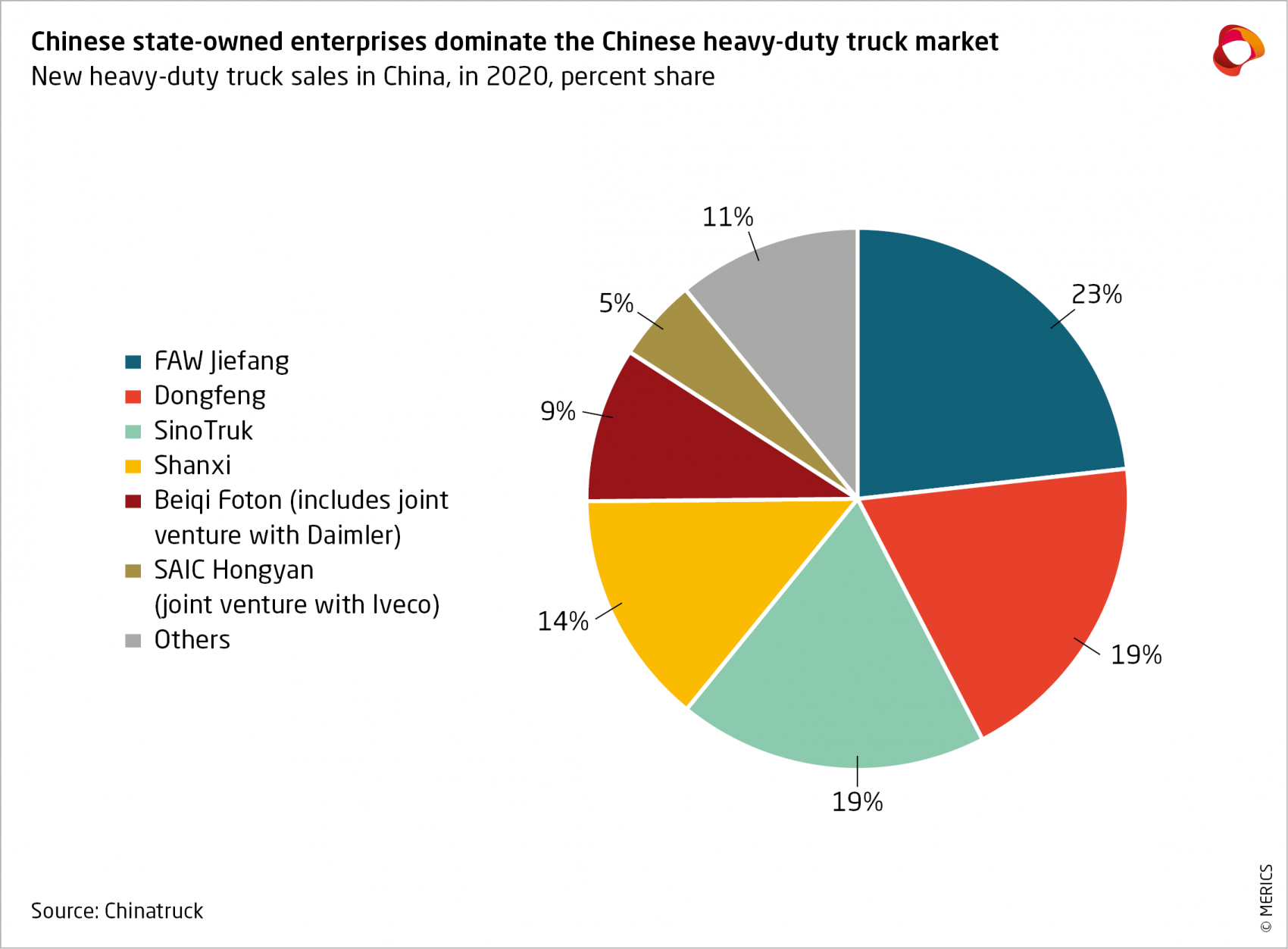 This rationale illustrates why so many foreign companies in different sectors find China so irresistible: the country’s size and the ambitions of the central government make for great market opportunities. China’s HDT market is the world’s largest and foreign companies’ market share is below 10 percent (while accounting for more than one in two passenger cars sold). But foreign players can now strengthen their positions by helping Beijing drive industrial upgrading and climate protection, and develop new infrastructure and efficient logistics. 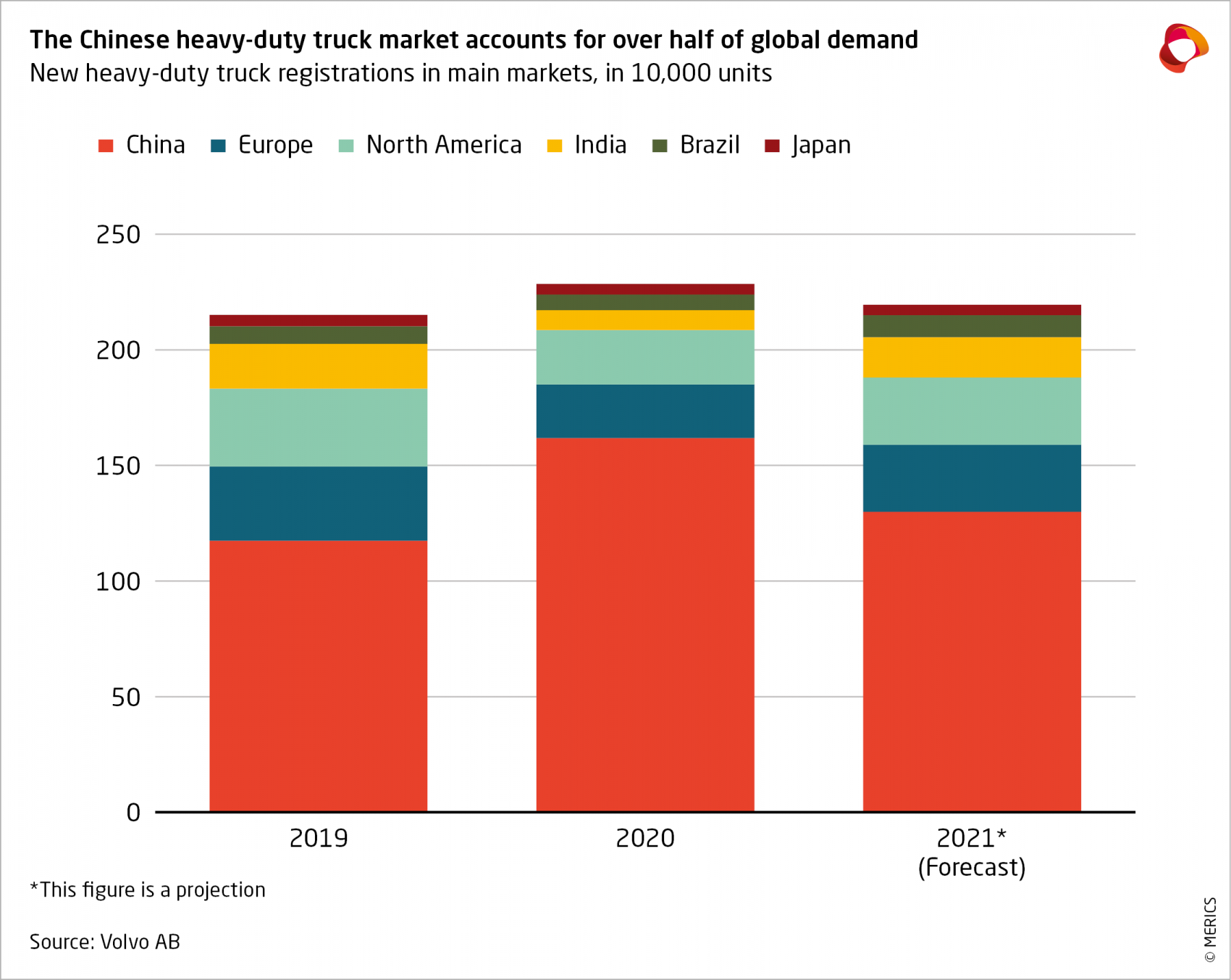 To consolidate China’s position as an industrial hub, Beijing sees foreign truck makers as catalysts that can transform the domestic sector. New competitors are meant to force its inefficient SOEs to turn into stronger players, even global ones that can compete in third markets. The State Council recently established an inter-ministerial meeting system to promote the development of “advanced vehicle technology” in the truck sector – and more coordination and policy support from the central government is likely in the coming months.

Beijing is rolling out the red carpet for foreign truck makers. But they should remember China’s long-term strategic objective for their Chinese rivals – the country’s high-speed rail sector is now dominated by CRRC, an SOE and emerging global player. As China is reducing its reliance on foreign technology suppliers and building an autonomous supply chain, Beijing expects foreign players to localize production – although there are preferential policies and tax incentives as sweeteners. Non-localized firms are increasingly excluded from public tenders.

Green technologies like zero-emission trucks are key for China’s industrial and environmental ambitions. The Made in China 2025 strategy, published in 2015, included the development of so-called new energy vehicles, and since 2020 China has doubled down on these aims. Having mastered lithium battery technology, China is going all in on hydrogen. In 2020, the Ministry of Finance announced a subsidy program to develop a hydrogen supply chain. Funds are primarily directed towards projects using hydrogen-powered fuel-cell vehicles and trucks.

Key regional hubs including the Yangtze River Delta are by 2025 to use new energy trucks to transport 80 percent of bulky cargo. This is opportune for foreign producers. Many of them have committed to offering nothing but CO2-neutral trucks by 2039 and have started rolling out fuel cell electric vehicles. US fuel-cell truck maker Hyzon Motors has supplied vehicles to companies in China, often in pilot areas. The CEO has said: “Hydrogen fuel cell technology has been adopted more quickly in China than in the rest of the world.”

China is establishing an intelligent infrastructure that offers foreign truck makers opportunities for research and development (R&D). The government’s new infrastructure initiative is driving the rollout of 5G, hydrogen-refueling and battery-charging stations. Italian truck maker IVECO and the Sino-US autonomous vehicle startup Plus is about to test level 4 autonomous driving in China; Germany’s Traton has invested in Sino-US startup TuSimple and wants to deploy its autonomous vehicle offerings across Europe, China and North America.

Foreign manufacturers increasingly regard China as an innovation driver. Scania is not only investing in production but also plans to open a Chinese R&D center and is looking for Chinese R&D partners. China is “not only the world's biggest car market but also a significant market for new technologies and an important purchasing market,” as Daimler said in its annual report. Chinese customers are part of that allure because they happily adopt new technologies quickly. Truck makers could transfer innovations road-tested in China to other markets.

China by 2025 wants to build a digitized and greener logistics system, a key part of Beijing’s ambition to turn China into a manufacturing superpower. As more than three quarters of China’s freight tonnage is moved on highways, this plan will stimulate demand for advanced, green and digital trucks, a big opportunity for foreign producers. For example, Beijing wants to establish a fully developed cold-chain logistics network. Daimler, Hyundai and Scania have already struck deals for suitable high-end trucks with cold-chain distribution players.

A stronger presence in China will allow foreign truck makers to keep pace with Chinese competitors as they try to expand globally. The regulatory changes outlined above offer opportunities for foreign truck makers, but also create momentum for Chinese producers to move into more sophisticated market segments. SAIC recently finished a plant that will produce 10,000 hydrogen-powered semi-trailer trucks annually. Geely, a newcomer in the sector and major shareholder in Volvo and Daimler (both of which plan to double down on the Chinese tuck market), has unveiled its Homtruck that runs on methanol or batteries.

Foreign suppliers are also betting on new opportunities in China by supplying Chinese rivals with cutting-edge technology. Fuel-cell maker Ballard and Weichai Power, an SOE that is the biggest investor in the Canadian company, formed a joint venture in 2018 to supply China’s HDT market. Bosch, Cummins and other players have since increased their investments. Chinese truck makers dominate a huge domestic market, and government support and foreign high-tech make could make them formidable partners – and international competitors. Staying out of the Chinese market could be riskier for foreign players than nosing into it. 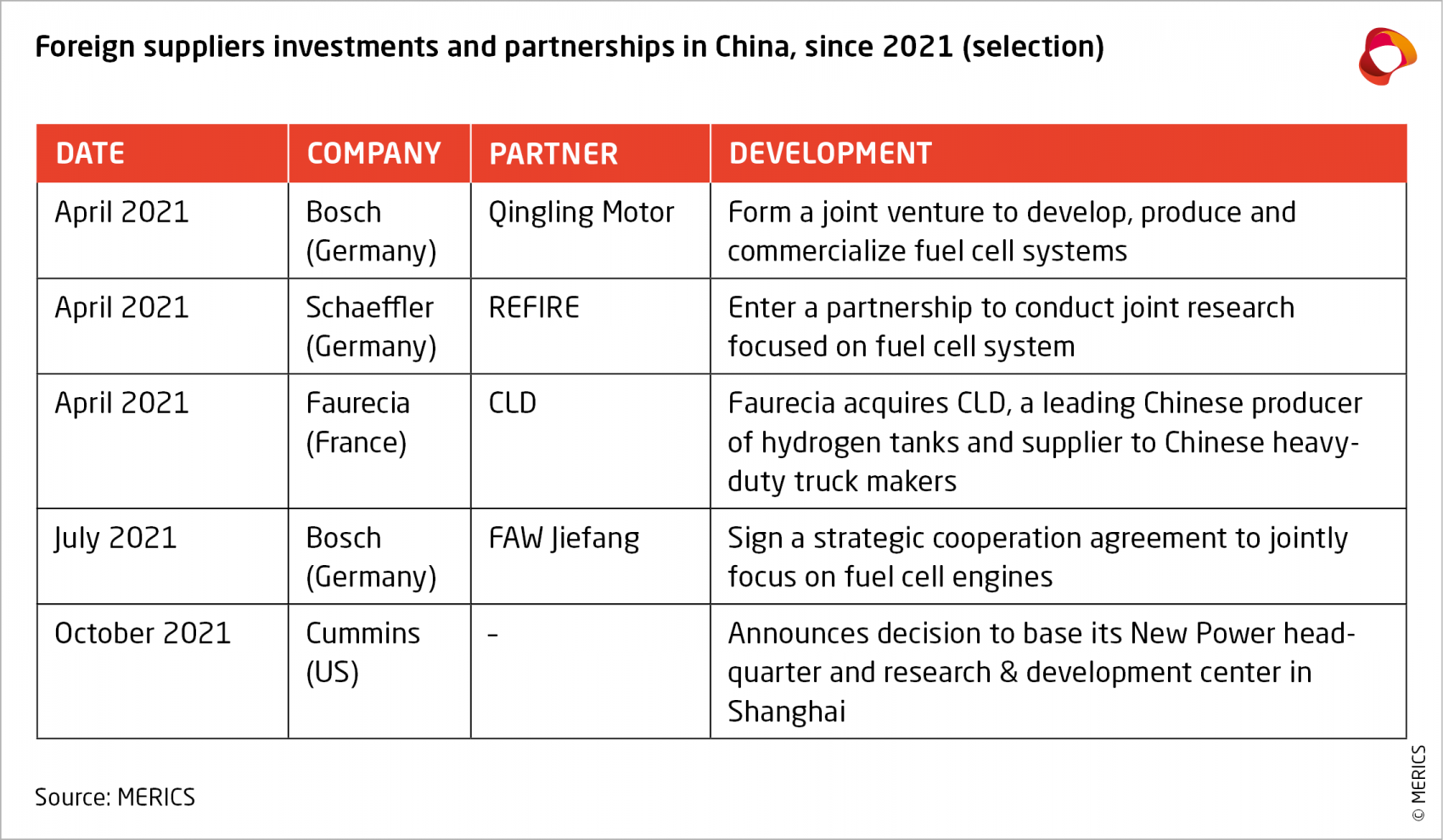