Formally adopted on March 11, China’s 14th Five-Year Plan marks a shift away from the quantitative growth-focus of Beijing’s previous plans. Instead, it aims to usher in a more inward-looking “new developmental stage” that targets “quality development.”

The Chinese leadership's plan for China’s development from 2021 to 2025 prioritizes what it calls the “internal cycle,” by which it aims to strengthen the domestic economy and consolidate social development. The goal is to cut as quickly as possible the reliance on foreign technology and dependence on imported resources, and to double down on existing plans for industrial modernization and technological innovation.

The long-term goal of this repointed development strategy – away from economic growth targets and towards systemic resilience – is not only self-sufficiency in essential resources and key technologies. Its stated aim is to become a “manufacturing superpower” and a global leader in strategically important emerging industries. In stating its “long-term objective” of “basically completing socialist modernization” by 2035, the CCP even suggests a timeframe in which it plans to fulfill this ambitious goal.

Unlike its predecessors, the 14th Five-Year Plan contains no concrete targets for growth of gross domestic product (GDP) and only a modest sprinkling of other economic targets. Given rising international tensions and what the document calls “challenges unseen in a century,” omitting targets could be wise. But even for a strategic policy outline, the plan is vague about implementation of and possible mechanisms to achieve its goals.

The plan consists of 19 sections (篇), 65 chapters (章), and 175 sub-sections (节). We identified 12 general policy areas and counted the chapters on each (see Exhibit 1). The largest number is dedicated to strengthening China’s domestic socio-economic foundations (14%), and to supporting technology and innovation (also 14%). The space given over to these issues gives these areas more prominence than more traditional ones like infrastructure and urbanization. They even outnumber chapters on public sector reforms and welfare. 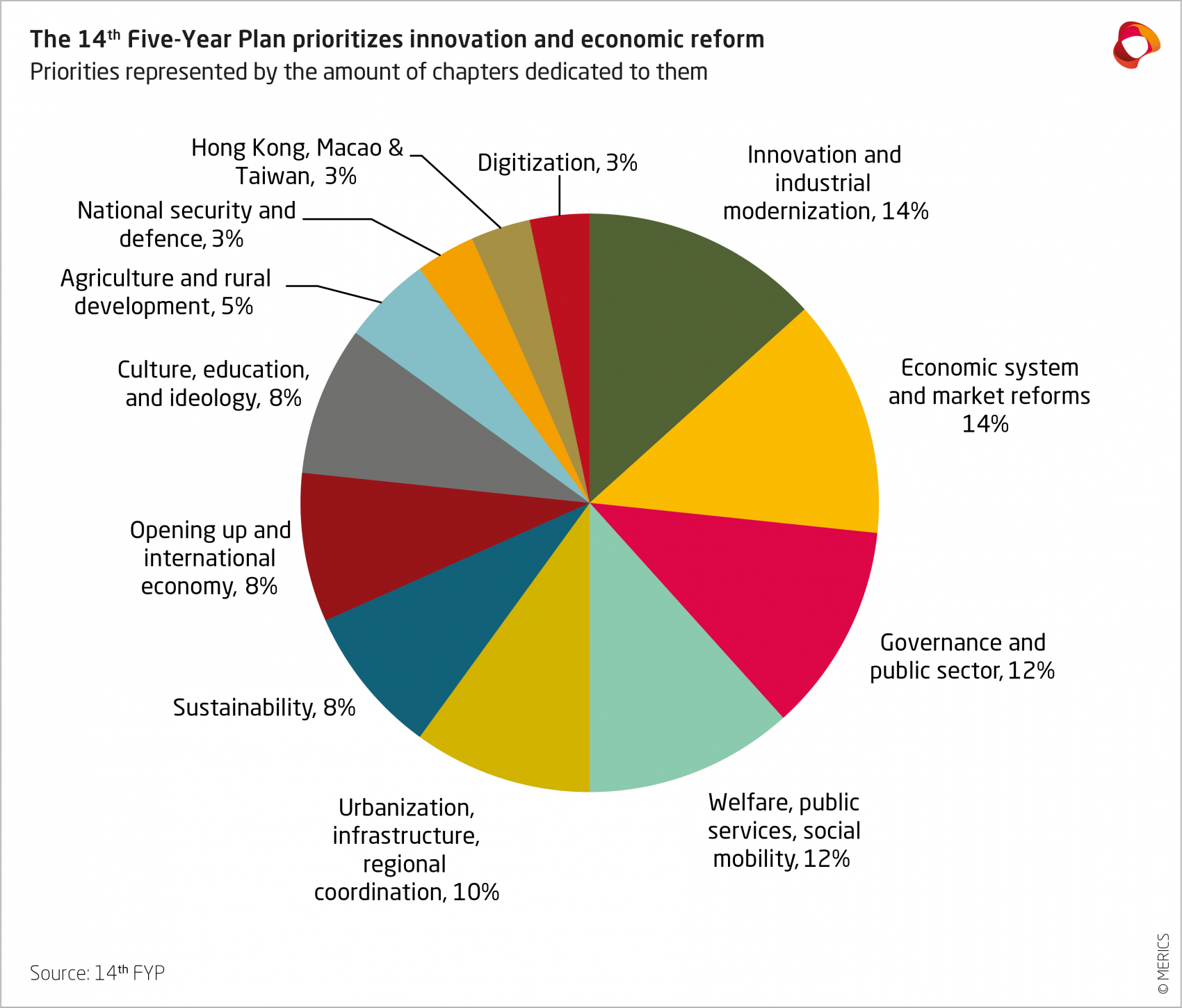 Sustainability, infrastructure and urbanization are less pronounced than in the last two plans; culture and ideology have gained in weight, as the “institutionalization of Xi Jinping thought” in the cultural and educational sectors is becoming a constant in China’s current political environment (see Exhibit 2). Beijing sees political awareness as an integral part of the “quality development” it envisions for China. 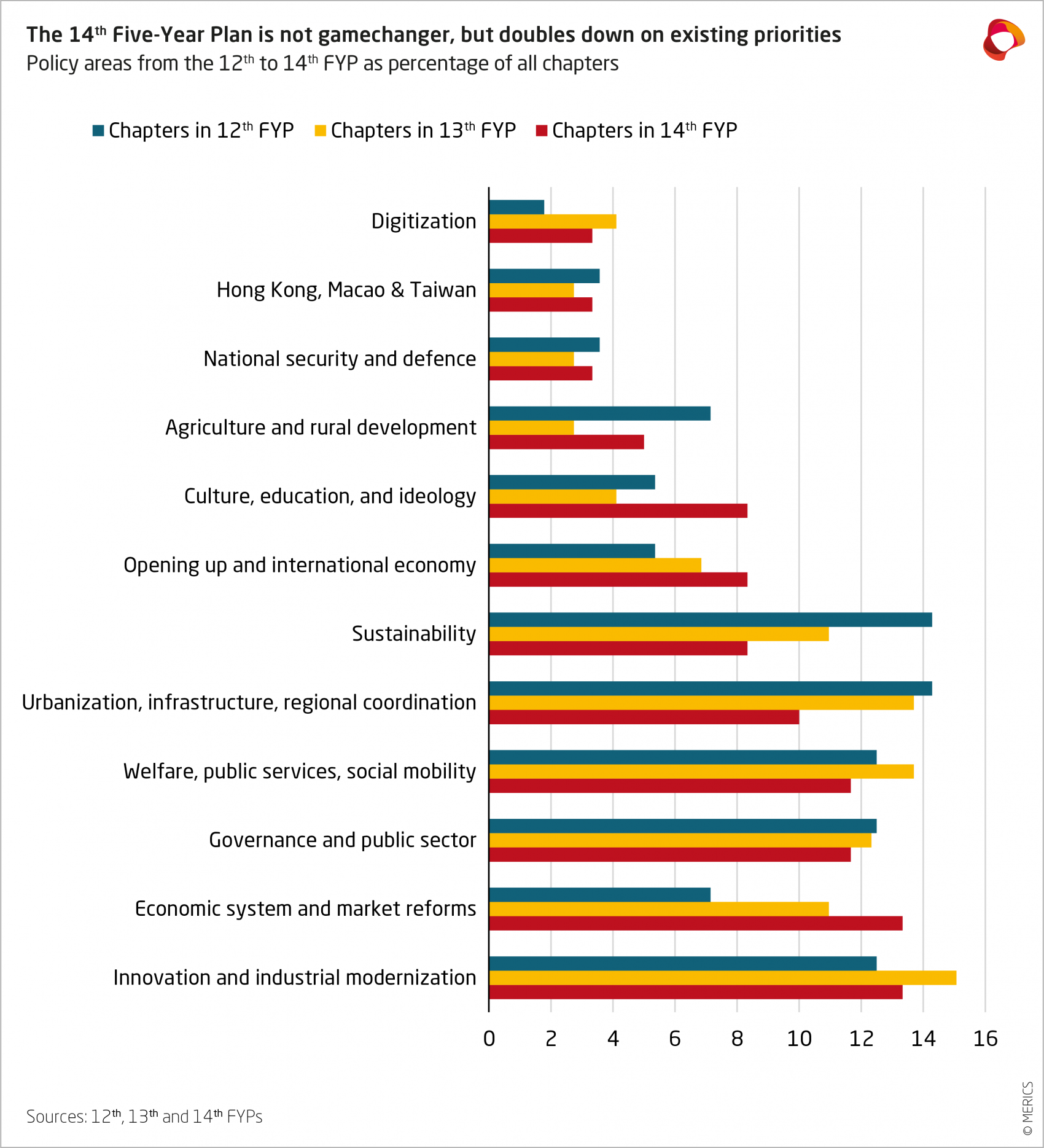 The chapters dedicated to public services, Hong Kong and Macau, and defense (see Exhibit above) are relatively stable in number. On the other hand, innovation is “only” mentioned 164 times, compared to 207 in the previous plan – although this may be explained by the fact that the latest plan has fewer overall chapters than its predecessor. The 13th Five-Year Plan, after all, had to introduce the Made in China 2025 strategy (see Exhibit 3).

A new main section on digitization shows that it remains a key priority. The word “digital” (数字) is mentioned 80 times compared to four times in the 13th Five-Year Plan. There is a qualitative shift from the 13 th plan, which was more about building digital foundations, to the 14th plan, which is now pushing general application of digital and smart solutions in the economy, governance and the social sector. National security is another key issue and increasingly named together with food, energy, technology and even cultural issues. 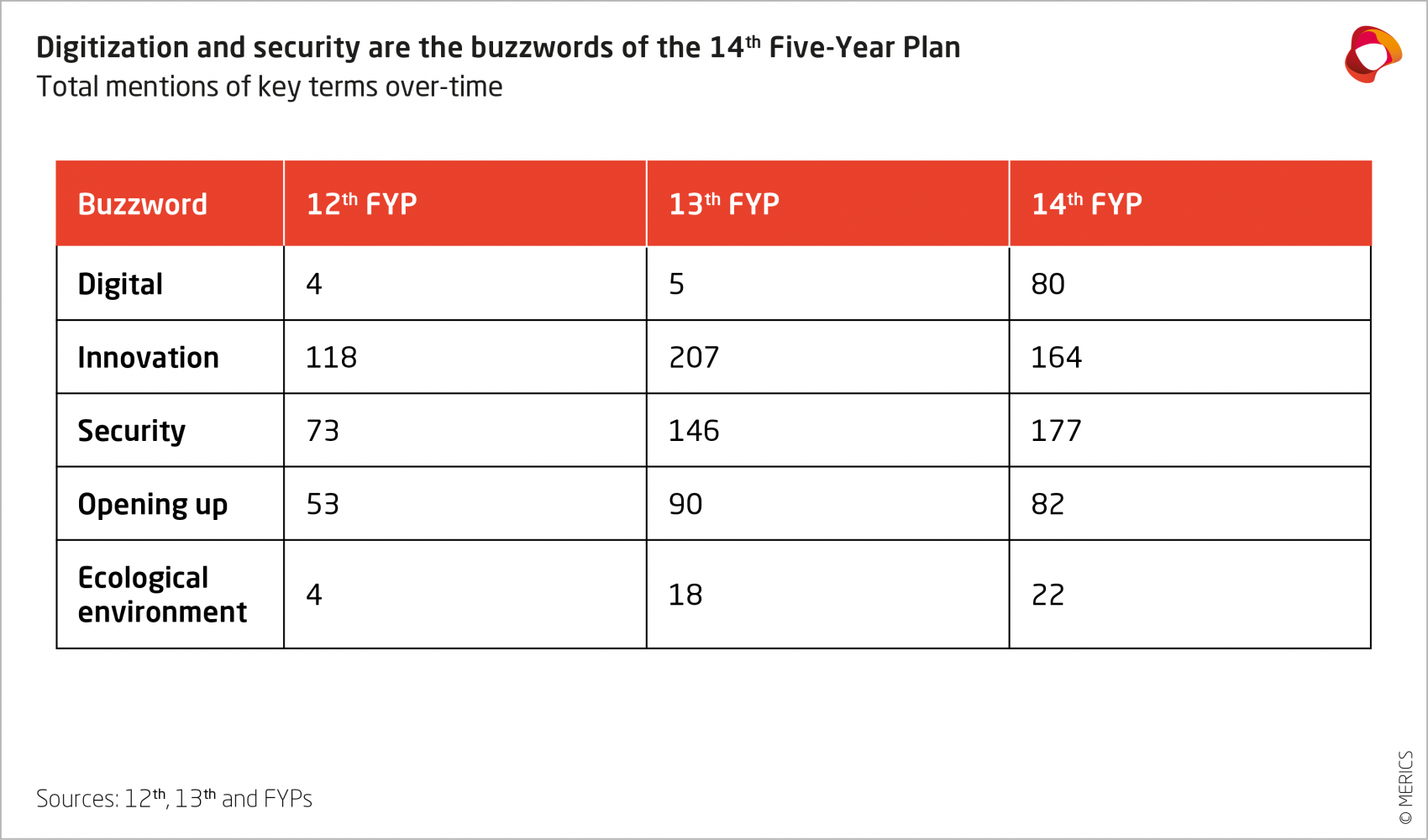 Decoupling not an option – yet

The plan’s “dual circulation strategy” refers to the domestic and international economies and is seen by some observers as an early sign of decoupling. But the concept is mentioned only four times in the document and its focus is clearly more on the “great internal cycle” (大内循环) that is seen as the foundation for the country’s development. The so-called international cycle – i.e., the global economy – is seen as a means to both strengthen the domestic economy and enhance efficiency.

This is less the beginning of a decoupling strategy than a conceptual crutch for viewing national in conjunction with foreign economic interests. International economic relations remain key to many of the objectives of the 14 th Five-Year Plan. But the implication is that the CCP sees the internationalization of the Chinese economy not as a goal in itself, but rather as a support for domestic modernization and development.

Five-Year Plans also include tables listing key projects and initiatives (see Exhibit 4). These identify specific policy priorities, sectors, and national projects considered central to the social, economic and technological development targets of the plan. The new plan outlines 119 key projects in 19 tables, compared to 165 in the 13th plan, with over a third of them, or 46, to be exact, in the areas of industrial modernization, technological innovation and digitization. 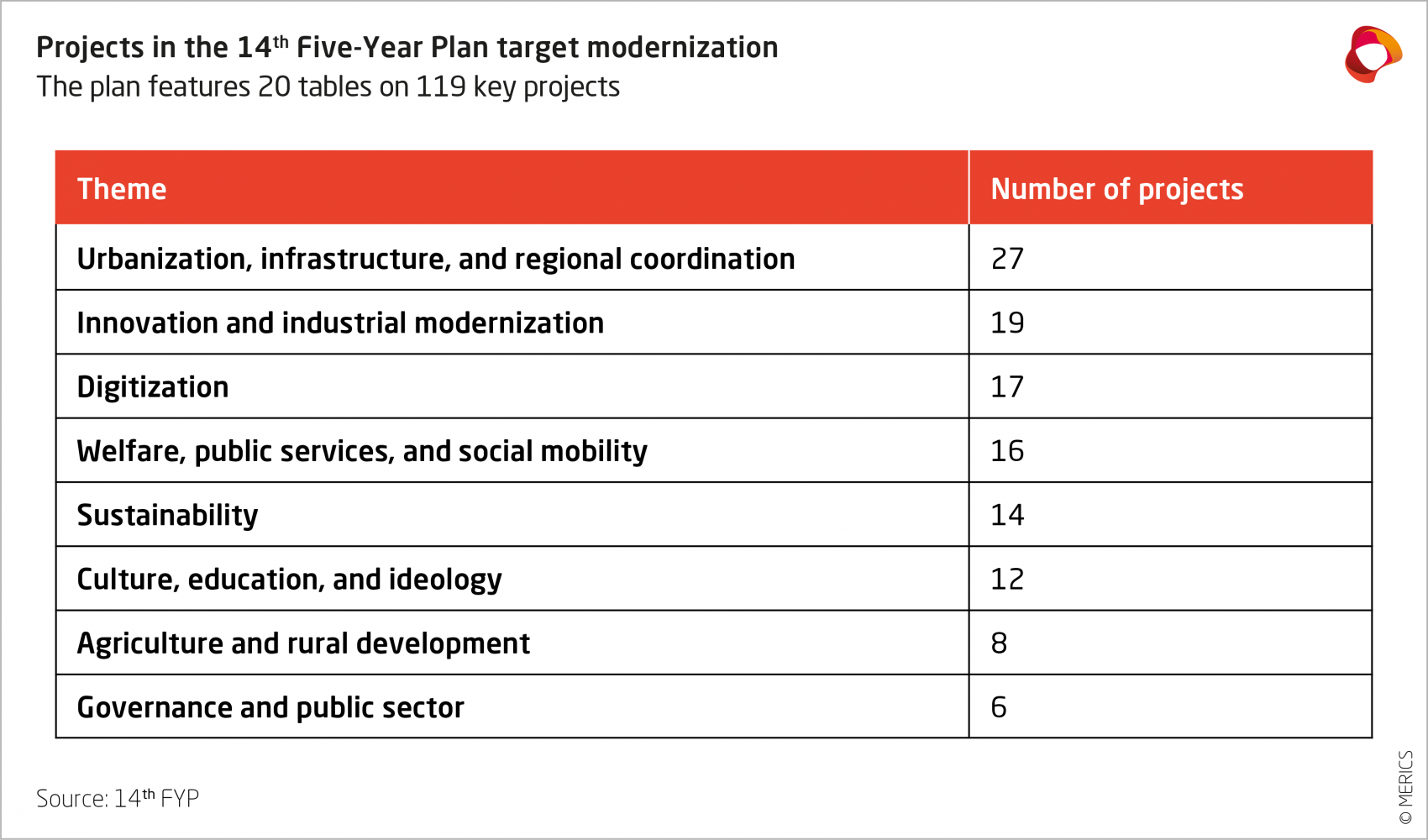 With 27 key projects in the areas of construction and regional development, infrastructure remains central. Although the projects are less extensive and fewer in number, China is eying 30 new airports, and thousands of kilometers of new roads and railroads. Infrastructure remains the default approach to creating economic growth and providing economic opportunities, while modernizing rural areas and smaller urban centers remains part of the drive to revitalize rural areas weakened by migration.

A new focus is on basic research. Labs and research centers working on cutting-edge science and on technologies of long-term strategic importance are set to receive new levels of support. The plan does not detail concrete steps, but it does emphasize that basic research is the foundation for scientific and technological development.

Many of the technologies targeted by key projects were already mentioned in the 13th Five-Year Plan – for example, artificial intelligence (AI), quantum science and cloud computing – and are prerequisites for China becoming a “manufacturing superpower.” But their new prominence in the latest plan is also a reaction to growing international tensions over access to technology and resources. Strategic emerging technologies like blockchain, semiconductors and next-generation AI feature more prominently than before. 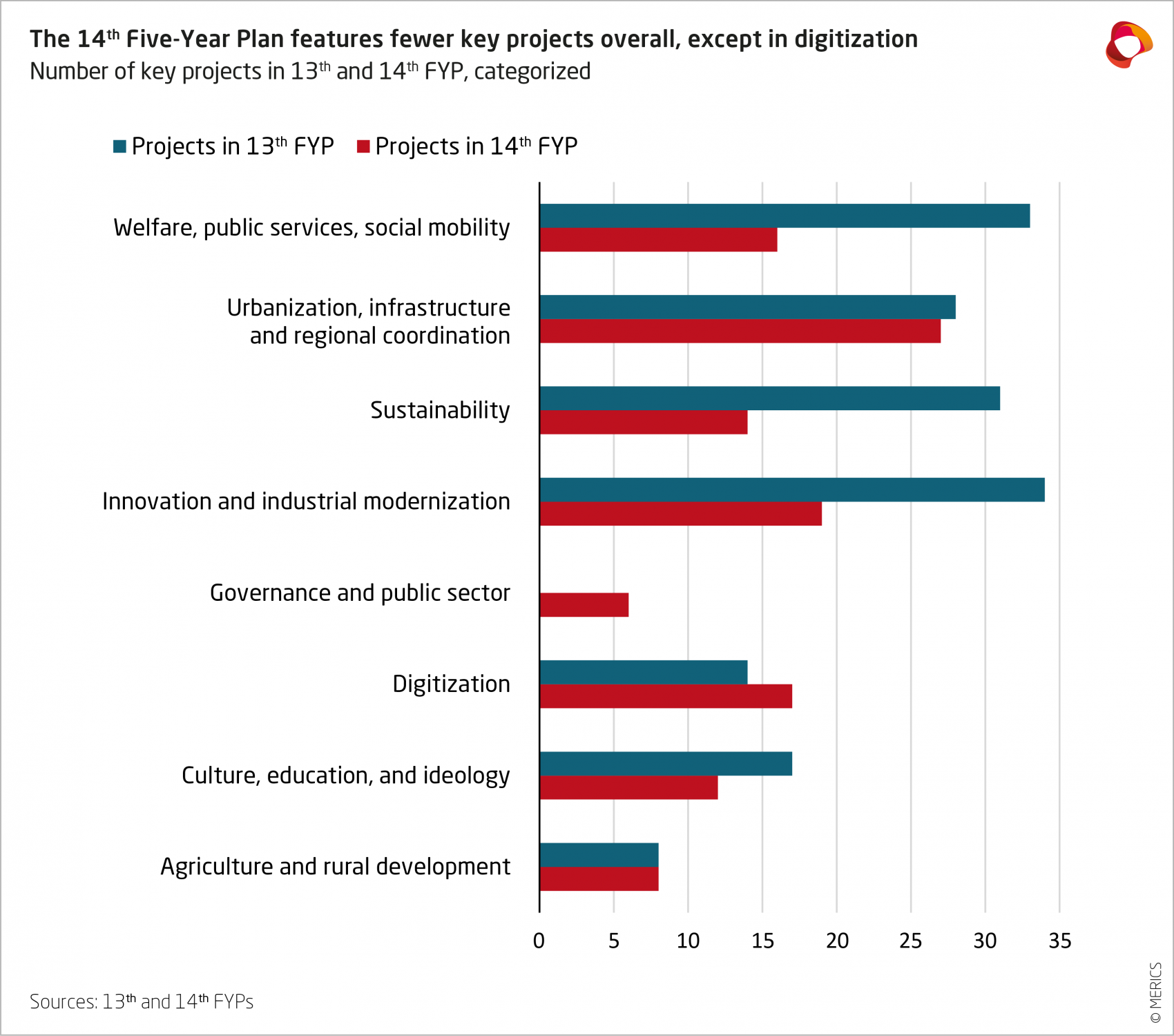 The number of projects dedicated to agriculture and rural development remains low, while that for projects relating to environment and sustainability is only half that in the 13th plan (see Exhibit 5). The 14th plan does not mention CO2 emission caps or tougher climate policy, putting the burden of realizing China’s climate pledges for 2030 and 2060 on ministries and provinces. They will now have to define the country’s green development plans.

Given the vague language of the new plan, it is clear that the guiding principle of “upholding party leadership” will be the fallback for officials for the time being. Where no concrete targets exist, central party and ministerial guidance will fill the voids in a more flexible and issue-specific manner.

Finally, the sequence of chapters and special projects in the 14th Five-Year Plan demonstrate the increased priority given to innovation and technology – these issues have moved to the very top of the document (marked red in Exhibit 6). While the old plan initiated the focus on technological innovation, the new one aims to solidify it (see table below on order of special projects). 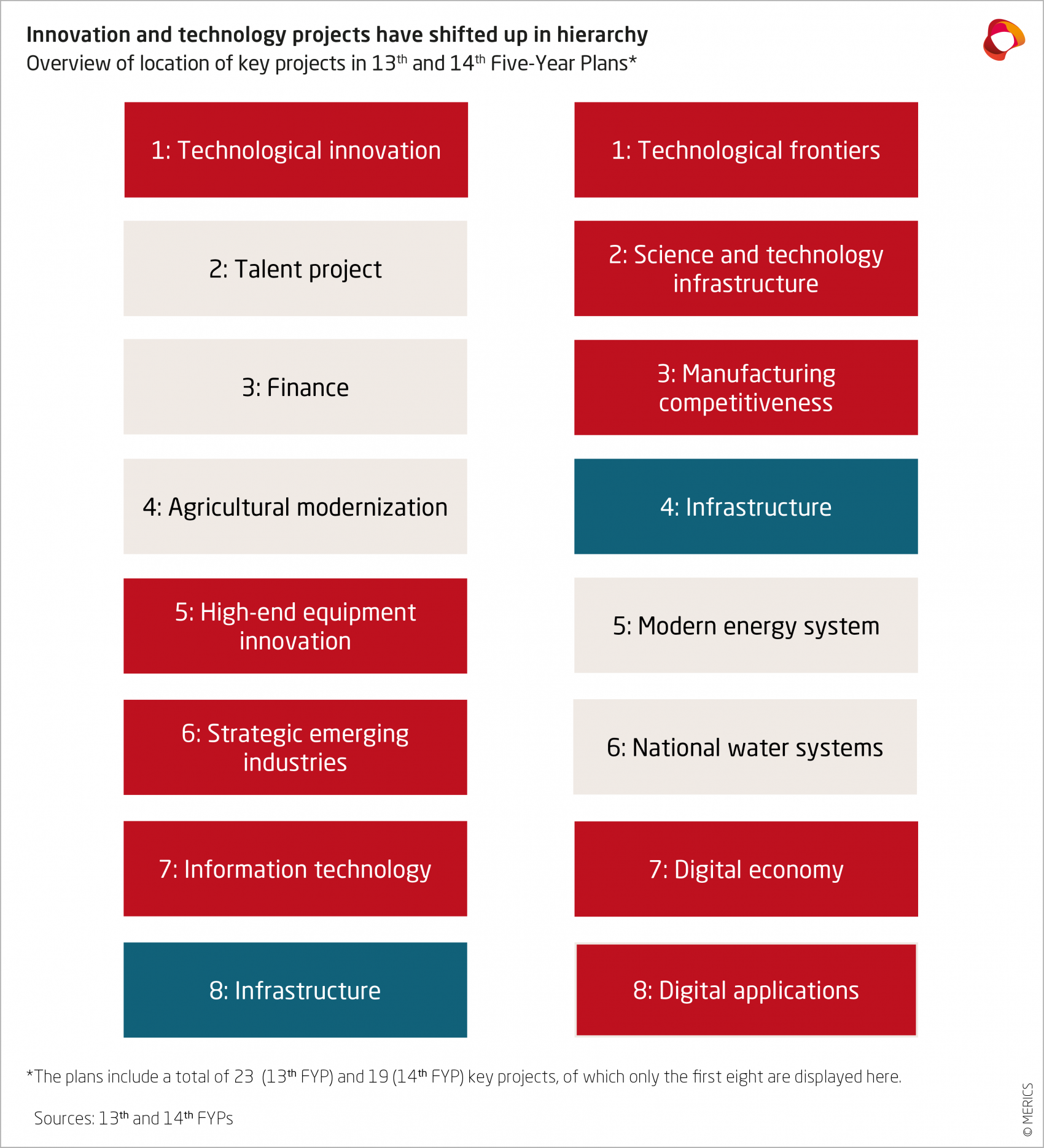 The 14th Five-Year Plan is not a game changer, but a recommitment to existing objectives. Its focus on innovation and technological development is not new. But it comes with a new emphasis on systemic resilience – in particular, on a strong domestic economy, stable socio-economic development, and industry insulated against external risks to supply chains. Concrete rollout is vague in the plan, but in the coming months, policymakers in China will double down on support for the sectors and technologies outlined in the plan. The new development stage marks a period of self-strengthening, especially at a time in which the international outlook is full of challenges.

The 14th Five-Year Plan does not aim for economic decoupling. But it does aim to set the points so China can end its reliance on foreign resources and technology – and become the global leader in strategic emerging industries, frontier technology and science. Dependance on imported essential resources and key technology is perceived as a security issue, and more self-reliance seen as the path forward. The new plan will strengthen industrial policy and support for domestic sectors and technologies deemed essential to the national goal of becoming independent from strategic resources.