Huawei was once a shining beacon of China’s technological development and successful internationalization, but now the maker of information and communications technology finds itself on the back foot in many countries due to security concerns. It has seen foreign sales decline and its dependence on foreign technology components painfully exposed. As a result, the Communist Party leadership in Beijing has made supply-chain reliability and core technology capabilities urgent matters of national security and central points of its latest Five-Year Plan. And it has put China’s leading tech enterprises under huge pressure to deliver.

Following years of pushback from the United States and its allies, Huawei’s international operations crossed a threshold in 2020. After stagnating in 2019, its total sales in overseas markets last year decreased for the first time since it began publishing regional data in 2010. The tech giant’s revenue outside China fell 13 percent – and slumped a drastic 24.5 percent in the Americas. Over the past decade, Huawei’s most important revenue stream has shifted from the international to the domestic market (see graphic). 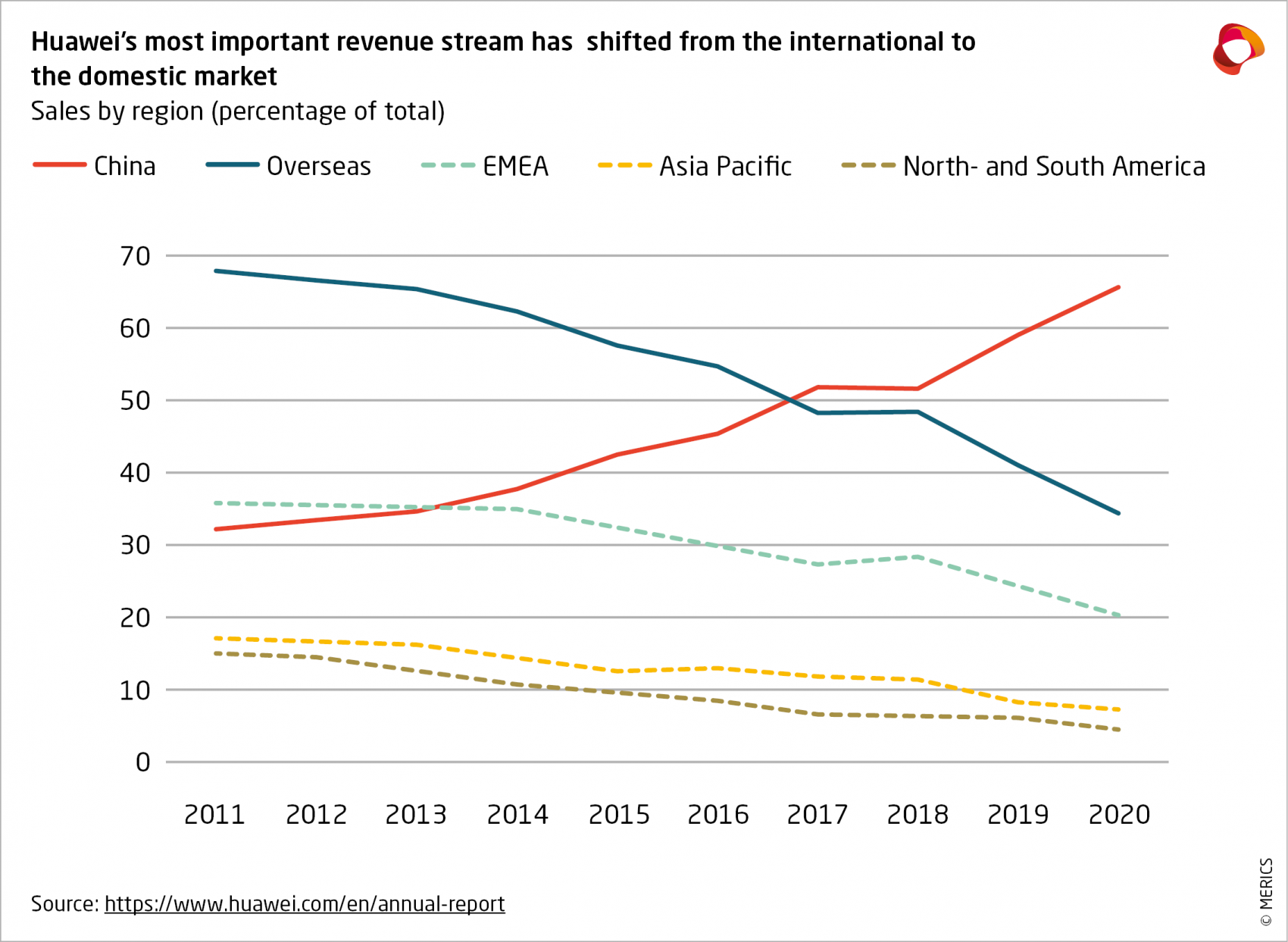 Although the Covid-19 pandemic hit ICT revenues across the board, Huawei fared worse than its competitors. This was most apparent in the consumer segment, which accounts for just over half of total revenues. Last year Huawei was the biggest loser among the major players in the smartphone market, selling 24.4 percent fewer smartphones worldwide, while competitors on average sold only 12.5 percent fewer. As for telecommunications equipment, Huawei’s share of the wireless-equipment market outside China edged lower to 20 percent, while Ericsson and Nokia saw their shares edge higher to 35 percent and 25 percent.

Questions around cybersecurity continued to hurt Huawei’s reputation abroad. The United Kingdom and France last year took steps to exclude the company from their networks, and Germany recently passed a law allowing Berlin to block “untrustworthy” 5G suppliers. Meanwhile, Washington’s 2019 measures to restrict US companies from working with Huawei have been very effective. Google, for example, suspended Huawei’s access to its Android system and Google Apps, consumer favorites outside China. On top of that, doubts about Huawei’s ability to continue operating rose in May 2020 when the United States threatened to block access to semiconductors made using – near-ubiquitous – US technology.

The tribulations of its flagship technology company have given new impetus to Beijing’s goal of securing access to core technologies. Communist Party General Secretary Xi Jinping recently used the party’s leading theoretical journal, Qiushi, to emphasize the need to strengthen technological self-reliance. He described as essential independent and controllable supply chains that remain intact despite political disruptions, and called for speedy advances in indigenous innovation and breakthroughs in core technologies. According to Xi, self-reliance in science and technology underpins the country’s ability to develop further and survive.

These priorities are prominently displayed in the 14th Five-Year Plan, released in March to direct government policy until 2025 and beyond. The document begins with a call to place innovation at the center of China’s development agenda. It pledges more support for frontier technologies such as next-generation AI, quantum computing, semiconductors or neurosciences, and identifies resilient, diversified industrial supply chains as crucial for China to become a manufacturing superpower. In doing so, the plan is meant to spur industrial upgrading and the country’s high achievers in tech to be less susceptible to foreign constraints.

Its firm hold over the economy allows China’s government to direct public firms and prod private enterprises to realize its ambitions. Beijing’s current anti-trust campaign is meant to generate more dynamism and innovation in sectors that tend toward market concentration. It is also a handy cudgel with which to beat China’s private internet giants, should they prove uncooperative in industrial policy. As one academic has noted, Alibaba, Tencent and co. largely owe their success to preferential access to China’s many consumers, rather than innovation in key technologies. The party wants this to change and is now publicly urging them to develop foundational technologies and resolve supply chain vulnerabilities.

Heavy public-sector investment in advanced technologies should ensure that China’s tech leaders continue to grow on their home soil. For example, the country’s state-owned telco operators bought as many as 700,000 5G base stations last year, a boon to domestic suppliers Huawei and ZTE. But China’s traditional trick of giving companies home-market advantages to the detriment of foreign competitors is now playing out in other markets in reverse, as foreign governments keep a wary eye on Chinese players operating overseas.

China’s fraught relations with advanced economies have weakened its claim to privileged status as a developing country in the global economy. As successful as it was, Beijing’s strategy of importing advanced technology to foster local tech champions and then their expansion abroad is no longer tenable. Chinese tech firms will in future have to reckon with restrictions on access to both foreign markets and foreign technology. This leaves Beijing with no alternative other than to push on with its self-reliance drive. With companies such as Huawei on the line, the nation’s prestige as a technological power hangs in the balance.