With just one month remaining until the end of 2021, this is a good time to take stock of a turbulent year in EU-China relations. Tensions between the two actors ran unprecedently high and are likely to leave scars. But even more importantly, they forced Brussels and European capitals to confront the reality of interacting with a more assertive China. Out of this emerged four key trends that defined the EU’s China policy in 2021. 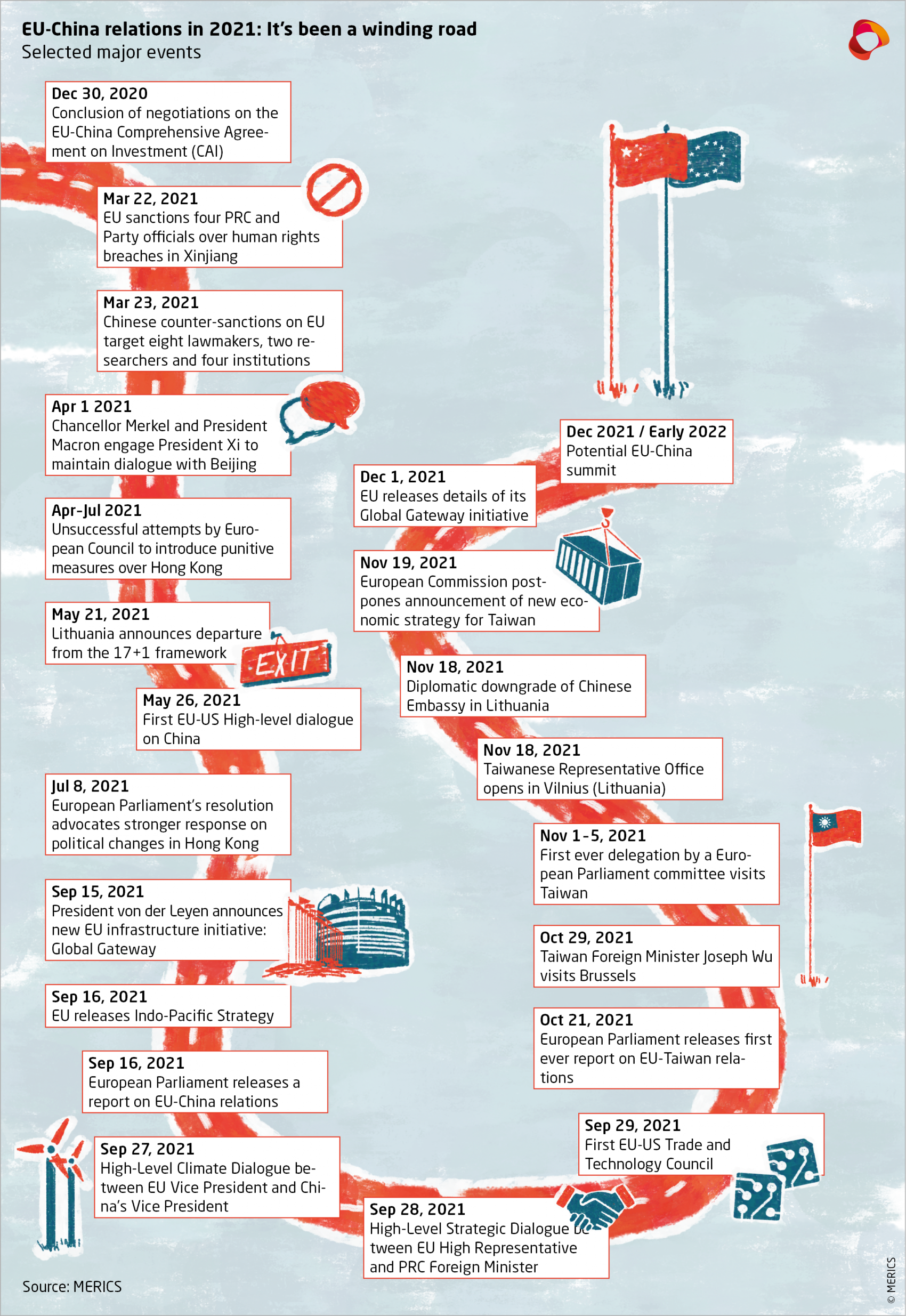 TREND 1: The EU sticks to its multifaceted approach on China, while building up a defensive toolbox

Over the course of the year, some of the leading EU institutions reassessed the bloc’s China policy as defined in the 2019 EU-China Strategic Outlook. The European External Action Service reviewed the implementation of the Outlook’s goals in April and prepared input for an informal European Council discussion on China hosted by the Slovenian Presidency in October. Meanwhile, the European Parliament released a dedicated report on EU-China relations in September. While each of the institutions emphasize different aspects of relations with China, they all agree that the multifaceted approach should remain the guiding framework for EU-China interactions.

There is, however, also agreement that the EU needs more policy tools to address challenges posed by China in the realms of economic competition and systemic rivalry. Through 2021, the EU institutions continued work on policy instruments dealing with improving the bloc’s economic security such as the Anti-Coercion Instrument, the Anti-Foreign Subsidies Instrument, or the International Procurement Instrument. But most are still at an early stage and will have to wait until 2022 or even 2023 to see them implemented.

Other aspects of EU-China relations also saw new efforts to provide responses to existing issues. For instance, going beyond the economic realm, the institutions are seeking to tackle the politically charged issues of forced labor (through the EU Due Diligence Mechanism) or foreign interference (with the Strategic Compass). In parallel the EU has been developing frameworks to intensify cooperation with like-minded partners and to retain and further strengthen the EU’s normative power.

A slow, but growing embrace of geopolitical thinking that bundles issues together in broader strategies is taking shape in Brussels. This is best exemplified by such initiatives as the Indo-Pacific Strategy and the Global Gateway, which both are interconnected with the EU’s China policy.

Despite their overarching support for the multifaceted approach, EU institutions diverged further on which aspects of relations with China to prioritize.

The European Parliament has been increasingly promoting a more critical and values-driven line on China in its resolutions and reports while also exploring ways to expand relations with Taiwan. In contrast, following the downturn in relations between Brussels and Beijing caused by limited direct interactions during the pandemic and the political fallout from the sanctions, the Commission and the Council seem inclined to “re-engage China” and bring positive economic and climate points back on the agenda.

This divergence between the EU institutions could escalate further as some European politicians – including European Council President – explore options to reopen discussions on the Comprehensive Agreement on Investment (CAI), despite political gridlock created by sanctions remaining in place.

TREND 3: Beijing continues to maneuver between Brussels and national capitals

The pandemic had already placed a strain on in-person exchanges between Beijing and Brussels. But following the exchange of sanctions between the EU and China in March, the relationship between the two has dramatically deteriorated. Beijing’s preference for bilateral engagement with European capitals is hardly a novelty of 2021. In fact, it has been a long-standing issue often lamented by Brussels as a divisive practice. This year, China’s approach has continued along broadly the same lines: engage France, Germany and friendly EU countries.

In May, China’s top diplomat Yang Jiechi visited Croatia and Slovenia, two members of the contested 16+1 framework. In October, ahead of the G20, foreign minister Wang Yi made a small tour of capitals that China considers to be friendly including two EU countries: Greece and Italy. In the meantime, China’s president Xi Jinping reached out to Emmanuel Macron. Macron’s ambitions for increased EU strategic autonomy, his reservations towards the United States, and the upcoming French Presidency of the Council of the EU made him an ideal contact and potential key interlocutor for Xi once Angela Merkel departs as German chancellor. By autumn, things were already moving up a gear for re-engagement in Brussels. This trend paved the way for the High-Level Strategic Dialogue between EU High Representative Josep Borrell and Wang Yi and plans for a potential EU-China summit before the end of the year or, more likely, beginning of next year.

Regardless of the EU’s ambitions for strategic autonomy, the competition between the United States and China continues to shape Brussels’ relationship with Beijing. Washington, on its side, has been trying to recover its relationship with Brussels in the aftermath of the Trump administration by seeking to resolve a number of ongoing issues. These include a recent agreement over the famous Boeing-Airbus, and steel and aluminum disputes. The EU and the United States even managed to launch a platform for collaboration on a wide set of pressing issues: the Trade and Technology Council (TTC). However, the doubt remains in Brussels and in European capitals that Washington sees Europeans as a junior partner. The conclusion of the AUKUS alliance between Australia, the US and the UK reinforced this doubt, mostly in Paris where support for Strategic Autonomy is strong. Naturally, Beijing is also a fervent supporter of strategic autonomy, when it comes at transatlantic cooperation expense. Less so when it is China that might pay a price. Furthermore, in Brussels disappointment over the relationship with Beijing runs high as China keeps postponing high-level EU-China meetings to prioritize dealings with the US.

A year that set a new trajectory

Looking back at 2021, the EU has taken tremendous steps forward in shaping a clearer-eyed response to the challenges posed by China. The work is far from done, but the French Presidency of the Council is likely to reinforce efforts in this direction and put its weight behind strategic autonomy and strengthening partnerships in the Indo-Pacific. The new German government is proposing a more decisive positioning towards Beijing too, but whether the German strategic sovereignty aligns with the French idea of strategic autonomy remains unclear.

In the next MERICS Europe China 360° briefing in January, we will look in more detail at what we might expect from EU-China relations in 2022.

Buzzwords of the week

The exchange of sanctions between the EU and China earlier this year destabilized the bilateral relationship. The majority of participants of a survey conducted by Good Judgement Inc in cooperation with MERICS agrees that the sanctions were a targeted action that would not occur again. New sanctions have not been imposed but last week, the EU decided to extend those same sanctions against four Chinese officials and one Chinese entity in March. Thus, confirming the block’s resoluteness on the matter. China has responded threatening to sink the ratification of the CAI, which had already been symbolically frozen by the European Parliament last May. 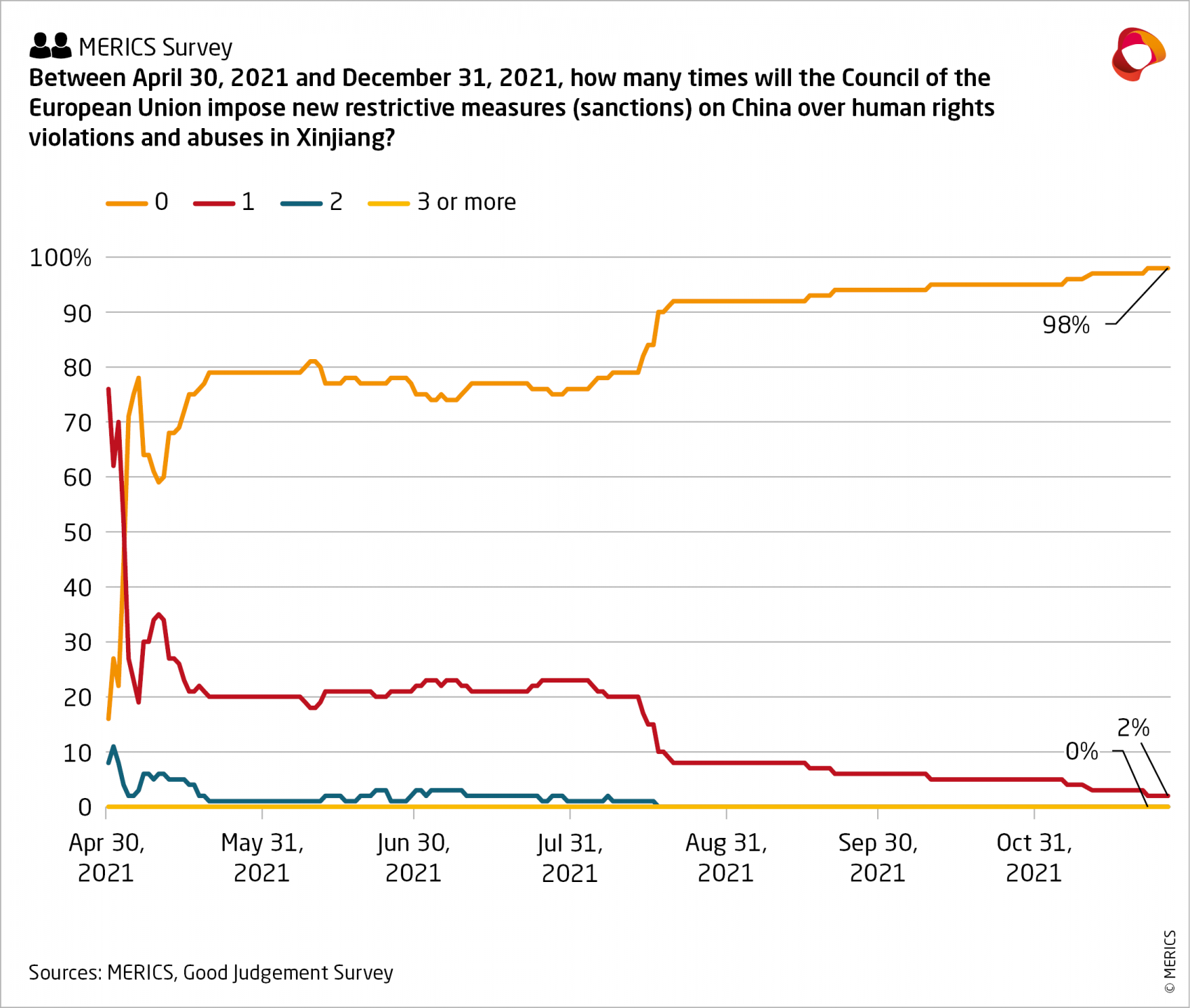 Brussels aims to attract external matching funding for its investments to total EUR 300 billion by 2027, a typical EU funding strategy. On top of development, it is clear that the Global Gateway will follow a geopolitical agenda. Although we will have to wait to see which pilot projects launch the initiative, it’s likely that they will be implemented in countries that hold a strategic interest for the EU.

Last week the German Social Democrats (SPD), Greens and liberals (FDP) reached a coalition agreement paving the way for the formation of a new government. The content of the agreement signals aspirations to adjust the country’s China policy.

The coalition agreement promises a more clear-eyed, realistic, and European approach to China, bringing new language and momentum to debates on German China policy. Particularly noteworthy is the ambition to create a dedicated China strategy. However, those aspirations will still have to be hammered into specific policies, making the coming months crucial for the new administration. This process will likely be complex, but the new government seems to be aiming for a strategic course correction rather than for symbolic gestures with limited substance.

How did the EU FDI screening mechanism do?

On November 23 the European Commission published the first report on the performance of the EU’s screening mechanism for foreign direct investments.

The report comes at a time when the case of the acquisition of the Italian drone-maker Alpi Aviation by the Chinese is back under the spotlight. The acquisition took place before the EU screening mechanism became operational, highlighting a blind spot in the Commission’s knowledge of acquisitions that occurred before 2020, but which can still pose a threat to security and public order. A solution would be for the European Commission to have greater capacity to independently map out existing, as well as incoming, FDI into the region.

Indo-Pacific will be a priority of the French Presidency according to French Minister of Foreign Affairs Jean-Yves Le Drian while EU leaders express similar ambitions at the 13th Asia-Europe Summit (ASEM).

Exim Bank offers a USD 600 million credit line for Lithuania during a US visit from Gabrielius Landsbergis, Lithuanian Minister of Foreign Affairs. The offer is likely a response to Beijing’s economic coercion over intensification of Lithuania-Taiwan relations.

EU spokesperson calls for a “independent and verifiable proof” of Peng Shuai’s well-being after she, accused former Vice-Premier Zhang Gaoli of sexual assault, and has disappeared from the public since.

Hungary will not renew contracts for China’s Sinopharm and Russia’s Sputnik vaccines, but negotiations on creating Sputnik and Sinopharm vaccine factories in Hungary are ongoing.