On Sep 21 it was confirmed that COSCO subsidiary, COSCO Shipping Ports Limited (CSPL), will take a 35 percent stake in Container Terminal Tollerort GmbH (CTT). Antitrust authorities have yet to approve the deal.1,2,3

HHLA, which saw volumes at its Hamburg terminals fall 7.2 percent in the first three months of 2021,4 announced in June that negotiations were underway with COSCO. HHLA hopes that additional traffic and infrastructure investment will flow from a strategic partnership with COSCO, while COSCO seek linkage effects for shipping services through the operation of its own global terminal network.5

COSCO is the world’s third largest container carrier measured by capacity, and the fifth largest port terminal operator in terms of throughput.6,7 It was born in its current form, through the complicated merger, in 2015-2016, of COSCO with its rival, China Shipping Group (CSG), emerging as a formidable national champion.8

COSCO’s ownership structure is a hybrid of state owned and public company. The firm’s global expansion is in line with Beijing’s interests, and its growth has been facilitated by access to state capital,9 though it can be difficult to disentangle COSCO’s political and commercial drivers.

Beijing’s declared ambition of becoming a global “maritime power”10 includes the development of China’s maritime industries and merchant navy – a strategy that is clearly in line with the interests of COSCO’s executives and shareholders.

There are three Chinese companies involved in European ports: COSCO, China Merchants Port Holdings Company (CMP) (招商局港口控股), which is the world’s sixth largest terminal operator, and Hutchison Port Holdings Limited (Hutchison) – a private Hong Kong group that is the world’s number two operator. Of these, COSCO is the most relevant actor – it is the only operator that is also a shipping carrier, and it is the only state-owned Chinese actor with controlling shares in European terminals.

COSCO achieved its ambition of operating its own port in Europe in 2008 when, facilitated by the global economic crisis, it gained a 35-year lease to manage piers 2 and 3 at the Athens port of Piraeus. In 2016, the Greek government sold its majority stake in the Piraeus Port Authority (PPA) to COSCO, as Greece was under pressure to repay debt to the EU and International Monetary Fund.

Although the takeover has not been without controversies, Piraeus under COSCO’s leadership has become the busiest port in the Mediterranean and the fourth busiest in Europe, up from 17th place in 2007.11 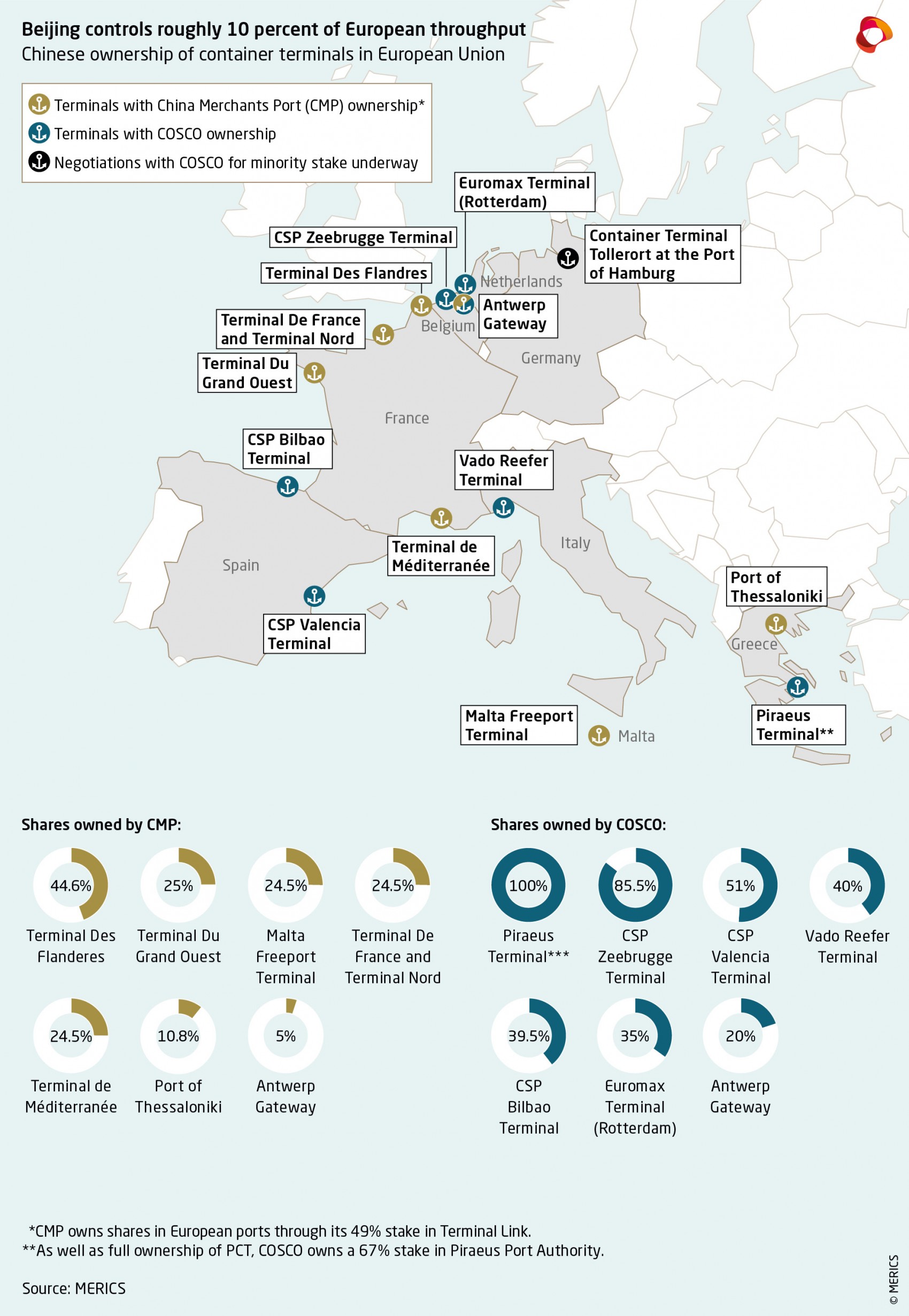 In Europe, the boom in Chinese investments that followed the global economic crisis has given way to wariness and new regulations for screening foreign direct investments. As ports have “critical infrastructure” status, Chinese investors’ interest in them has received special scrutiny.

Chinese firms are in the market for European terminals. Many independent terminal operators see such deals and sales as making sense in order to guarantee cargo flows. Shipping industry consolidation has generated an oligopoly of three shipping alliances with significant sway over the fortunes of European ports. COSCO is a dominant member of the OCEAN alliance, the largest of these three groups.

The trend in shipping is toward greater vertical integration and consolidation. By turning to COSCO, ports like Hamburg are responding to inescapable market pressures. However, these decisions are likely being made with limited consciousness or concern for the wider strategic consequences. COSCO is competing on an uneven playing field with the backing of the Chinese state, and its market dominance is a potential geopolitical tool for Beijing.

This pattern of consolidation may need to be interrupted in order to protect the resilience of European companies. Any measures taken will need to be enacted Europe-wide, as ports will be reluctant to pass up partnership opportunities when they risk seeing the benefits go instead to competing ports in neighboring member states.

You are reading an excerpt of our latest
MERICS Global China Inc Tracker.