Can China afford to lose the EU?

Not right now! There are two critical reasons that explain why China has been so eager to positively engage with the EU during the EU-China Summit of April 1. The first is the high degree of interdependence between the two markets. To mention one example, the European market remains a fundamental destination for Chinese exports and one not easily replaced. If one then considers that China recently set itself the goal of 5.5 percent GDP growth for 2022 while facing economic difficulties, stable relations with an economic partner like the EU become ever more important.

The new waves of the pandemic and the indirect impact of the sanctions on Russia escalate economic instability in China and the fact that the Communist Party of China is preparing for the Party Congress this autumn further enhances the importance of stabilizing the economy and not damaging economic relations with an important economic partner like the EU.
Second, Beijing does not want to see a united West such as that which has responded to the invasion of Ukraine with packages of sanctions. Thus, it still attempts to leverage the differences between the EU and the US by cozying up to the EU and expressing support for EU’s strategic autonomy. China’s central government does not simply use the narrative of division between the EU and the US to further divide the two and weaken the US, but some of its experts seriously believe that the differences between the EU and the US are striking.

Third, and less commonly emphasized is that China is slowly coming to terms with how challenging it is to engage with the new geopolitical ambitions of the EU, and with that it acknowledges the existing and future downturn trajectory of the relationship. However, until then, it still views the EU as a positive partner. Huang Jing, distinguished Professor at Shanghai International Studies University, argues:

"In order to effectively control the Sino-US "competition" provoked by the United States and maintain the external security environment that is indispensable for China's sustainable development, China must maintain good and stable relations with all countries in the world, especially European countries."

Zhang Xiaotong, Professor of the Belt and Road Initiative & Global Governance Institute at Fudan University, is of a similar opinion, stating that:

"China should carry out "positive energy diplomacy" between China and the EU."

According to Jian Junbo, Associate Professor at the Center for China-EU relations at Fudan University, the war in Ukraine has enhanced the importance of the EU:

"It is necessary to increase investment in Europe and actively strengthen exchanges with Europe. For China and the United States, the Russo-Ukrainian war has greatly enhanced the strategic value of Europe. [..]China should actively seek cooperation with the EU and welcome a united and prosperous Europe. After all, the stable and positive development of China-EU relations are of great strategic significance to China's peaceful development and even to the peace and stability of the entire world."

Thus, China’s experts on EU-China relations indicate how China does not view the EU as lost nor does it want to lose it. As for the EU, although the relationship with China has become increasingly difficult to manage, and the assertive shift in the EU’s approach towards China is a welcome outcome, there is still a window of opportunity to positively engage with China, which should not be ignored.

Why Chinese scholars are hoping for Macron’s re-election

President Emmanuel Macron and his far-right opponent, Marine Le Pen, will face each other for the second time in France’s presidential runoff next week. A victory for Le Pen might be good news for Russia, but not for China. Chinese scholars support Macron for his ability to help strengthen and shape the EU’s push towards greater strategic autonomy.

Macron’s popularity among China’s intellectual elite is high. So much so that it is difficult to find meaningful criticism of his policies, either domestic or foreign. From the Yellow Vests protests to COVID, France has been through a lot in the past five years. Yet despite his country’s oft-cited general “decline”, Macron’s efforts to put France back on the right track continue to be lauded in China.

His personality plays a part in this. Macron embodies much that the Chinese admire in a civil servant. He is the perfect scholar-official à la Française. Macron is often described as well-educated, highly capable and pragmatic. More importantly, he is regarded as friendly towards China. “His book ‘Revolution’ … is full of praise for China,” (对中国赞不绝口) comments Song Luzheng, a researcher at Fudan University. What’s more, Macron’s past warnings against the formation of an anti-China coalition are cited as proof of France’s favorable intentions. “Macron never rejects China in his grand strategy, but rather emphasizes cooperation with China and flexibility in his approach to it,” write Wu Yiwen and Wang Shuo, two professors at Beijing Foreign Studies University.

Macronian neo-Gaullism is in line with Chinese interests

Chinese scholars describe Macron as a leader with a vision — the rightful heir to Gaullism. His approach to foreign affairs is described as “Macronian neo-Gaullism” (马克龙版新戴高乐主义), “flexible classicism” (灵活的古典主义) or as a new type of multilateralism (马克龙新多边主义外交). “Macron's new and innovative multilateralist diplomacy has already attracted international attention and has, to some extent, been welcomed and accepted by the international community,” argues Wu Guoqing, a researcher at the Chinese Academy of Social Sciences (CASS). Many also salute his efforts to transform France into a “balancing power” (puissance d'équilibre) that is not afraid of engaging with American foes like Russia or Iran.

Macron’s approach to foreign affairs is regarded as compatible with China’s own vaunted concept of “genuine multilateralism” (真正的多边主义). Both are said to oppose unilateralism and hegemonism. Both claim to promote multipolarity and globalization. And both supposedly aim to strengthen global governance and international law. Crucially, according to Wu, France seeks to “de-ideologize“ (去意识形态化) international affairs. This, of course, is of great appeal to China. The one point of contention, however, is France’s advocacy of “minilatéralisme”, whose “small clique mentality” Beijing has previously condemned.

China is turning its attention to France

But China’s main interest in Macron lies not so much in his influence over France as in his ability to shape the EU. Chinese scholars hope for Macron’s re-election because they believe that he — and certainly not Le Pen — is the one leader in Europe most capable of strengthening the EU and pushing it in a direction more favorable to China’s own interests. That is, increasing every aspect of the EU’s strategic autonomy and thus independence from the US.

Since Angela Merkel’s announcement in 2018 of her intention to step down, attention in China has gradually been turning towards France. As Zhang Ji, an academic at Fudan University, recently stated, “The ‘German-French axis’ is shifting to a ‘Franco-German axis’. The role of the leading power in the EU is once again returning to France.” This is echoed by other foreign policy experts in China. Simply put, Germany remains the EU’s core engine, but France is increasingly portrayed as its key strategist. Or as the influential analyst Cui Hongjian puts it, “Paris has ideas but it lacks money … France may play a leading role in strategic vision, security and diplomacy, but it needs Germany's strong cooperation to promote specific issues.”

Macron, France and their Gaullist vision of the world, are therefore increasingly seen as the way to stave off a potential US-led grand coalition against China. That said, the Chinese are under no illusion that they could find an actual ally in the EU, France or even Macron. They are fully aware that Europe is culturally and politically too close to the US for that to happen. But they do believe in the possibility of encouraging the EU to adopt a more French-like — and thus US-sceptic — type of neutrality. Le Pen with her “populist”, “erratic” and “anti-European policies” (反欧的政策) would undermine such plans. The Chinese elite will be voting Macron next week. 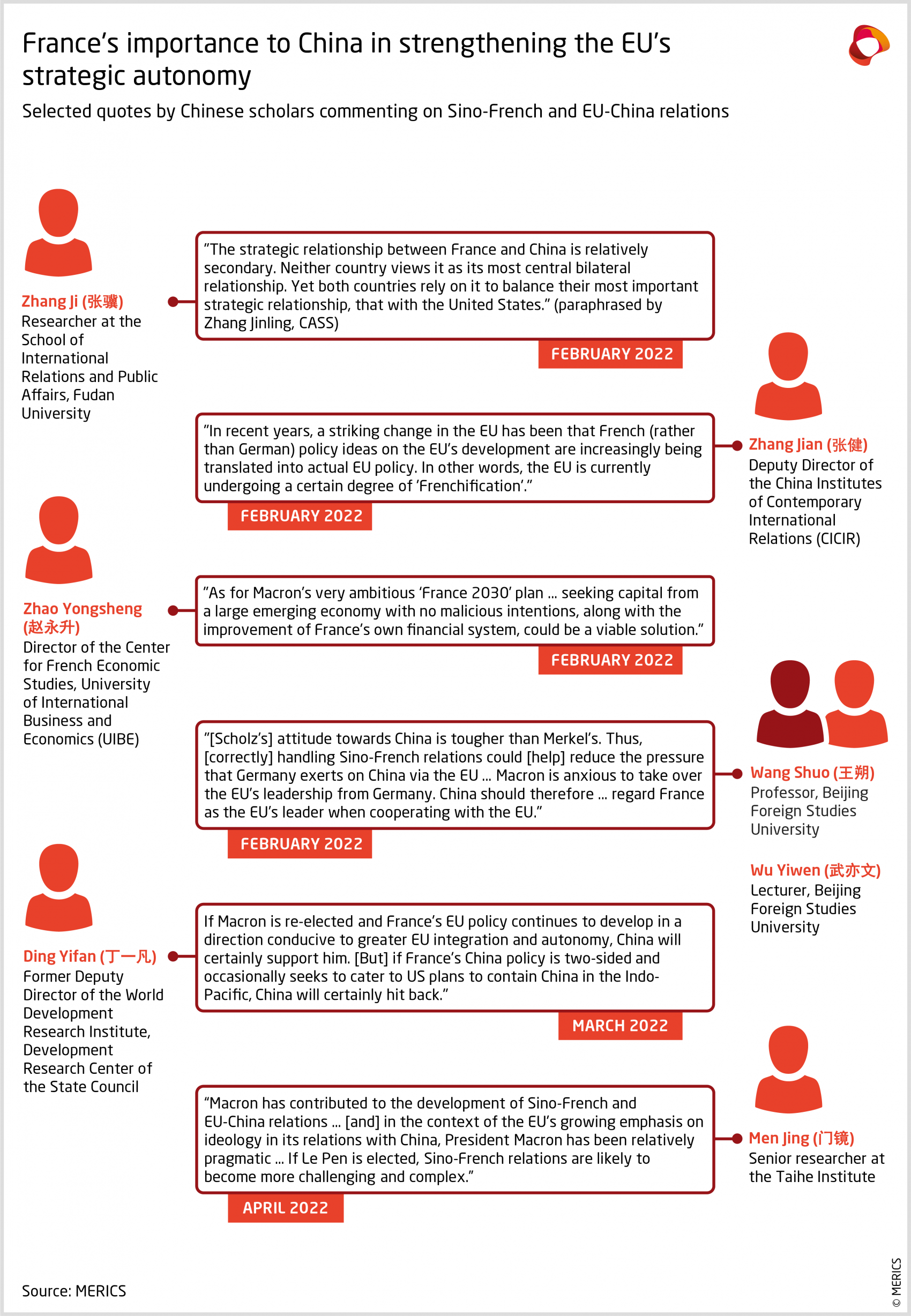 Last weekend, China quietly delivered air defense missiles to Serbia. The delivery appears to have been agreed upon before Russia invaded Ukraine. Yet, the fact that China sent six Chinese Air Force Y-20A transport planes to Serbia to deliver missiles is no small matter. First, China is contributing to arming Serbia, a country in the EU’s neighborhood and a longstanding friend to Russia. Second, China’s planes have made a long-distance delivery, raising questions over China’s future ambitions in the region. Whether the delivery to Serbia amounts to an important step in China’s role in the Balkans will depend on how isolated this episode remains.

On April 1, the UK government approved the acquisition of the semiconductor manufacturer Newport Wafer Fab, located in south Wales, by Nexperia, a Dutch subsidiary of the Chinese company Wingtech. However, since then the final decision has been put on hold.

Quick take: Although Newport Wafer Fab’s technology is not cutting-edge that does not mean that its acquisition should not immediately be discarded as a matter of national security. Relevance to national security should not be weighed exclusively on innovation but also on supply. The fact that a producer has contracts with a country’s defense apparatus and that it is one of the few producers available should be reason enough to consider blocking an acquisition.

On April 7, following the atrocities committed by the Russian army in Ukraine, the Ukrainian ambassador to the UN presented a resolution to suspend Russia from the United Nations Human Rights Council (UNHRC). The resolution passed with 93 votes in favor, and Russia was suspended.

Quick take:
Since China sees the concept of human rights enshrined in the UN Charter as Western-formulated, it was never going to abstain on this vote as it had previously. In this regard, the reopening of the EU-China dialogue on human rights should be interpreted as a sign of China’s will to foster a relationship with the EU as positive as realistically possible rather than as an actual commitment to improving human rights conditions within its borders.

Beijing is planning to ratify two forced labor related International Labor Organization conventions in a move linked to the Comprehensive Agreement on Investment. The decision is unlikely to unlock the possibility of CAI ratification by the EU as bilateral and geopolitical concerns remain in place.

The European Commission is planning to run this year’s edition of the European Development Days between June 21-22 with the key focus on its Global Gateway, a development initiative oftentimes described as the EU’s response to the Belt and Road Initiative.

The first ever mission of Swedish lawmakers to Taiwan commenced with a 5-day visit to the self-ruled island on April 10. MEP Charles Weimers, the rapporteur on relations with Taiwan at the Committee on Foreign Relations, was among the participants.

On April 3, China-friendly Fidesz party won a fourth consecutive majority of seats in Hungary’s parliamentary elections, securing another term for Viktor Orbán. The election could have had a significant negative impact on Chinese projects in the country, as the opposition vowed to review the controversial Belgrade-Budapest railway and Fudan University Budapest campus projects.

Scheduled to open in 2022, TikTok has now delayed the opening of its data center in Ireland, its first center within the EU, until 2023. The company is currently storing European users’ data within servers in Singapore and in the United States, while its European “transparency and accountability center” operates online.